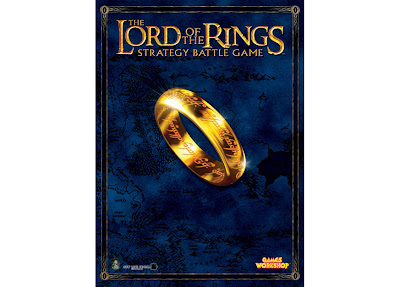 Three Rings for the Elven-kings under the sky,
Seven for the Dwarf-lords in their halls of stone,
Nine for the Mortal Men doomed to die,
One for the Dark Lord on his dark throne,
In the land of Mordor, where the Shadows lie.
One Ring to rule them all, One Ring to find them,

One Ring to bring them all, and in the darkness bind them,
In the land of Mordor, where the Shadows lie.
I was in the 7th grade when I was introduced to the Lord of the Rings by J.R.R. Tolkien and I have never looked back. Other fantasy works have come and gone, but Tolkien's tales have never gotten old and I have cheerfully re-read them through the years.
Cinematically, the tales haven't fared too well. When I first saw the animated made for TV version of The Hobbit as a teenager, I thought to myself, "this is great!" The music, the dwarves, the giant frog people that lived in Mirkwood forest - WHAAATTT? Who the heck came up with the artwork for those wood elves? They looked like some sort crazed versions of hunchbacked giant Yoda creatures that spoke with German accents. What the - ?
Then in college, Ralph Bakshi's animated The Lord of the Rings came out. Probably the less said the better. How many weird, cheap animation tricks can you put in one movie? Especially as it looks like he ran out of money?
Rankin Bass comes back (they did The Hobbit) with the made for TV, The Return of the King, which takes up where Bakshi's movie ended. If you didn't see Bakshi's movie or aren't familiar with the story . . . well . . . Anyway, the music was good - who could forget the Orcs singing, "Where there's a whip, there's a way!"
Then I heard a new movie was coming out - live action. I was horrified; what cinematic disaster was approaching. To my great relief, Peter Jackson did it right! Games Workshop also made a sharp move for getting the rights to use the movies as the basis for several games. Which brings me to their The Lord of the Rings Strategy Battle Game.
Don't be fooled by the title, it is not a strategy game. On the other hand, it is a very good and enjoyable (and not complicated - great for the kids) skirmish game that lets heroes and evil villains be heroes and evil villains! Figures are mounted individually (hey, it's a GW game!) and can fight in groups, move around, shoot, jump, cast spells, etc. Rules cover shooting and ranged attacks, hand-to-hand fighting, different sorts of weapons, banners, monsters, and how to use heroes: the guys that are stern, mighty and dangerous. In fact, if you are playing the forces of good, you better know how to use your heroes as odds are you will be outnumbered (just like in the books).
Heroes are on both sides, both the good (Aragorn, Gandalf and Legolas for example) and the bad (Nazguls, Saruman and Uruk-hai Captains). The game has a novel way of representing the hero's characteristics: Might, Will and Fate. Heros will have points in the categories depending on which character they are. Might represents a hero's ability to do . . . well . . . hero stuff. A hero can spend a point of "Might" to adjust a die roll. If he or she needs to hit that Troll now and misses with the die roll, a might point could save the day. In the rules Might can influence the characters shooting, fighting, causing wounds, courage, skill tests, etc.
Will represents the hero's ability to employ or resist magical powers. Remember how long the Ring takes to affect a hobbit? Fate deals with destiny. Fate points can be used to recover wounds - even though I just fell 30 feet off that tower it was only a flesh wound!
All of the figures for the range are based on the imagery of movies. Most of the figures were designed by the Perry Twins and they are "true" 25mm figures - and great figures they are. As usual, GW has painting guides, terrain making guides, etc., that are a hallmark of their rules.
GW has recently published their War of the Ring rules for large battles. This is GW's game to play larger battles of the War of the Ring. GW made a good call by having the rules compatable with their current range of figures. They are selling unit bases that the figures can fit on top. If you don't want to use their bases, just cut out your own out of cardboard or balsa wood. I hear the rules are fun to play; at the current price retail price of $57.75, I'll need to wait a while to try them out!
Coming up soon will be a battle report that takes place near the Old Forest Road between the Misty Mountains and Mirkwood Forest. During the War of the Ring, a small settlement of men are attacked by forces of Evil including orcs, Uruk-hai and a fearsome troll. Not all will be lost however; the elves of Mirkwood Forest are coming to the rescue. I of course will be leading the Forces of Evil ("Bwah Hah Hah!") and Honorable Son #4 will lead the men and elves.
Posted by Neil at 12:21 PM