The internet has been a great resource for wargamers and I recently had the pleasure of "meeting" in the blogosphere Mr. Graham Evans. Graham is the author of Sepoy, one of my all time favorite wargames rules. Based on the English Civil War rules File Leader, by Pete Berry, the action is based around the company which is represented by six figures for infantry and three for cavalry. Due to the command and control system, Sepoy is an ideal multi-player game as one player can represent the mutineers (and will probably "lose" the game) and the other player or players will have officer figures representing them and their command and control on the tabletop battlefield.

Now I put "lose" in apostrophes on purpose; even though the mutineer player will probably lose they can have a lot of fun doing so! The pressure is on the British players to win with minimal casualties as their forces in the game and historically are much smaller than the mutineers. 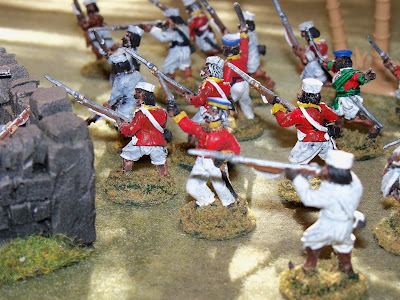 One of my favorite features of the game is the Incident table. The Incident table affects the British officer figures on the table and their casualties can be quite dramatic and worthy of mention in dispatches! If the British players are not careful, their will be no heroic figure left with the stiff upper lip to lead Victoria's forces to victory. 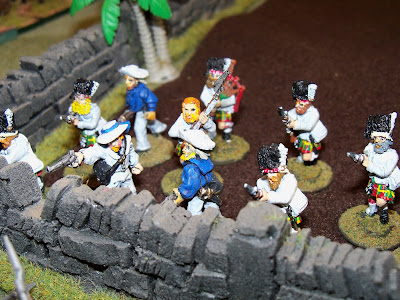 The rules can cover every action that I have read about the mutiny from raids, open field battles, siege actions, escort duty, etc. Games are supposed to be fun and these rules fit the bill.

If you want to read how the rules came about, you can read about it here at Graham's blog Wargaming for Grownups.
Posted by Neil at 1:36 PM