I have been tempted by the Gripping Beast line of figures for a long time and when I read an Dux Bellorum article in Wargames Illustrated # 299 that featured at the end of the article how to build a Late Saxon era and Viking army with 2 boxes of Gripping Beast plastics I knew that this is what I wanted to do.

Honorable Son #5 wanted to participate in our latest project of gaming the Dark Ages leading Vikings; however, he prefers skirmish games like Games Workshop's Lord of the Rings.  I told him about Saga but after looking at the price, I was not ready yet to spend the money to invest in the rules and build armies just for Saga. I did want to build a Viking Army and Late Saxon era army that could use both Dux Bellorum and a skirmish game to be named in the future. Fortunately I am a guy that likes to read rules over and over and over again to get inspiration and then I saw it!  On pp 8 of Dux Bellorum there is a picture of a unit with individual figures mounted and put on a base that could hold them securely for Dux Bellorum.  It did not take me long to scour all of the local hobby stores and buy every movement tray developed for GW's War of the Ring. 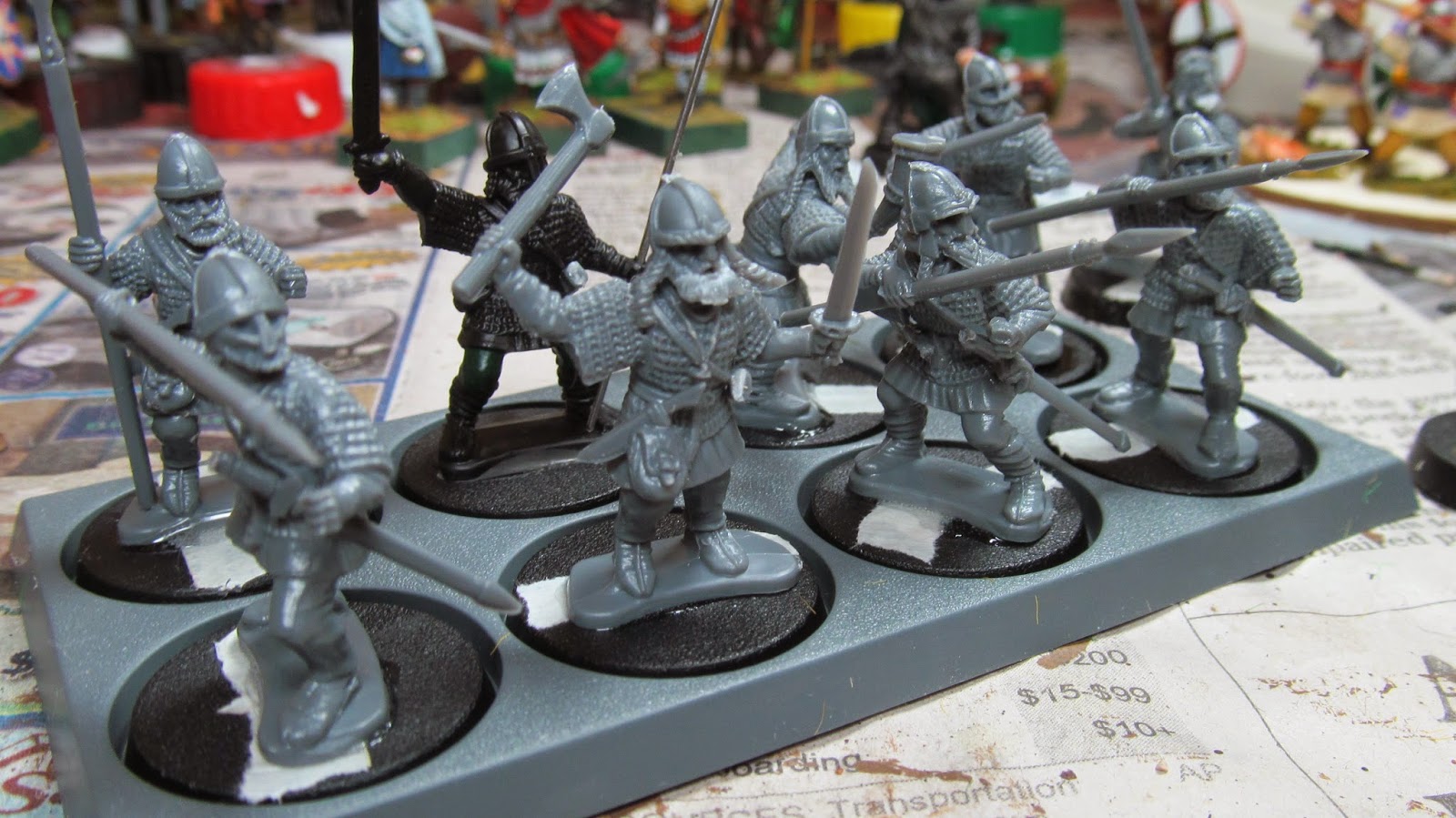 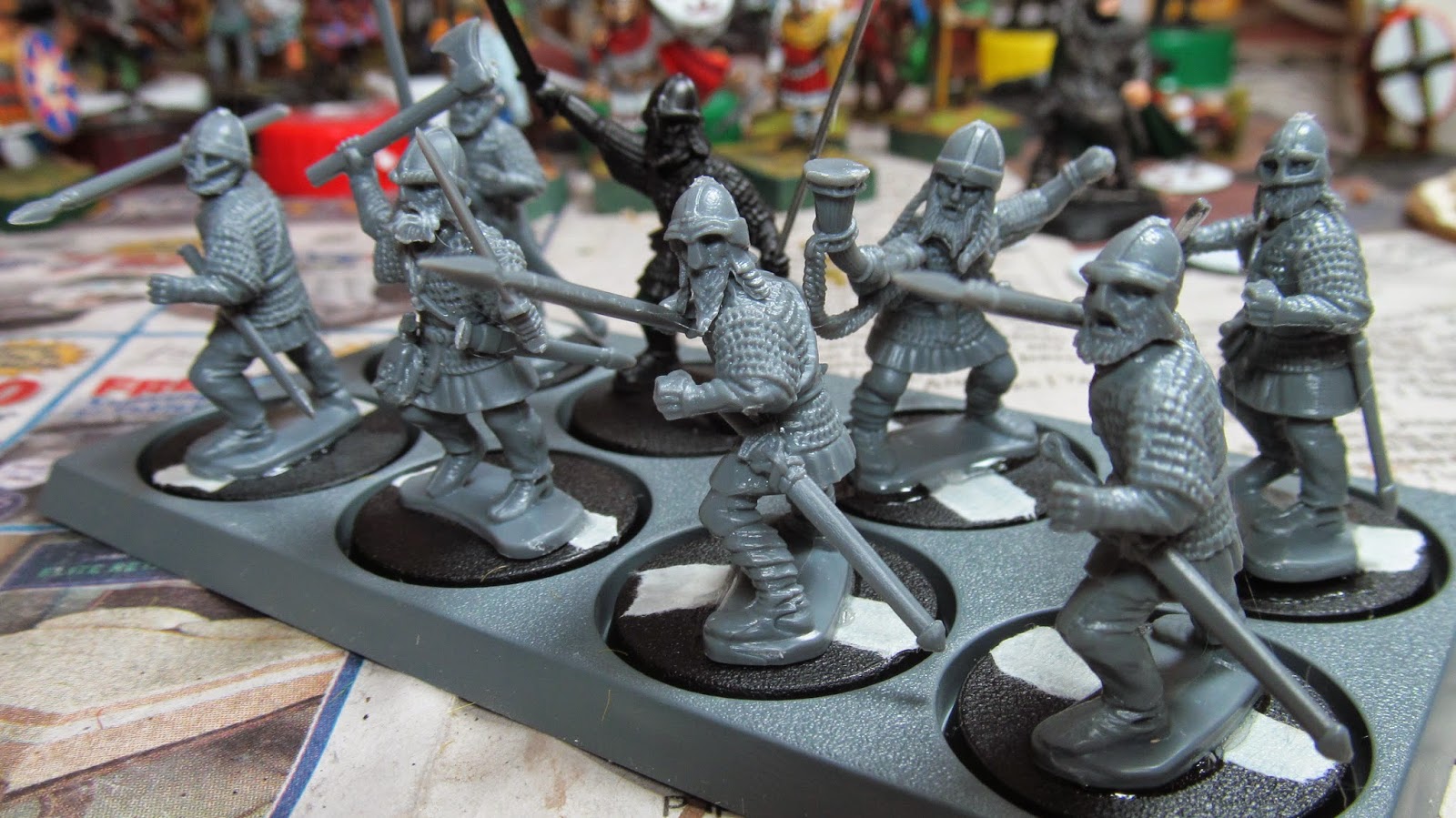 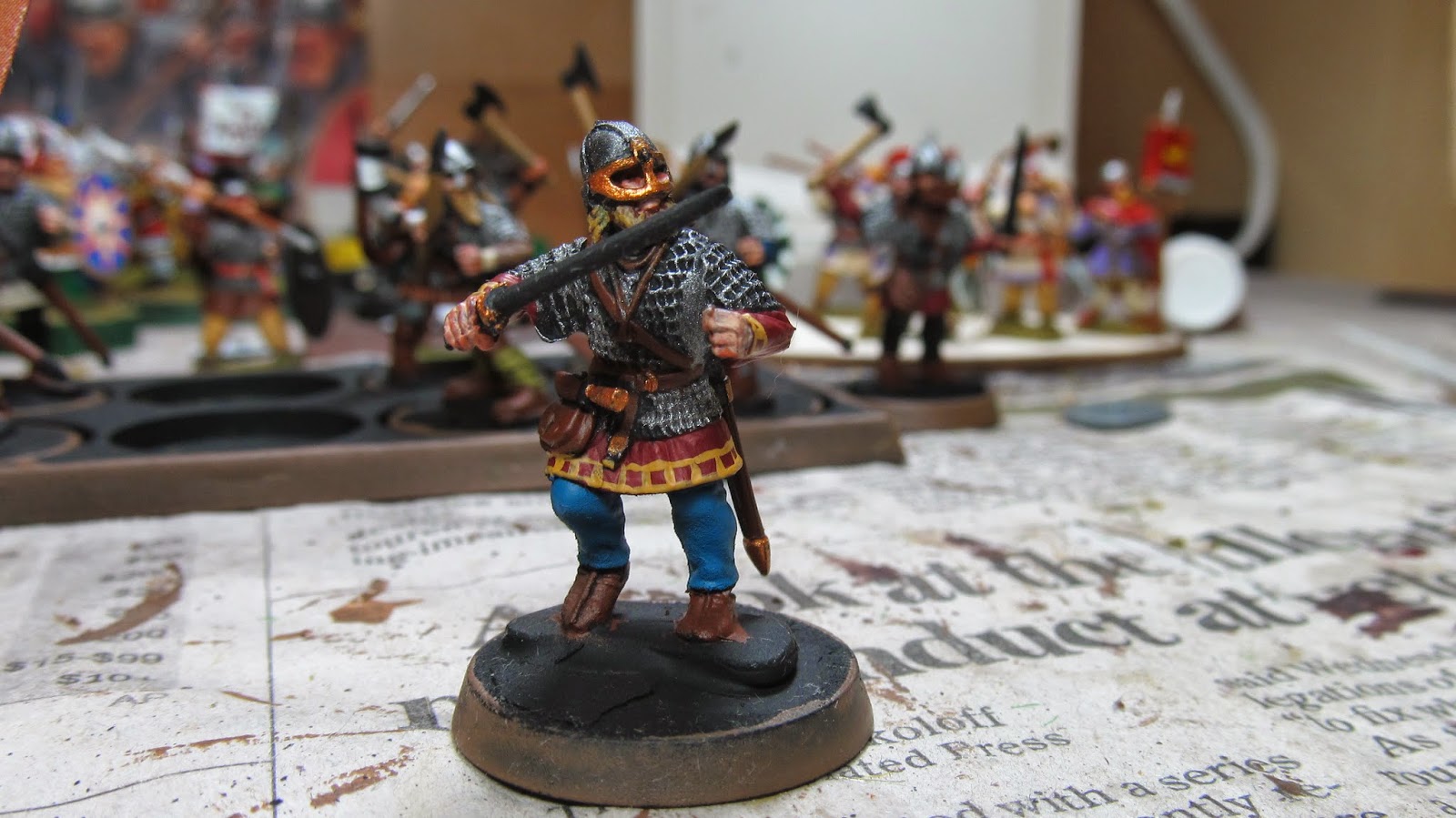 I use masking tape to cover up the slots on the bases. An example of a figure that can be made. 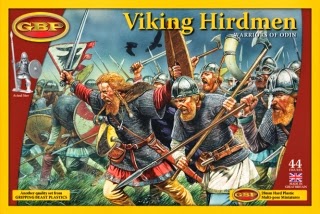 Anyway . . . the plastic Vikings are a joy to assemble and easy to paint as the detail is incredible. I am not great at conversions, but I have already converted a figure as a standard bearer and was able to cut and reposition some arms, swap weapons, etc! 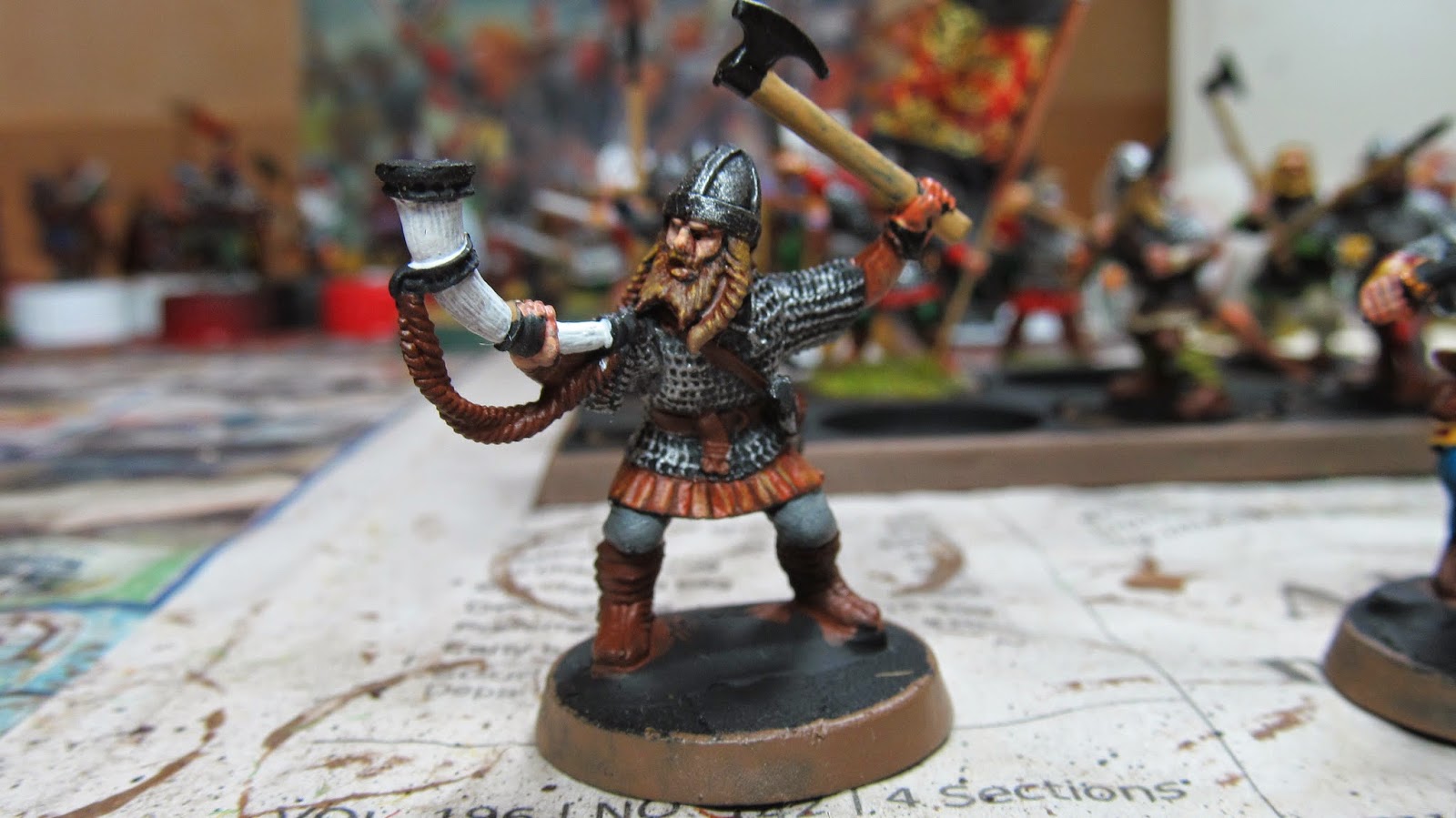 That's a big horn.  Horn from command sprue and the body is from "regular" sprue.  The left arm is also from the command sprue and was configured to hold a shield.  I carefully cut off the hand and added a hand holding an axe.

There are 44 figures in the box with 2 command sprues with 2 figures each and 4 regular sprues.  The regular sprues have 10 figures with 14 heads and a gazillion weapons and shields. There are also 4 paper banners that are small but fit on spears to add some variety.  To add to these I will be converting some figures as banner men and downloading banners from the web. Easy to make unique figures for your Viking forces. 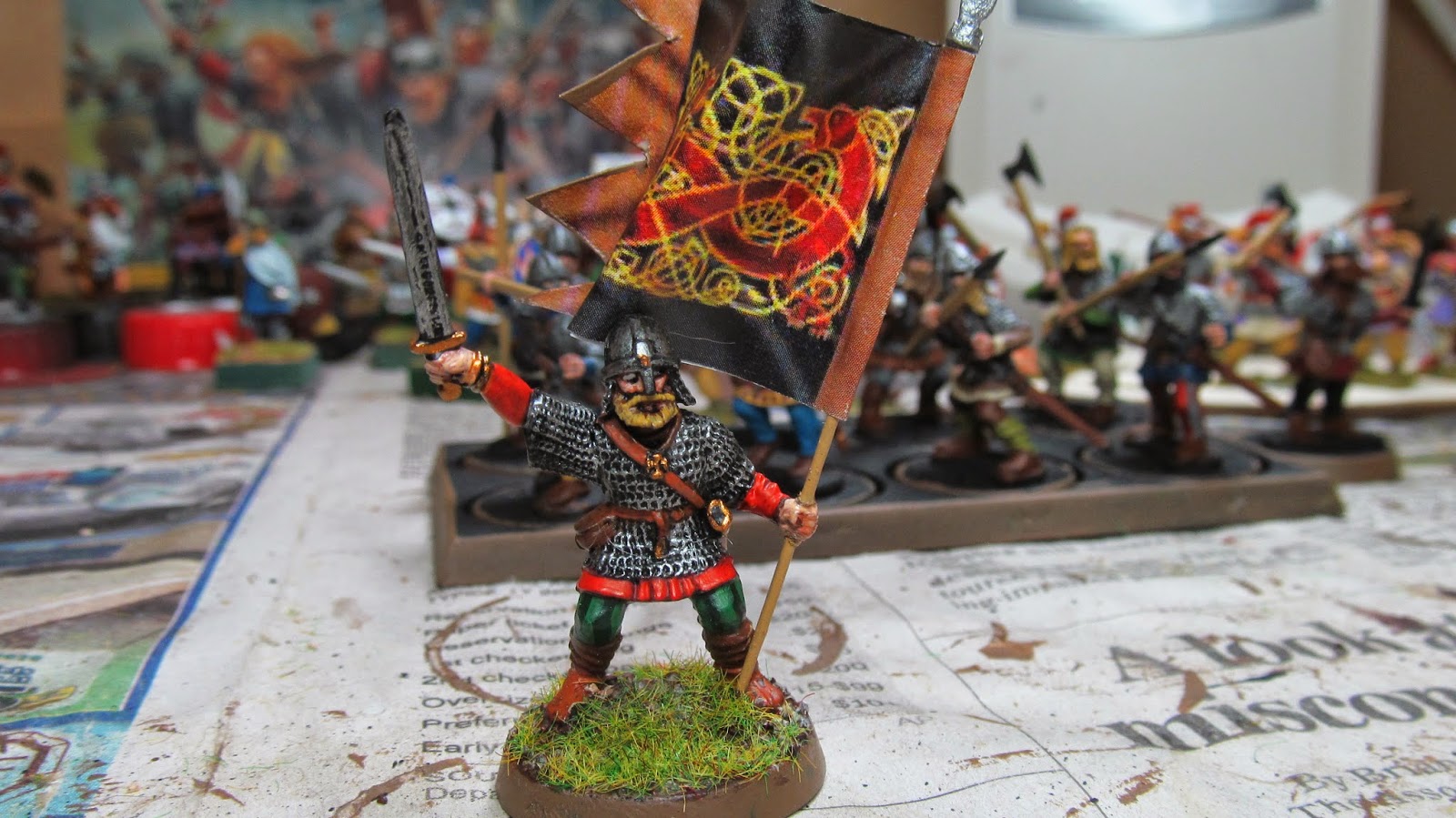 Converted banner man. The right arm is from the command sprue while the other arm is from the "regular" sprue.  I drilled a hole in the hand and inserted a wire spear with a paper banner I downloaded somewhere on the internet.  He will eventually have a shield on his back.

When Honorable Son #5 saw Ragnar Lothbrok he knew in his own Viking heart (it's the Norwegian blood in him) that Ragnar would be his leader of battles.  Ragnar is an impressive figure.  At first I though Ragnar was an example of scale creep but after doing some research I found out that he was made to be a taller, "heroic" type character in the Gripping Beast line. It's nice to see a figure that reminds us that not everyone is the same size.  He will definitely be an imposing general with his loyal hearthguard around him. 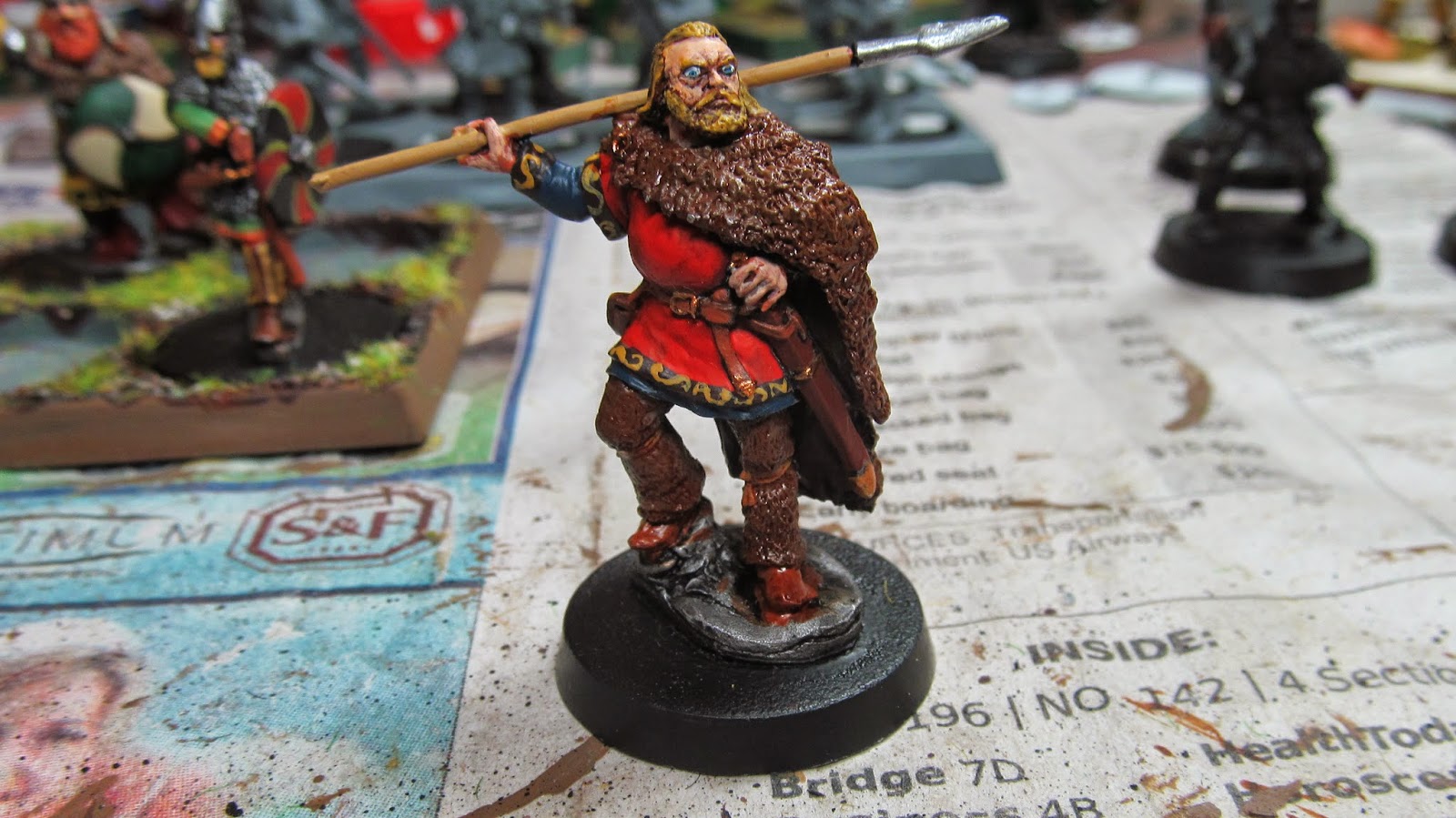 Ragnor gives the enemy his "Gaze of Intimidation"  . . .  I have to work this into the rules somehow since I gave him an interesting set of eyes!

Ragnar's companions as a work in progress.  Each stand will have 8 figures and I will use banners to denote companions and "noble".  The ordinary warriors may get the small paper banners that came with the boxed set.  Of the below figures, only the guy holding the two-handed axe is plastic. 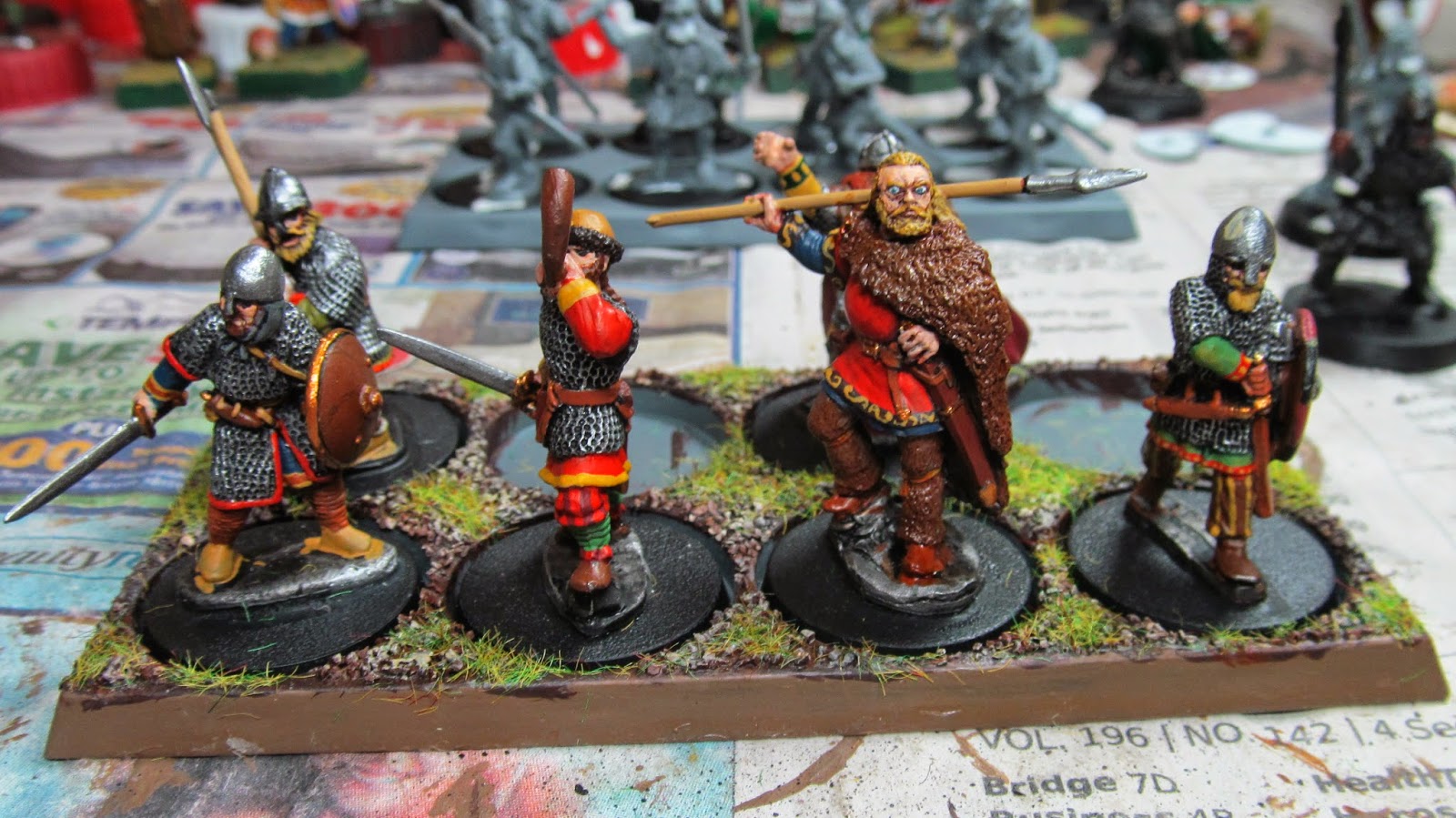 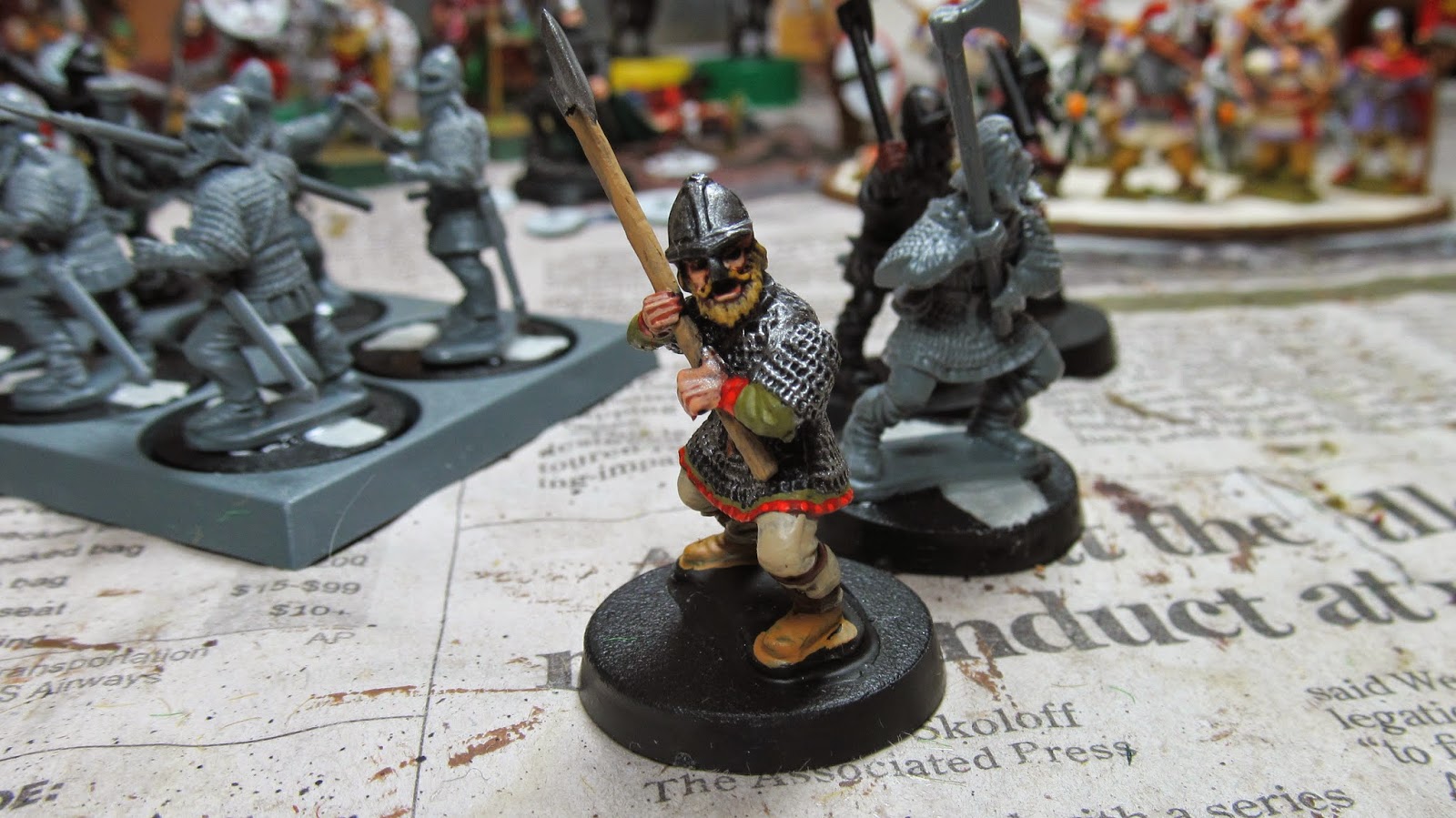 Plastic two-handed axeman that will be part of Ragnar's companions.

Here is the completed unit of Companions and Ragnar's steely eyed gaze. 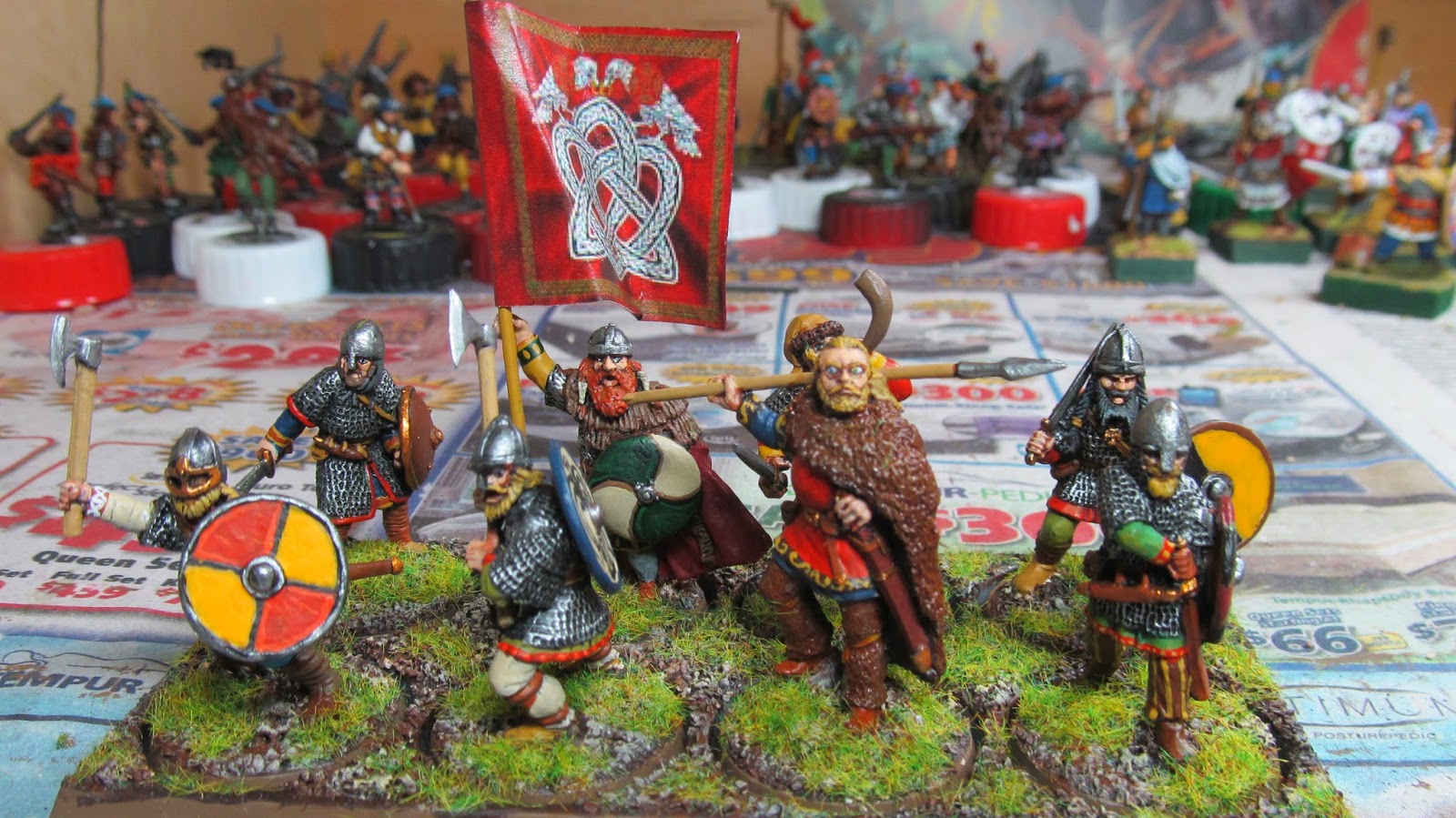 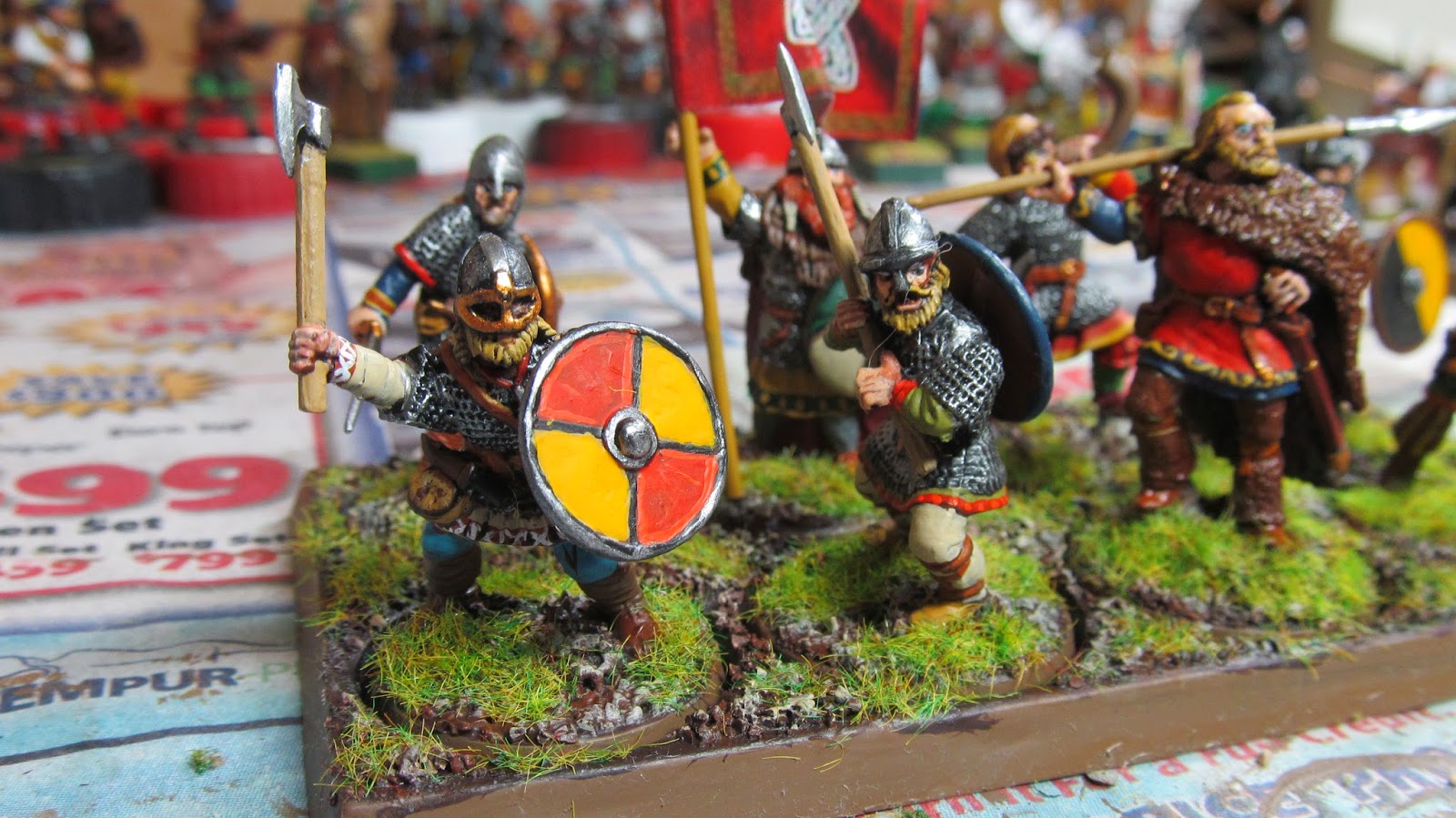 I am really having fun with these figures and units.  Eventually the "core" Viking Sea Raider army will consist of a Foot Companions unit with leader (Warriors of course!), four Noble Warriors and one ordinary Warriors making a small but elite strike force to raid Dark Age Britain.

Here is the next unit as a work in progress with more to come. 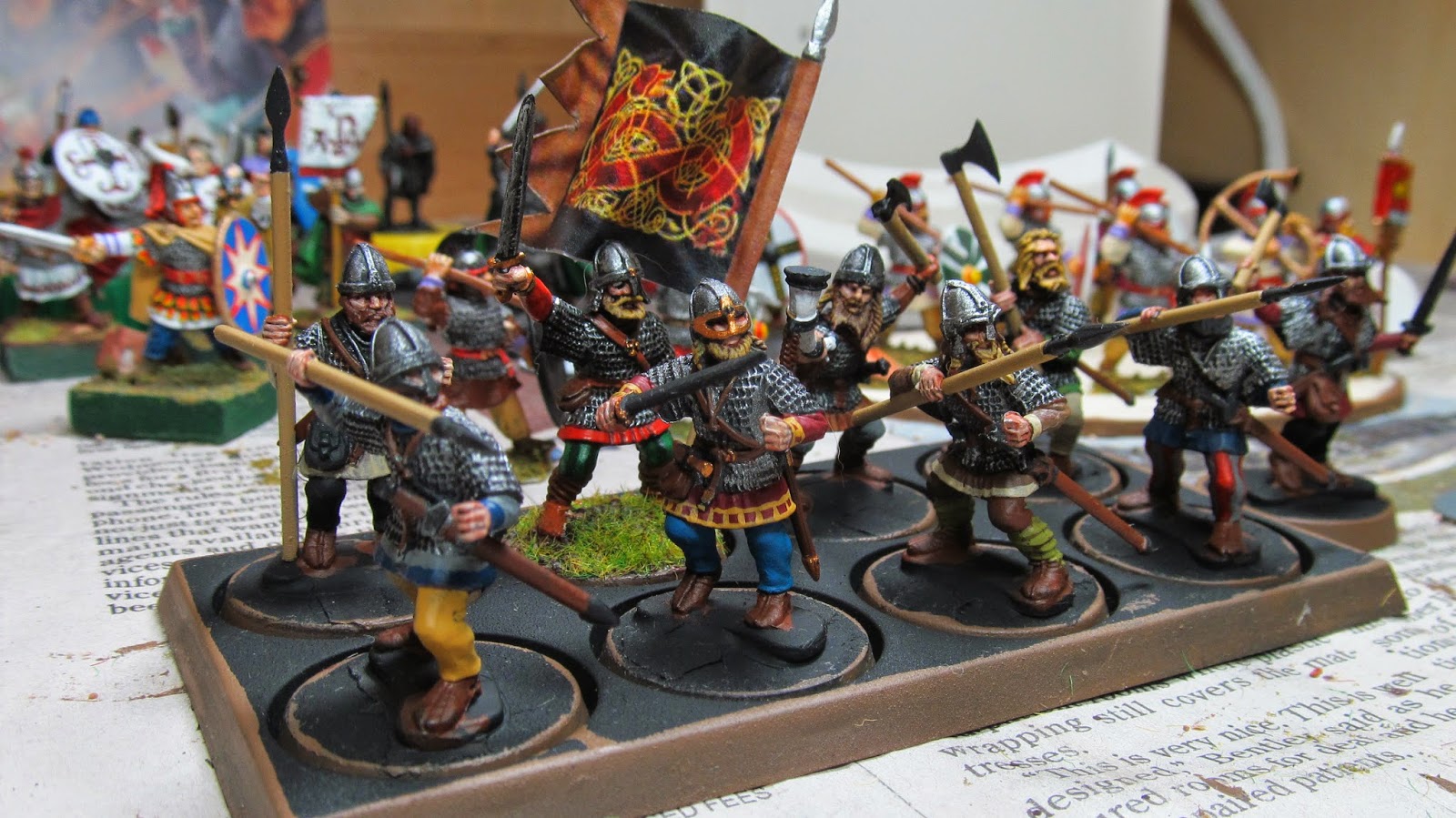 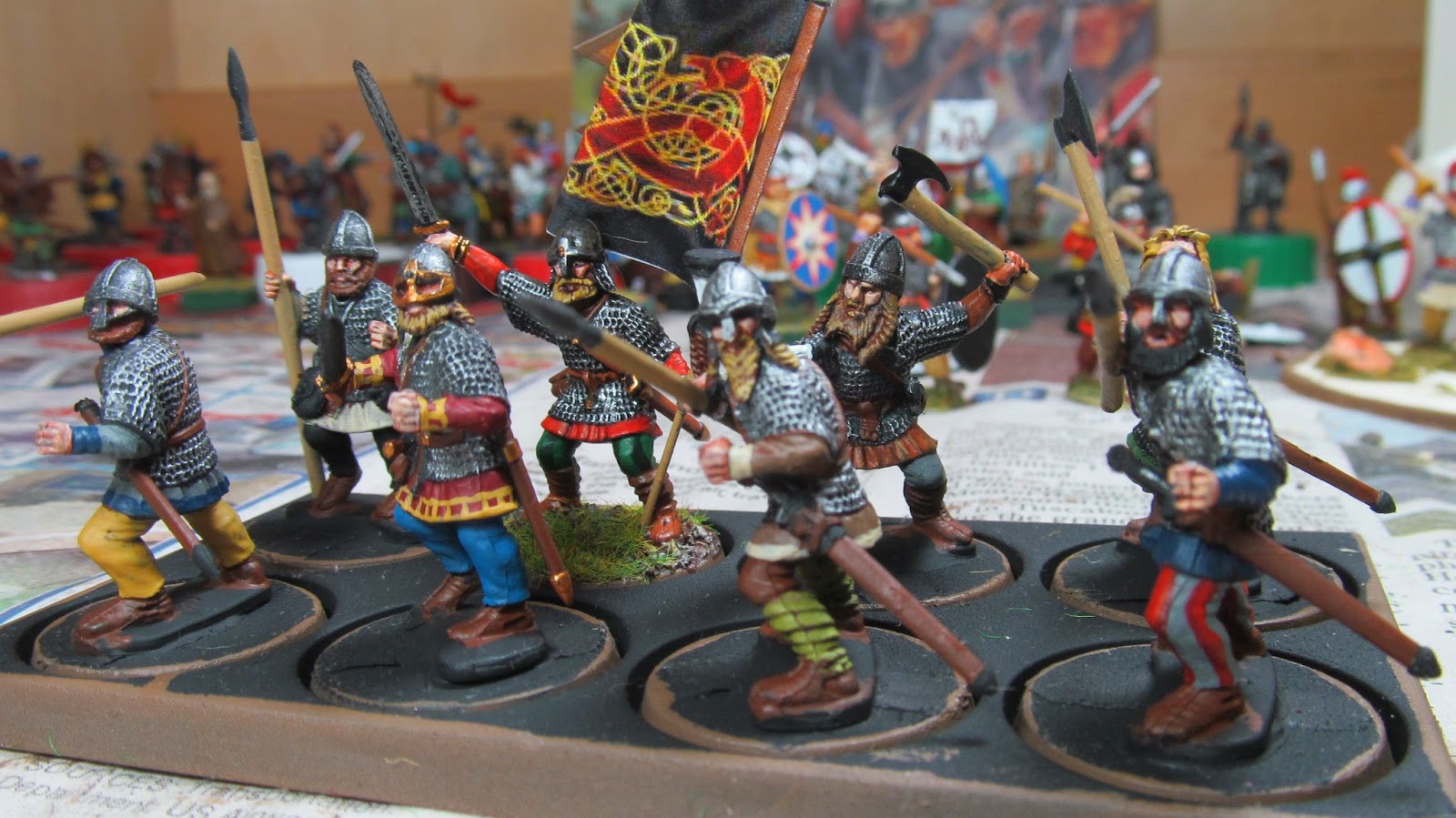 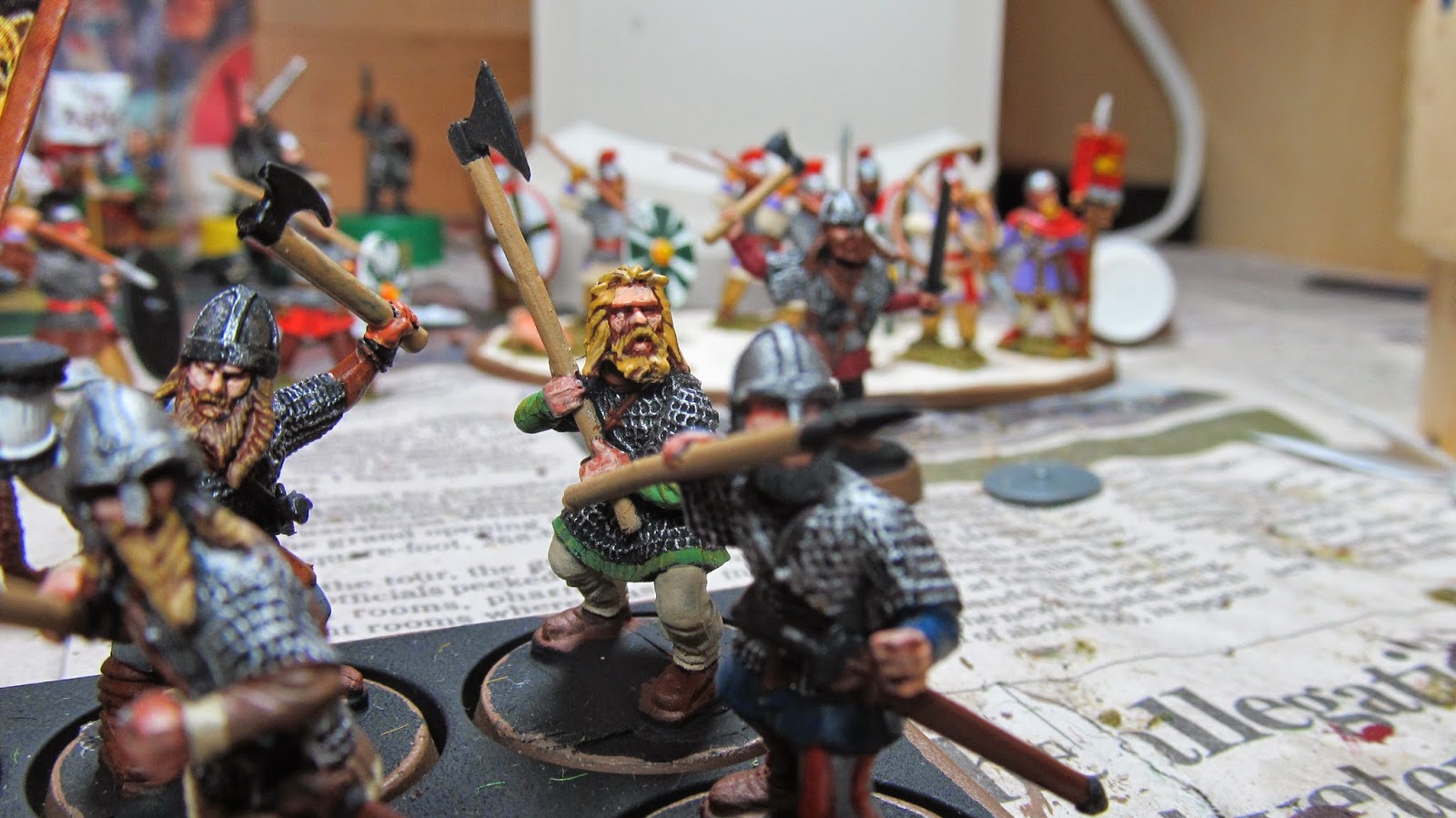