Alright! Time to break into the new box of Perry Brothers Miniatures' French Napoleonic Dragoons 1812-1815. Perfect timing for my French Army of the Napoleonic Peninsular Campaign. The box (all for a fantastic price of $29.99 from TheWarStore.com) comes with 13 mounted dragoons, 8 dismounted dragoons, 3 French infantry casualties, 3 British infantry casualties and various packs, muskets and shakos (hats) to add flavor or to use as markers on the Napoleonic battle field. The mounted figures come with a variety of options: officer with our without eagle, Elite company bearskins or helmets, trumpeters, numerous arm options, etc. Have I mentioned the new trend in providing hard plastic miniatures for historical wargamers? I love it - the right price and the modeling and conversion of figures have never been better. 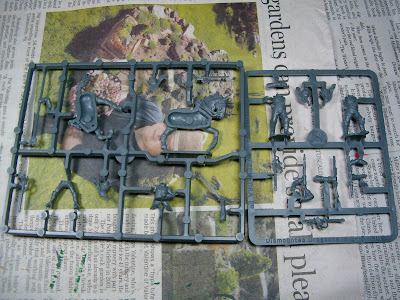 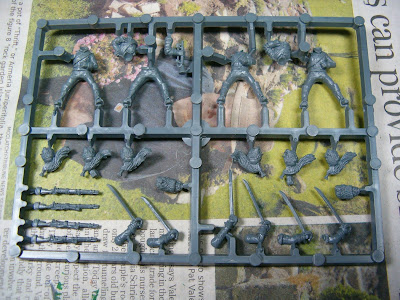 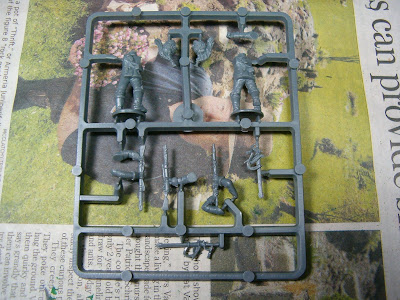 Close up of the dismounted dragoons. 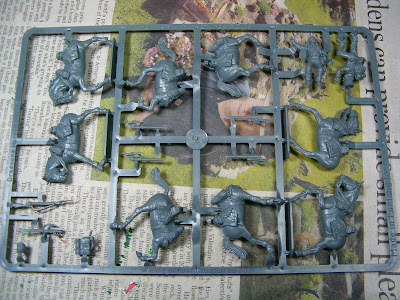 Here is the sprue for the horses; this also has the casualties and battlefield debris. There are also 4 of these included.

The box also comes with plenty of hard plastic bases, a painting guide for all of the dragoon regiments and two 1812 version flags for the 2nd and 7th Dragoons.

What to start on? Many times I will add units just to add some color to the battlefield. I've been building my armies for the rule set Volley and Bayonet which is designed for grand tactical play. Each 3" x 3" stand in the Napoleonic period represents a brigade; I usually mount 3 cavalry figures per stand. With the box set, this will give me 4 Brigades which can usually be deployed as two divisions. The dragoon regiments had various facing colors depending on which number (and which year!) they were. Virtually ever dragoon regiment served in the Peninsular campaign so I am going to do a unit with orange facings, yellow facings, pink facings and red facings. The unit with the red facings will get brown coats, made with local fabric in Spain. 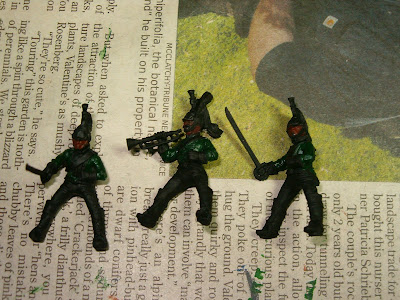 The first three figures will belong to a unit with orange facings. I have also decided to include a trumpeter and I have given the trumpeter one of the elite helmets to have him stand out more with the plume. 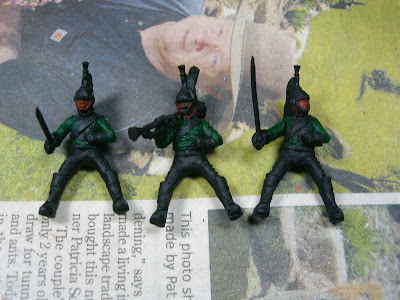 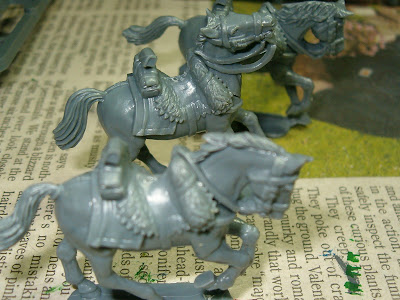 The first 3 horses. One thing I like is that the cartridge box for the mounted dragoon is already on the horse. When the figure is placed in the saddle, the cartridge box looks like it is on the dragoon's belt - and it makes it easier to paint!

As I mentioned earlier there are 13 mounted figures; what should I do with the extra figure? Time to take the officer figure and convert him into a General officer to lead the Dragoon division. I took the officer upper body piece and carefully trimmed off the epaulette that designates the figure as a company officer. By adding an arm for one of the elite company figures, I now have given the figure two epaulettes designating him as a senior officer. Now to add some putty to give a general officer sash. Gotta love the ease of converting hard plastic figures. 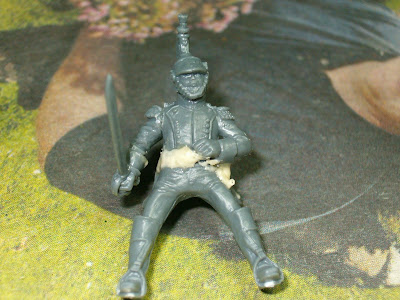 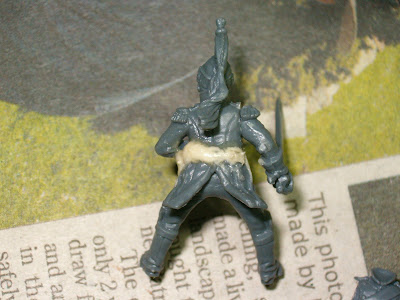 Putty is still wet and needs to be shaped a bit. 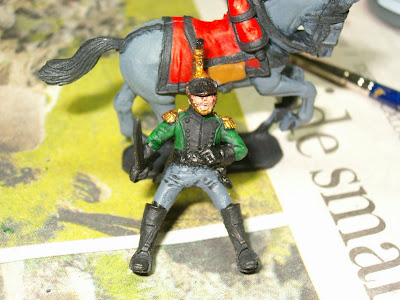 With a little paint and a start on the officer's horse, he is starting to take shape. 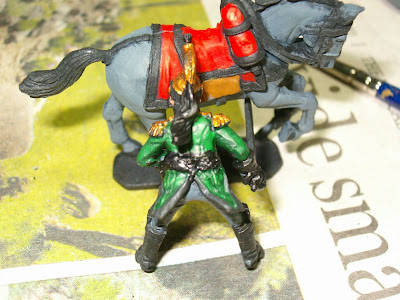 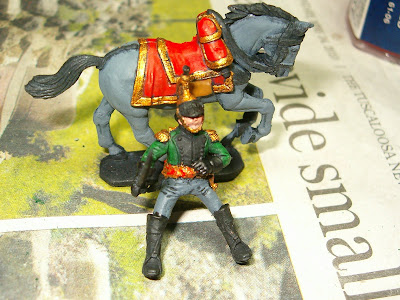 As a General a' Division, he will have a gold sash with red weaved into the sash.