Another momentus day as Honorable Son #2 proposed to the love of his life recently.  She said yes of course!  Another victory for guys who play with toy soldiers. 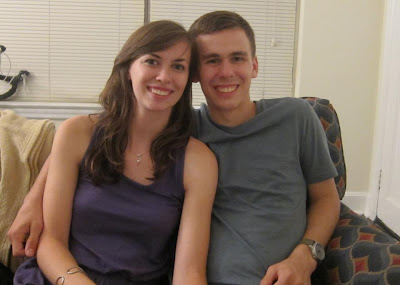 Okay . . . on to the update.  I am slowly but surely making progress on my Peninsular War project using the rule set Volley and Bayonet.   Figures are Wargames Foundry and Perry Miniatures. Here is what I have so far for the French: 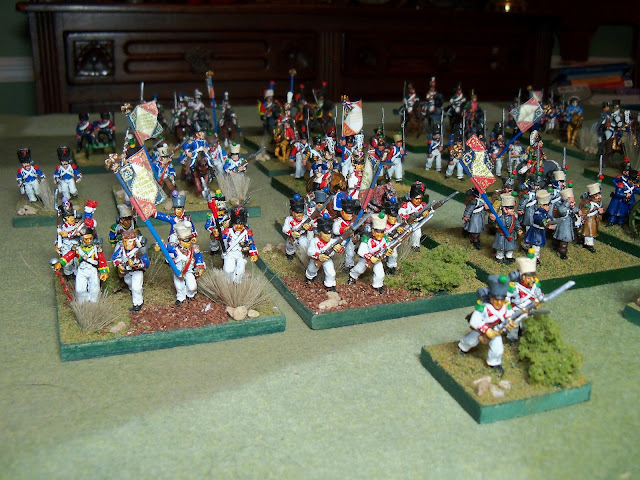 When I'm finished this is what I should have: 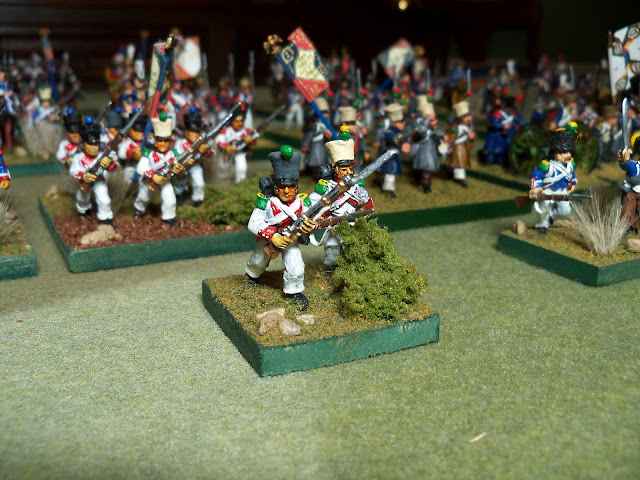 A stand of Dutch Chasseurs.  Infantry Skirmish stands in Volley and Bayonet represent a battalion, usually light troops that are detached for holding ground or to provide the "skirmish" screen. 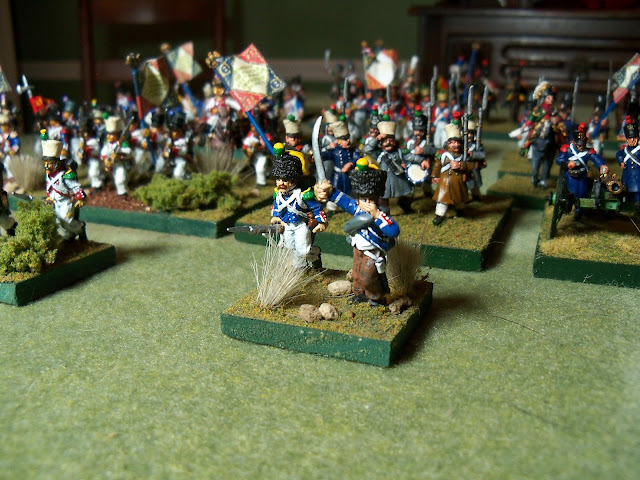 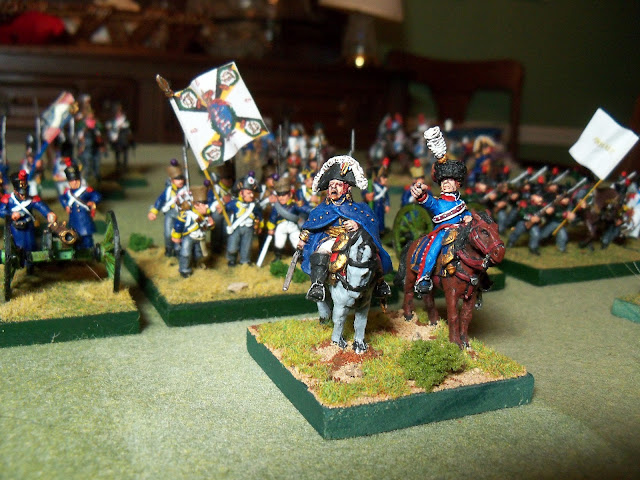 Ney will be one of the Corps Commanders for the army.  I'm planning on having 2 Infantry Corps; I haven't decided who the other Corps Commander will be. 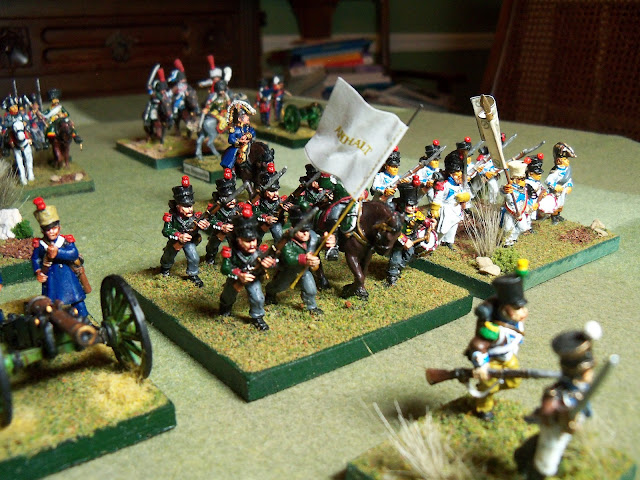 Anahlt and Berg units from the Confederation of the Rhine for General Leval's German Division. 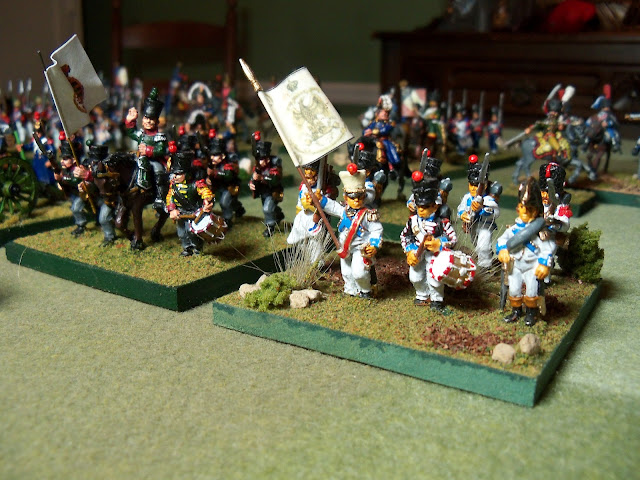 One of the great things about a French Peninsular army, it gives you an excuse to paint many of France's allies to add a little color to all that French blue. 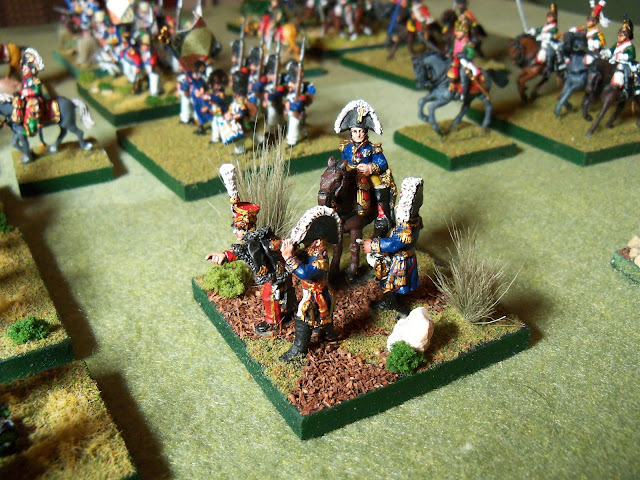 Marshal Soult, one of my Army Commanders. 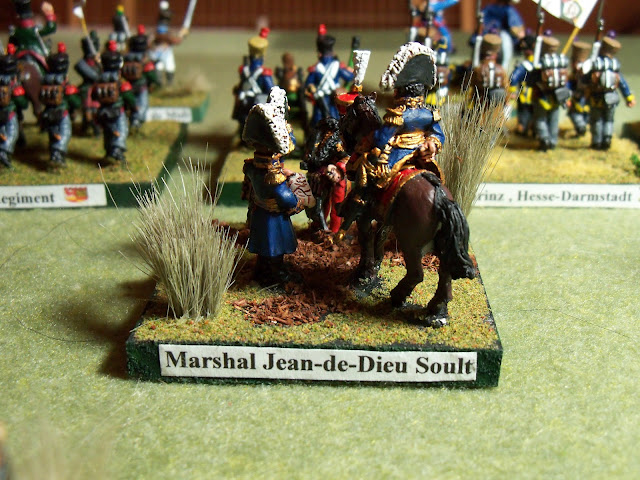 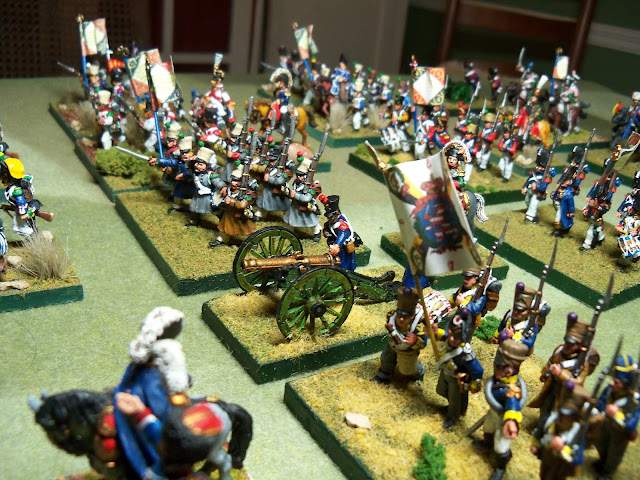 Hessian troops in the foreground with French infantry on the other side of the 8 lbr.  I'm currently only going to do 4 Artillery stands for Volley and Bayonet as the Infantry Brigades can have battalion guns as part of the Infantry stand.  Saves money.  Might get some more later. 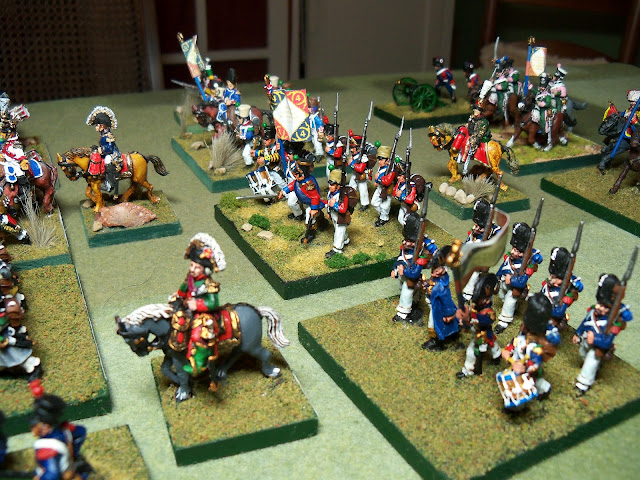 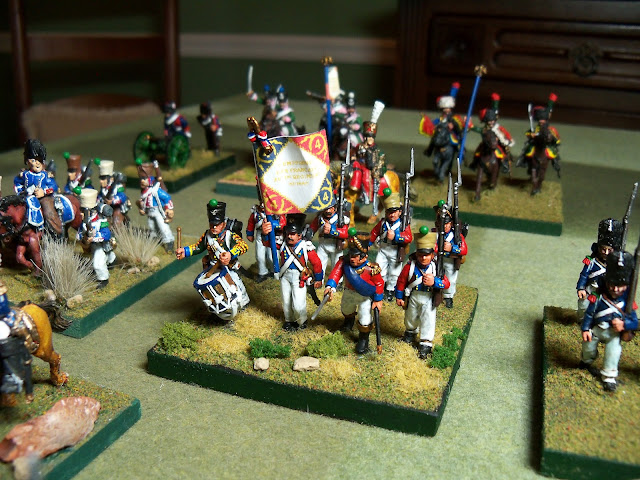 4th Swiss Line.  Did I mentioned I wanted some other colors with my French Blue? 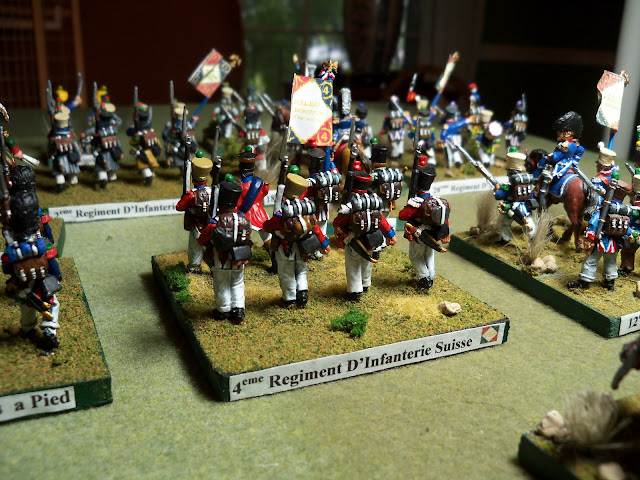 Labels on the back of the stands make it easy to keep track of which unit is which. 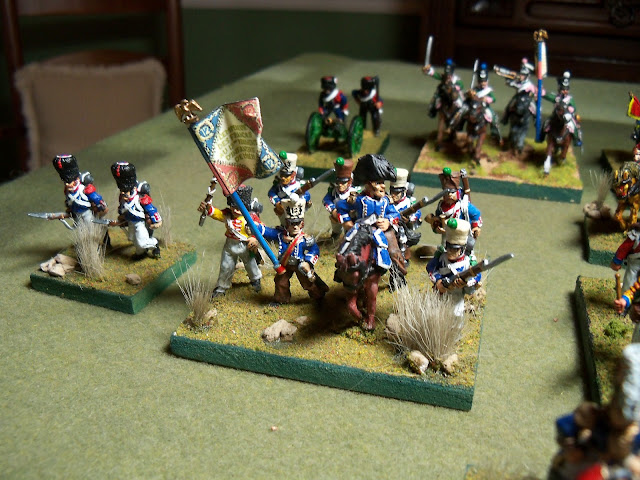 12th Light Regiment with skirmish stand of Carabiniers (the grenadiers of the light regiments). 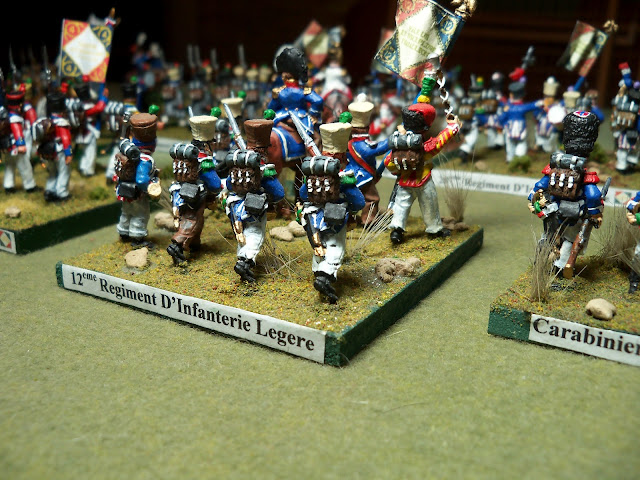 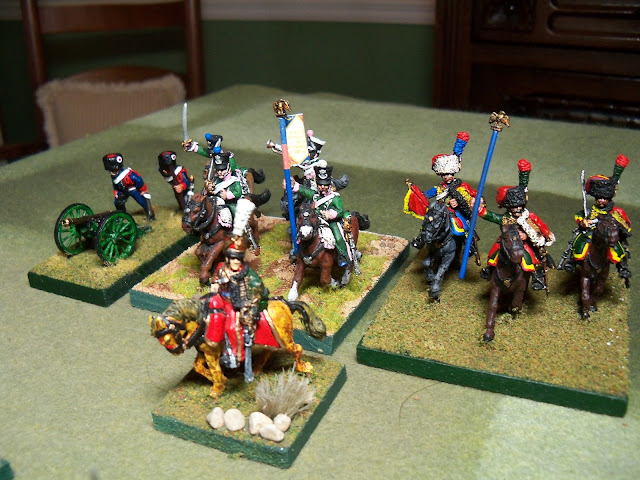 Horse artillery, 7th Chasseurs and the Chasseurs of the Imperial Guard.  I plan on painting 2 more stands of Chasseurs. 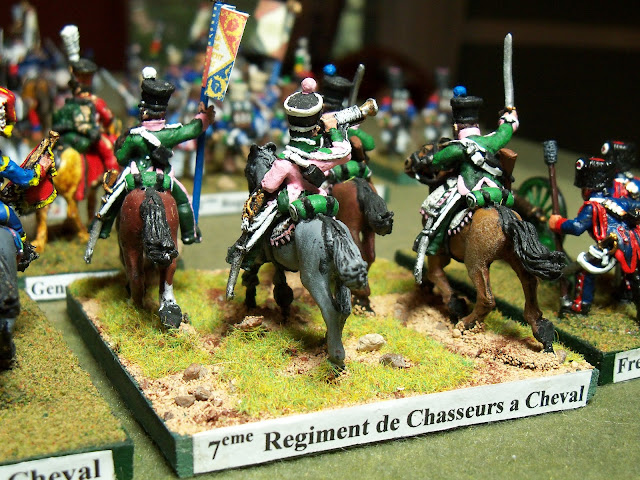 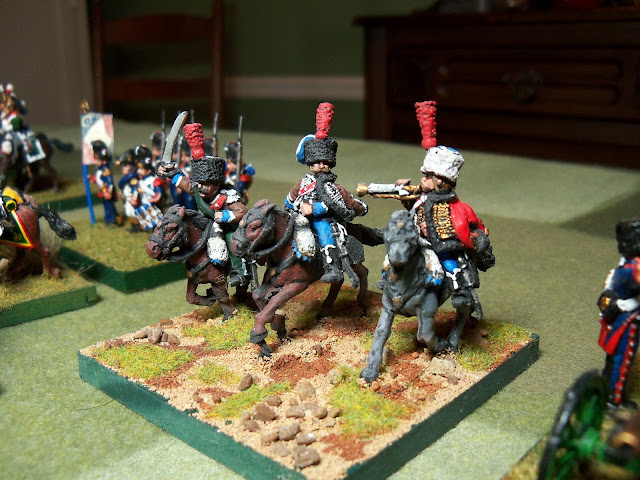 2nd Hussars.  I'll be painting one or two more stands of Hussars. 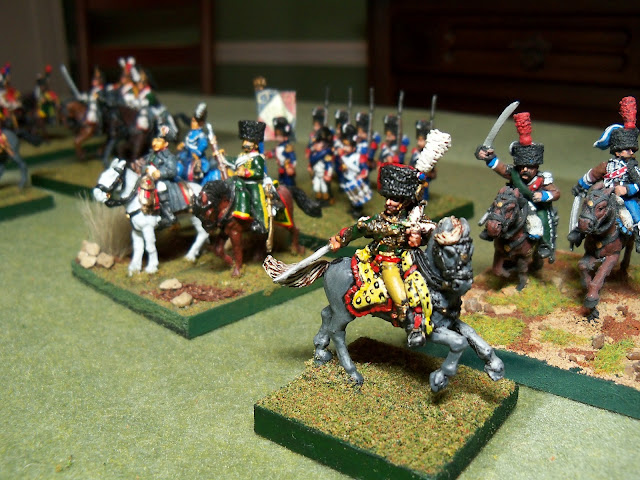 General Denouttes is one of my Division cavalry commanders. 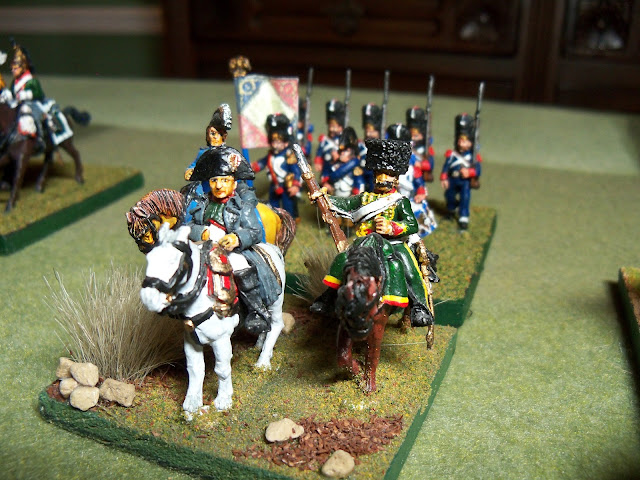 Of course, this is the other Army commander I will be using.  The Old Guard in the background will usually represent converged grenadiers in the Peninsular or the Spanish Royal Guard. 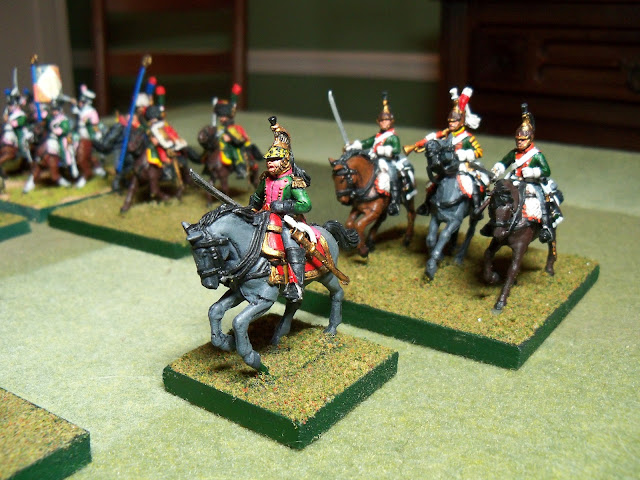 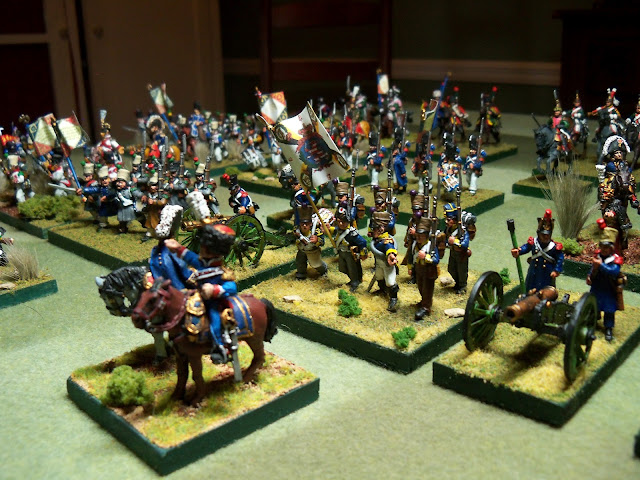 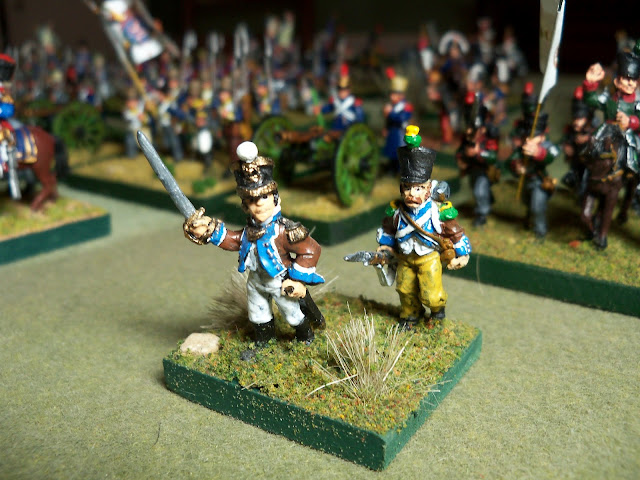 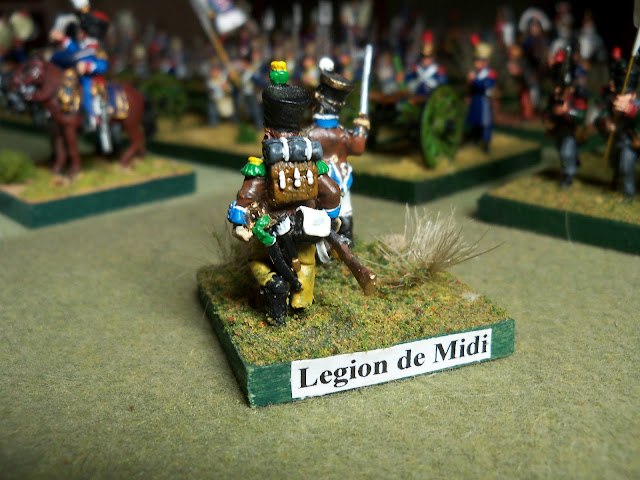 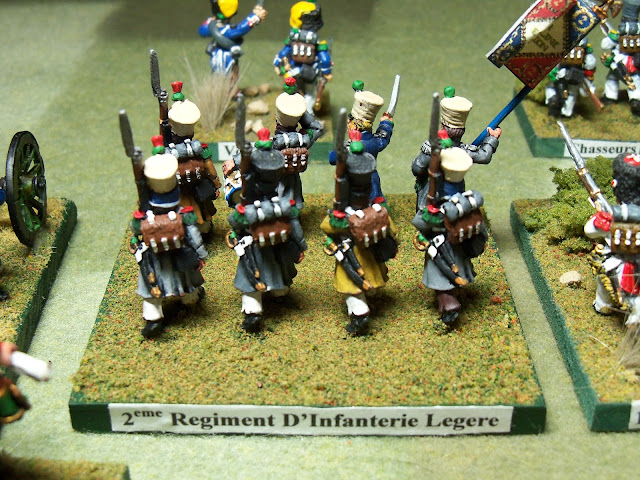 You may have noticed the variation of the bases.  When I started the project, I was using sand to finish the base.  That got old real quick as I tried to paint the sand on bases that are 3" x 3".  I switch to just using mixed green and brown flocking and adding some static grass, small rocks and lichen.  Some of the bases are complete and some aren't.  As I finish the project, the older bases that only have flocking will get the additions of static grass, etc.

I almost forgot to mention, all the flags are from the great Warflag site.