To the Skys of Yesteryear: More Wings of War

I love this game!  Wings of War from Fantasy Flights Games is a fast, simple to learn but hard to master game of aerial combat during World War I.  For movement, each plane selects three movement cards per turn to use in order; one of the best mechanisms I have seen for simultaneous movement.  The cards are selected from a movement deck and each plane uses a different deck depending on its capabilities. 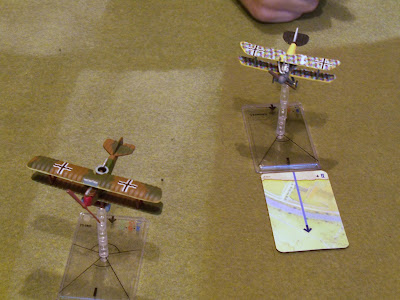 Line up the arrow with the line on the card and move. 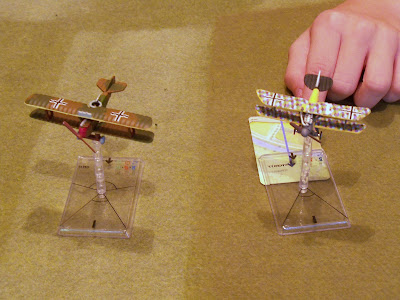 Recently I was challenged by Honorable Son #5 over the skies of World War I Europe.  He was going to try out his new UFAG C.1, a two-seater reconnaissance plane escorted by an Albatross D.V. 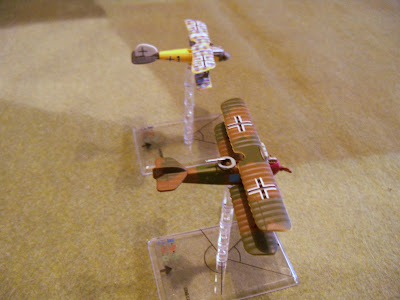 The UFAG C.1 and the colorfully painted Albatross D.V.

The allies, played by yours truely, would have a Sopwith Camel and a Spad XIII. 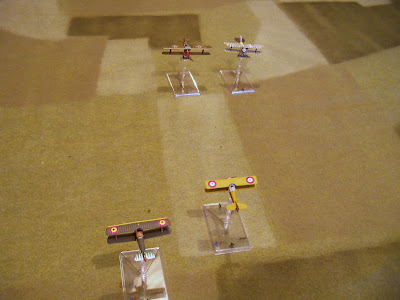 The Hansa-Brandenburg C.I, also known as UFAG C.1 , was a 2-seater armed single-engine reconnaissance biplane designed by Ernst Heinkel.   The C.I had similarities with the earlier B. 1(Type FD, also designed by Heinkel), including inward-sloping interplane bracing struts. Like other early-war Austro-Hungarian reconnaissance aircraft, such as C-types of Lloyd or Lohner, the Type LDD had a communal cockpit for its crew. 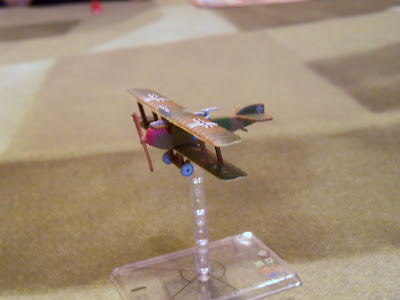 The C.I served in the Imperial and Royal Aviation Troops in visual- and photographic reconnaissance, artillery observation and light bombing duties from early spring 1916 to the end of World War I. The aircraft had good handling characteristics, and steady introduction of more powerful engines in successive production batches (see below) enabled the improvement of performance and thus the continuing front-line service. 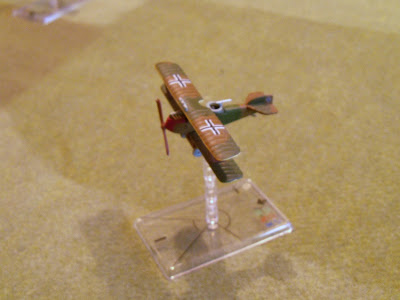 Armament of the type consisted of a free-firing 8 mm (.315 in) Schwarzlose machine gun at the rear for the observer, and at least in some aircraft for the pilot there was also a similar fixed, non-synchronised forward-firing gun in a pod above the top wing. This latter weapon was replaced in later production examples by a synchronised 8 mm (.315 in) Schwarzlose gun on the port side of the fuselage. The normal bomb load for the C.I was 60 kg (130 lb), but some aircraft could carry one 80 kg (180 lb) and two 10 kg (20 lb) bombs. 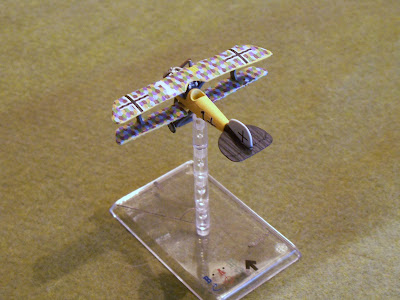 Since it had been a while since we had played, our flying (especially mine) was less than spectacular as we started the game.  The Sopwoth Camel and Spad XIII had several near collisions while the Albatros had difficulty staying near the action. 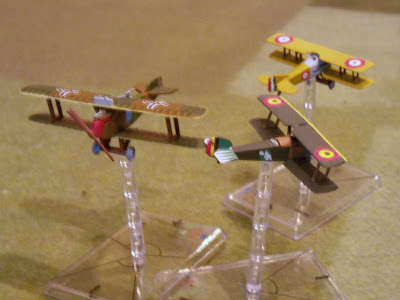 The UFAG C.1 performed admirably, it's rear machine gun reminding the allied planes that it would be difficult to tail unless they got into the rear blindspot caused by the tail.  The allies were being hammered as smoke and rudder malfunctions took a toll on their aircraft.  Unfortunately for Honorable Son #5, a few stray bullets ignited a fire on the Albatros which resulted in a spectacular explosion.  It was then only a matter of time as the two allied aircraft ganged up on the remain two-seater and the pilot of the Spad got his second kill of the day. 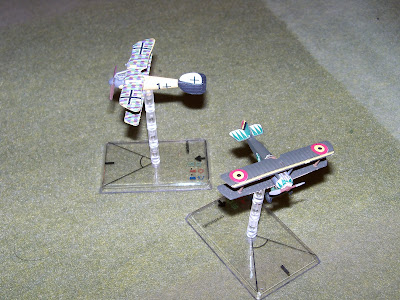 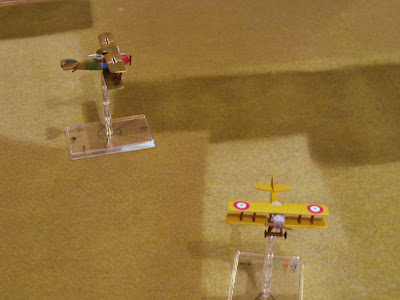 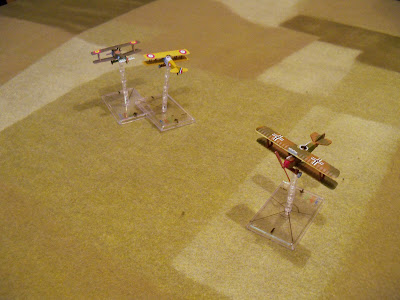 Yes, the Allies have another near collision!