While I'm finishing up my notes for the battle report on the 2nd Battle of Suara, I thought I would preview what is currently on the workbench. I like to "self-support" my hobby as much as possible by painting figures and putting them on eBay. I liked the look of Battlefront's blister pack of Lt. Col Frost and Para Commanders for their WW II game Flames of War. The blister pack has Lt. Col Frost (famously played by Anthony Hopkins in A Bridge Too Far), Maj Gen Urquhart (Sean Connery ), Maj Gen Sosabowski (Gene Hackman) of the 1st Independent Polish Para Brigade and some extras. 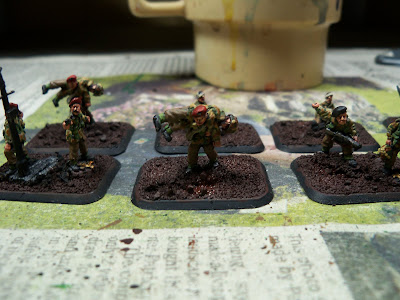 Above is one of the "extras", a British Para carrying a wounded comrade. On the left is the Urquhart figure with his sergeant major. There are also some wounded figures in bandages and arm slings. 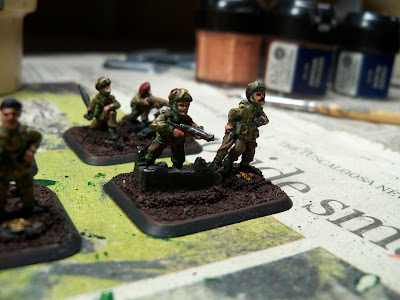 Here is the Lt. Col John Frost command stand. That's a out of focus Maj Gen Sosabowski to his left. 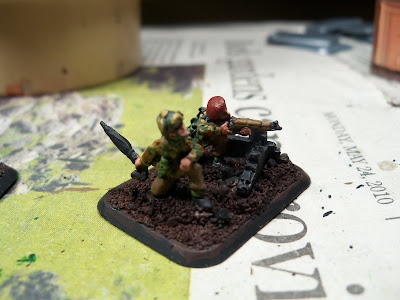 Everyone loves the guy with the umbrella, Maj. Allison Digby Tatham-Warter. In the movie it implies that he dies; in fact he was captured by the Germans. He would escape with his second command and help lead, with the help of the Dutch resistance, approximately 140 British paras to freedom during Operation Pegasus. 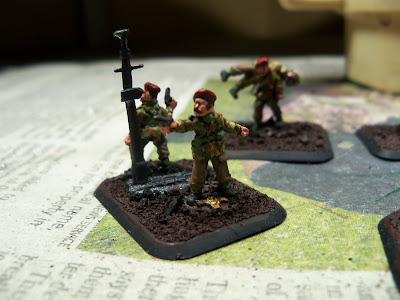 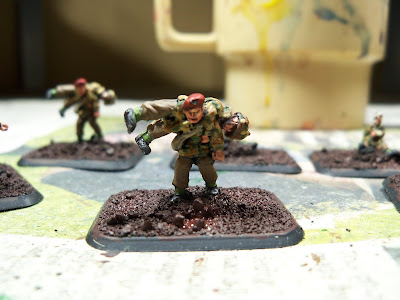 The para carrying his wounded comrade makes an excellent pin marker for Flames of War.

I should have the bases finished this weekend or in a few days and then post the figures on eBay.
Posted by Neil at January 21, 2011