No recent deployments - but I read a good book! 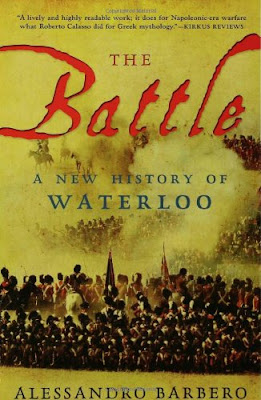 I haven't done much painting lately (still working on that Anhalt unit!) but I did read a great book. Alessandro Barbero's The Battle: A New History of Waterloo is an outstandingly and meticulous researched retelling of the Battle of Waterloo. It is well written and flows like a novel; and, unlike many books about Waterloo, it accurately portrays the contributions of the Dutch, Belgians and various German contingents in Wellington's army. And lets not forget the Prussians and French! Barbero does a great job of using primary sources from generals to privates in the French, Prussian, British, Belgian, Dutch and German armies.

Not just a rehashing of the "same old story", Barbero brings his own analysis, coupled with a careful look at the tactics and terrain of the battlefield, to present a fascinating narrative.

Only two minor (and I mean minor) complaints. The maps are all at the beginning of the book and are a bit hard to follow. I am extremely familiar with the campaign so had no difficulty knowing "who was where and when did they move." On the other hand, someone not as familiar with the campaign and battle may not be able to follow the maps as well. Also, I always like a table of organization of the forces; again, I had numerous references which allowed me to "keep track" who commanded what.

All in all, I highly recommend this for any one who is interested in Napoleon's last campaign or Napoleonic history.
Posted by Neil at March 10, 2011