Fire and Fury in Tuscaloosa

For those of you in the United States you know it's football (American Football) season.  Tuscaloosa, Alabama is the home of the University of Alabama, the defending national champions and winner of 14 national football chanpionships - and we have a good chance of winning number 15.  Yeah . . . they take football seriously in the South.  It's been said that Tuscaloosa is a drinking town with a football problem. 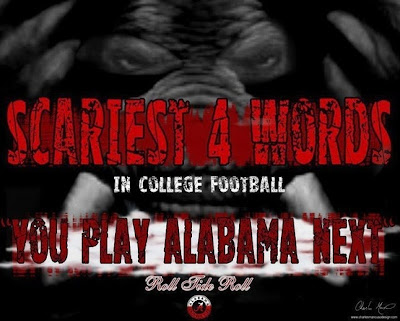 Anyway, with football going on I haven't done much painting or gaming lately but I am now getting back on track with my hobby.  Last night I hosted two friends, Michael Fox (creator of Dogfight: Starship edition), Damon Toney and Honorable Son #4 to introduce them to what I feel is the standard bearer in gaming the American Civil War (ACW):  Fire and Fury. 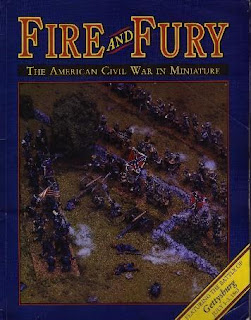 I purchased the first edition of the rules way back in 1991.  The pages are now falling out and there are creases, but I love it!  I'm not sure if it is in print anymore as the creator of the game is focusing on Regimental Fire and Fury.

Fire and Fury is a grand tactical scale game that uses brigades as the maneuver elements allowing larger battles of the ACW to be fought. Players take on the role of Division and Corps commanders. Battles such as Gettysburg, Manassas and Antietam are easily recreated completely with this set of rules. It is not for gamers that want to dabble in the details of regimental level ACW wargaming but is suited for those that would rather recreate the larger battles of the war.

The game can be played with all scales with just some modification of base sizes.  I have seen the game played in 25mm, 15mm and 10mm.  I use 15mm with base sizes of 1" x 3/4" and mounting 3-4 infantry figures representing either 150 or 200 men while each gun model represents a complete battery of 6-8 guns. Units average 5-7 stands for Union and 6-9 stands for Confederate forces but can be as small or as large as necessary to represent historical brigades.  It was the first set of rules I saw that used markers (Disorder, low on ammunition, wrecked batteries, etc.) made from miniatures instead of casualty caps or cardboard chits like other wargames to add to the "feel" of the tabletop battle.


Each side alternates taking turns, first Union then Confederate. The turn's sequence of play is identical for each side, consisting of three phases:

As a gamer and former military history instructor, this game to me best simulates the ebb and flow of ACW battles.  But more importantly, it's a FUN GAME!  Sometimes we forget that they are games and we should be having fun with them!

Editors Note:  I broke my digital camera (sob). Honorable Son #4 allowed me to borrow his iPhone to take pictures of the battle.  My hand was a little shaky and the light wasn't great, but the pictures give you an idea of the game. 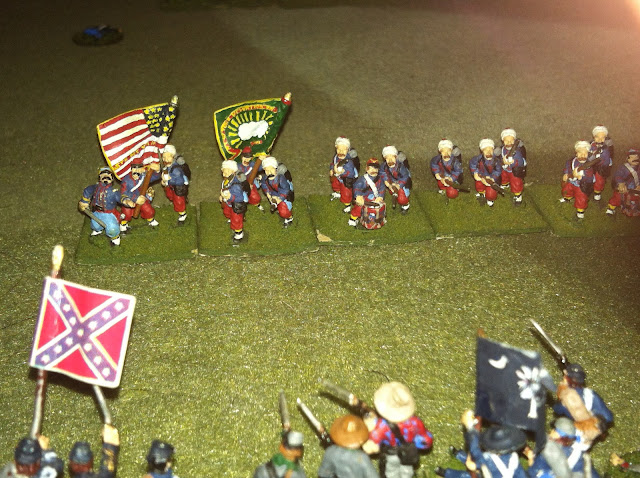 Union Zouaves advance toward the Confederates.  My ACW troops are veterans and were painted between 1991 and 1994.  Broken bayonets, chipped paint and bases are in rough shape; but, they do not suffer from shiny new toy syndrome!  Zouaves from Essex miniatures and Confederates are Old Glory Miniatures.

For the introductory game, I made a chart that represented the formations of the units and the advantages and disadvantages of each formation; e.g. line will maximize fire power and march column is for moving quickly.  After a quick overview of the game mechanics, the forces were already set-up and we got the game started.  I acted as "gamemaster/umpire" to help with the game. The scenario was simple and designed to get the action started as soon as possible to teach the rules. As the Confederates started crossing a stream at a bridge and a ford they run into a Union force that is marching to their front.  The objective: Beat the other side.  Victory points would be awarded per the rulebook (points for making an enemy brigade"skedaddle", destroying or captured artillery, etc.).  The game would be 10 turns.

Michael and Damon commanded the Union forces while Honorable Son #4 commanded the Confederates. The Union was the II Corps with 3 divisions consisting of 10 infantry brigades and 4 artillery batteries. 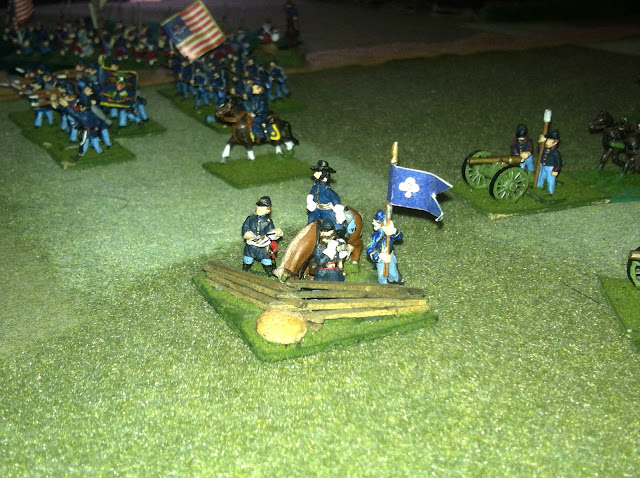 This is the stand that represented Damon on the battlefield, the might commander of the Union II Corps.  All of the figures are from Essex except for the standard bearer which is Old Glory,  I don't remember who made the artillery.  The mounted commander behind the Corps commander represents a Division commander and it is also an Old Glory miniature.

The Confederacy was also a corps with 2 divisions with 6 brigades and 2 artillery batteries.  Though a smaller force, the Confederates had favorable which would prevent all of the Union forces from attacking at once. 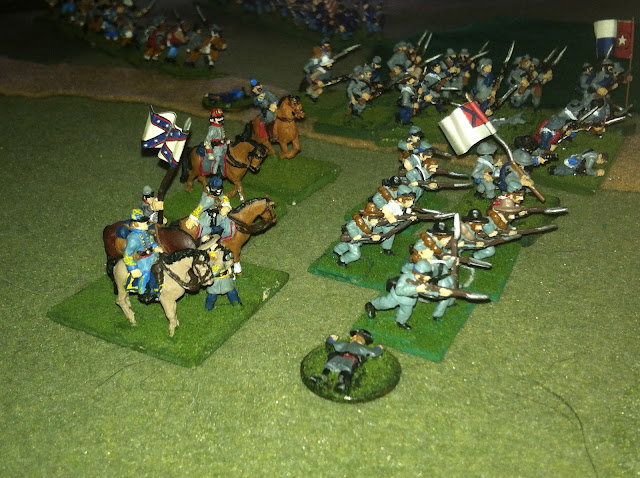 Corps commander for the South painted as Stonewall Jackson.  Looks like I need to fix that bent flag staff!  I think a meeting was going on as both division commanders are there also. The mounted figures are Old Glory and the dismounted office with binoculars is Essex.  Most of the infantry is Old Glory.  Note the casualty marker that designates the infanty brigade as disordered.

After 2 turns, all players were comfortable with the game sequence and knew how to move, shoot and fight.  For the rest of the game, I calculated scores for everyone (it's not as hard as it sounds), offered tactical advice and cheered and groaned with both sides as the game unfolded. 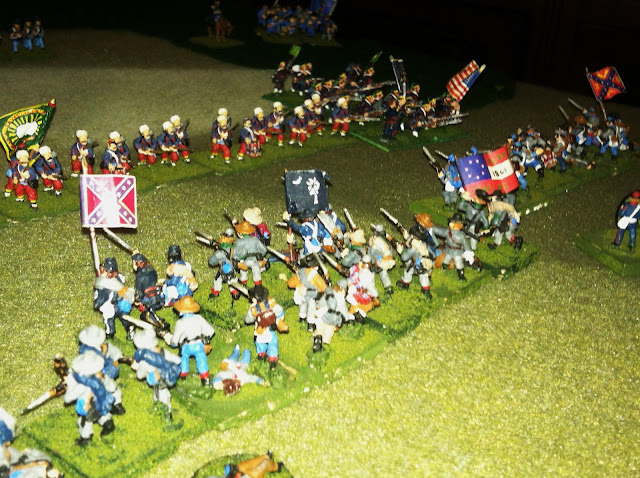 Confederates charge the Union left flank.
Honorable Son #4 put up an aggressive, spirited defense and was close to ruining the fortunes of the Union II Corps when disaster struck.  One brilliant Confederate attack in the middle failed while on his left flank a brigade of rebels ran from the field allowing the Union to outflank the line. 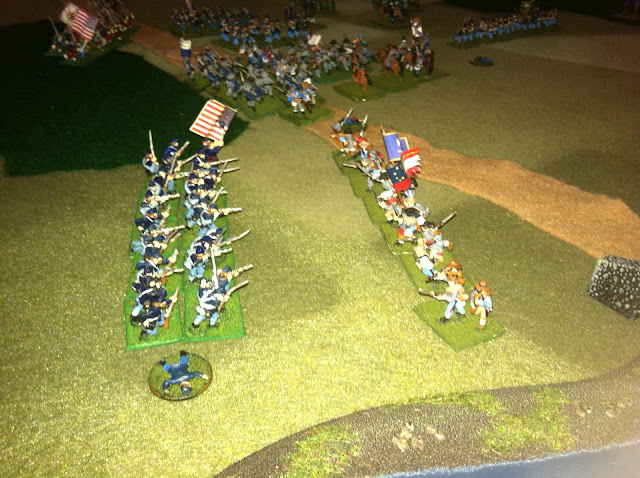 The Union attack that made the Rebs "skedaddle". 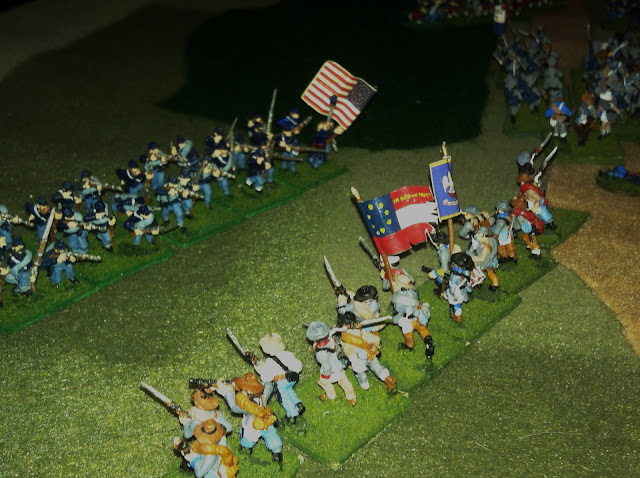 Another view of the attack.  The dark green felt represents the woods.  I'm a little short on model trees right now as many of them volunteered to join a school history project.  I like to use felt
which leaves no doubt as to where the woods start and end.

The Rebs were able to fall back toward the ford licking their wounds as they surrendered the field to the Union forces.  Final tally:  Union 8 Victory Points and the Confederates earned 2 Victory Points. 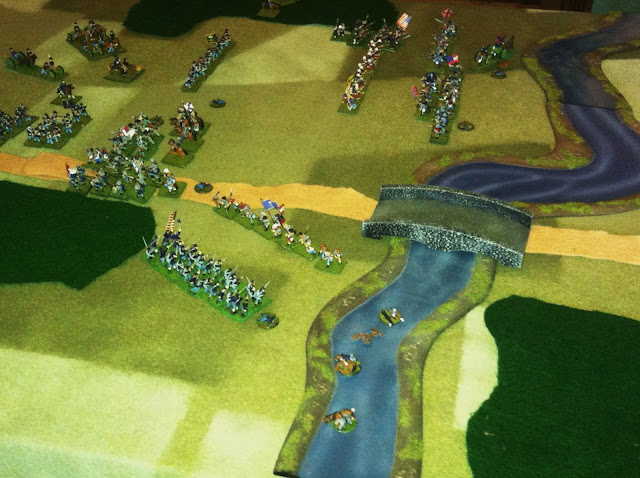 Birdseye view of the final stages of the battle as both Confederate flanks are being pushed back.  The casualty markers in the river are not meant to be ghoulish - it was a convenient place to put the markers that weren't being used!

We played a Corps on Corps action with players new to the game in 3 1/2 hours - including a break for supper!

Special thanks must go to the Army Quartermaster, my lovely bride of 26 years, who made stuffed potatoes and provided snacks and drinks!  I love my wife.