As I prepare for the going away game for Honorable Son #2 as he as his wife move on I suddenly realized that I had no trees for my growing collection of 28 mm figures.  I suddenly realized this while at work on Monday and the game is on Saturday. Yikes!  Here is what I did to get them ready in 3 easy days in the evening after work.

About 6 years ago I bought a kit to make trees from the local Hobby Lobby which were a perfect scale for 15 mm gaming.  By putting the trees together the price was also cheaper and I mounted each tree on a steel washer to weigh them down.  They turned out well but it took a while to make them.  With an English Civil War game this Saturday using the rules Victory Without Quarter I would not have enough time to make trees for 28 mm nor was I inclined to make them.

Fortunately Hobby Lobby has a 40% coupon just about every week and after a quick stop I picked up 6 trees in the model railroad section for $14.00 US - what a great deal.  In addition I purchased 1/8 inch think beach oval plywood that is roughly 100 mm in diameter for the bases for $.84 US.  They had seven and I purchased them all.  The size of the bases are a bonus for me as I am using 120 mm for my base width as I build forces for Dux Bellorum. 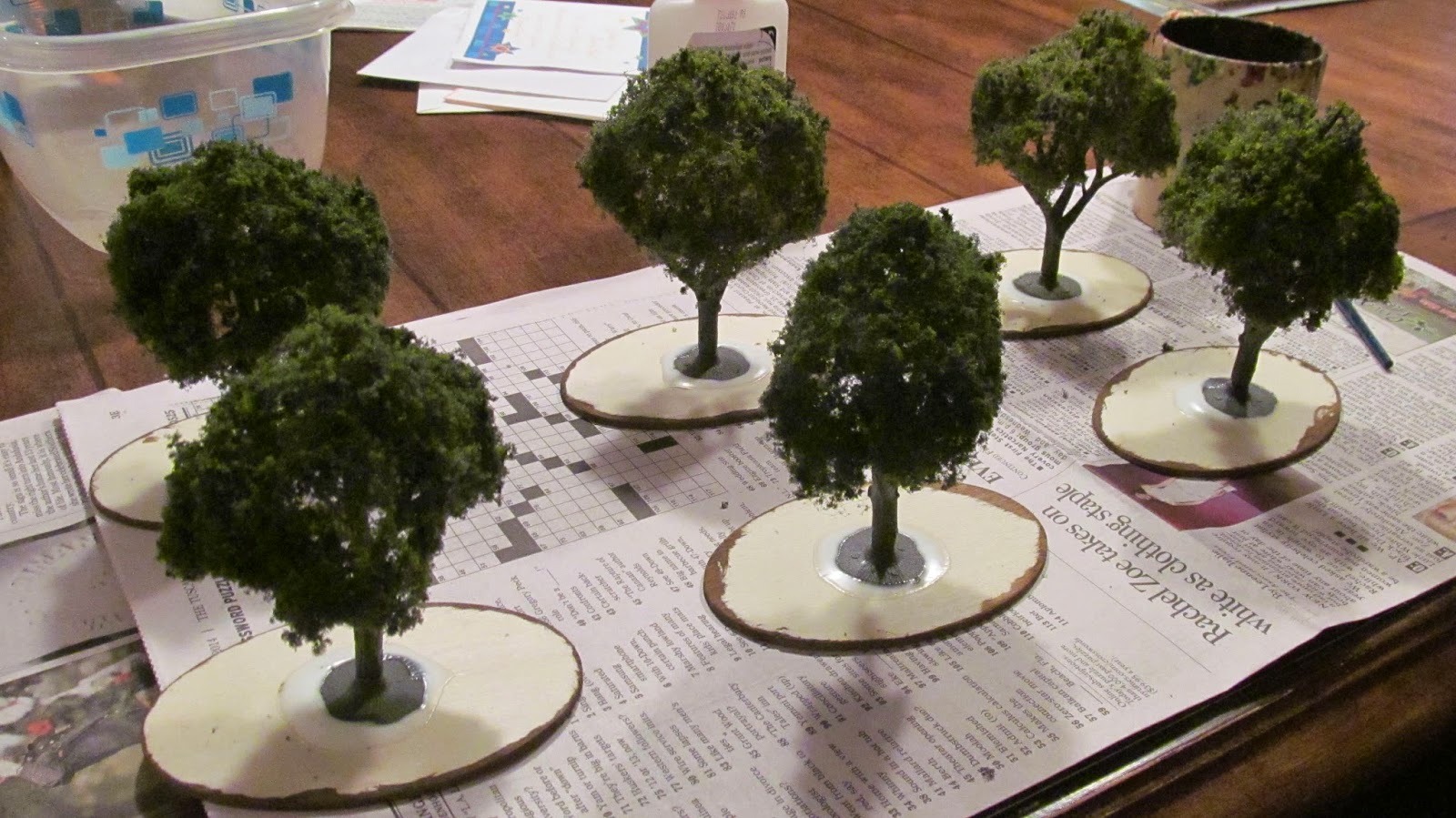 Once the glue was dried I liberally applied glue on the base and then watered it down with an old brush and spread it out over the entire base. 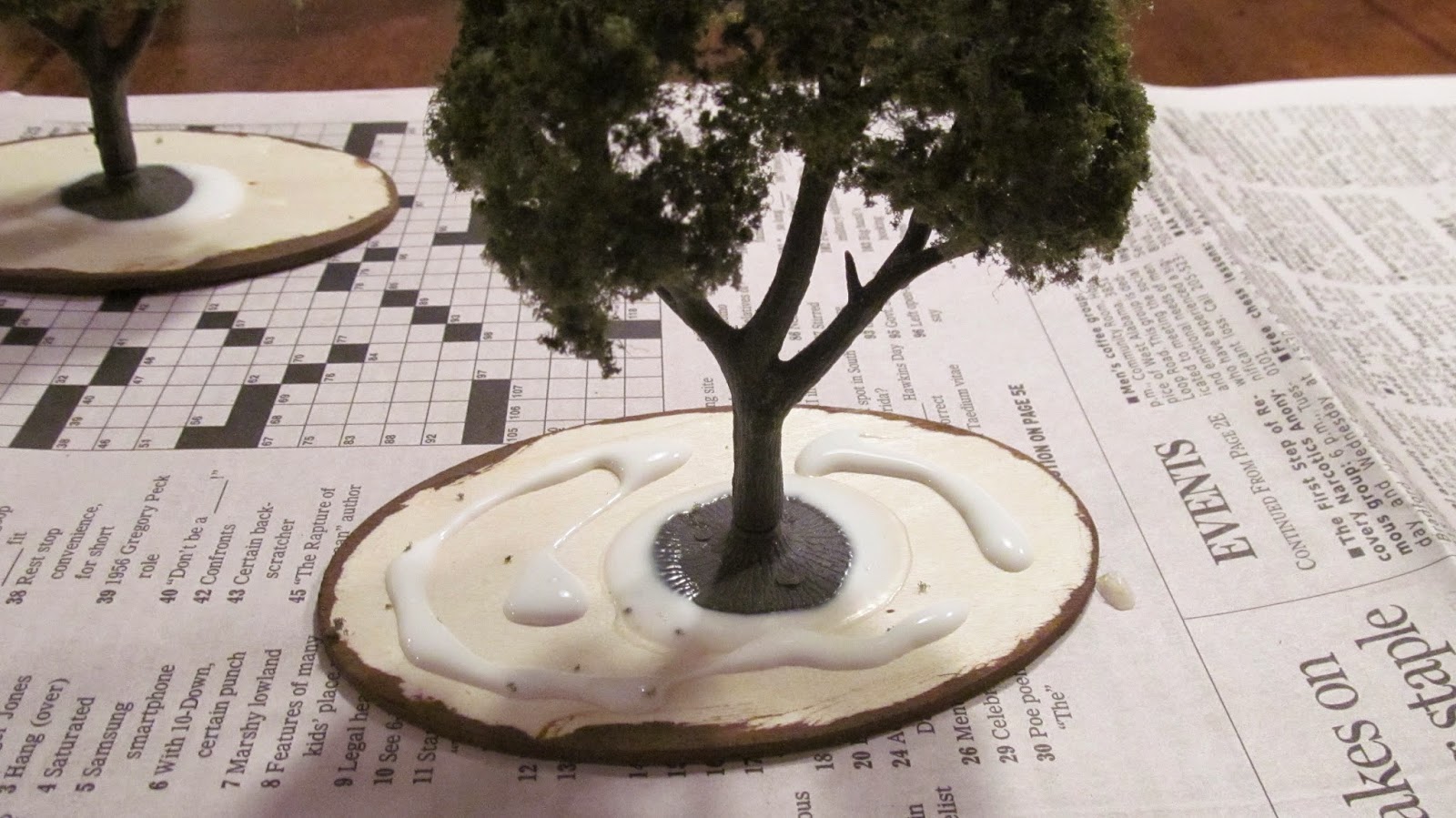 Standing by is an old plastic storage container filled with sand.  I have discovered that various grades of sand sold for model railroading is much cheaper than hobby sand sold for miniature gaming bases.
Once the glue has been spread out I dip the base in the sand and spread it around.  Once this was complete I let all six dry overnight. 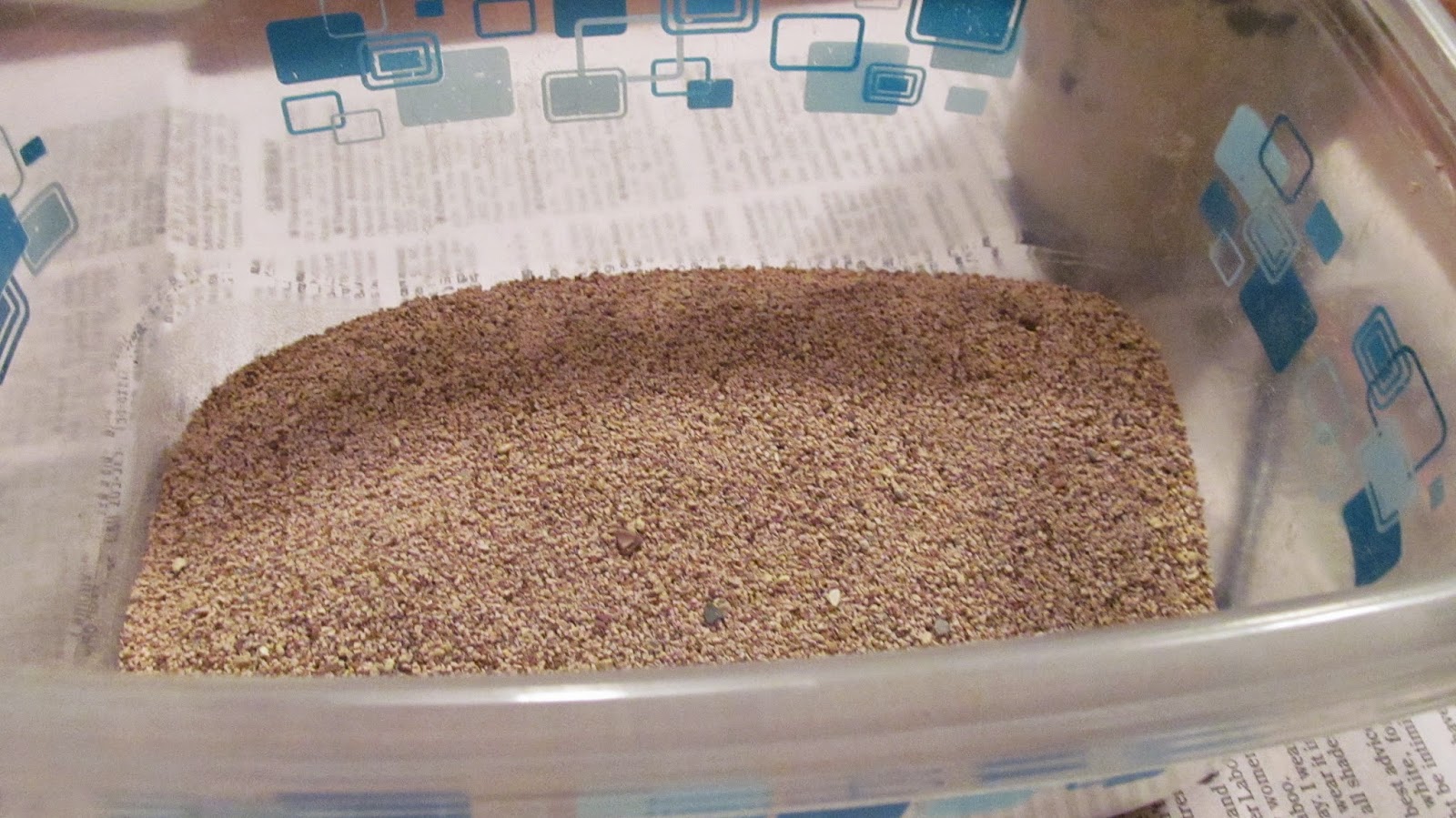 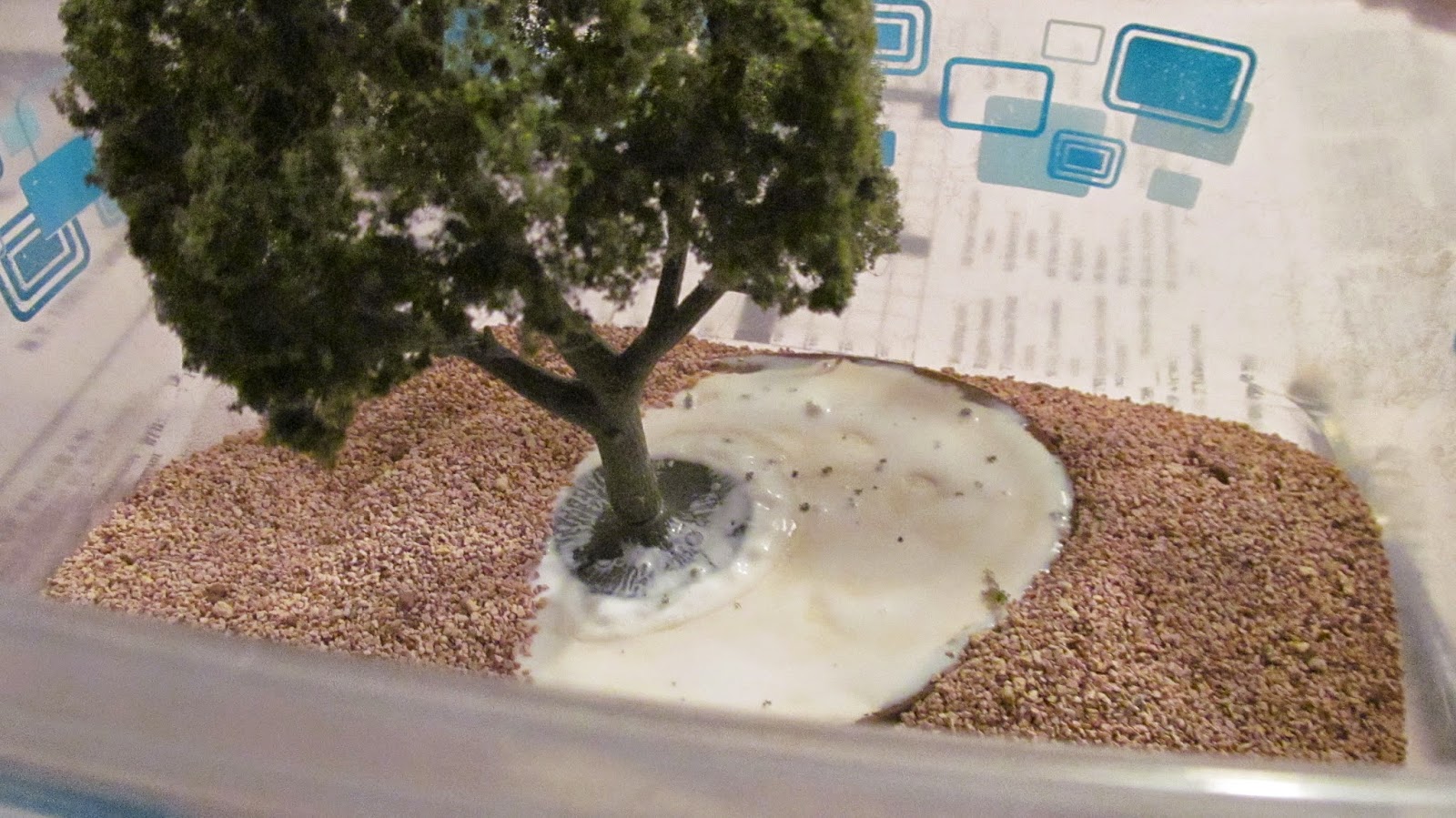 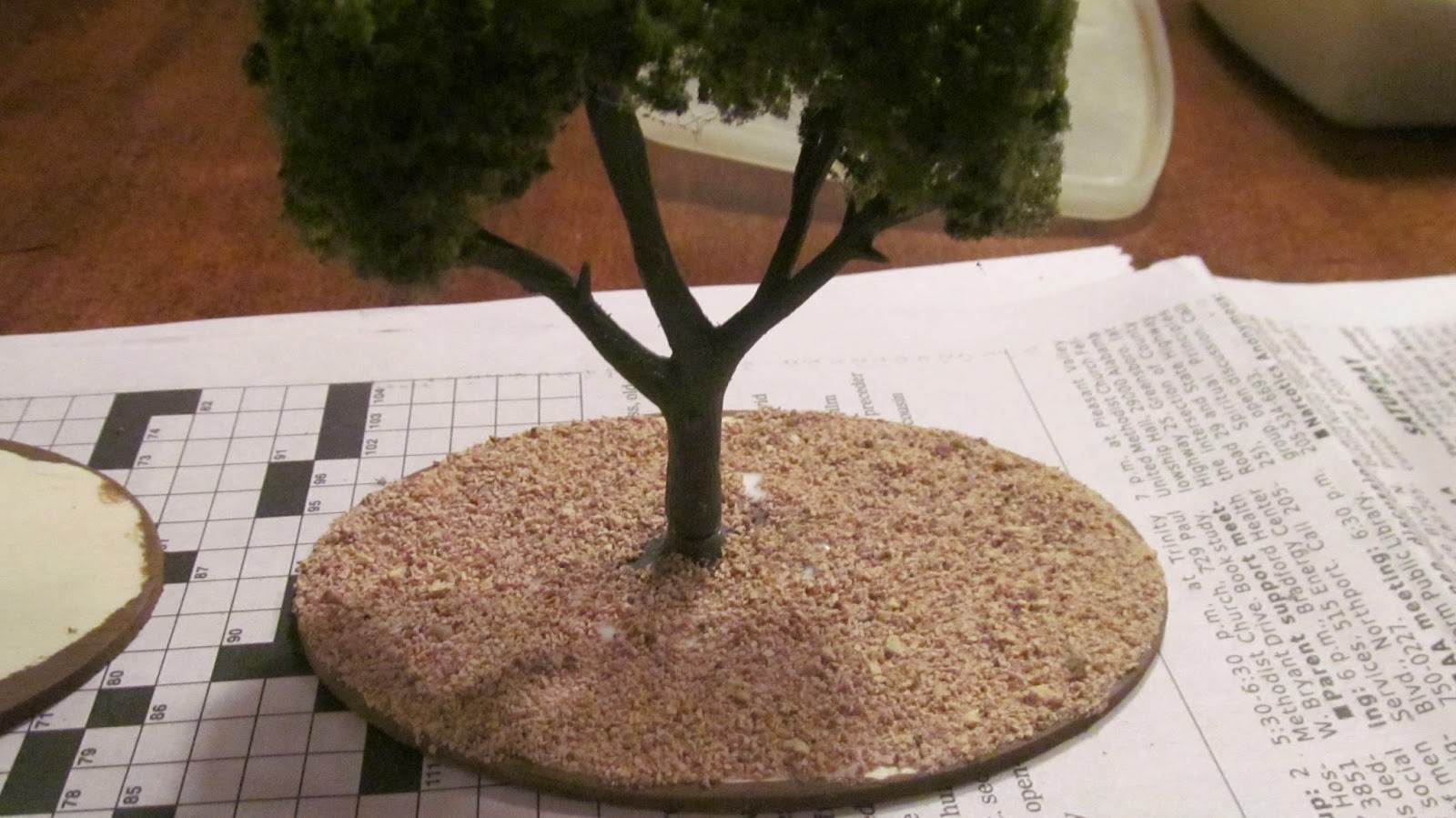 The following morning before going to work, I applied another layer of white glue and watered it down to spread out over the sand.  Though an extra step, it is well worth doing this as it seals the sand better and makes it easier to paint. 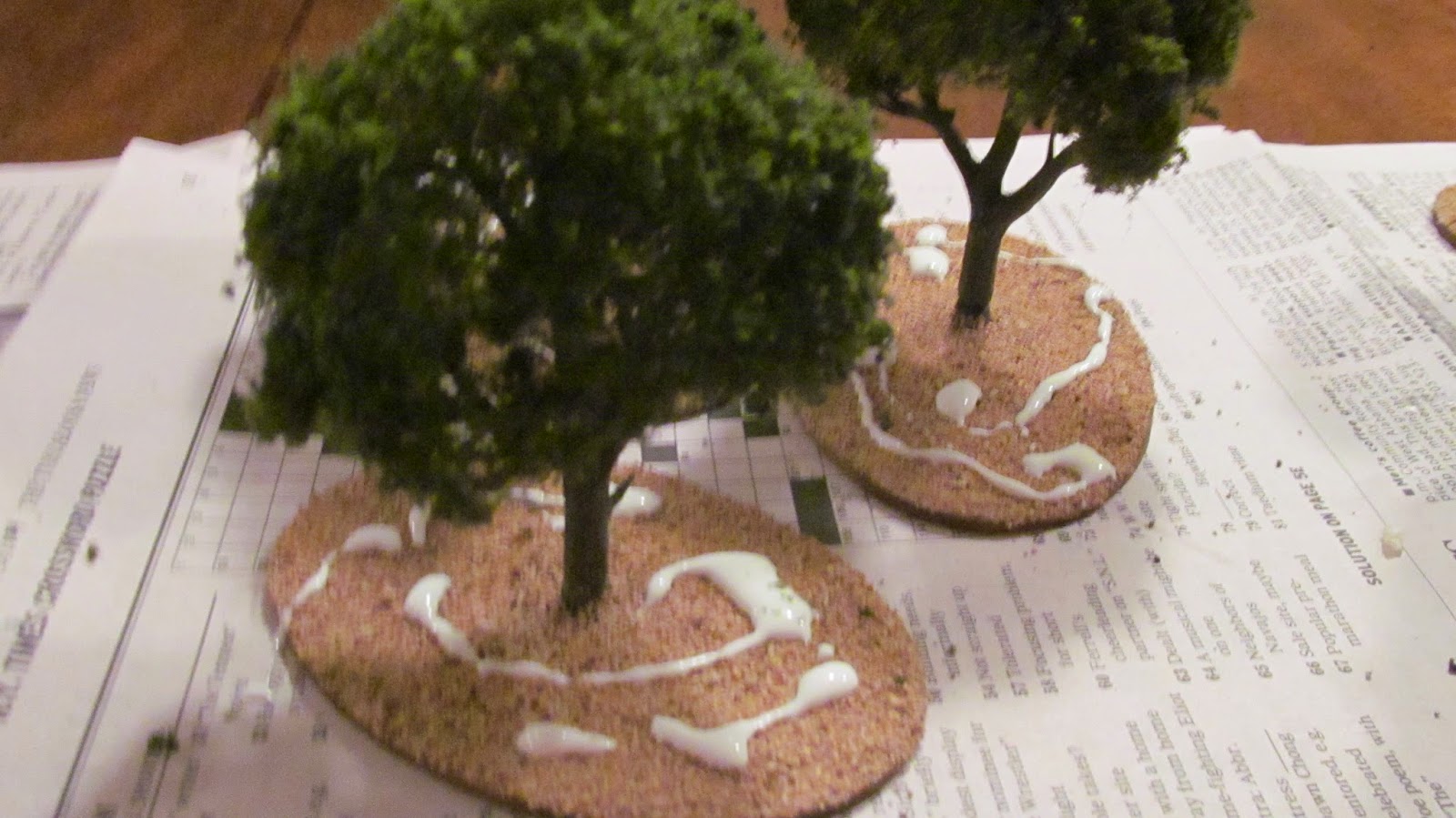 When I came home on Day 2 I did the painting of the sand.  All paints are GW and I used my usual three step process of a base of Rhinox Hide, then a "wet" brushing of Mournfang Brown followed by a dry brushing of Bone White (I'm not sure what the new name is).  Since I am bachelor dad this week that is all I did that evening as I wanted to watch the movie "The Eagle" on Netflix.  Does the movie deviate from Eagle of the Ninth?  Sure it does - but there are cool fight scenes and a good reminder that the Roman army was the first professional military.

Now it is Day 3 and I once again spread some white glue about and then applied static grass from Gale Force 9.  About an hour later I added some additional scenic materials and some rocks and behold - new trees with 2 days to spare! 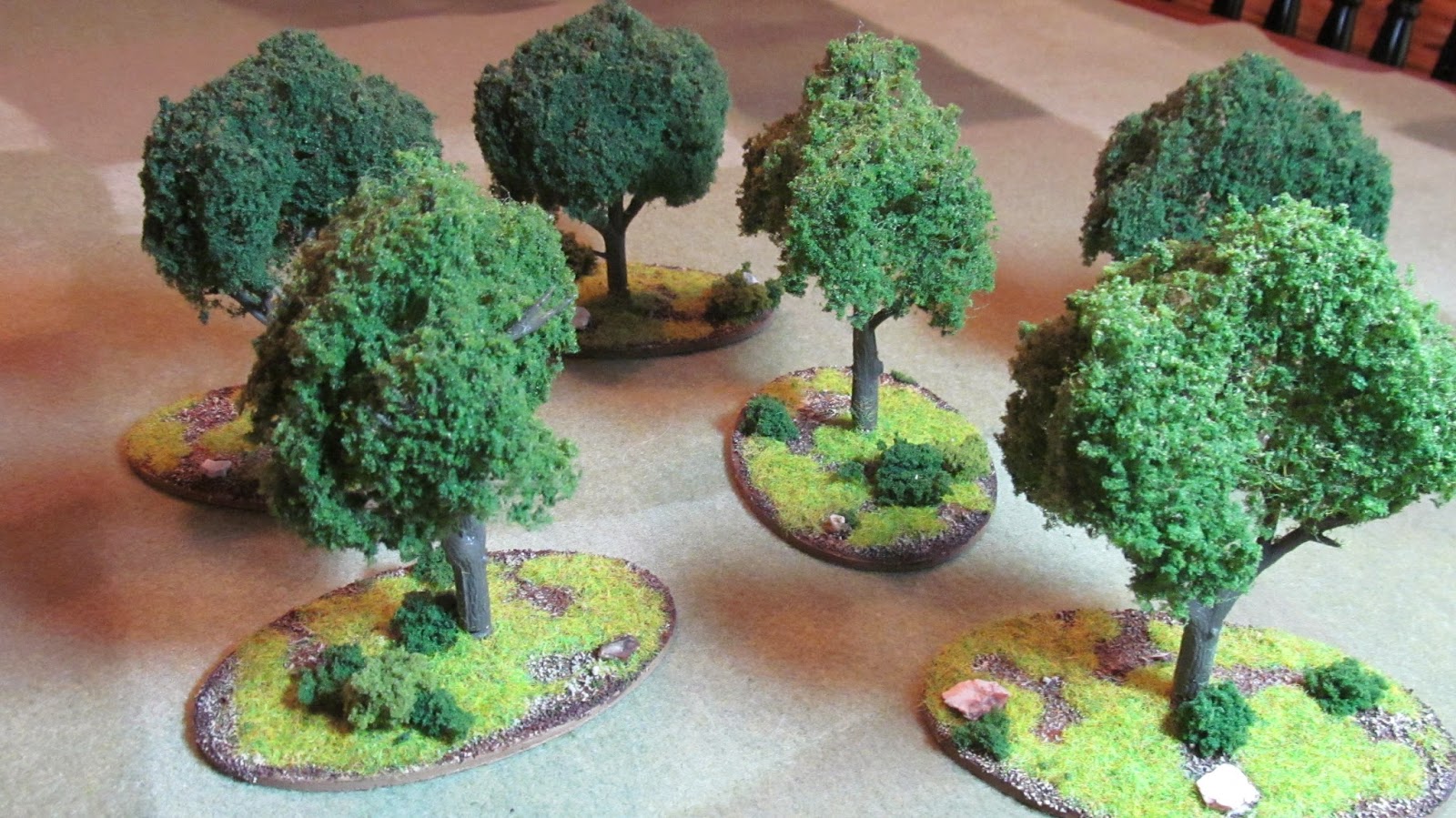