My latest passion is a return to favorite adventures of yesteryear.  Not only am I rereading classic novels such as The Lost World and Twenty Thousand Leagues under the Sea, but I am also reliving the adventures in miniature on the dining room table.  The rule set In Her Majesty's Name is ideal for heroic adventures in the Victorian Age or an imagined Steampunk genre.

Honorable Son #5, who also prefers skirmish games like In Her Majesty's Name presented me with a fine birthday gift.  Lo and behold!  A yeti from Reaper Miniatures Dark Heaven Legends range which will fit in nicely in upcoming adventures 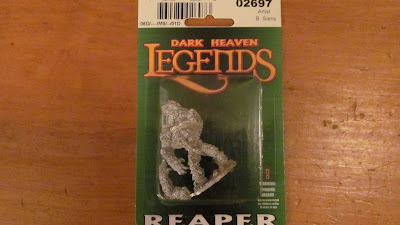 The yeti is cast in two parts, the left arm is separate but easily attached.  This is my first experience with Reaper Miniatures, having only seen images of their figures on the web.  I was surprised, based on reputation, on the amount of flash that was on the figures - mainly under and around the arms, the tips of the claws and underneath the base. The flash was easily removed and a few moves of a file removed some small, hardly noticeable mold lines. 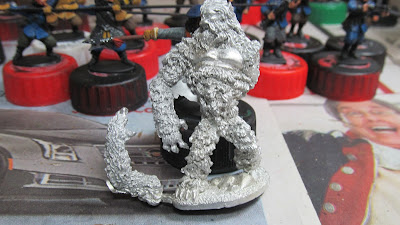 Visible flash under the arm and I had to lean him against another figure due to excess flash underneath the base.

As I mentioned earlier, the left arm was easy to attach in place with super glue.  I thought at first I might need to fill in the gap between the arm and the shoulder but I later reconsidered as it is hardly noticeable.  I attached him to a Games Workshop 60mm round base and was pleased with the imposing stance and animation of Mr. Yeti. 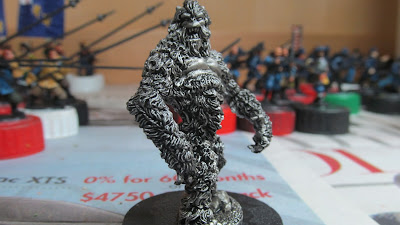 "Are you looking at me?" 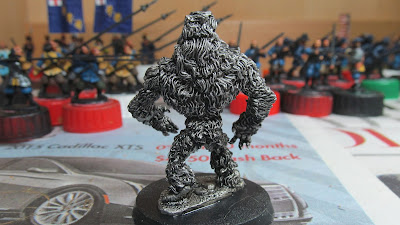 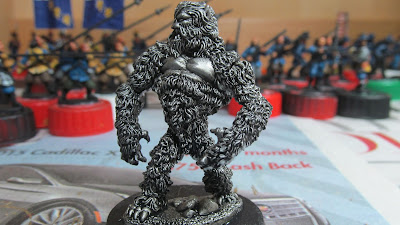 The yeti measures 50mm from his feet to the top of his hairy head.  I applied a coat of thinned down Vallejo black to prime and bring out the features.  Next stop will be to finish this fine looking beast.
Posted by Neil at November 29, 2015