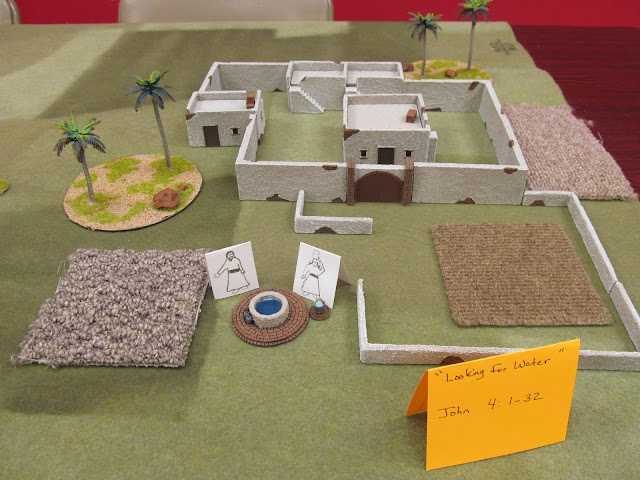 My Beautiful Bride (Chief of Staff and Minister of Finance) and myself have been blessed to teach in Children's Ministry since we were stationed in Fort Monroe. We have always been a team teaching Children's Sunday School and it's been fun incorporating my hobby as part of our faith as Evangelical Christians. 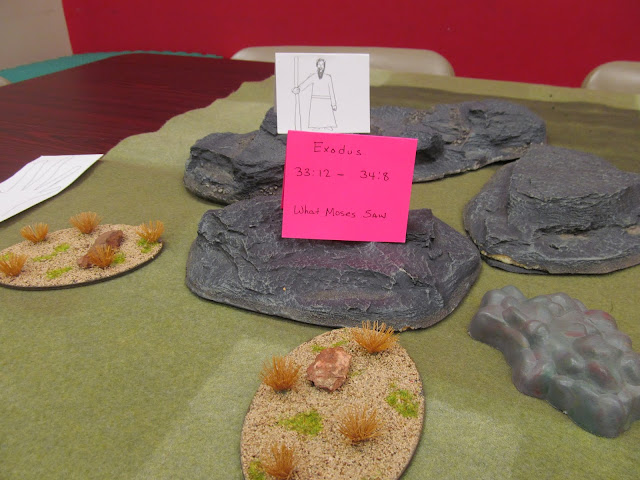 Here I used Gale Force Nine's "Battlefield in a Box" hills plus some terrain I scratched built to teach a lesson from Exodus 33:12 through 34:8. 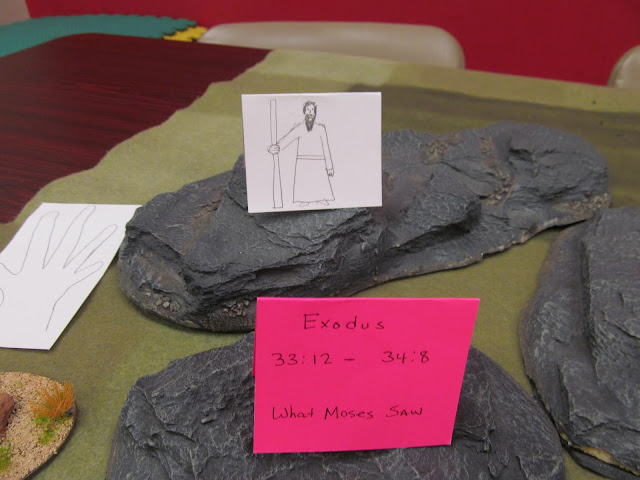 18 Moses said, “Please show me your glory.” 19 And he said, “I will make all my goodness pass before you and will proclaim before you my name ‘The Lord.’ And I will be gracious to whom I will be gracious, and will show mercy on whom I will show mercy. 20 But,” he said, “you cannot see my face, for man shall not see me and live.” 21 And the Lord said, “Behold, there is a place by me where you shall stand on the rock, 22 and while my glory passes by I will put you in a cleft of the rock, and I will cover you with my hand until I have passed by. 23 Then I will take away my hand, and you shall see my back, but my face shall not be seen.” 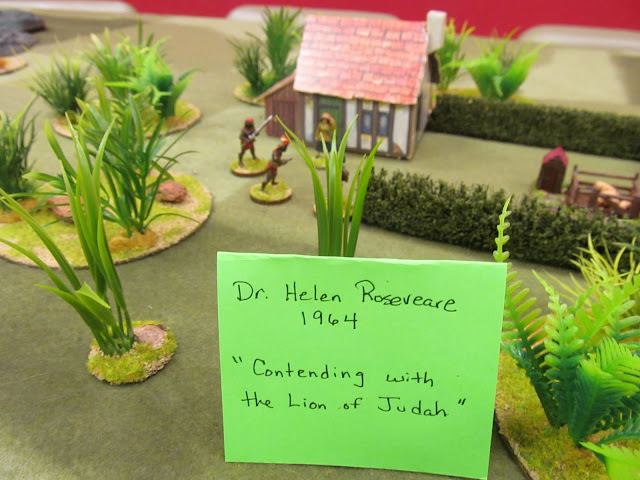 Here I was able to use somdscratch built terrian, my ole standby cottage from Warhammer, and some Copplestone Casting miniatures to tell the story of missionary Dr. Helen Roseveare during the Congo Civil War during the 1960's. 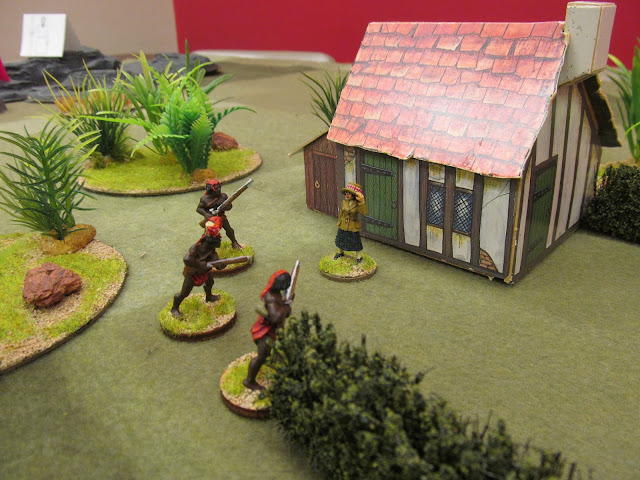 Helen Roseveare was born in Haileybury College in Hertfordshire, England in 1925.  She became a Christian as a medical student at Newnham College, Cambridge in 1945.

After completing her studies, Roseveare applied to WEC to be a medical missionary. In 1953, she went to the Congo, where she was assigned to the north-east provinces. She built a combination hospital/ training center in Ibambi in the early 1950s, then relocated to Nebobongo, living in an old leprosy camp, where she built another hospital. After conflict with other staff at the hospital, she returned to England in 1958.

She returned to the Congo in 1960. In 1964 she was taken prisoner by rebel forces and she remained a prisoner for five months, enduring beatings and rapes. She left the Congo and headed back to England after her release but returned to the Congo in 1966 to assist in the rebuilding of the nation. She helped establish a new medical school and hospital, as the other hospitals that she built had been destroyed, and served there until she left in 1973.

After her return from Africa, she had a worldwide ministry speaking and writing. She was a plenary speaker at the Urbana Missions Convention three times. Her life of service was portrayed in the 1989 film Mama Luka Comes Home. Her touching story about the prayer of Ruth, 10-year-old African girl, for a hot water bottle to save a premature newborn baby after its mother had died has been widely forwarded by email. Roseveare died on 7 December 2016 aged 91 in Northern Ireland. 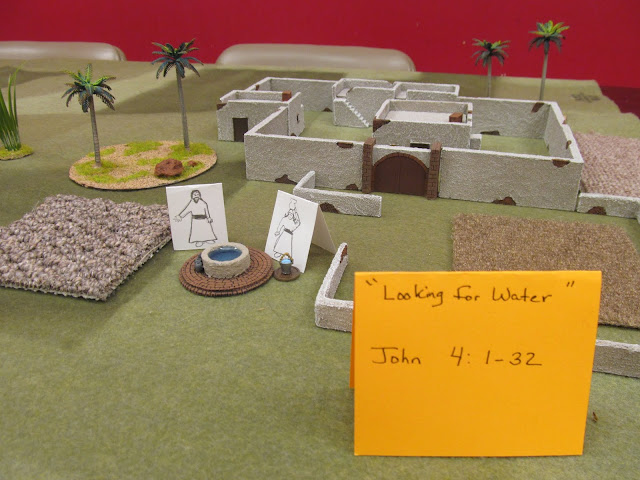 Once again I turned to Gale Force Nine's "Battlefield in a Box" to replicate the Samaritan village of
Sychar. 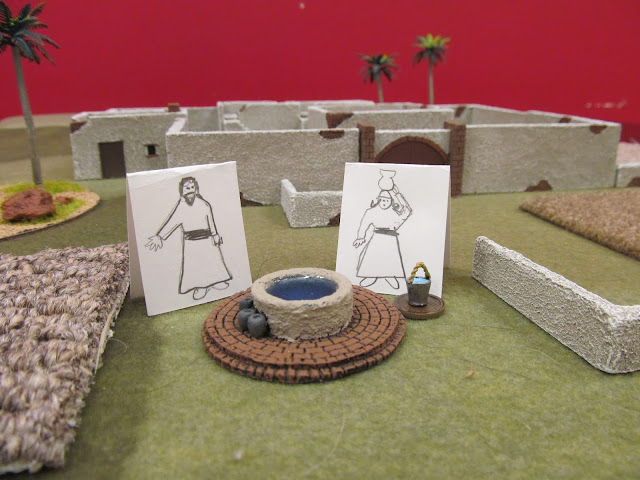 4 Now when Jesus learned that the Pharisees had heard that Jesus was making and baptizing more disciples than John 2 (although Jesus himself did not baptize, but only his disciples), 3 he left Judea and departed again for Galilee. 4 And he had to pass through Samaria. 5 So he came to a town of Samaria called Sychar, near the field that Jacob had given to his son Joseph. 6 Jacob's well was there; so Jesus, wearied as he was from his journey, was sitting beside the well. It was about the sixth hour.

7 A woman from Samaria came to draw water. Jesus said to her, “Give me a drink.” 8 (For his disciples had gone away into the city to buy food.) 9 The Samaritan woman said to him, “How is it that you, a Jew, ask for a drink from me, a woman of Samaria?” (For Jews have no dealings with Samaritans.) 10 Jesus answered her, “If you knew the gift of God, and who it is that is saying to you, ‘Give me a drink,’ you would have asked him, and he would have given you living water.” 11 The woman said to him, “Sir, you have nothing to draw water with, and the well is deep. Where do you get that living water? 12 Are you greater than our father Jacob? He gave us the well and drank from it himself, as did his sons and his livestock.” 13 Jesus said to her, “Everyone who drinks of this water will be thirsty again, 14 but whoever drinks of the water that I will give him will never be thirsty again. The water that I will give him will become in him a spring of water welling up to eternal life.” 15 The woman said to him, “Sir, give me this water, so that I will not be thirsty or have to come here to draw water.”
16 Jesus said to her, “Go, call your husband, and come here.” 17 The woman answered him, “I have no husband.” Jesus said to her, “You are right in saying, ‘I have no husband’; 18 for you have had five husbands, and the one you now have is not your husband. What you have said is true.” 19 The woman said to him, “Sir, I perceive that you are a prophet. 20 Our fathers worshiped on this mountain, but you say that in Jerusalem is the place where people ought to worship.” 21 Jesus said to her, “Woman, believe me, the hour is coming when neither on this mountain nor in Jerusalem will you worship the Father. 22 You worship what you do not know; we worship what we know, for salvation is from the Jews. 23 But the hour is coming, and is now here, when the true worshipers will worship the Father in spirit and truth, for the Father is seeking such people to worship him. 24 God is spirit, and those who worship him must worship in spirit and truth.” 25 The woman said to him, “I know that Messiah is coming (he who is called Christ). When he comes, he will tell us all things.” 26 Jesus said to her, “I who speak to you am he.”
27 Just then his disciples came back. They marveled that he was talking with a woman, but no one said, “What do you seek?” or, “Why are you talking with her?” 28 So the woman left her water jar and went away into town and said to the people, 29 “Come, see a man who told me all that I ever did. Can this be the Christ?” 30 They went out of the town and were coming to him.
31 Meanwhile the disciples were urging him, saying, “Rabbi, eat.” 32 But he said to them, “I have food to eat that you do not know about.”
Posted by Neil at 2:25 PM