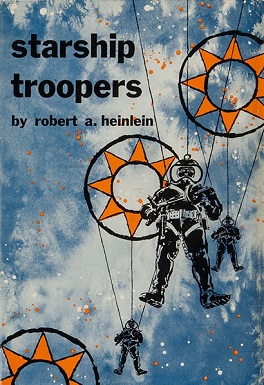 "I always get the shakes before a jump . . ." thus starts one of the greatest military science fiction novels of all time, Starship Troopers, by Robert Heinlein. Even today, the book has stood the test of time, and was a big influence on my decision to be an Infantry officer.

When I attended the Command and General Staff College, I was pleasantly surprised to see the novel on the required reading list. Today, the novel is still on the reading list for the US Army, Navy and United States Marine Corps. 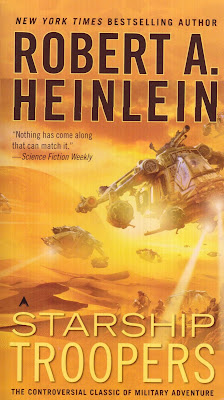 Juan Rico begins the novel with no thought of his personal responsibility or of any particular group's responsibility to self or others. This theme is obliquely addressed in the novel's opening: "We had all inspected our combat equipment (look, it's your own neck -- see?), the acting platoon sergeant had gone over us carefully after he mustered us, and now Jelly went over us again, his eyes missing nothing." "Now I was going to have a hole in my section and no way to fill it. That's not good; it means a man can run into something sticky, call for help and have nobody to help him." "I've heard tell that there used to be military outfits whose chaplains did not fight alongside the others, but I've never been able to see how that could work. I mean, how can a chaplain bless anything he's not willing to do himself? In any case, in the Mobile Infantry, everybody drops and everybody fights -- chaplain and cook and the Old Man's writer."

The theme is repeated through flashbacks to High School and Officer Candidate School in a required class called History and Moral Philosophy. In this view, everything from the right to vote to the punishments for various crimes are depicted as part of a larger effort to recognize society's needs and improve society, as distinct from self-interest. The service Heinlein envisioned was an all-volunteer service, long before the US military had changed to an all-volunteer model. Other than the rights to vote and hold public office, there is no other restriction between service veterans and civilians. 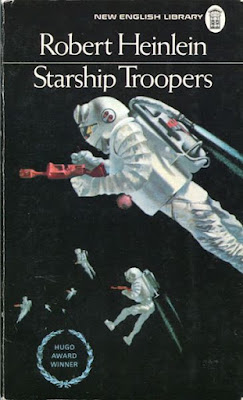 In the course of both the "current" plot and flashbacks Rico learns to take responsibility forever-increasing groups: himself, his comrades, and eventually all of mankind (a shared responsibility), and accept that as the reason for remaining in the service. Further, Rico is seen to develop from a relatively powerless citizen, to a very dangerous fighter: "There are no dangerous weapons; there are only dangerous men. We're trying to teach you to be dangerous -- to the enemy. Dangerous even without a knife. Deadly as long as you still have one hand or one foot and are still alive.".

I just finished my annual reading of the book . . . something I do annually!

Now for the Warning!!! 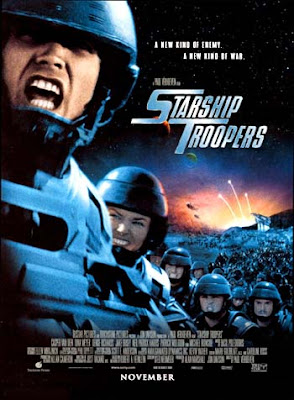 This is a poster for the movie directed by Paul Verhoeven who admitted he never finished reading the book.  Please don't watch it . . . you'll thank me later.  Not only does the movie miss most of the points of the book and, as a retired infantry officer (Regulars By God!), it's embarrassing to watch.
Please don't get me started on how they portray Lieutenant Rasczak, the epitome of the servant leader in the novel that leads the Roughnecks.

One of the worst scenes in the book is when the platoon is defending an outpost and the bugs are coming. I can see the nuclear rockets strapped to the backs of the (so called) Mobile Infantry! So what do they do? Break out the SMALL ARMS (sigh). How about the scene when the platoon surround a bug in a circle, and then they all fire at the bug! In a circle? They would have hit each other. (Note: That's a safety violation) And please

Do not watch the movie!