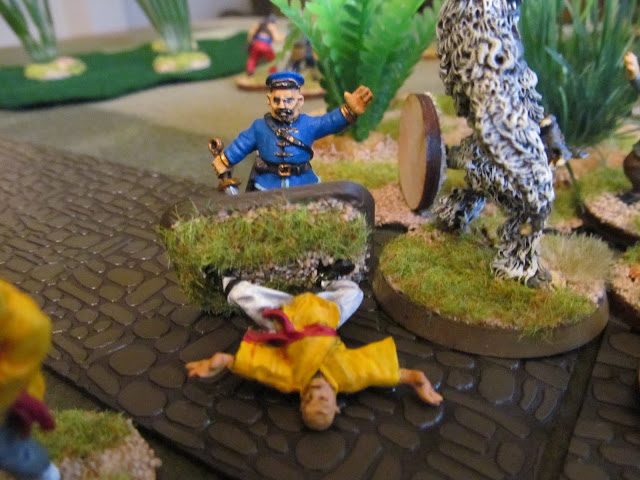 In our last episode, General Ronglu had dispatched is old foe, Kwai Chang Caine (and his 2+ Leadership rating), and the Martial Monks of Justice were starting to take heavy losses. 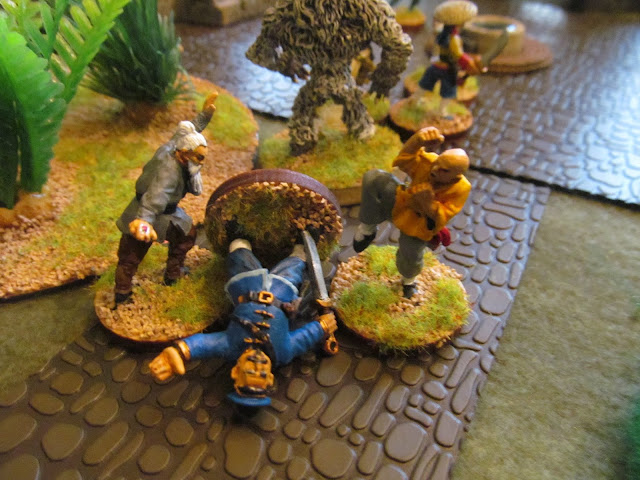 General Rongluis no match for the team up of the master and the monk. Now the Imperial Chinese lose Ronglu's Leadership of +2 and must rely on the Imperial Sergeant's +1. 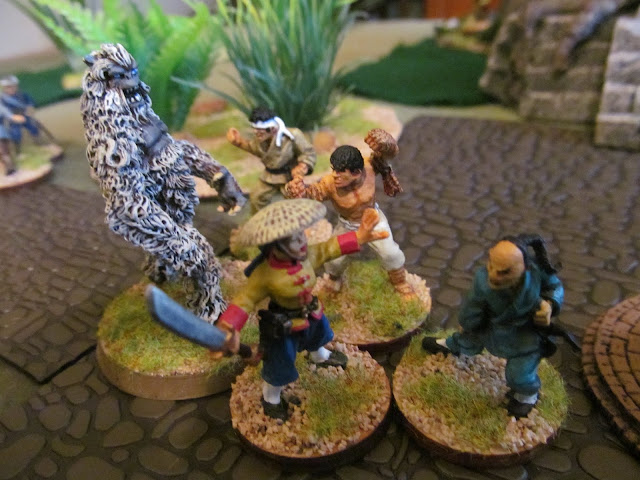 The melee goes back a forth as blows are blocked, kicks are made, and Hollywood maneuvers are attempted. 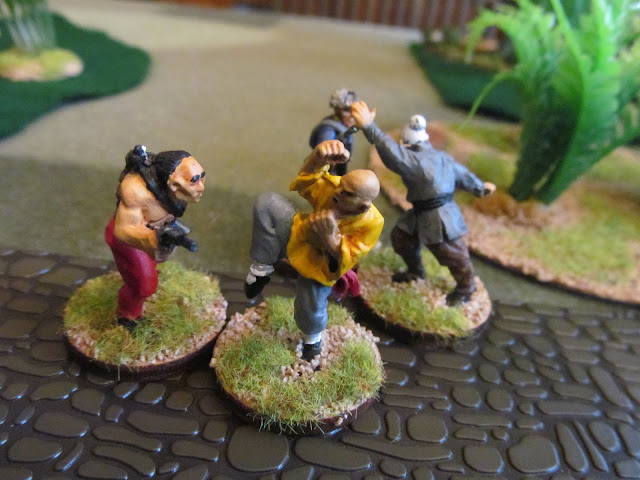 Time to take out the last men with firearms. 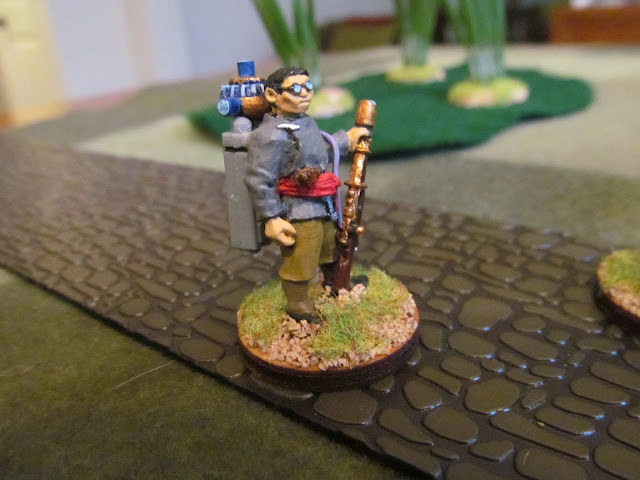 "Hello? I just can't seem to get in the fight with my Arc Rifle that reduces armor to 7 and all of you monks only have an armor of 7."  (Whoops) 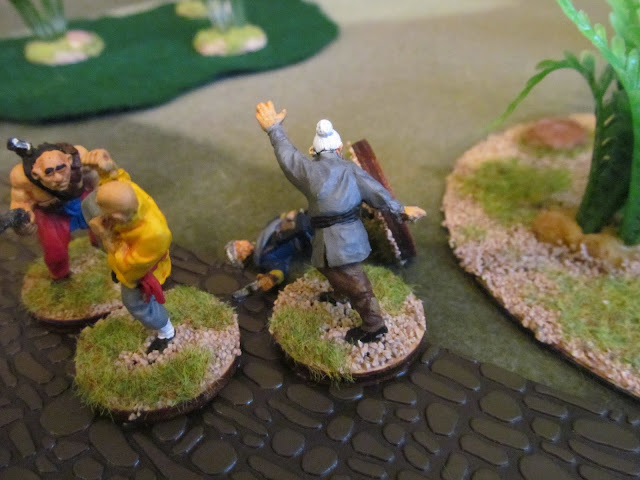 The sergeant is killed by the Master with the classic two fingers up both nostrils poke that paralyzed all of his nerves and exploded his nose at the same time. The last Imperial leader is down. 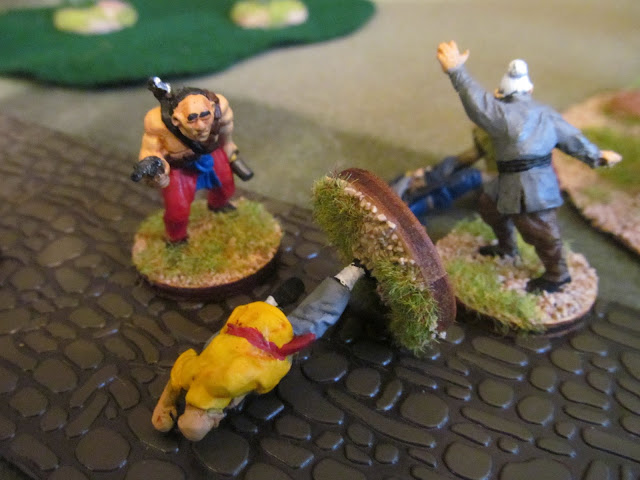 But the Shaolin takes a .45 right between the eyes. 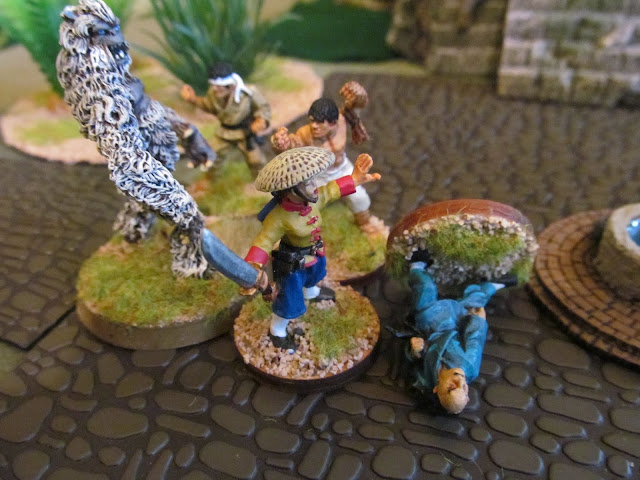 Bao is knocked down, but not out of the fight by Yu Niu. 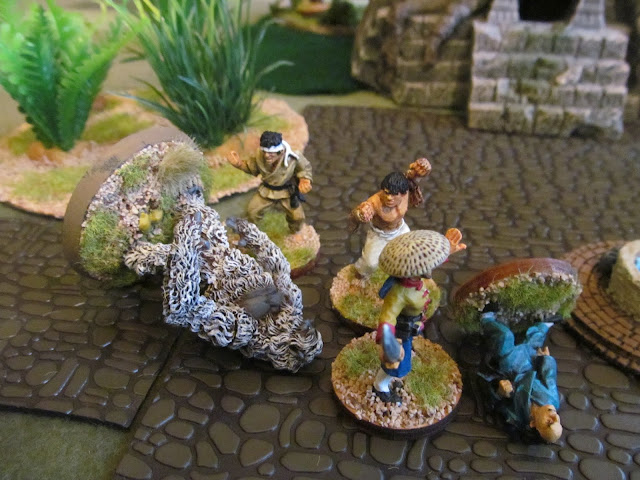 Lü Bu, The Harmonious Fist of Wrath, engages Yu Niu again as the epic struggle (definitely an Oscar nomination for choreography) continues. Oh, and yeah, the Karate Kid takes out the Yeti with a combination of "Cannot Defend" talent and a remarkable die roll. 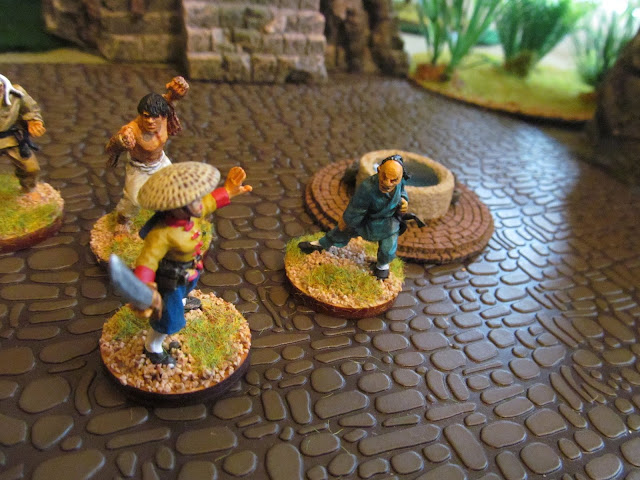 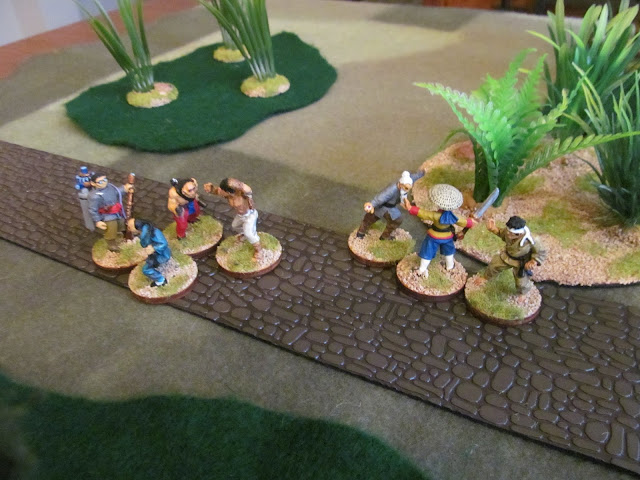 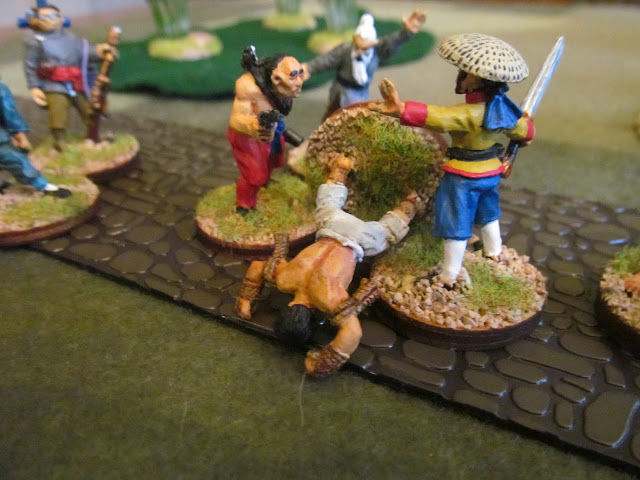 In a smooth move, Yu Niu blocks the Master (disengages) and attacks Lü Bu, The Harmonious Fist of Wrath from behind with her ssword while Sun Kai peppers him with bullets from the front. 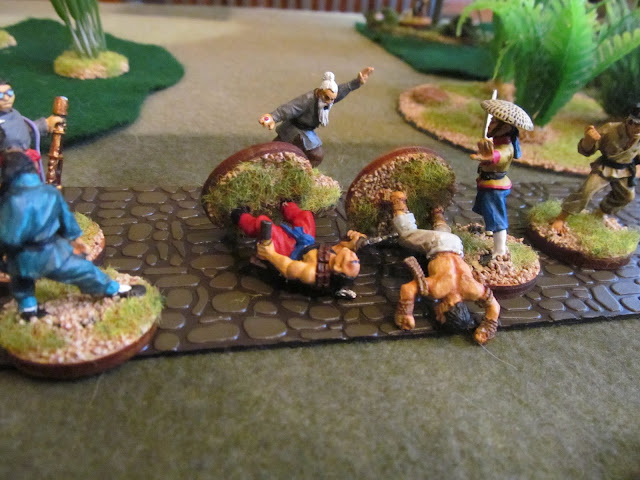 In revenge, the Master uses the "Wet Willie" move which instantly freezes Sun Kai's brain and knocks him down. 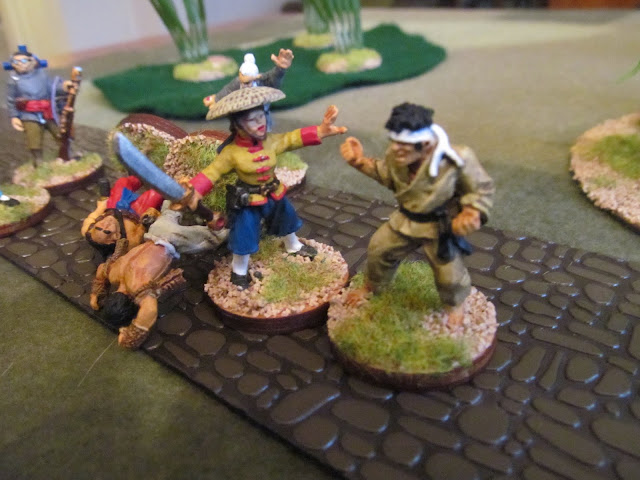 Discretion, being the better part of valor, the Karate Man decides to disengage. 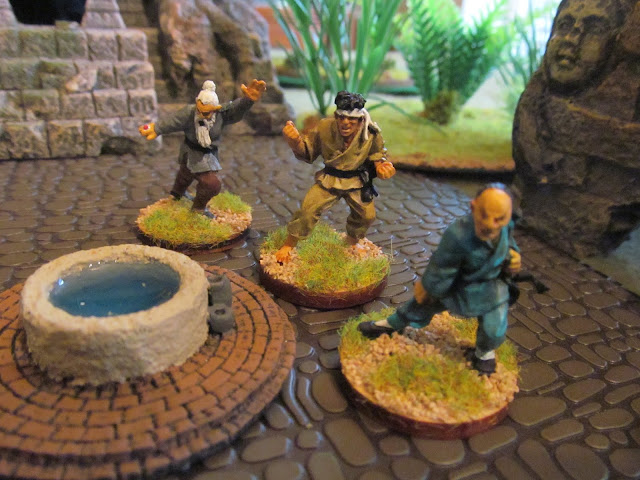 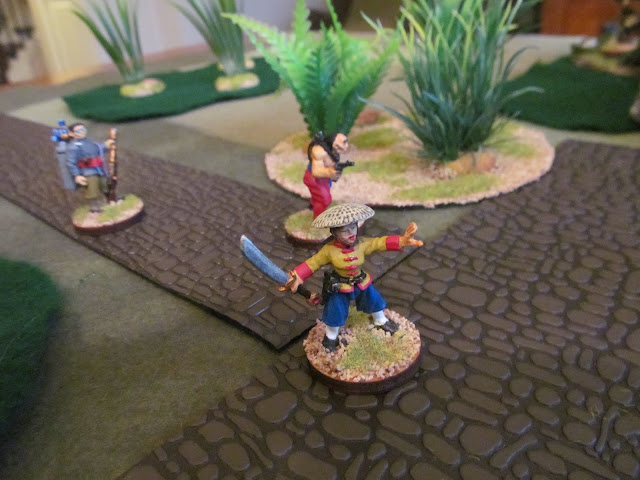 . . . while the last three of the Imperial forces look on. 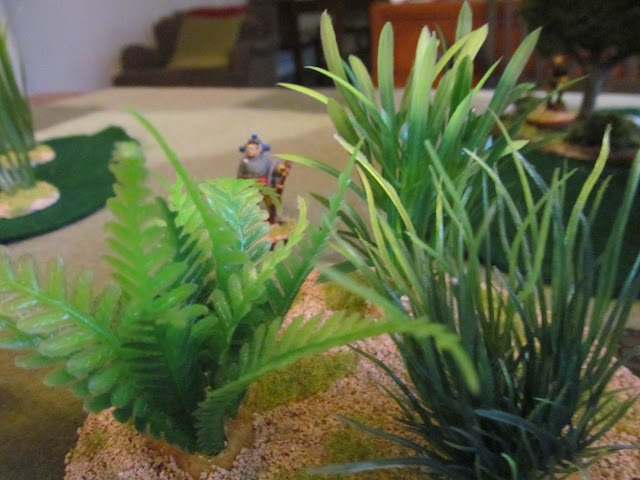 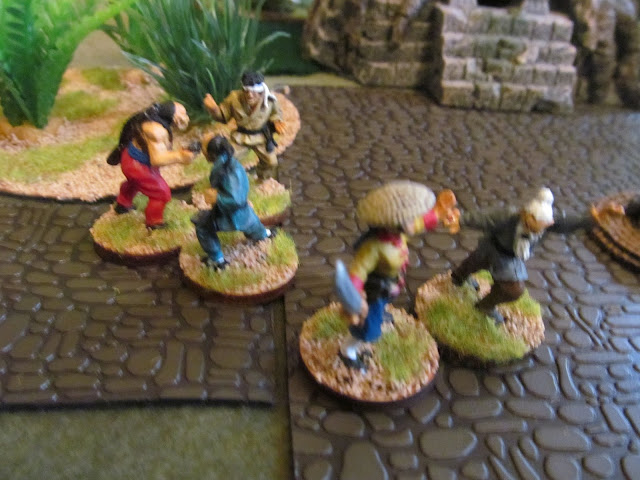 With a blur of speed the battle the last fight commences! (and that's the story I'm sticking with for the fuzzy picture.) 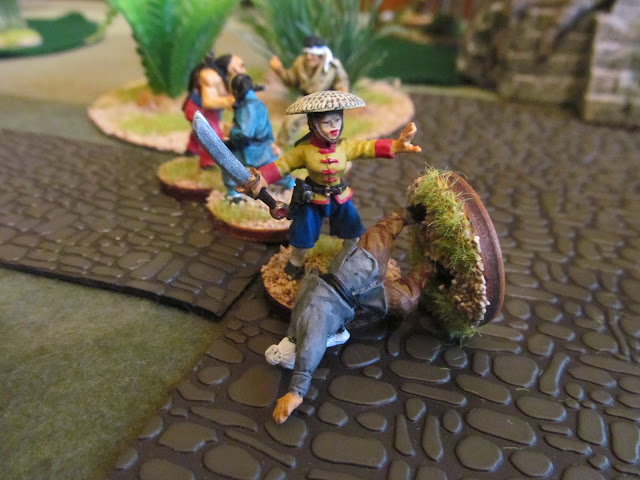 The Master, exhausted, falls to Yu Niu's blade of fury. 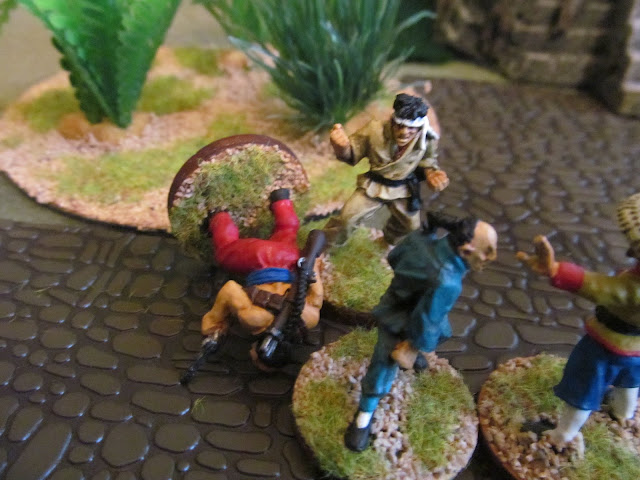 The Karate Man "boinks" Sun Kai in the eyes and takes him out while Bao blocks Yu Niu's attack. 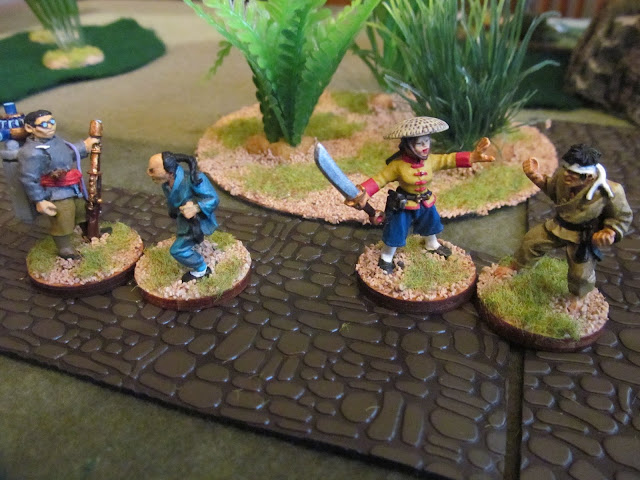 The final stage is set. 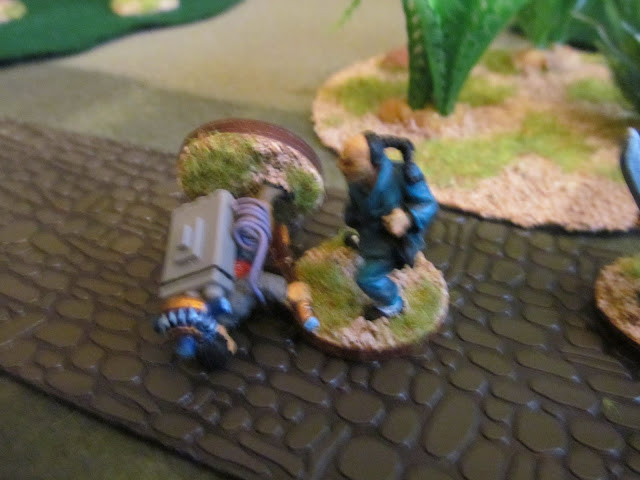 "Dang it. I never got to fire my arc rifle." 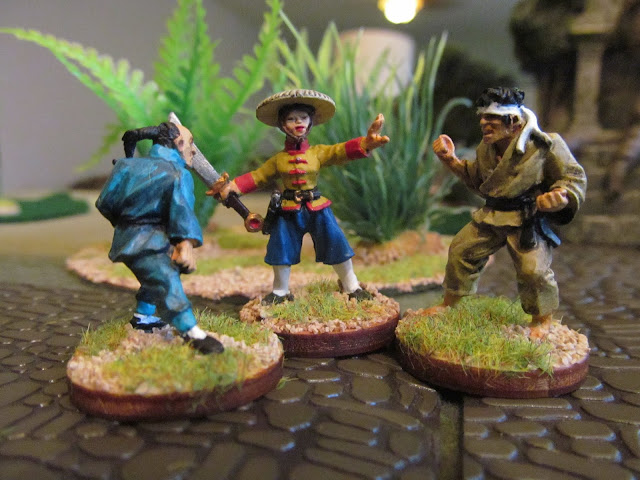 Legend tells of a legendary fight of legendary warriors whose kung fu skills were the stuff of legend against the legendary legend of the Chinese swords woman who was a legend in her own time. 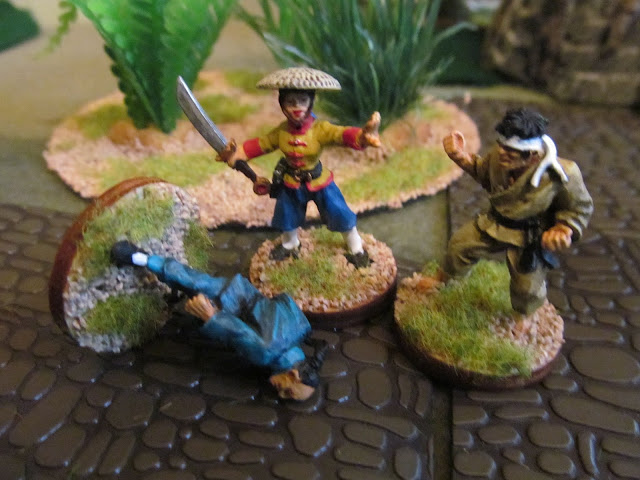 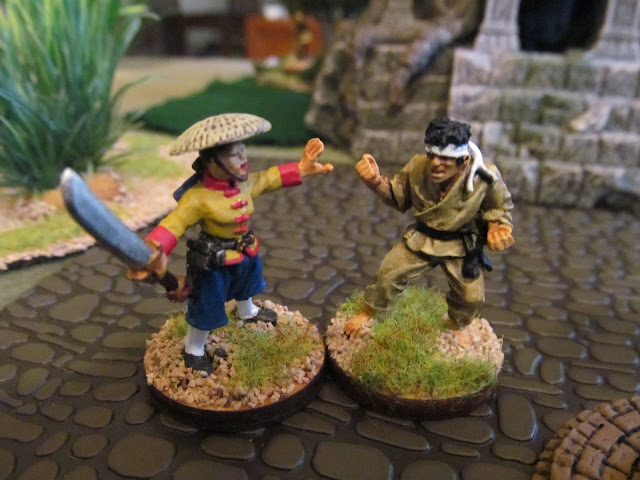 The last two standing. There can only be one. 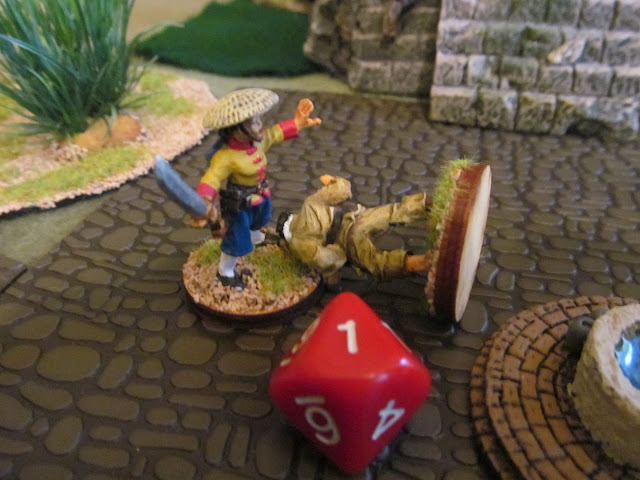 
Talk about a game that ebbed and flowed as one side then the other side had the advantage. The scenario was "Last Man Standing" from In Her Majesty's Name which we felt would be appropriate for a Hollywood or Hong Kong martial arts epic. Both sides were evenly matched, but the big mistake I made (I was the martial monks) was continuously using the Master's Meticulous Planning talent to take Yang Wei out of the game with his arc rifle. My opponent (after laughing I might add) pointed out after the Master left the game, "you know all of your figures only have an armor of 7. The arc rifle is useless in this game. You should have moved Yu Niu (the great swords woman)." You should have seen my jaw drop.  Looking forward to that rematch! 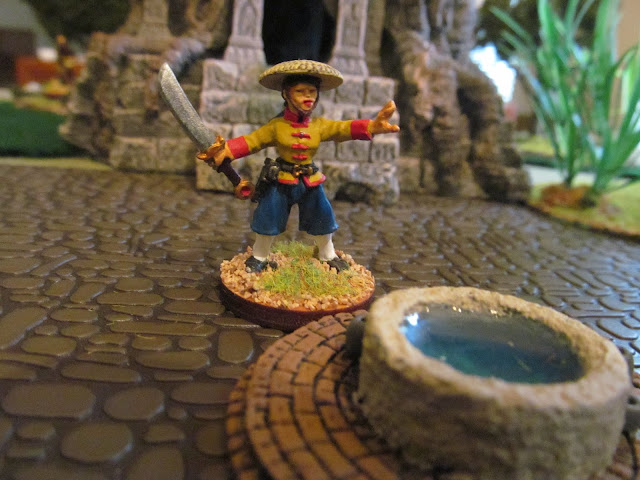 Yu Niu ponders, "Was it worth it?" 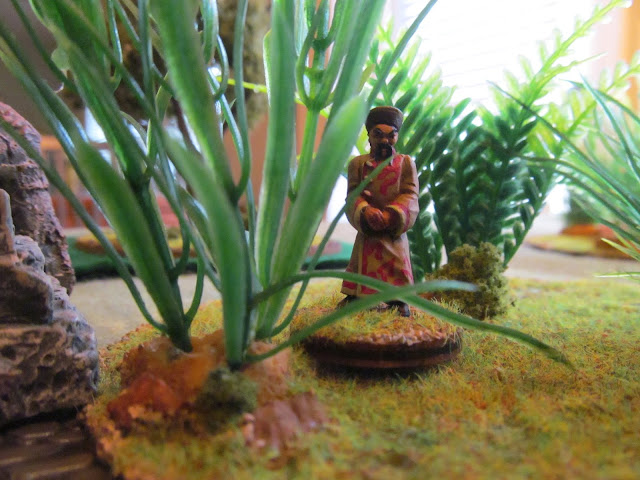 "BWAH HAH HAH! It was worth it and all goes according to my plans!"