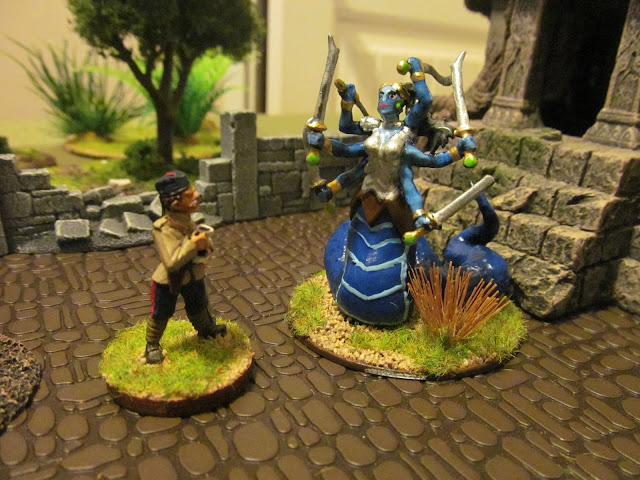 "Ummm . . . this is not what I was quite expecting," thought Captain John Watson, MD, Royal Medical Corps.


I was at the local gaming shop and noticed the D&D figures from WIZKIDS. Hmmm, I can use some of those for the gaming I'm doing. Most importantly I noticed the price: $5.99 US for the small packs and about $12 US for the large pacts. This figure is a small pack and is called Marilith. 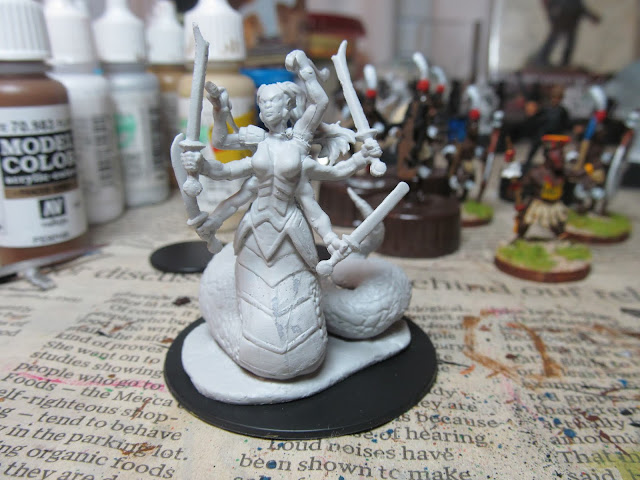 The resin figure comes pre-primed and with a flat base. 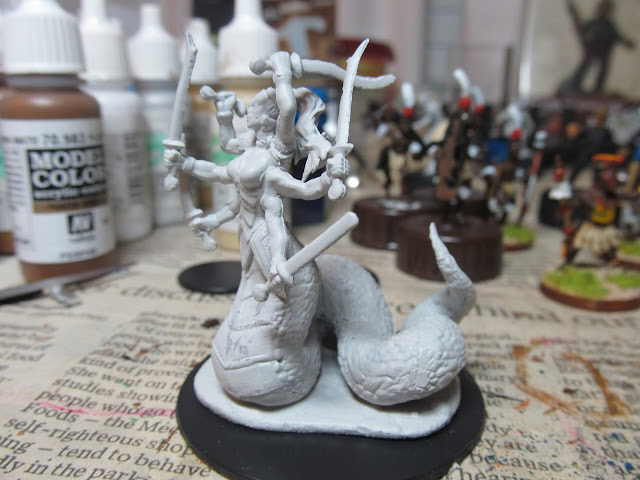 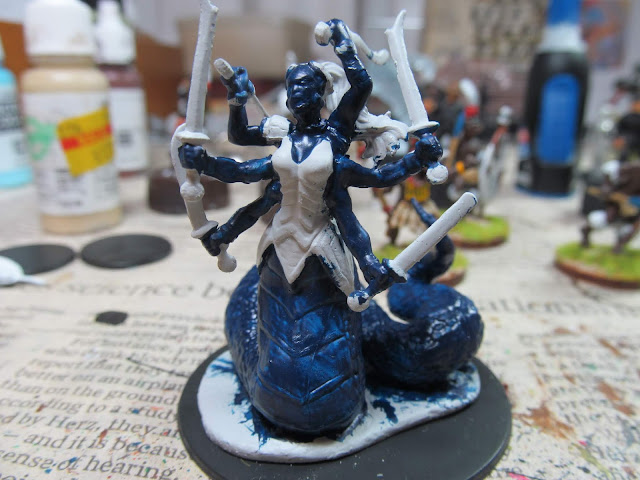 All paints are Vallejo unless specifically mentioned. I started with a base of Dark Prussian Blue for the skin. Not the mold mark in the front. Before I started painted I tried removing mold lines with small, fine files and just ended up making them look worse. Either I need practice with resin or . . . 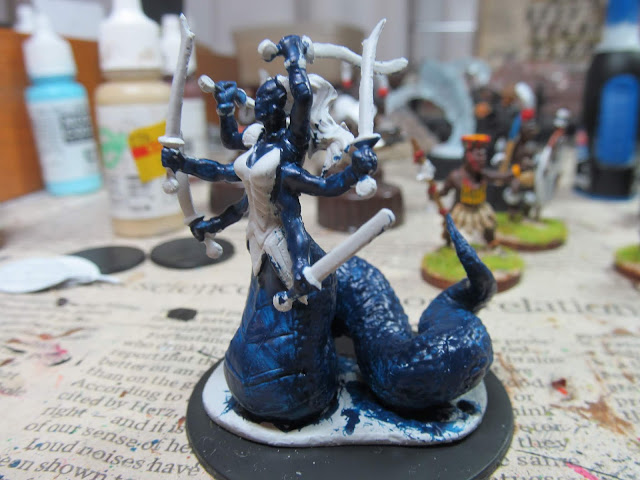 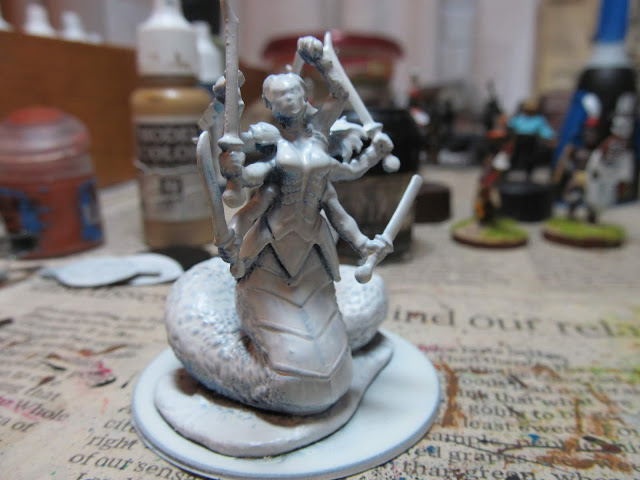 And then the knucklehead (me) accidentally spilled some red paint on the figure and had to prime it again with white. Unfortunately the prime obscured some of the nice details of the figure; especially the face. 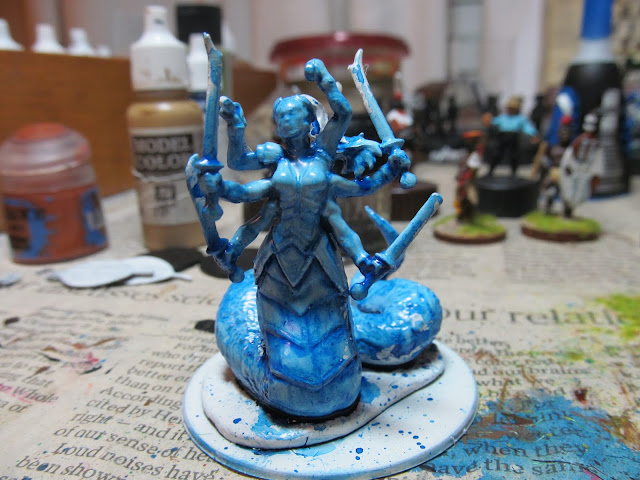 I decided to go with another color scheme and used Sky Blue and then GW Blue Wash over it. The wash was able to bring out some of the details but I still had too much paint on the face. Oh well. 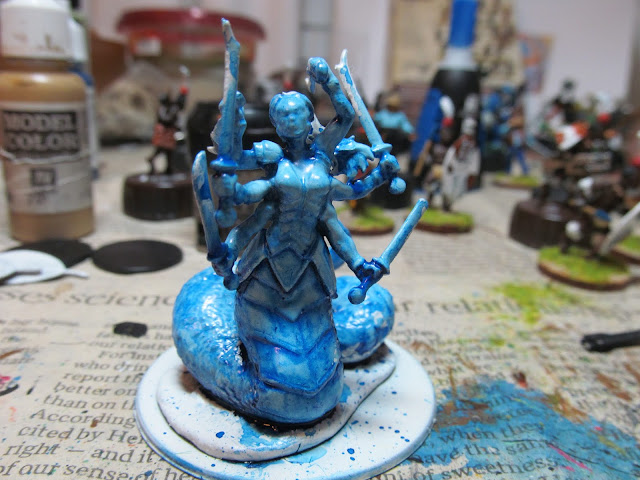 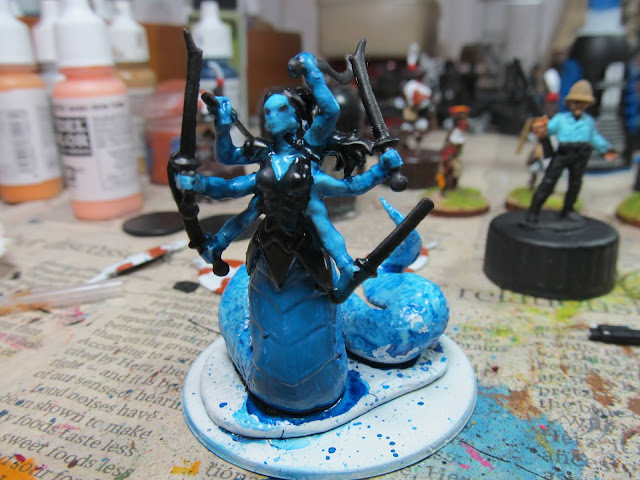 I like to use flat black for areas that will have metal. 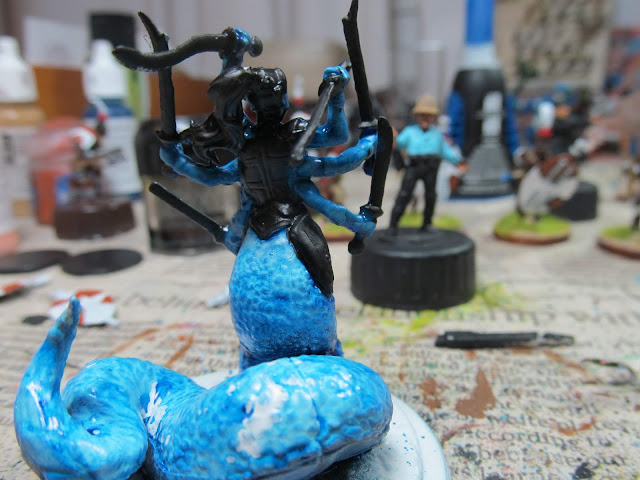 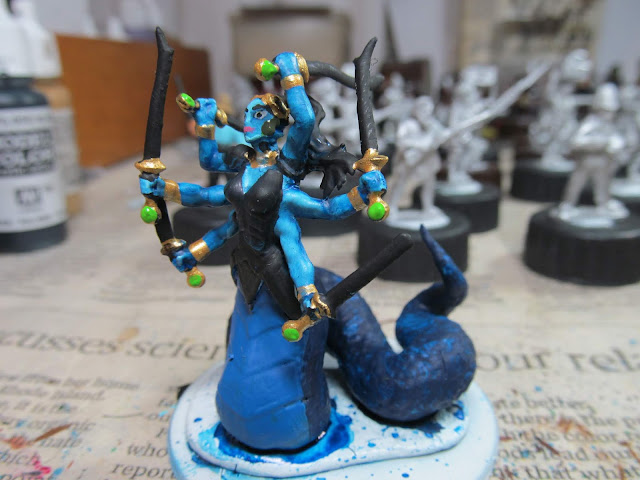 Details are being added and I noticed the resin "dot" on the front. Note the lack of detail on the face; again my fault for spilling the paint and priming the figure. 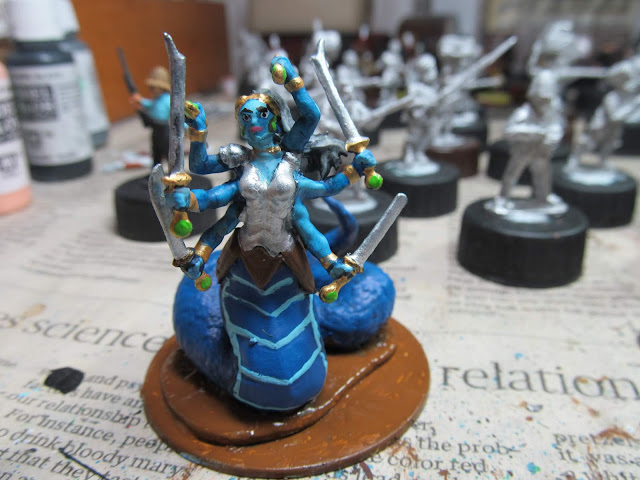 More detail and dang that dot! 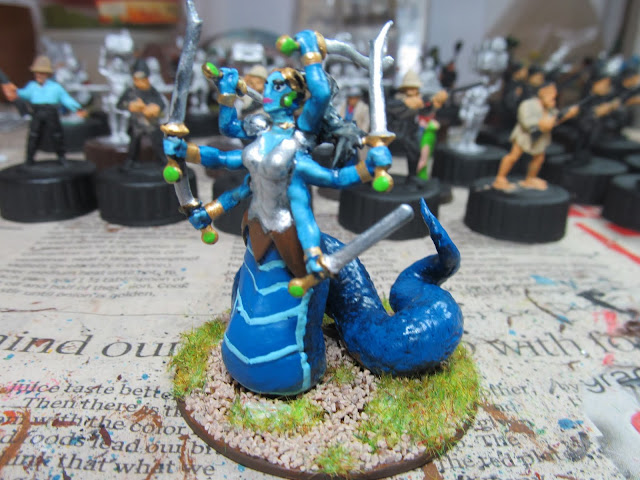 The figure is complete and the basing is almost done, The figure itself really does look better than how I painted it but it will still be a great addition to games like In Her Majesty's Name and other Pulp type games. 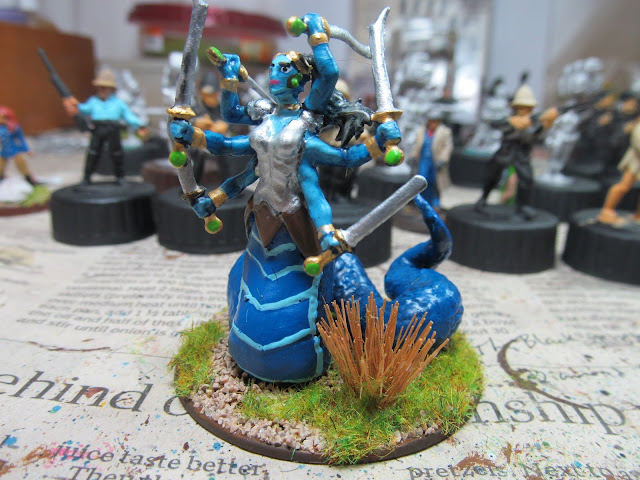 Decided to add some tall grass as I did not like that open area on the base.

So how does it look on the gaming table: 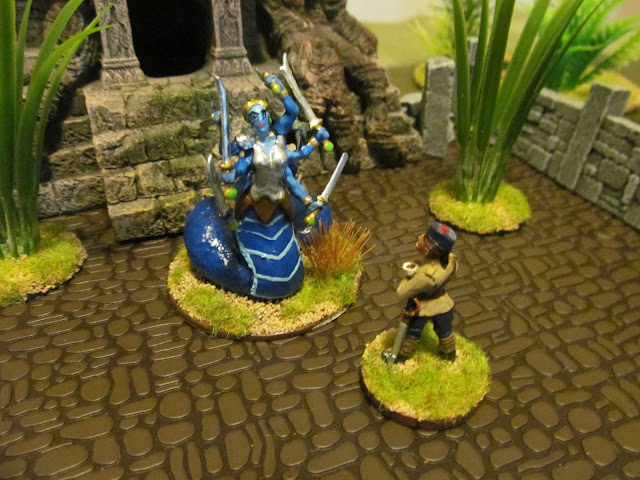 Dr. Watson is drinking his tea while he keeps up a stiff upper lip. 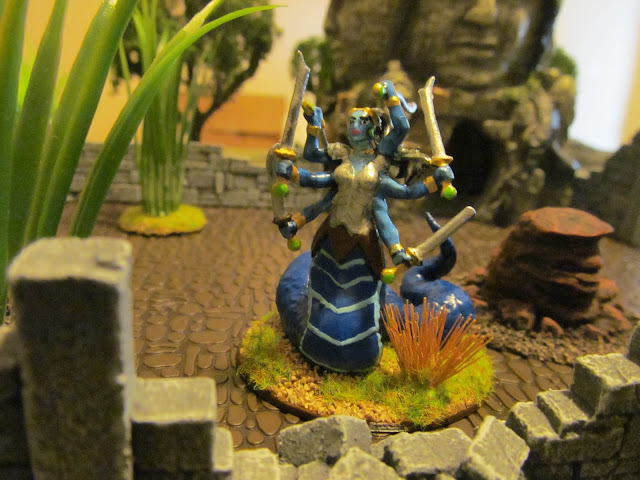 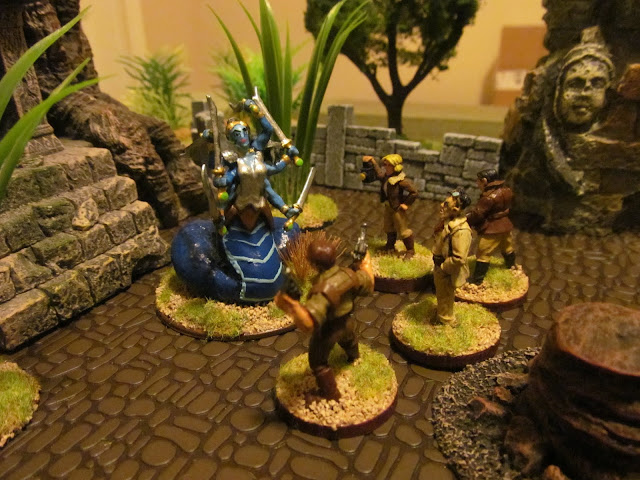 Some of the adventurers of Miskatonic Univeristy. 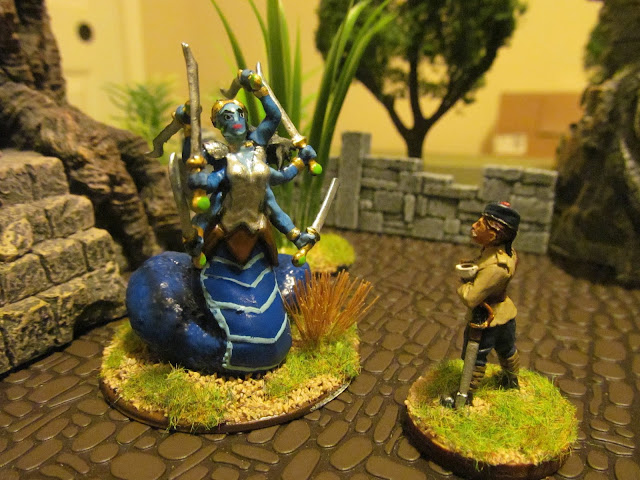 Not too bad and the scale looks great with my current collection of 28 mm figures, Currently I am calling it the "Slayer of Men" until I come up with a suitable inter-dimensional evil alien being name for it.
Posted by Neil at 6:04 PM