Shoot out at Goldend Nugget

Time for some action in the town of Golden Nugget. As mentioned earlier, the game is going to be played with the free rules Blaze of Glory found on the Free Wargames Webpage:
http://www.freewargamesrules.co.uk . I have found this site to be an invaluable source for rules, ideas and just fun. You can also go straight to the Blaze of Glory website here: http://www.blazeofglory.org.uk/rules.htm
Here is a description of the game rules using some material from the site:
Unlike many wargames Blaze of Glory does not have a turn system, where players alternate. It has a random turn system based on a set of cards. Each figure is allocated a number of cards relative to its level:
Level 1 0r 2 = 2 cards
Level 3 = 3 cards

Level 4 = 4 cards
The more heroic a figure the more cards
(For our game we used regular playing cards, one color per team, with the name of the character on the cards)
The cards are shuffled and placed to one side. The top card is turned and the player controlling the figure indicated takes his turn. The figure indicated by the turned card is referred to as being Active. This has done away with a player being able to make calculations as to what might happen in a certain number of turns. It leads to a fluid, sometimes nail-biting game.
A turn consists of moving then carrying out an action like shooting, fisticuffs, standing up or seeking cover. All figures in our game were on foot and can move 4 inches. This is a normal move and will not normally affect any actions taken. A figure may move over obstacles up to 1 inch in height or width with no penalty. Obstacles over 1 inch high would require a climb test, see below. After a figure has been moved the player may decide if he wishes to attempt to move the figure further, by making a run roll. In most cases the player rolls a d6 and moves the figure the number of inches indicated by the roll. Note running can have an impact on other actions, e.g., you may shoot when running but accuracy is affected.
Characters were also allocated HERO points based on their level; this allows them to make a second run roll, avoid falling and making miraculous escapes!

Shooting is the most common way for a character to attack another in BLAZE OF GLORY. The shooting rules are intended to recreate the atmosphere of the movies and the reality of fairly inaccurate weapons being used in pressure situations, by, in many cases inexperienced individuals. Any figure within line of sight and the weapon’s range may be selected as a target. A player should, and will usually go for the closest enemy, but this is not always the case in the movies so it is not here either. Weapon ranges are revolver 12", Rifle 30", Bow 24", shotgun 8" and throwing something (the occasional bottle or knife) is 6".

To hit a target a player must make a successful SHOOT roll by rolling equal to or less than his Shooting value. For example, in our game, Sheriff Dillon had a shooting value of 6, which is really good. As with all tests the S value can be affected by various conditions so before making a roll the player must refer to the following modifiers and apply any/all relevant ones.
The other factors used are Fisticuffs (self-explanatory), Reflexes (comes in handy when diving through windows!) and Nerves (will he run or will he stay?). In addition there special skills which can give your character a unique flavor and advantages: sharpshooter, dodge and weave, and nerves of steel to name a few.
This was Sheriff Dillon's breakdown:
Shooting:6
Fisticuffs:4
Reflexes:4 Nerves:4
Hero Points: 8
Special skills: Sharpshooter, True Grit and Pugilist (for details, see the rules at the link)

ON WITH THE GAME! 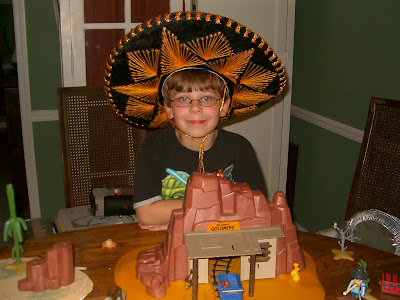 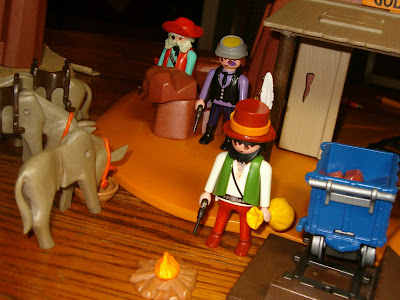 From left to right: El Dorado Jo, Reb and Curly Joe
Sherrif Dillon and Deputy Bill just happen to be nearby and yell at the villains to stop. 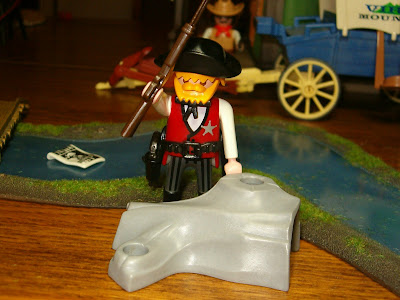 Deputy Bill yells "Stop you villains!" Well . . . that didn't really happen. The ole deputy is a bit trigger happy and just started shooting.
The villains reply with gun fire and force the Sherrif and his loyal deputy to take cover. Meanwhile, from on top of the Sherrif's office, Mr. Davy and Mr. Dynamite, loyal employees of McLaren's mine, open fire on the villains forcing Curly Joe and Reb to take cover near the mine's entrance. El Dorado Jo and Joe Mudd move to better positions to cover Curly Joe and Reb. As Deputy Bill peers above a log, Jose Chavez, who had been hiding on the high ground beside the mine, aims his Winchester rifle and drops Deputy Bill in his tracks! 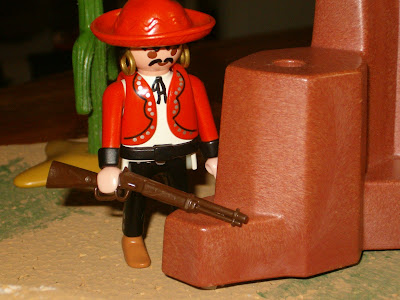 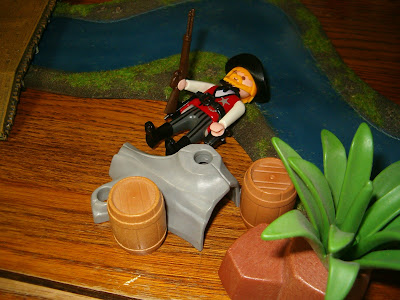 Deputy Bill is on his back to show that he has been wounded.

Sherrif Dillon, dismayed at seeing his long time companion fall, raises his rifle and plugs El Dorado Jo! Not only did he hit him, he nailed him dead. Now . . . here's where some gaming came in. I knew my minions Curly Joe and Reb might run away if they saw there boss lying in the dirt with a bullet in him. So I used one of El Dorado's "hero points" to make a roll to avoid his untimely demise early in the game. The roll was successful and the bullet was deflected off of El Dorado's whiskey flask adding more to the legend and mystique of El Dorado Jo!

As the bad guys dash to the bridge over Snake Creek, the rest of Sherrif Dillon's posse springs into action. Both Ranger Joe (intrepid mountain man) and Deputy Soap are in the Golden Nugget Saloon. They both decide to climb a ladder to the top of the saloon to get a better shot at El Dorado Jo's gang. Unfortunately, it appears Deputy Soap might have been partaking too much in the saloon prior to the shoot-out and he stumbles and falls off the ladder. Deputy Soap will remain there for the rest of the game, much to the disgust of Honorable Son #5. 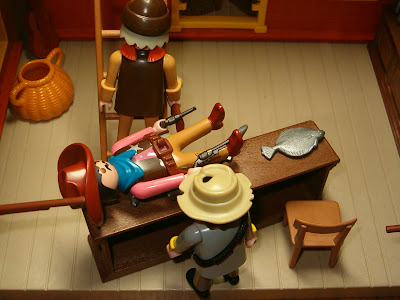 Meanwhile, Mr. Dynamite nails Reb and in the best tradition of Hollywood, falls into a wagon. 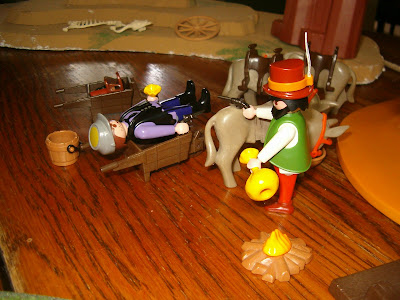 Reb will recover ("It was only a flesh wound!") as the lure of the gold keeps him going.

El Dorado Jo decides to make a dash for it and dodges and weaves as bullets pepper the dirt around him. At one time he pretends to be hit, only to jump up and shoot and wound Mr. Dynamite. Sherrif Dillon, pinned down by fire, continues to crawl to the left trying to get a drop on the villains. As the villains make it to the bridge, Ranger Joe starts to fire and hits and wounds Joe Mudd - putting him out of the game.

Jose Chavez continues to fire accurate long range fire, keeping the heads of the good guys down. He knows that the plan is not for him to go through town but to meet up with his boss later. As the bushwackers cross the bridge, the intrepid Deputy Bill, bandage and all, jumps up from his cover and with rifle a blazing, drops Reb in his tracks and makes Curly Joe dive for cover. 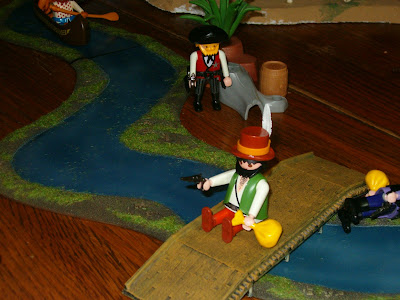 El Dorado has made it in to town; seeing Mr. Davy exiting the Sherrifs office he fires a hail of bullets in his direction - appearing to kill the brave, but unfortunate young whipper snapper. El Dorado Jo smirks in triumph as he abandons his pawns and waves to Baron von Furstenberger.

As the game comes to a climax (you can almost hear the dramatic music in the background), Sheriff Dillon gets the drop on Jose Chavez and puts him out of action. 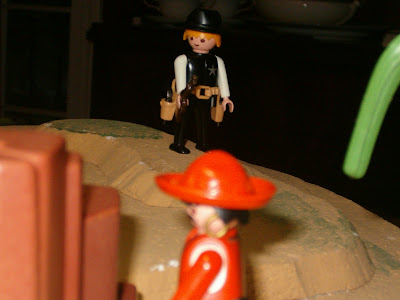 Curly Bill attempts to end Deputy Bill's contribution once and for all - but is hammered across his skull by Deputy Bill's revolver (the only fisticuffs in the game!). 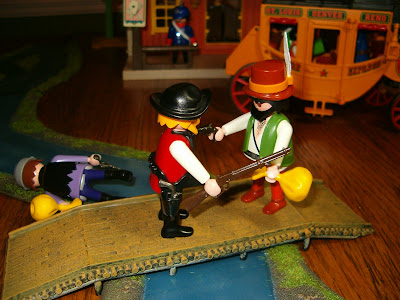 And just when El Dorado Jo thinks he is safe with the gold, Mr. Davy (the bullet had hit his Bible) jumps out from cover, wounds El Dorado Jo and administers a citizen arrest. 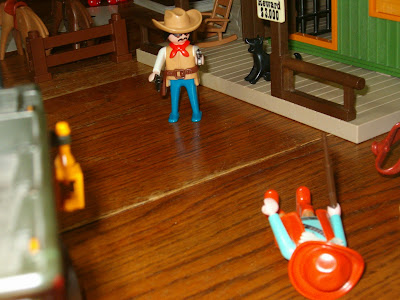 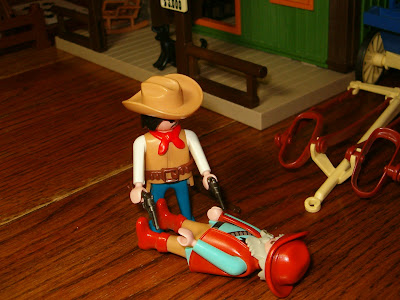 You're under arrest, Pilgrim.

A good game? You bet! Fast and easy to play; but a rule set that I suspect will be hard to master. The randomness of the cards added an exciting element to the game - just like in real life; you don't wait for your opponent to make his move. 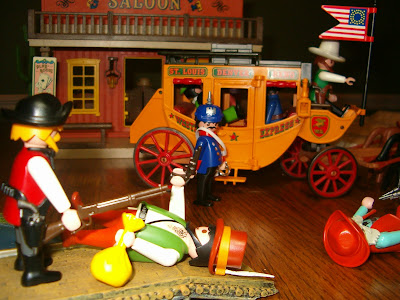