I'm starting to make progress on the Rifle Companies of the 1st Battalion, 79th Naval Infantry Brigade. The start of the 1st Company is coming along a little slowly, haven't painted a lot the last few weeks but I was able to finish the Company Headquarters and part of the Rifle/MG stands: 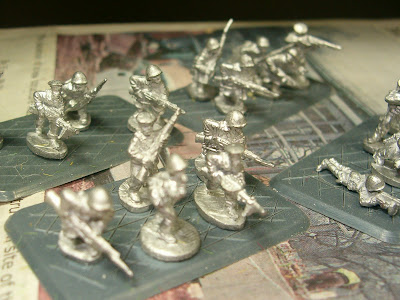 I've recently started to paint my WW II Flames of War miniatures on the actual stands. Before, I used to put the figures on craft sticks to give me enough space between figures for painting. I've gotten used to painting them on the stands and it actually saves me time with priming all of the figures and bases.
Before I start painting, I figure out which figures will go on which stand by unit. I like to position the figures for a unit at the same time to get the feel and look of the unit. Above are actually figures and stands for the Second Company. I have mixed and matched figures from the Naval infantry, Infantry in greatcoats and the Submachinegun packs.
Before I mount the figures, I scour the stands with a hobby knife which helps the glue and texture (pumice) adhere to the stands better. I use just regular ole' superglue to mount the figures. 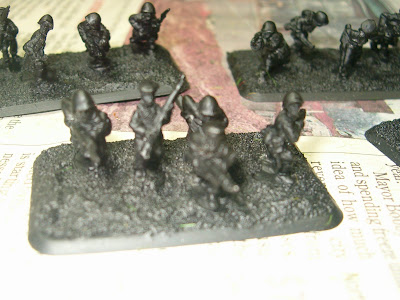 I have found hobby pumice to use easier than hobby sand for the base texture; easier to apply and easier to paint. To see my standard "terrain" for bases see my post on January 2nd, 2010 "Let's Finish the Bases." After I applying the pumice (a resin - pumice mix that is easy to apply and paint) I let it dry overnight and then spray paint it with black primer. As I have mentioned on previous blogs, I don't by fancy primer from hobby manufacturers or stores, just good old Krylon flat black primer from Wal-Mart. Much cheaper and just as good. 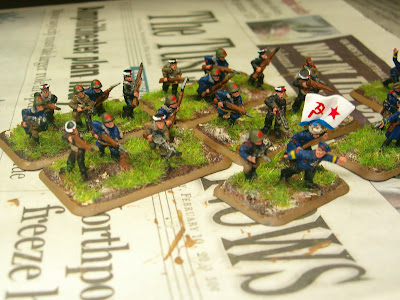 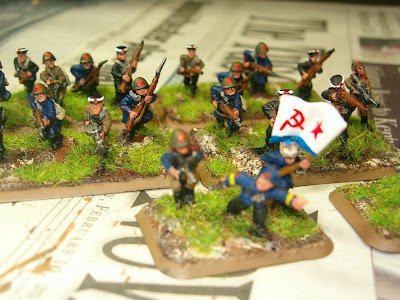 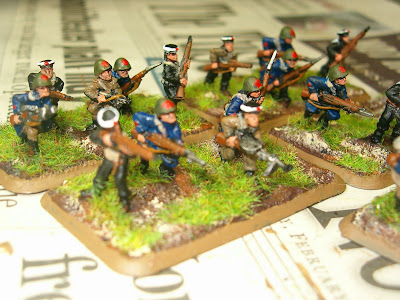