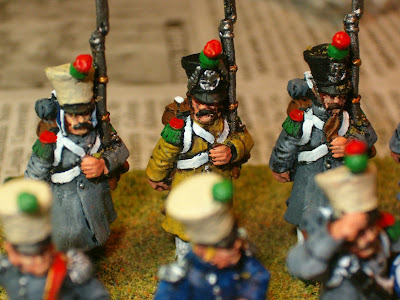 One of the great thing about being the Commander-in-Chief of my miniature forces, is that I get to choose the priority of mustering, supply and deployment (subject to the Minister of Finance, a.k.a. my lovely bride) of said forces. In other words, I usually paint what I want to paint. I usually have multiple projects and periods going on at once; it prevents me (or so I tell myself) from getting too bored with any one period. 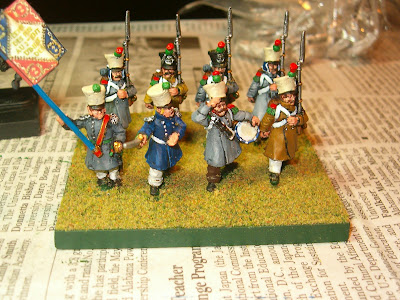 I took some extra vacation time this last week in conjunction with Honorable Son #2's high school graduation and the Memorial Day weekend. Not only is the extra family time great, but I was able to get another unit raised for the Emperor Napoleon for service in Spain and Portugal. I'm slowly building up forces for both sides in the Peninsular War of the Napoleonic Era. As mentioned in previous blogs, I'm using the outstanding Volley and Bayonet rules which focus on "grand" tactical. 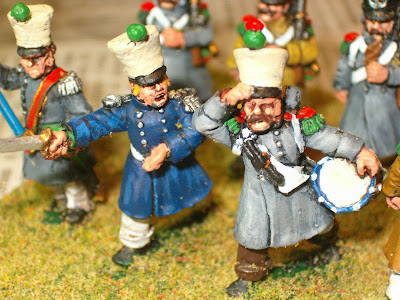 One of the things I like about Volley and Bayonet is that it works with any scale of figure. For the War of Spanish Succession, I use 15mm figures; for the Napoleonic Wars, 28mm is my preferred scale. The size of the figure does not matter, it's the size of the base. Bases can be made smaller and measurements adjusted if space is at a premium. For my Napoleonic forces, I'm using the recommended base sizes which is 3" x 3" for an Infantry Brigade. Though the Brigades represent multiple units, I model the stands as one unit. For standard infantry units, I usually model 8 figures per base. The figures for the 2nd Light Infantry Regiment are from Wargames Foundry. 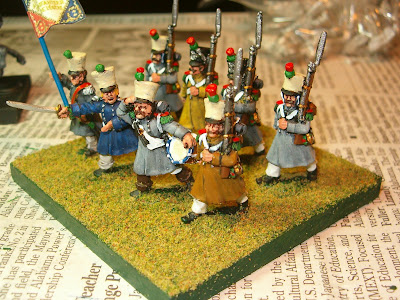 The 2nd Light (2 Infanterie de Legere) participated in the following major battles/campaigns outside of Spain: Austerlitz, Friedland, France 1814 and the 100 days as part of II Corps, Armee du Nord. For the theater of operations I am interested in, the 2nd Light fought at Rolica, Vimiero, Corunna, Busaco, Sabugal, Fuentes de Onoro, Salamanca, Vittoria, Nivelle and Nive.
VALEUR ET DISCIPLINE