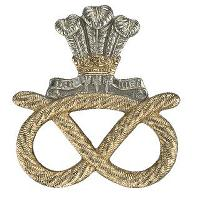 In the spring of 1985 as a first lieutenant I was the the Executive Officer (XO) of Combat Support Company (CSC), 2nd Battalion, 47th Infantry. At that time, 2/47 Infantry was part of the 9th Infantry Division at Fort Lewis, WA. When I was the XO of CSC our battalion hosted the Staffordshire Regiment for combined training. Little did I know at the time that an ancestor of mine had served with that unit during the Peninsular War!

Battle Honors for the Peninsular War are: