First of all, a special hats off and thanks to Honorable Son #5 for his help in taking the pictures below!

I've decided to paint some of the "King of Battle" for my Napoleonic British Peninsular Army. I take a long term approach to building my armies due to budgets and painting time and get most of my miniatures from eBay (unless I'm struck by the "oh my gosh I have to get that shiny new toy now!' syndrome). A few years back I picked up 2 blisters of Wargames Foundry's British 9lb field guns and two blister packs of British Royal Artillery crew.

For the most part I like the quality of the Wargames Foundry ranges; the overwhelming majority of my Late Roman armies are Foundry. Personally, I feel now that they have priced themselves out of my market - but that's why there is eBay! 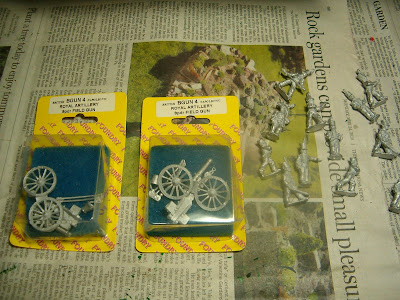 After opening the blisters, I really liked the model of the gun; minimum flash and all of the proportions looked correct. The front of the gun barrel had some flash and mold lines that would be hard to fix with a hobby knife - more on that later. The figures . . . well, they are not in my opinion the best modeled and animated figures. In fact, I'm not quite sure yet how I'm going to mount them on the stand; in fact, I'll probably paint a few extra. The officer in bicorne is excellent and I used one earlier for my Duke of Wellington command stand. That's him with the telescope. 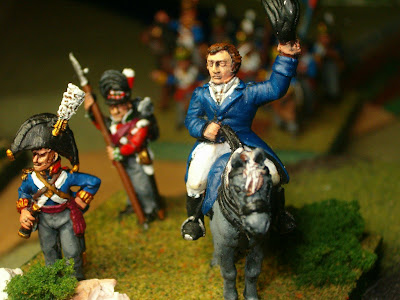 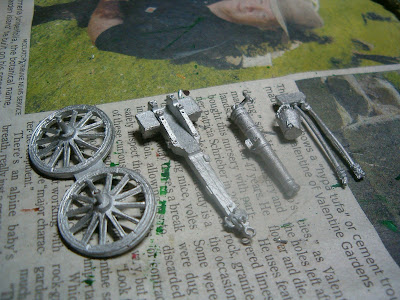 As usual, I applied a flat black primer over the gun models. Through the years, I have found it easier to paint the separate parts and then put them together. And yes, I will put the labels on the stands before I mount gun and crew! I still can't believe that it took me about 7 years to figure that out. 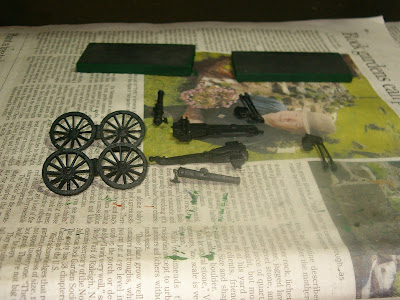 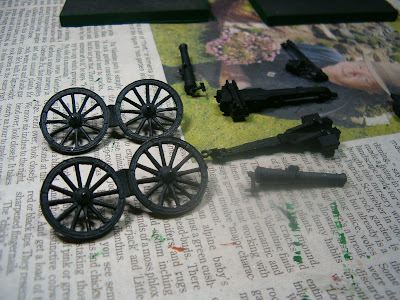 As I mentioned earlier, there was flash and a mold line across the front of both barrels. One of the best investments I have ever made was purchasing from Games Workshop a hobby drill for I think about $15.00. Using the tool I was able to drill out the flash and mold lines and in the process make the barrel look more realistic. 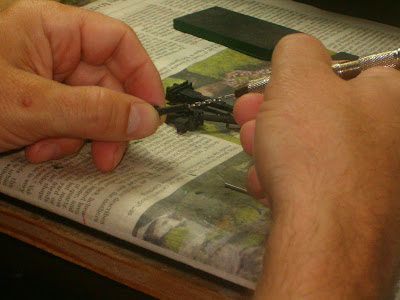 Now that the guns have been "prepped", it's time to paint. I did some research yesterday on what the wooden carriages and metal parts would look like. Almost immediately, I found a great new blog to follow Miniature Wargames with a timely entry on the guns:

After more research and my own experience, I will be closely following the colors from Miniature Wargames.
Posted by Neil at October 12, 2010