The Adventure of the Jewel of Chance

We have had some dramatic entrances and exits upon our small stage at Baker Street, but I cannot recollect anything more sudden and startling than the first appearance of Viscount Greystroke in the summer of 1895. Only now, at the end of nearly ten years, am I allowed to supply those missing links which make up the whole of that remarkable adventure that took myself and Mr. Sherlock Holmes to an unexplored region of Africa . . . from "The Adventure of the Jewel of Chance" by John. H. Watson, M.D. 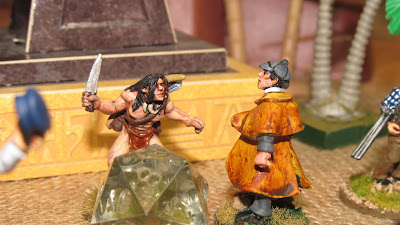 Honorable Son #5 is a fan of skirmish gaming and I'm a fan of Sherlock Holmes, the books of Edgar Rice Burroughs and other fantastic tales of the late 19th Century.  Since he is such a great son, I am putting together a special scenario for him using the rules In Her Majesty's Name.  Below are a few of the shots as I worked out the play balance and I hope to have a complete "dispatch" of the adventure penned by Dr. Holmes later this summer.  The scenario will involve Lord Greystoke and Sherlock Holmes attempting to stop a villainous gang hired by Dr. Moriarty to steal the legendary "Jewel of Chance." 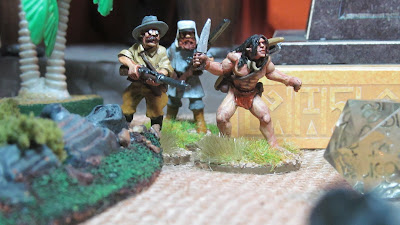 The mysterious American adventurer known as "TR" is backed up by ex-legionnaire officer Pierre Jean Alban as they cautiously advance behind Lord Greystoke. 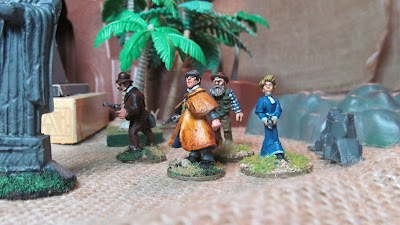 Dr. Watson, Lady Gwenda Hughes and Boer hunter Hans Rynsburger following Holmes' lead as the come across the temple plaza in the lost city of Opar. 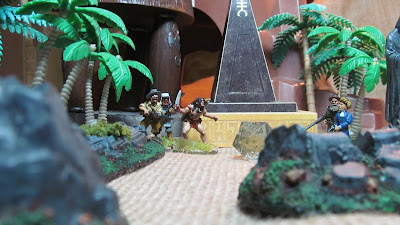 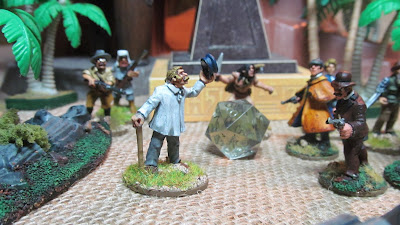 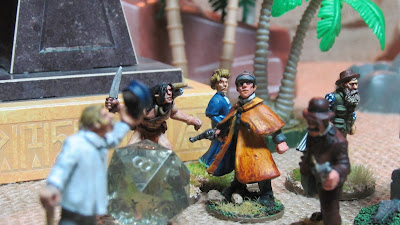 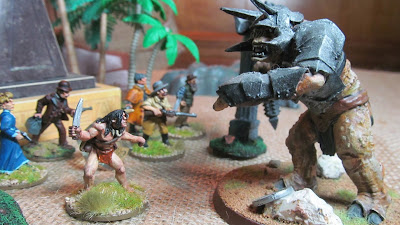 The fearless Lord of the Jungle advances while his companions take up positions trying to get in a shot. 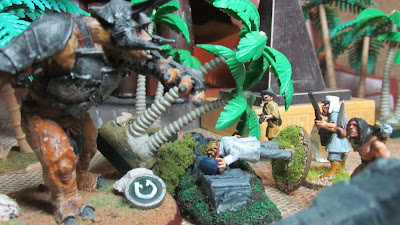 The creature is faster than at first thought and knocks a tree down injury Professor Nightingale!  And what is that new sound coming from behind the obelisk . . .

As can be see from the photos, we are using odds and ends of what we have at the house: Wargames Foundry Figures, a Mordor troll from Games Workshop, Playmobil scenary, plastic trees from toy animal toy bags, etc., with some more surprises to come!  I believe that it will be an entirely entertaining, legendary adventure that Dr. Watson will pen and share with us.
Posted by Neil at 6:56 AM

Labels: Games Workshop, In Her Majesty's Name, Lord of the Rings, Wargames Foundry