The Bavarian Army for the War of Spanish Succession Part 1

My War of Spanish Succession army collection are the oldest painted figures in my collection.  The figures were painted from 1992 - 1995.  Originally they were mounted for Warfare in the Age of Reason but then I discovered Volley and Bayonet (VnB) in 1999 and remounted the figures for VnB.  The armies that I did are British, Dutch, French, Bavarian and Imperial. The figures are 99% Dixon Miniatures in 15mm with a few Hallmark and Editions Brokaw.  First up is Bavaria. 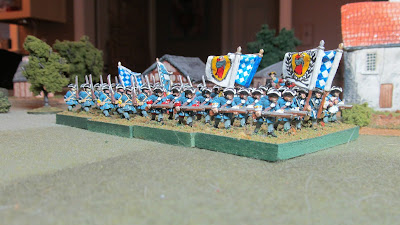 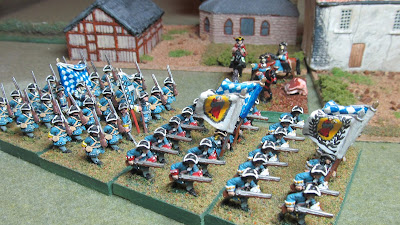 When I mounted them I decided to mount them on a reduced frontage of 2 1/2 inches instead of 3 inches because that was the width of the wood I had!  I liked "Kreigspiel" look of the taller bases at the time though eventually I will probably remount them on thinner bases. 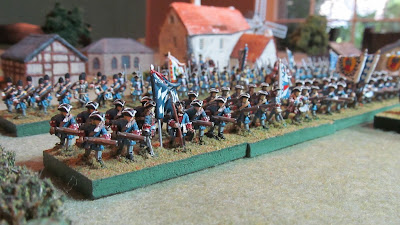 For the War of Spanish Succession (WSS) the bases represent regiments consisting of multiple battalions.  There are no formations to worry about - that's what your subordinate commanders should be worrying about.  The base is the "foot print" of the unit; as the army and division commanders you just point them in the right direction and say charge! 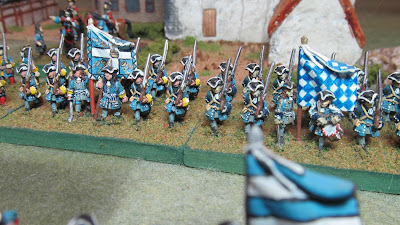 VnB is a fast play game that allows you to recreate large battles.  To me it gives the feel of linear warfare.  The original rules are designed for 1700 - 1900 but I have yet to play another period with them.  I now have the latest addition, Volley and Bayonet: Age of Glory which has greatly improved an already great set of rules. 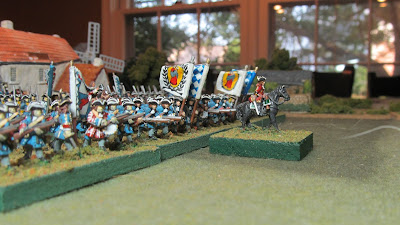 The commander pauses when confronted by a giant piece of dog hair. 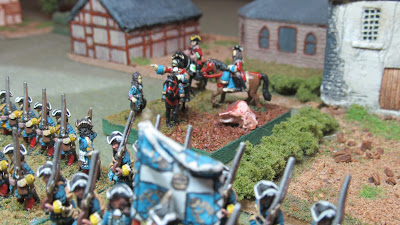 Next up will be a detailed breakdown by unit of my Bavarian Army with a little bit of history thrown in for fun.
Posted by Neil at July 09, 2015