Following the Roopkund Lake Incident with Chinese Imperial Forces, in which the Gordan Highlanders and the 14th Sikh's under the overall command of Colonel Dugald Armstrong, VC, DSO, etc., fought off and defeated mysterious elements within the Chinese forces, it became apparent that more specialized units, like the Shanghai-La Fusiliers would be needed in India. The 14th Sikhs earned battle honors at Lucknow, 1878 Afghanistan, 1878 Ali Masjid, Defence of Chitral 1895, (Roopkund Lake has been neither confirmed or denied) and was an obvious candidate to train in more specialized tactics. 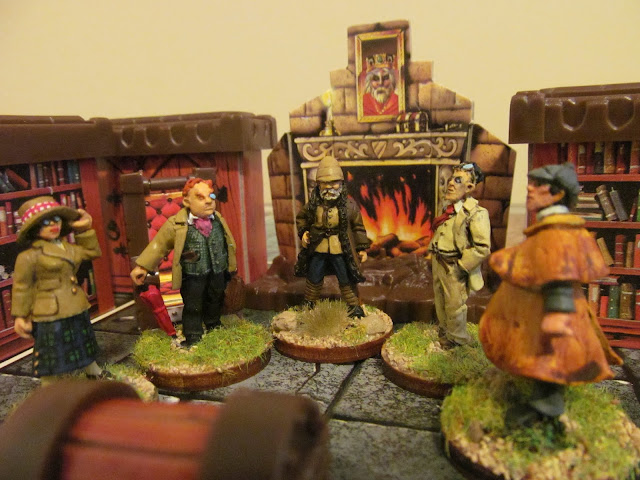 The decision is made.


Colonel Armstrong took his concerns to "the government" and it was decided to experiment with some of the most prestigous units in the Indian Army and that they would receive the latest technology and experimental weapons. The first unit chosen, of course, was the 14th Sikh's.


As the 14th SSAC will be a small, fast moving elite unit, it was decided to provide them several experimental weapons: 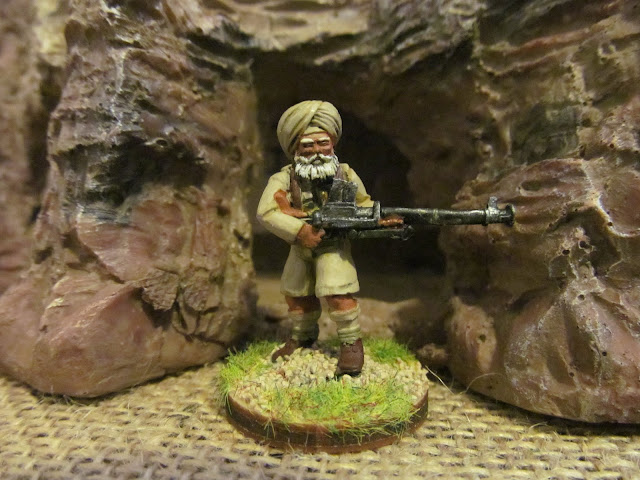 Beware the old man in a young man's profession.

SV Bonus: +5 (Built in Monocular Targeting Array)
Range: 36"
Hands Required: 2
Pluck Penalty: -2
Cost: 23
Notes: User must have the Hunter Talent (5 points), if not, it is only a Military rifle without a bayonet. As a experimental weapon, if you roll a fumble on a D10 (a natural "1") you must roll twice instead of the normal once. The soldier may also have the Marksman talent for 5 points. 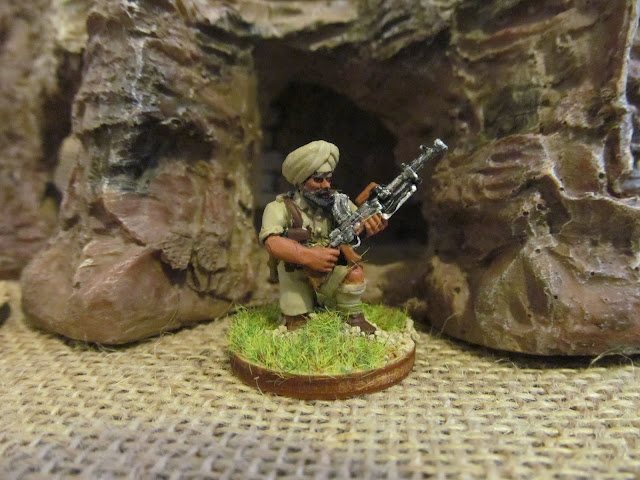 
The Brimble "Bumble Bee" Light Machine Gun was an idea by Professor Brimble Nightengale for a portable, mobile machine gun capable of being operated by one or two men that could use its high rate of fire to pin down enemy troops and machine guns.

SV Bonus: +5
Range: 24"
Hands Required: 2
Pluck Penalty: -2
Cost: 15
Notes: As a experimental weapon, if you roll a fumble on a D10 (a natural "1") you must roll twice instead of the normal once. Instead of a Military Rifle the soldier will carry a pistol instead for 3 points. 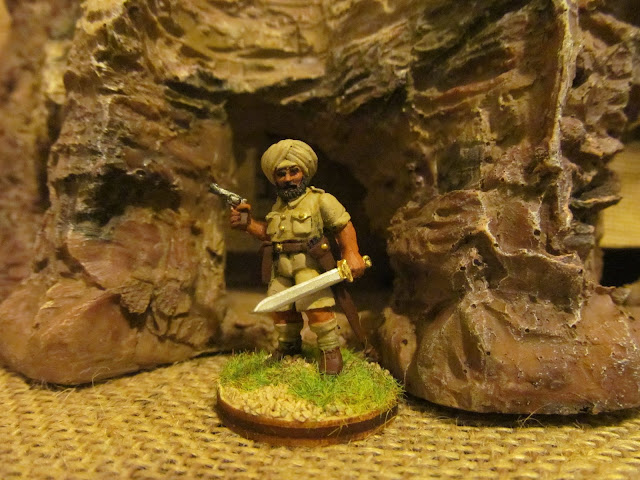 Subedar Bikram Singh, IOM, is a rising star in the Indian Army. As a young student, he considered becoming a doctor. He was an exceptional student of Zoology and Biology. But the wars of the late 19th Century motivated him to join the army. When asked whether he ever regrets the choice made, Bikram said, "If I were ever to be born again, I would only join the Indian Army." Colonel Armstrong remembers him for being a 'soldier's soldier' for spending time and working hard with his troops on the ground. Bikram Singh also carries the Khanda Sword of Justice given to him by his father, Subedar-major Ranjit Singh. 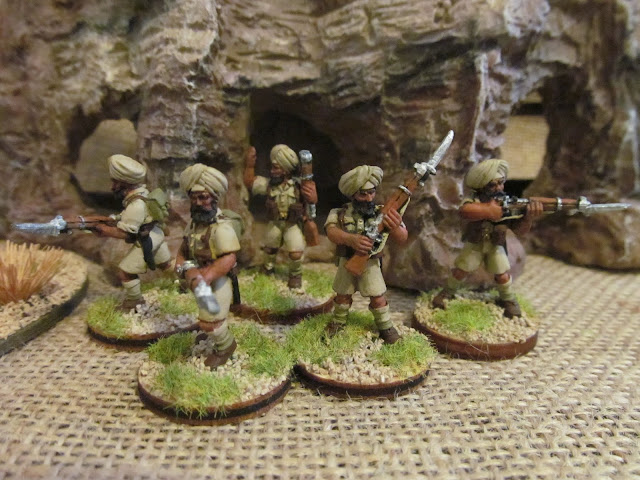 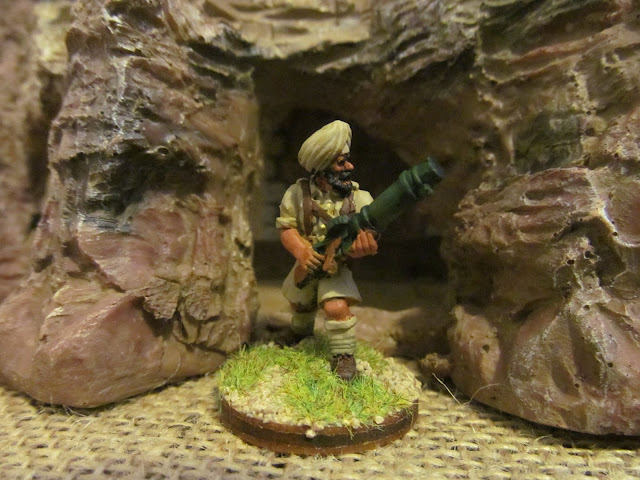 One 14th Sikh SSAC can be upgraded to a Sapper by adding the Engineer Talent (5 points) and increasing Shooting Value to +2. The Sapper may have a Congreve Rocket Gun (7 points) and three rocket grenades costed by points. 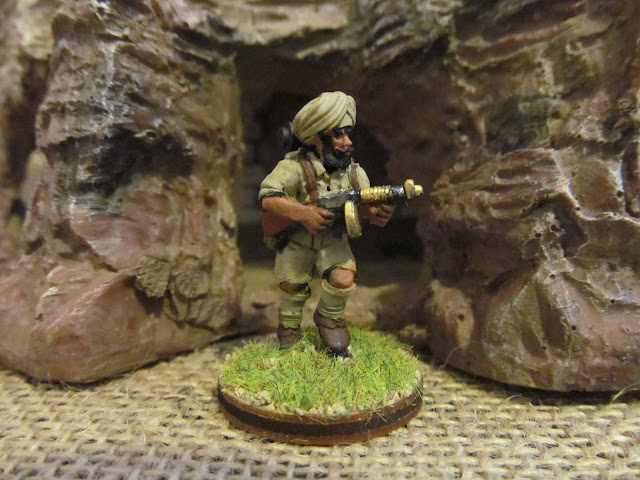 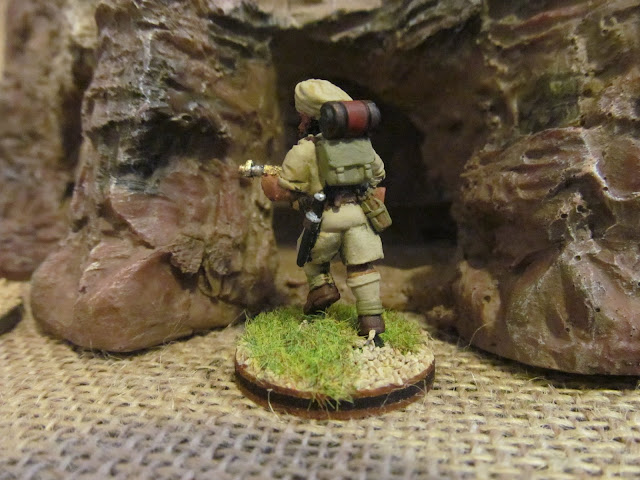 Orders have been issued as rumors of the rise of the Thugs has reached the highest levels of the Raj and Colonel Armstrong is eager to show the value of the 14th Sikh SSAC.
Posted by Neil at 12:49 PM