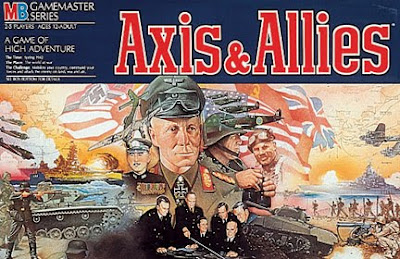 I have the first edition of the classic board game, Axis & Allies originally published by Milton Bradley in 1984. It has been revised and updated several times and is currently published by Avalon Hill. Up to five players can participate representing the USSR, Germany, Great Britain, Japan and the United States. The game portrays World War II at the strategic level and the map is divided into sections that resemble Risk. Each area of the map has a value (industrial units) that help the war effort. The players through economic development can purchase infantry, tanks, fighter planes, bombers, transport ships, battleships, aircraft carriers, submarines, air defense and factories with their industrial units. In the later editions there are additional forces. Players can also through research develop rockets, heavy bombers, jet aircraft, etc. The Allies can win by capturing the 2 enemy capitals; the Axis can win a military victory if they capture 2 of the 3 enemy capitals or an economic victory if their combined production is 84 or higher at the end of a turn.

USSR builds infantry and tanks and makes no moves.

Germany overruns French West Africa and invades and captures the Anglo-Egypt Sudan. In addition they launch a massive thrust at Karelia SSR and force the Soviets out. At sea, the U-boats sink a British transport but lose two U-boats in the North Atlantic to the Royal Navy. 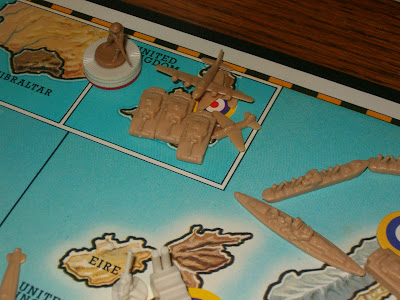 tempts a long range strategic bombing mission against Eastern European production but is shot out of the sky. British forces mass for a counterattack in North Africa.

Japan returns to Hawaii and destroys a submarine and aircraft carrier. The Imperial Army launches an offensive into and captures China.

The US tries to bomb North Africa but l 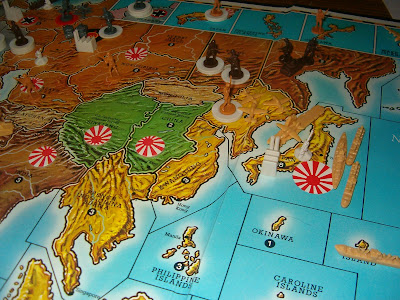 oses its bomber to German forces.

A good start for the Axis and a slow start for the Allies. The inactivity of the Soviet Juggernaut was surprising; usually in this game (as in real life) the Soviet forces cause the eventual destruction of the German Army. The Axis forces have to move fast to win this game, especially with the economic might of the US looming over the horizon.

The USSR launches a massive counterattack into Karelia SSR and the German's barely hold on with massive losses.

Germany continues to run rampant in Africa seizing French Equatorial Africa adn the Belgian Congo. The anticipated offensive to grab Moscow ends in disaster as the German Army is decimated with only the Luftwaffe staving off total defeat in the east. In the Mediterranean the British Fleet is sunk by the German Navy.

The UK attempts to relieve pressure in Asia by attacking Japanese occupied French Indochina from India; both sides fight to a bloody stalemate as both sides lose all of their forces. 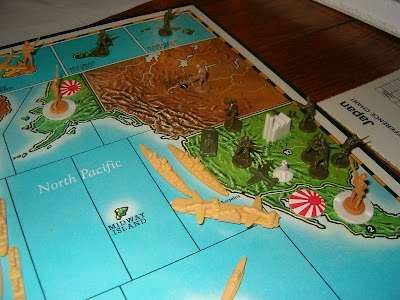 n the boldest move of the game (hey, it's my blog!) the Japanese Imperial Navy's invasion force bypasses Hawaii and invades Mexico instead. That's right - Mexico. The Americans are thrown off guard as a smaller force invades and grabs Alaska while the Imperial Navy sinks what is left of the US Pacific Fleet off the coast of California. The third prong of the Japanese juggernaut completes the conquest of China by destroying the Chinese-American forces in Sinkiang.

The United States strikes back with air attacks against the Imperial Navy sinking a submarine and a transport that was inroute to invade Hawaii. A US submarine attempts to penetrate the Japanese home waters but is sunk in the attempt. Another American sub tries to attack the German Navy in the Med and also falls to a watery grave.

Another good turn for the Axis, especially with the Japanese moves. But . . . the UK is making the British Isles into a massive supply base and the Americans and Soviets are building up their forces.

The USSR launches another attack into Karalia SSR and even though they take heavy losses, they start to wear down German strength. The Germans hold on again, barely.

In a two prong attack with massive air support, the German's smash through the Red Army and capture Moscow! The Afrika Korps continues their success by capturing the Union of South Africa and Kenya Rhodesia. With control of the Med, German marines land in Syria-Iraq. 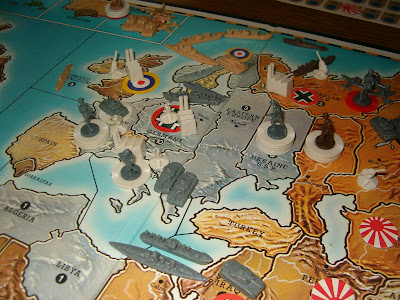 The UK launches a new front by invading and taking Norway.

Japan blitzes through India and Persia and takes advantage of the lack of Soviet Forces in Asia and grabs Kazakh SSR and Novosibirsk.

The US crosses the Rio Grande and retakes Mexico and masses its forces to retake Alaska. After placing his forces, the German and Japanese Commanders give each other a high-five as the game ends!

Well that was the quickest game of Axis and Allies we ever played. The USA and the UK were unable to react to the Axis moves while the USSR was basically left stranded. With the game ending quickly, the greater economic potential of the Allies never came into play as the Axis picked up extra industrial output by taking Africa and most of Asia. 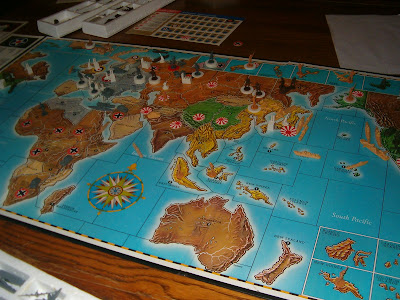