The crew of the exploration ship Znutar just wanted to cruise around the Galaxy, discovering strange new worlds and playing pool. But then their ship was invaded by the Awful Green Things . . . and suddenly they were fighting for their lives! 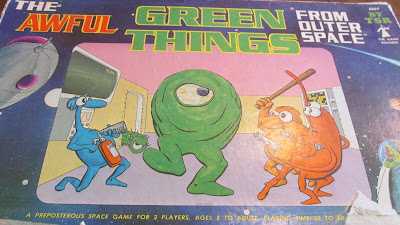 In this wacky two-player game, one player controls the Awful Green Things. They grow and multiply every turn – especially if they can gobble up a crew member! The other player commands the crew, frantically trying weapon after weapon (pool sticks, fire extinguishers, cans of Zgwortz) to find something that kills the monsters. 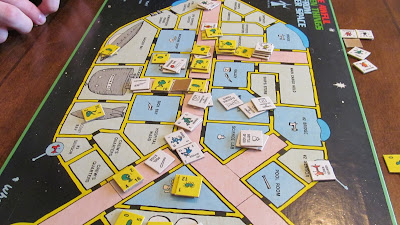 The great starship the Znutar.

The crew player places the crew members in their respective rooms. Most crew members have several rooms to choose from, but must be placed initially in one of these rooms (rather than in an arbitrary starting location). For example, Captain Yid can start in either of the two bridges. Weapons are also placed by the crew player in the appropriate pre-defined locations. 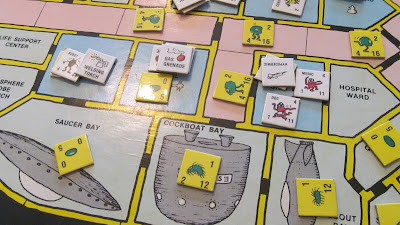 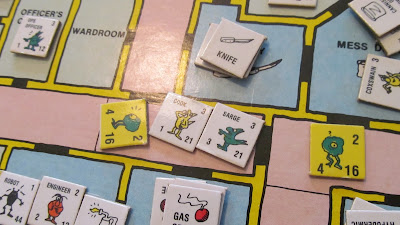 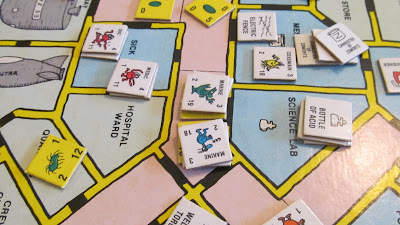 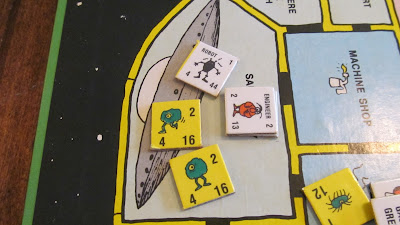 The Awful Green Things from Outer Space do not like the Robot.  He goes through them like shredded lettuce.

This is still one of my all time favorite games.  Recently I was the The Awful Green Things from Outer Space and Honorable Son #5 (The Lifeguard) was the valiant crew of the Znutar. Though Honorable Son# 5, after much laughter and good times, lost control of the ship, he was successfully able to abandon ship with what was left of his crew and return home with a warning about the Awful Green Things from Outer Space.

This classic game by Tom Wham first appeared in Dragon Magazine in 1980, and has been a fan favorite ever since! There is a new edition that includes Tom's "Outside the Znutar" rules and counters, for going out the airlocks and fighting on the surface of the ship, and upgraded components: a mounted gameboard, heavy die-cut counters, and a full-color rulebook.