Stellar Conquest was the first hex based board game my parents gave me; in fact, to show my age a bit it was the first edition published in 1974 from Metagaming Concepts. I instantly feel in love with the game with the combination of exploration, technological research, expanding colonies and the inevitable interstellar war involving up to 4 players. 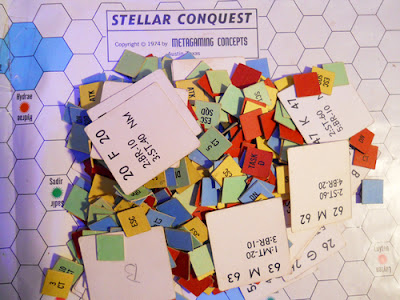 The original game; it wasn't pretty but it is oh so much fun!

Somewhere over the years I lost the original version but purchased the republished edition by Avalon Hill sometime in the mid-eighties.  The Avalon Hill version is the same except they changed the classes of the warships to take advantage of Star Wars.  I'm sorry, I still can't call the big ships Death Stars; they will always be the Dreadnought class of warships to me. And here we are in 2017 and I still play the game with my Honorable Sons. 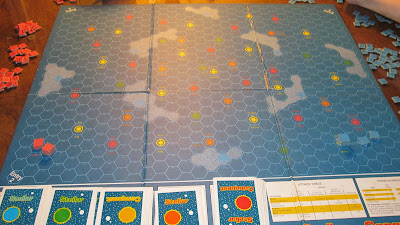 The current version, showing some wear and tear as the red and blue fleets have started to explore and colonize.

As you have already guessed by the pictures, the board is a hex grid map, with some hexes containing stars of varying colors. Stars in a hex may have planets that are suitable for a planet colonization which is determined randomly by drawing a card of the star color. 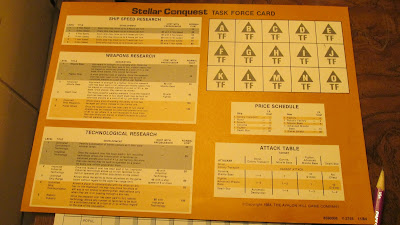 Handy reference chart for each player also helps keep track of your Task Forces when it is time to put the whammy on the other players.

At the beginning of a game, each player starts in an opposite corner of the board, each with a number of markers that represent ships of various types. For the first four turns the corner square counts as a populated planet. In addition, all ships may move only two spaces, but it is possible to purchase movement upgrades that improve the rate of travel speed. 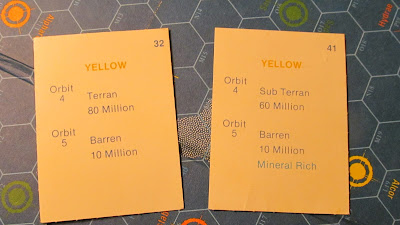 Two Yellow Star cards.
Units must follow the quickest path to a named destination, and their destination can be changed only when the route causes the unit to stop on a star hex. The distance that ships of any type may travel will not precede more than eight hexes away from a populated planet that is owned by the same player; this limitation can be rescinded by research. 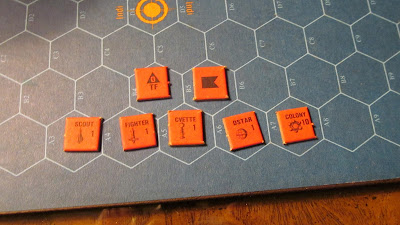 Research points can be spent on warships, speed, missile basis, industrial capacity and weapons research.  Every four turns a "production phase" occurs in which planetary populations increase by one-fifth their current population number. Any player may move population units into Colony Transports as they expand through the stars and inhabit other planets.  What is great about the game is "hidden" units as the tiles are not turned over unless opposing players are in the same star hex (no battles in deep space - only in a solar system!).  Is that single tile heading toward your planet squadrons of capital ships and escorts or only one scout ship? 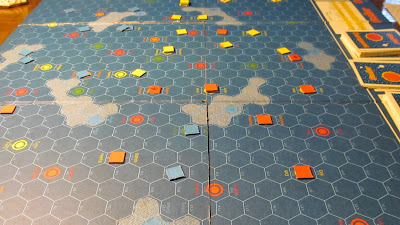 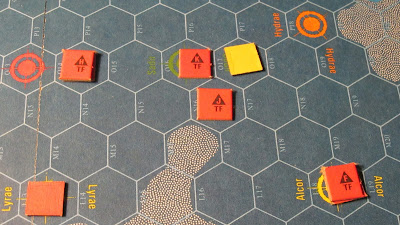 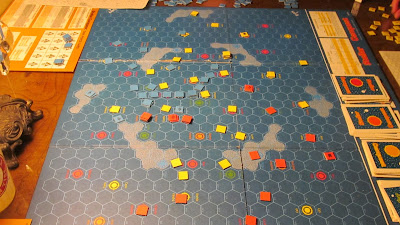 With three interstellar empires in our latest game there was a lot of wheeling and dealing as each of us made treaties, ultimatums and eventually all out attacks! 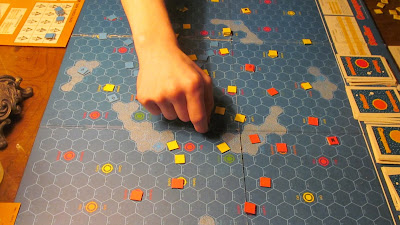 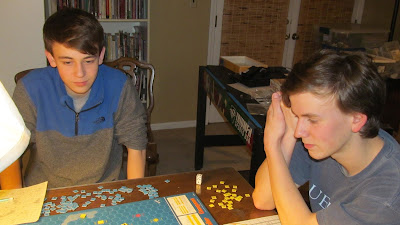 Honorable Son #5 (The Lifeguard) commanded the Blue Meanies while Honorable Son #4 (The best 18th Century General I have ever fought against) led the Yellow Horde. 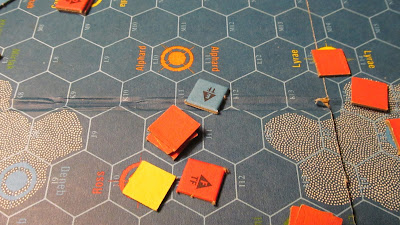 The Red Forces led by me help rush to take advantage of losses on both sides. 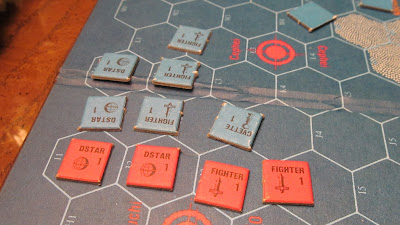 Combat is abstract but quick and bloody.

After "40 years" whichever side has the most Terrain type and Sub-Terrain type planets is the winner.  The biggest and baddest fleet doesn't hurt either.
Posted by Neil at 5:27 PM