IHMN: How The War of the Witches Came About, Part 2

On the 20th of May, 2013, In Her Majesty's Name was published by Osprey Games.  I had previously picked up a copy of Osprey's Dux Bellorum, and being a fan of the Osprey format, I purchased an electronic version of In Her Majesty's Name since I was traveling on business and it would give me a chance to read the rules. 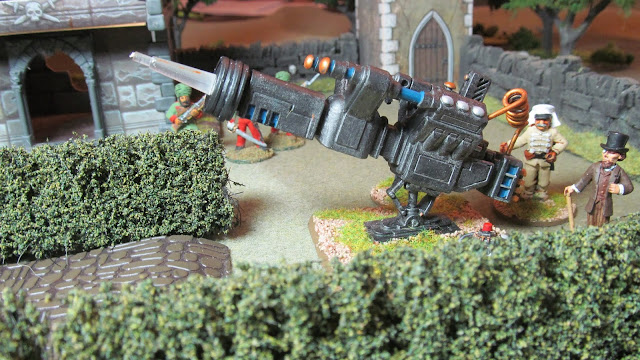 I was hooked and it did not take me long to by the print version, find the website, etc.  The question for me, as a low cost wargamer, where to get the figures.  The figure box sets by North Star are beautiful, but at the time, I did not want to spend the money on established companies yet as I had some ideas of my own.  Hanging around the hobby room was a menagerie of figures I had collected mainly because I liked them - they were not for any particular game. 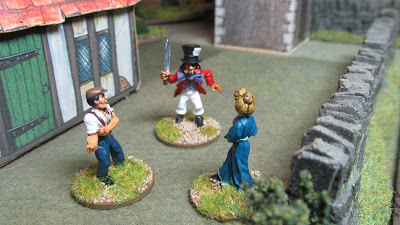 Some of the figures I had left lying around, 2 from Space: 1889 and the Mad Hatter from Wargames Foundry.

I still had some leftover Ral Partha figures from Space:1889 and some African Explorers (loved the figure that looked like Teddy Roosevelt), Sherlock Holmes and Dr. Watson from Wargames Foundry and the odd colonial figure hanging out. 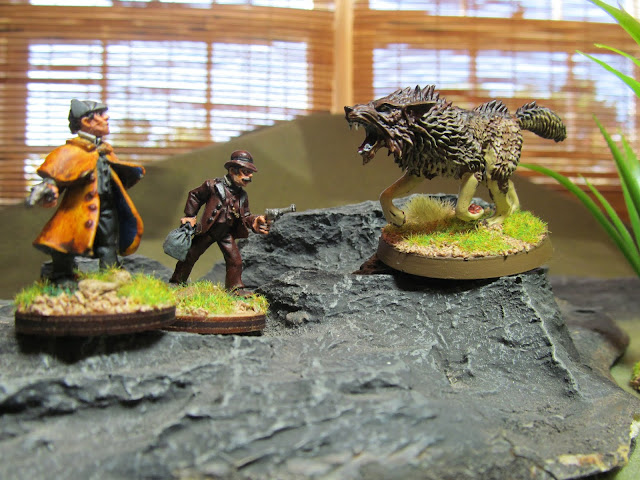 Holmes and Watson from The Hound of the Baskervilles.

So we had some figures that we could use as "good guys" without any expense, but what about the badguys?  Honorable Son #5 (The Skirmisher) suggested, "why don't you fight a sub-human species in Africa?  We could use the Lord of the Ring figures."  And thus the Witch King of Sokur was born on June 10th, 2015.  We did a test game "The Adventure of the Jewel of Chance" to work out the company lists and then we were all ready to go at it. 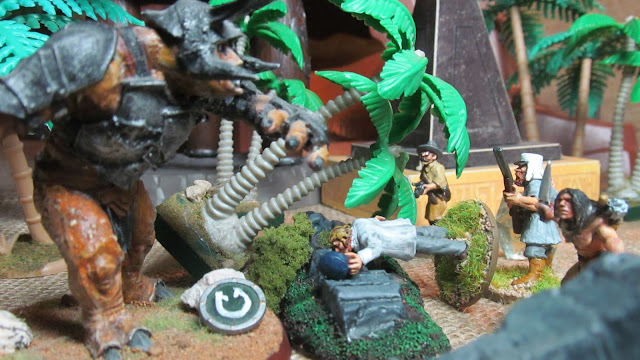 Picture from play test and the original caption: The creature is faster than at first thought and knocks a tree down injury Professor Nightingale!  And what is that new sound coming from behind the obelisk . . . 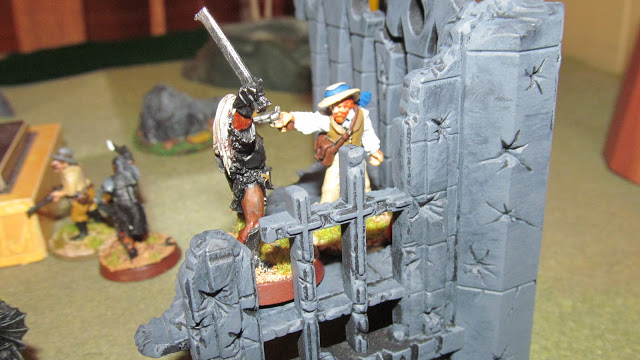 Go ahead, make my day.


It was from this first game that the personalities of the figures and a possible narrative for our games started.  Don't even get me started how evil Honorable Son #5 (The Skirmisher) made the Witch King. But it was fun watching the "personality of the figures" come out - the brilliant but inept Professor Nightengale (who accidentally killed two enemy Troglodytes), the brave Special Agent Thomas Sawyer, Teddy Roosevelt who had a TR quote ready every turn (never, never underestimate the use of a good quote!) and of course Tarzan, Lord of the Jungle. 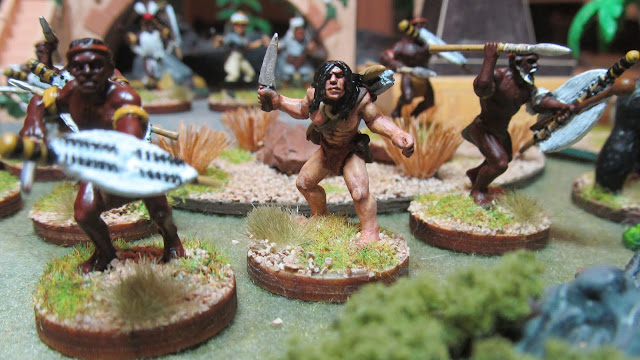 Over the years other bad guys and good guys were added - but the Witch King was always the big bad meanie on the block.  Soon there was General Ronglu and his Imperial Chinese Army, Professor Moriarty and blood thirsty cannibals. 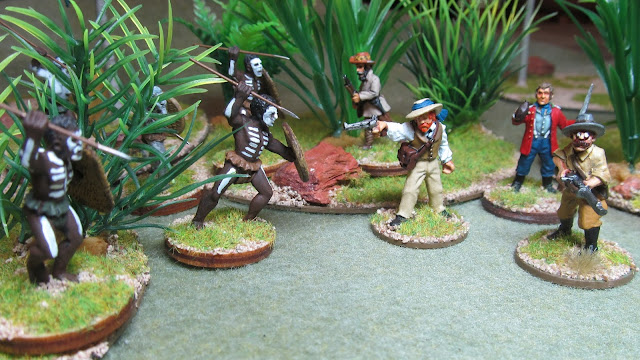 Most of the adventures take place either in deepest, darkest Africa, the lost city of Opar or near the town of North Piddle England. 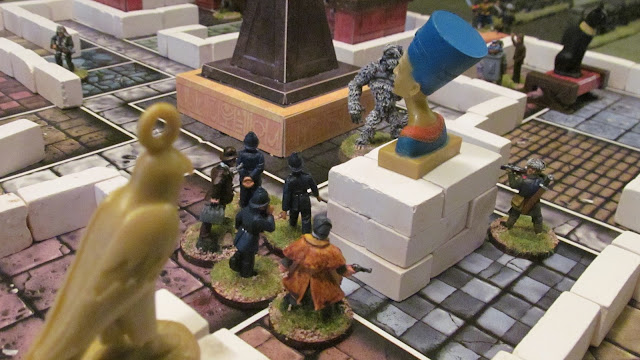 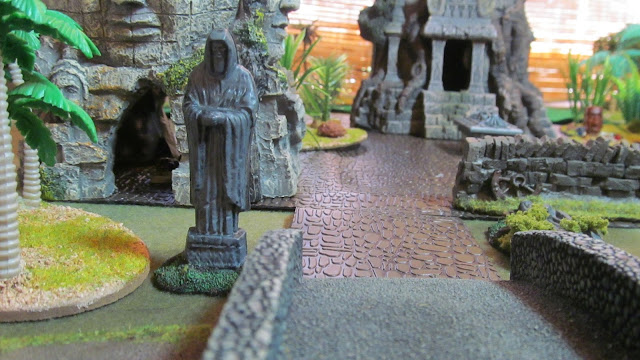 The Lost City of Opar

Many of my friends have joined in on the fun: Tom (The best Tie Fighter pilot in the Galaxy) always plays General Ronglu and his Imperial Chinese; Damon (The best fisherman in the State of Alabama) loves to play the British Army - especially Highlanders; Michael (Game Designer Extraordinaire) will play anyone and anything - and laugh about it.  In fact this trio is keeping track of who has the most blunders in a game and so far Tom has had more bayonets fall off, guns jam, explosions fail to go off than is humanly possible.  Or is it the Witch King? 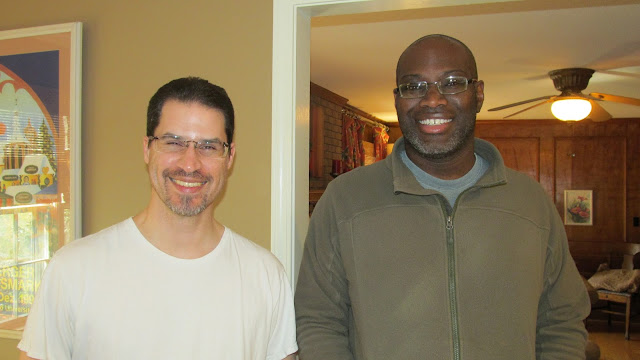 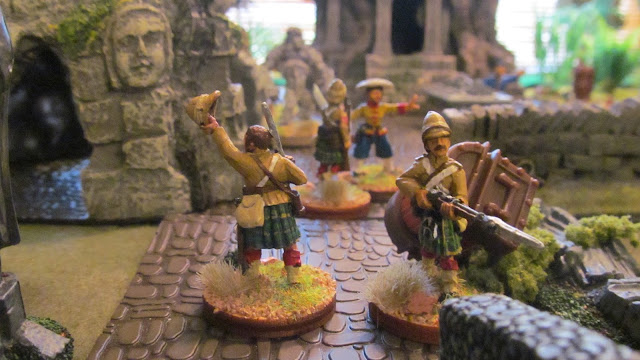 The Gordon Highlanders fight the Imperial Chinese in the Lost City of Opar.

Slowly a gaming narrative took place and always in the background was the Witch King, manipulating events for his own nefarious plans.  And then Sherlock Holmes figured it out - a war was coming and no one was ready for the evil that was to be unleashed.  And with the appearance of the Tesla Gates, Professor James Moriarty, The Wicked Witch of the West (WWW), Disintegration Rays, and indescribable creatures, Holmes knew that time was running out - and it was now 1895. 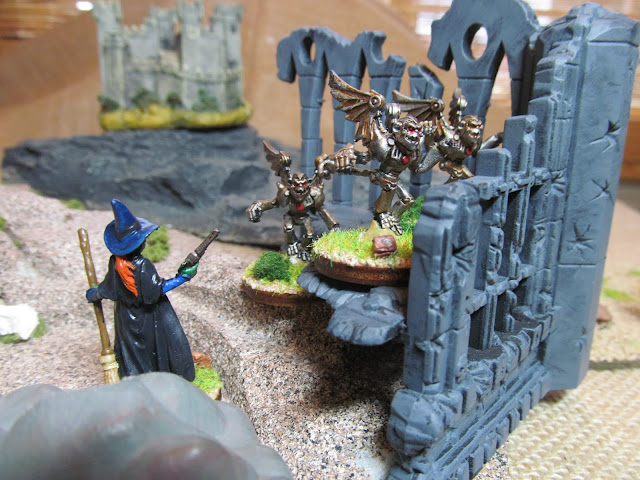 Take special care of those ruby slippers - I want those most of all. Now fly! Fly!"

Next: The Season Guide to what has happened so far in "The War of the Witches"
Posted by Neil at February 19, 2019