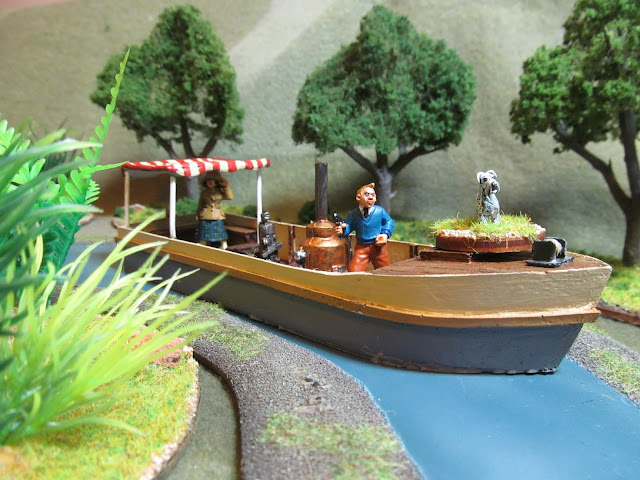 One of my go to sources for figures and hobby materials is BrigadeGames. They carry many ranges, have excellent customer service, and have many of their own ranges that are very reasonably priced for the wargamer on a budget. I recently purchased the Steam Launch that they produced and it is a 1st Class accessory for gaming - and easy to put together which I appreciate since I am not a great modeller! It is designed for 25mm to 28mm figures and costs $25.00 US dollars. I ordered on a Monday and it arrived at my residence on Thursday. 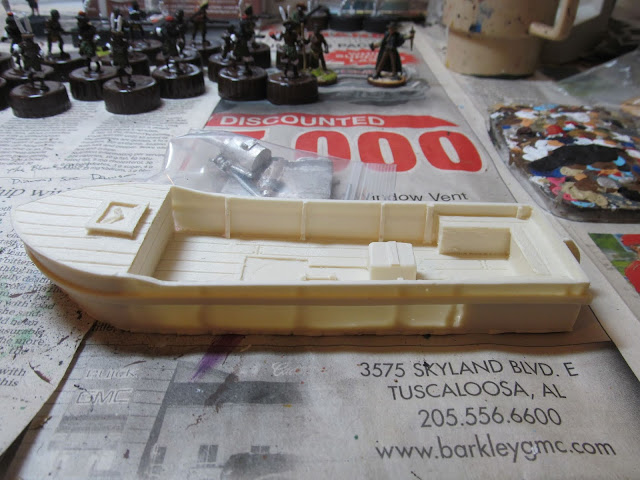 The resin hull and metal accessories.

The packing was excellent and the sculpting of the model is realistic and will easily pass for the African Queen and similar steam launches. There were some minor, very small vacuum holes in the resin hull but as far as I was concerned - who cares! It added a used, rugged look to the launch as this is a working ship with years behind it and not fresh off the factory floor. 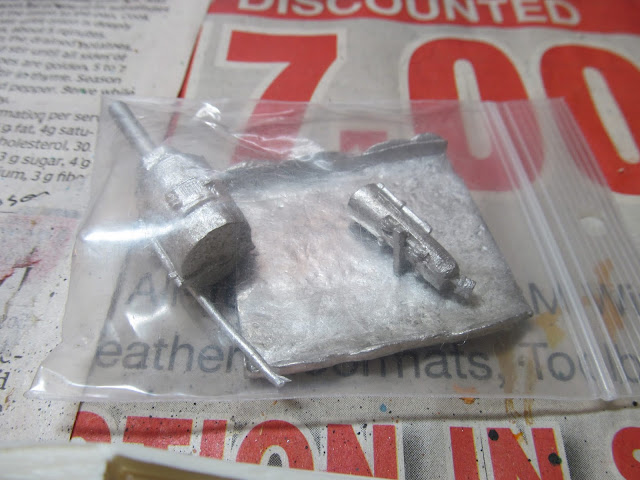 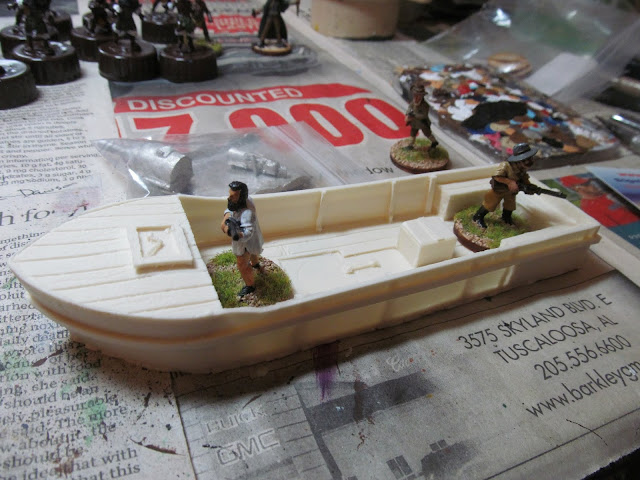 A couple 28mm figures mounted on 25mm bases to give an idea of scale. 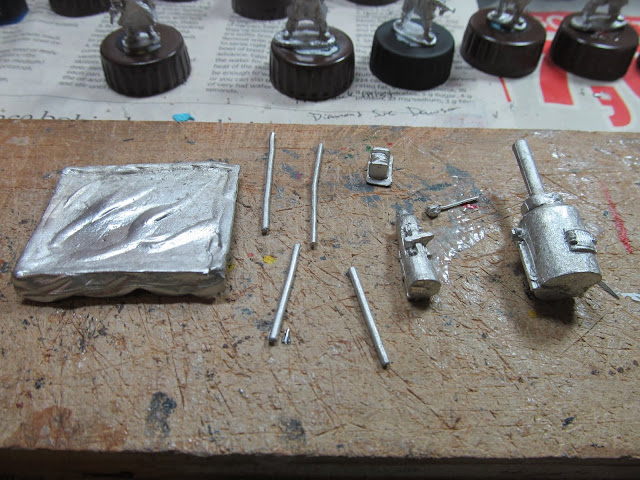 The canopy, poles for the canopy, a winch, parts for the steam engine and the stick thing (I really should look up what it is really called) for the rudder. 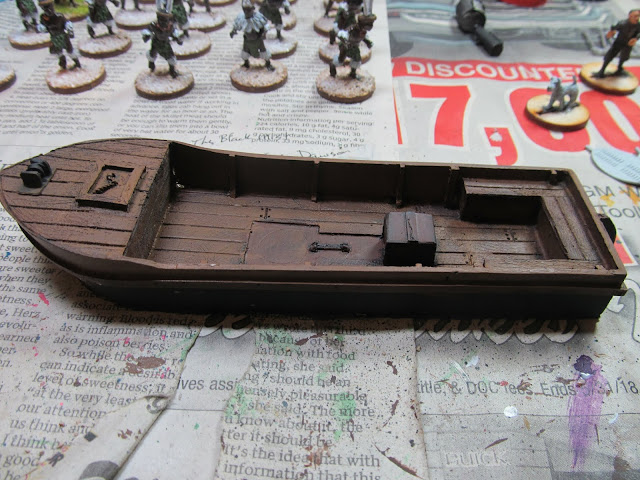 After priming the launch black, I painted the upper portion with Vallejo Dark Brown. All paints are Vallejo unless specifically mentioned. I wasn't concerned about neatness as any mistakes I could clean up and I wanted the steam launch to look used. 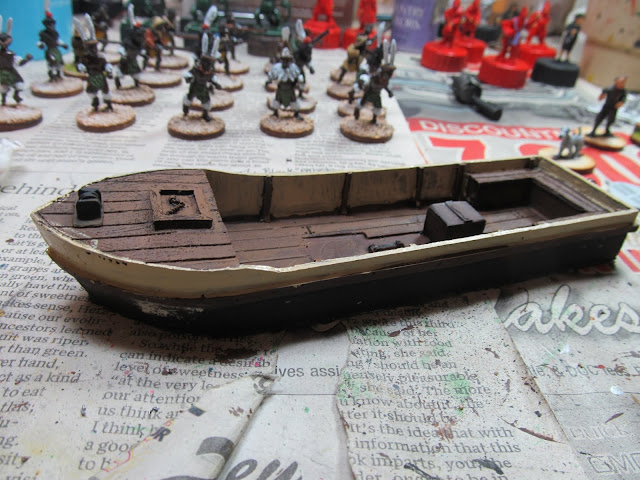 I then dry brushed the Dark Brown with Flat Earth, painted the upper half and inside with a first coat of Buff and then glued on the winch with super glue. 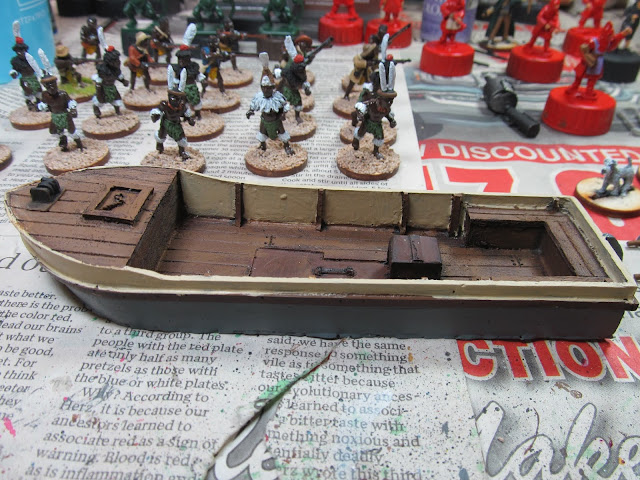 Second coat of Buff and some clean-up work. I then painted the lower half of the steam launch Natural Grey. 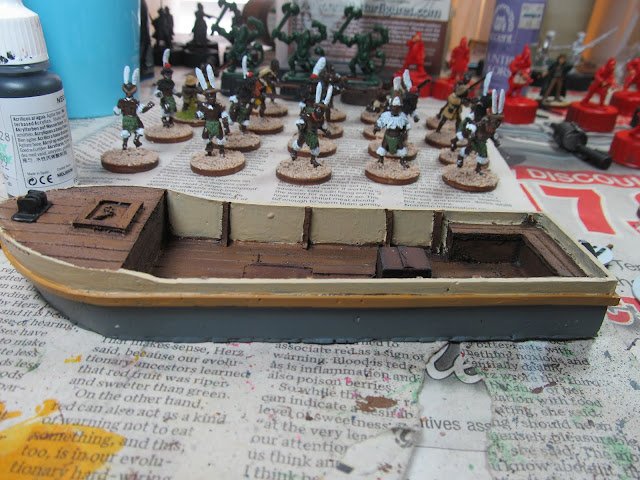 Okay, I was in the Army so I had to Google what the next part is called. So I painted the gunwale Green Ochre and ended up doing two coats. 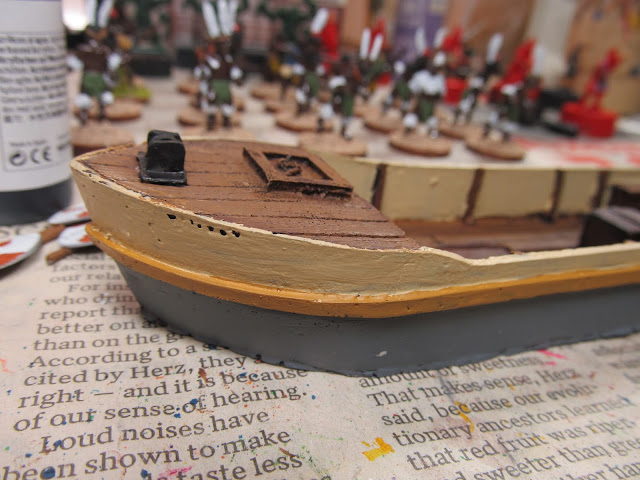 Some of the vacuum holes but I think it adds character. 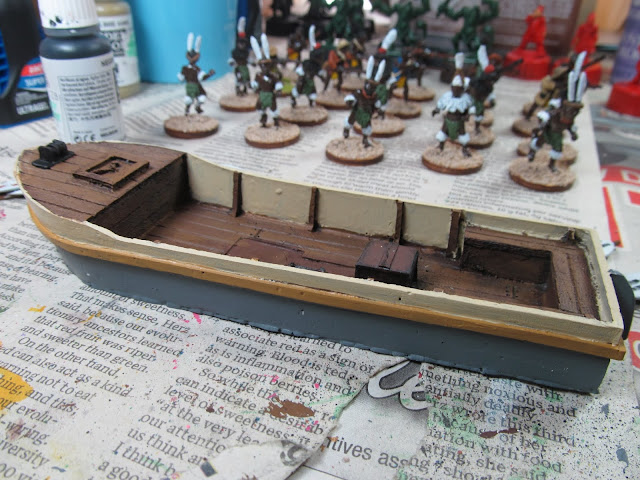 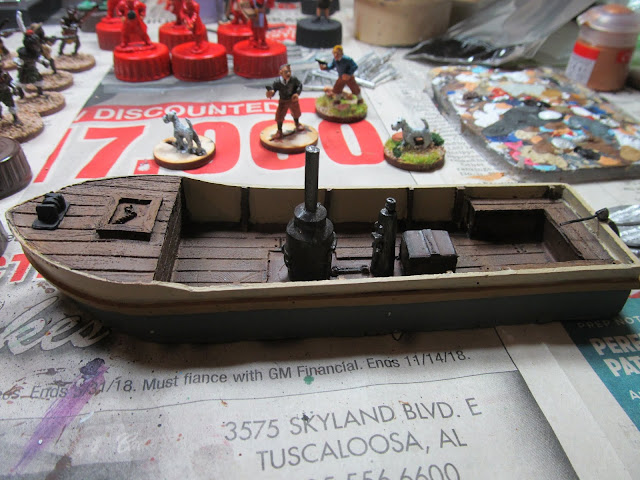 I also primed the metal engine parts black and then used GW's Ironbreaker as a base coat and then used Gun Metal, Natural Steel and Silver to add to the darker parts of the steam engine. 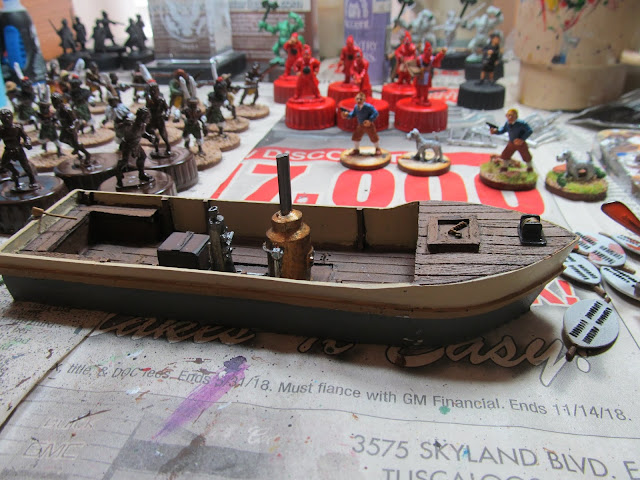 I painted the lower part with globs of GW's Shiny Gold to give it an oily appearance. 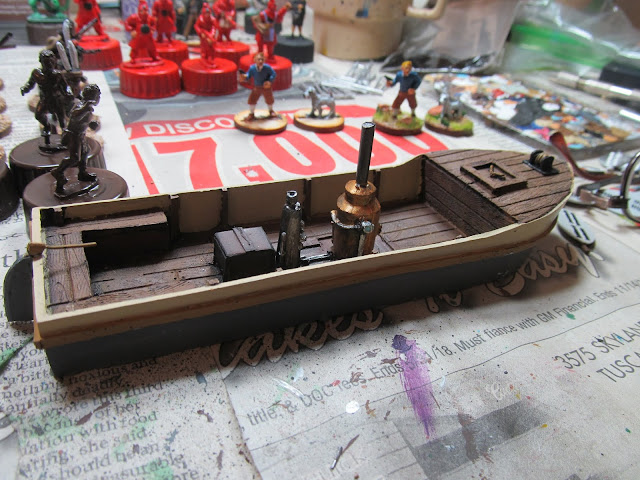 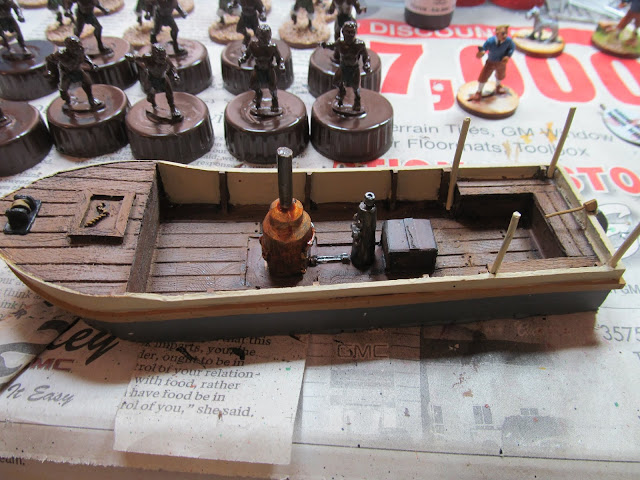 I failed to mention, but you probably figured it out, I tried to paint the steam launch to look as much as the African Queen as possible. The canopy poles were given two coats of Flat White. 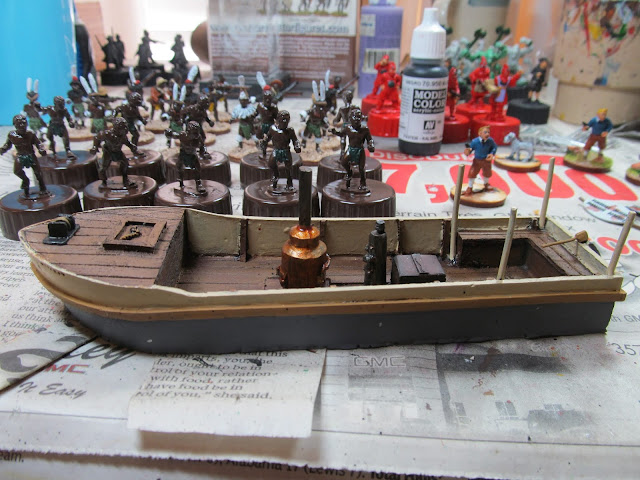 Ta Dah. Ready for the canopy. 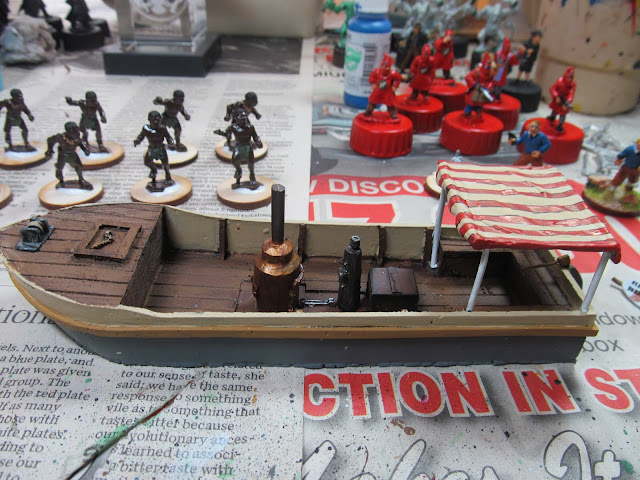 I primed the canopy white, painted it Buff, and then used Flat Black for the lines and then painted Flat Red over the black. 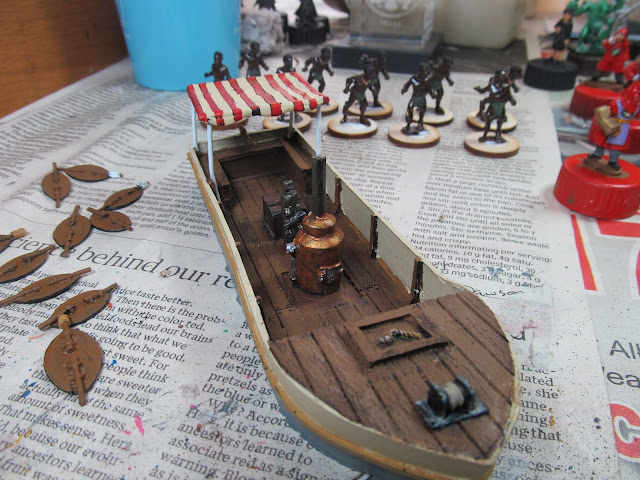 The canopy fit easily over the poles and was super-glued in place. With this picture you can see I missed a part of the red stripe on the canopy but in the first picture all the way at the top I had it fixed. 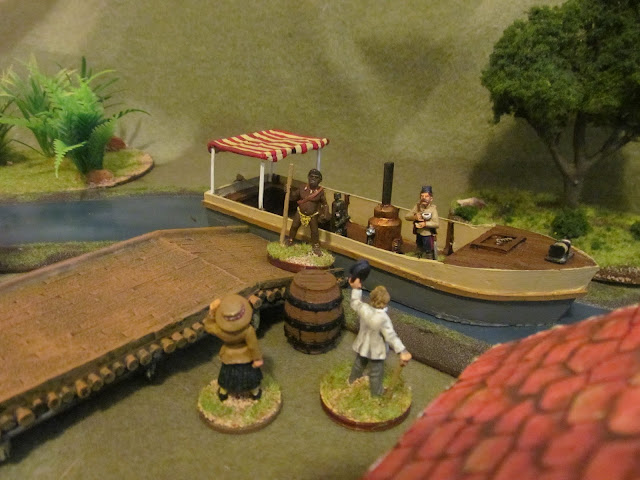 The steam launch is going to make a great addition to my late 19th and early 20th Century games. After I completed the boat, I discovered that most of my figures will not fit under the canopy. No problem!  Later on I am going to replace the poles with some brass rod probably a quarter inch taller and that should solve the problem. Another splendid product from BrigadeGames.
Posted by Neil at June 03, 2019