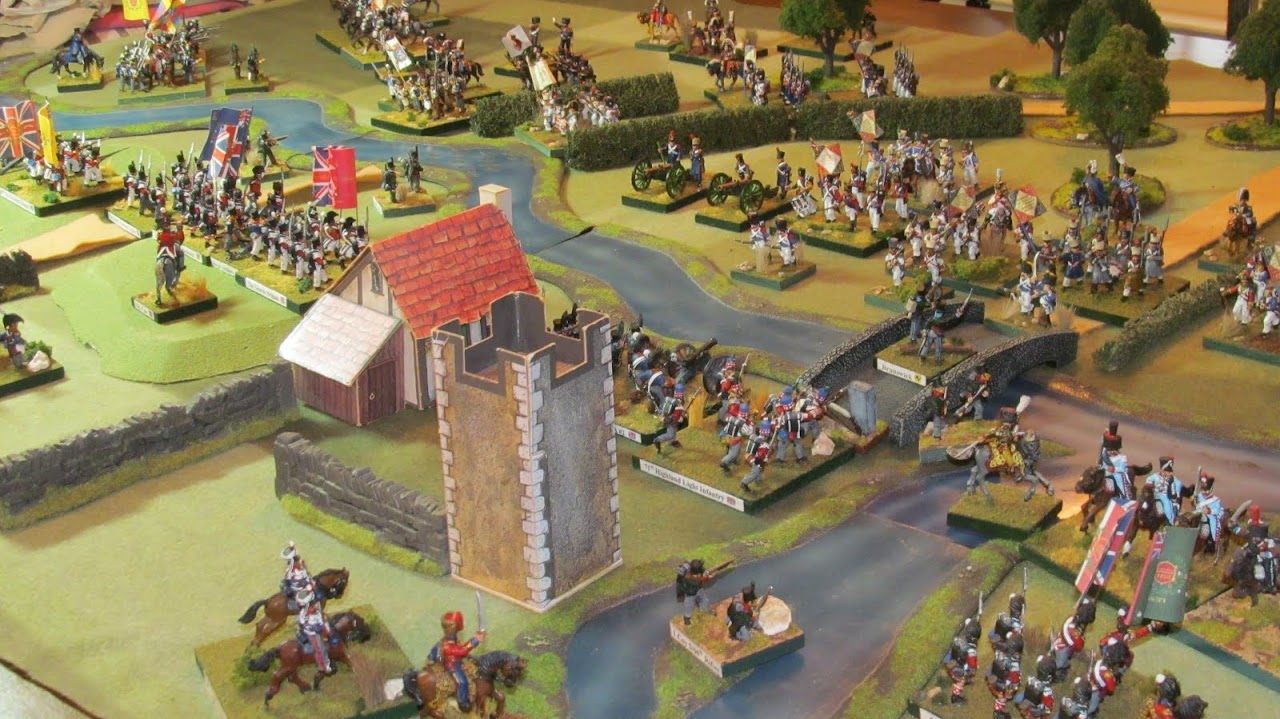 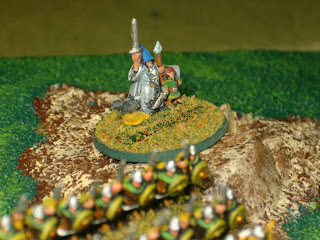 "In the hole in the ground lived a hobbit. Not a nasty, dirty, wet hole, filled with the ends of worms and an oozy smell, nor yet a dry, bare, sandy hole with nothing in it to sit down on or to eat: it was a hobbit-hole, and that means comfort." Thus starts the immortal The Hobbit, by J. R. R. Tolkien. The climax of the book is The Battle of Five Armies, with Goblins and Wargs on one side and the forces of Good led by Gandalf the Gray including the armies of Men, Wood Elves, Dwarves and Eagles.

Games Workshop has produced a game, The Battle of Five Armies with the usual Games Workshop method of hooking you into a hobby genre. The rules are best on their excellent Warmaster series. What is great about this boxed miniature game is that it comes with everything you need to recreate the battle: 10 mm sized armies of Dwarves, Wood Elves, Men, Goblins, Wargs, and the Giant Eagles. It also includes the major personalities: Gandalf and Bilbo Baggins, Thorin Oakenshield, Dane of the Iron Hills, The Wood Elf King (Thanduril), Bard of Laketown, The Goblin King and Beorn. What makes this box set even more desireable is the terrain that is included: The sides of Lonely Mountain, The Running River, Thorin's Gate and the ruins of the City of Dale. You can purchase additional units like the Spiders of Mirkwood Forest or the dragon Smaug.

The figures, mountain and ruins do not come painted, but believe or not, I find 10mm figures easy to paint. I don't focus on the individuals (except for personalities or command figures) but focus on painting it as a unit. The focus should be on the "biggest" colors of the unit and also on shields and flags. The river is hard cardboard.

The battle is one of the most play balanced of all time; after about 8 games, but sides have won 4 times. The game usually goes right to the end and will keep you on your toes. Will the goblins overrun the smaller forces? Or will Beorn and the Eagles arrive just in time? The game currently retails for $82.00; I got it on eBay for $50.00. 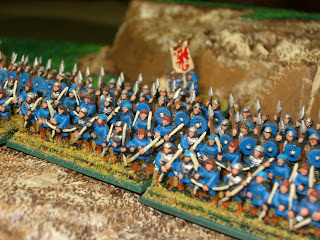 Bard and the men of Rivertown. This is the weakest army in the game - keep them on Lonely Mountain and protect their flanks! 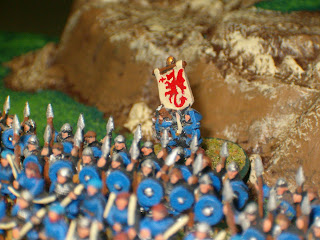 A close-up of Bard the Archer; I thought it would be a cool idea to put a dragon on his banner. 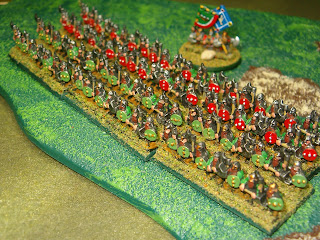 The Dwarven Host. These little guys are tough! Thier army is the same size as the men but is more heavily armored and did I mention they were tough? That's Dain who is their leader. 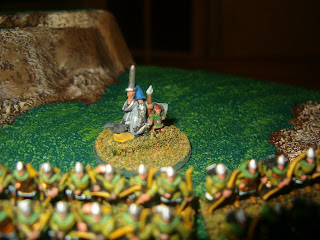 Gandalf the Grey and Bilbo. Gandalf is the overall commander for the Forces of Good; and has a few spells up his sleeve. 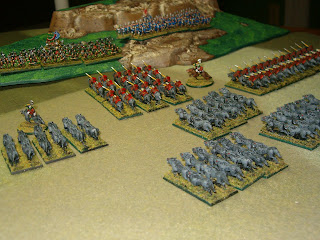 Goblin Wolf riders and Wargs attack the Dwarves and Men. 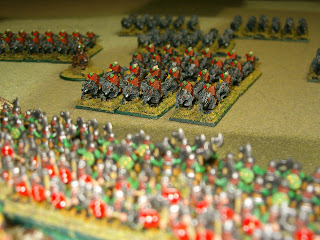 No love lost between the Goblins and Dwarves! 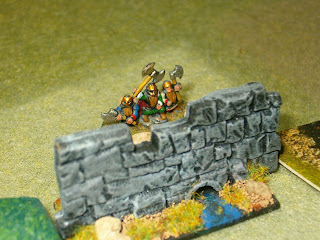 Thorin Oakenshield behine the improvised wall under Lonely Mountain. If you are playing the good guys, you want to get him in the fight as quickly as possible - adds alot of combat power to friendly units. 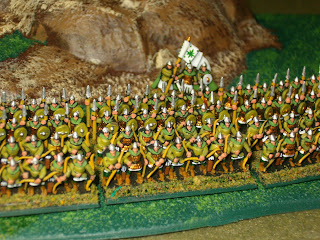 The Wood Elves. A large force with many archers. 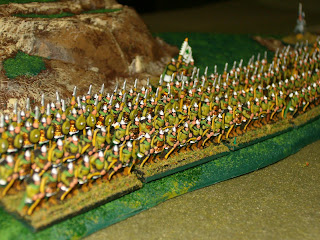 Elves spreadout on the other side of the battlefield. 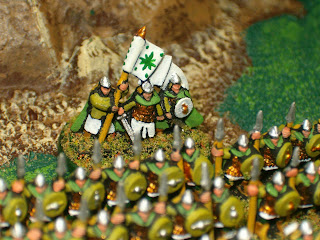 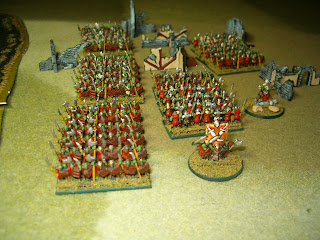 The Goblin King and goblins move through the ruins of Dale. 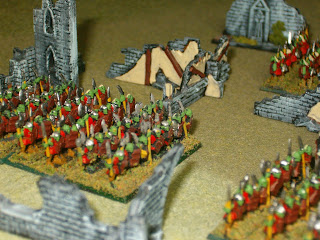 The ruins come with the game. Easy to assemble and paint. There is an excellent painting guide and terrain building tips in the usual GW style in the rule book. Say what you may about GW, but they know how to cover the entire aspect of the hobby. 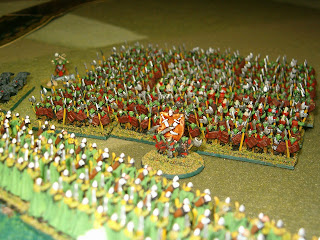 Goblins advance on the elves. 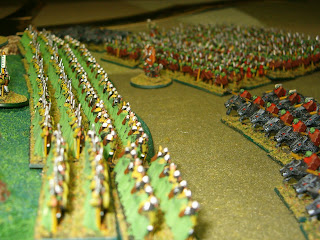 The Forces of Evil have lots! 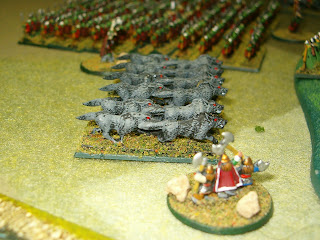 Thorin gets into the fight. 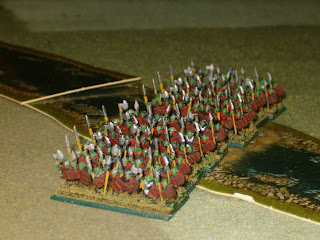 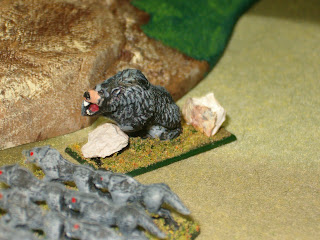 Beorn in his giant bear form. I honestly need to repaint him, I think he looks like a giant gopher. 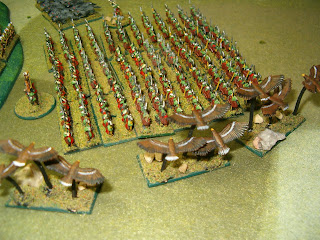