Merry Christmas to all!

With Friday a day off from work, I took a little time to work some more on the Erbprinz Regiment for my French Napoleonic forces.

I love flags and there are some great, commercially produced flags for the wargamer. But for me (and my budget) a great resource is the website Warflag that has free flags available for use. All I do is copy the image and save it to my computer, open up a word document, insert the image and then adjust it to the size I want. Click print and presto - instant flag. 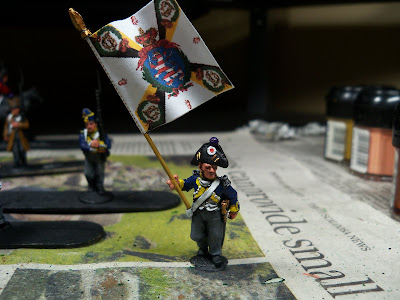 Above is the liebfahne (sovereign's flag) from the Warflag site for the Erbprinz Regiment; the standard bearer is a French officer from Wargames Foundry who has been painted for the Erbprinz regiment. The staff is a metal rod available from many hobby stores and manufacturers; I believe this one came with standard bearers I purchased from Front Rank miniatures (available in the United States from Triangle Miniatures). The finial on top is a spear point that came with a pack of thrusting spears from Old Glory Miniatures. The staff is painted with two coats of GW's Bubonic Brown and the finial was primed with black and then painted with Shiny Gold. 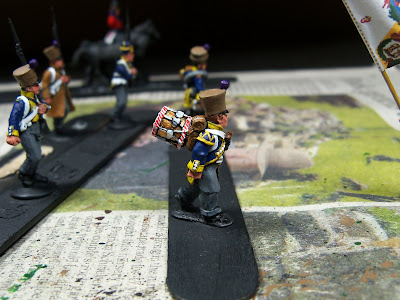 The drummer above is also a French Wargames Foundry figure converted for the Erbprinz Regiment. The uniform is conjectural; however, it is based on other drummers in German and French units of the period. I also used as a reference sketches copied during World War II by the German military artist Ludwig Scharf of soldiers from various contingents of the Confederation of the Rhine that served in the Peninsular War. Scharf had the opportunity in a chance meeting with a German military officer to copy from an old sketch book that was a family heirloom. The sketch book had old colored drawings of soldiers drawn from life while on campaign. Shcarf copied many, but not all, with numerous notes about colors of jackets, button loop details, etc. That night an allied bombing raid destroyed the hotel the German officer was staying in; neither he nor his sketchbook have been seen since. 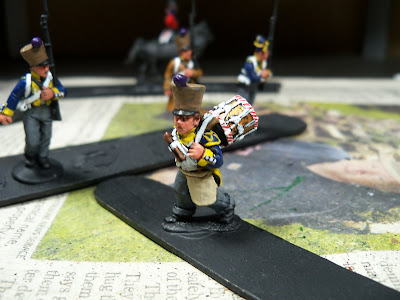 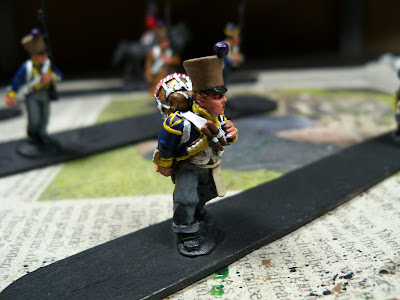