I've recently purchased some more Perry Miniatures for the Peninsular War with some handy birthday money (thanks Mom and Dad!). I picked up the box of French Plastic Infantry and also some metal Brunswickers to fight along side of the British. 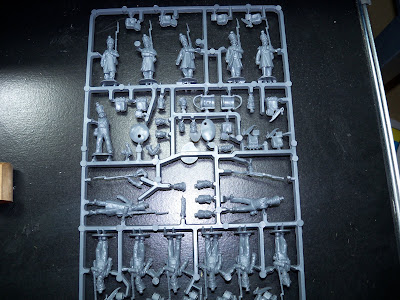 One of 3 sprues that come with the Perry Box; lots of options!
One of the nice things about many of the German French allies during the Napoleonic Wars for wargaming is that many adopted similarly styled uniforms as the French. For the Peninsular armies, I have decided to do General Leval's famous German division that served with the French. Level's division consisted of troops from the Duchy of Nassau, the Principality of Baden, Holland, Hesse-Darmstadt , various units from the Confederation of the Rhine and troops from Poland.

Based on unit returns, it looks like Leval's Division will have 4 Brigade stands. One brigade will be troops from the Duchy of Berg (not in the division historically, but hey, they are Germans and they are already painted!), the Gross und Erbprinz Regiment from Hesse-Darmstadt, the Anhalt battalion from the 5th Confederation of the Rhine Regiment and last but not least, the 4th Polish Infantry Regiment. 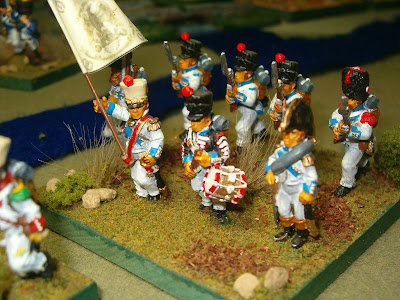 1st Regiment of the Grand Duchy of Berg

The first unit I'm going to paint will be the Gross and Erbprinz Regiment from Hesse-Darmstadt. Their uniform is close enough in this scale to the French infantry to use the Perry French plastics. The badge on the shakos (hats) are different so I'm using figures with covered shakos. Uniforms are dark blue with yellow facings. Since I've never painted this unit I'm doing a test figure first. 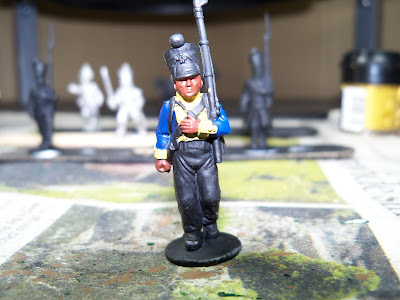 This is the test figure. For the yellow I'm using first a base of GW's Bubonic Brown (shown) and will then highlight it with Blazing Yellow. I hope to finish it this weekend. 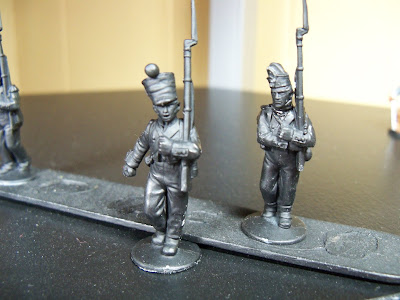 Some more of the future Hessian troops. The Perry box comes with a large variety of head options so I added one with the garrison hat.