IHMN: So you have a low tech Army? 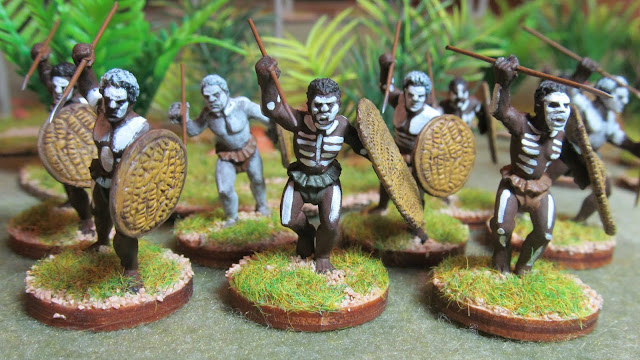 In Her Majesty's Name is one of the most versatile and innovative rules out there in miniature gaming land. Though designed for Victorian Sci-Fi it works equally well for purely historical skrimish scenarios of the late 19th or early 20th Century. 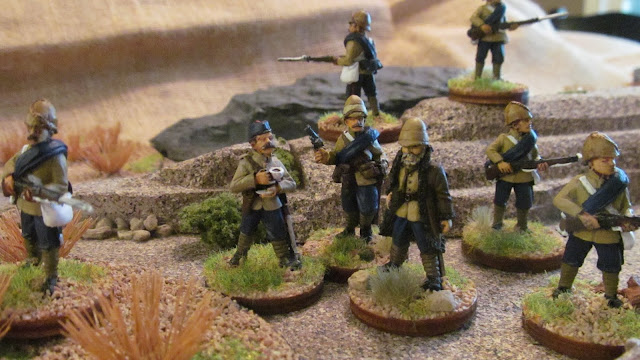 British Infantry company for a 2nd Afghan War scenario and not a Mystical Power in sight.

In Her Majesty's Name was published on May 20, 2013 and I was one of the gaming geeks that pre-ordered; not only the printed version but also the electronic version for my tablet.  After 5 years of gaming and devising my own companies for In Her Majesty's Name I wanted to pass on some lesson's learned especially in fielding what may appear to the casual observer a low tech army. I'm not going to comment on the Supplement Gothic yet as we have not played enough scenarios with it but . . . look out for those cursed weapons!

At first low tech companies look like they were going to be overwhelmed by Arc Rifles, Steam Fists, modern rifles and other scientific marvels of the late 19th Century.  But a low-tech army has some unique strategies that can frustrate the most high tech and well trained company the 19th century has to offer:

1. Numbers.  Generally with a low tech army (Natives, Dervishes, Swords and Shields, etc.) the points costs for your rank and file tend to be low.  Your advantage is Fighting and there is nothing like mobbing or outnumbering that 120 point figure with 4 of your own and taking him out.  In addition, if the super character is knocked down you gain a bonus of +2 on future attacks.  Also if he tries to disengage from a fight, it is -1 for each figure he is fighting. 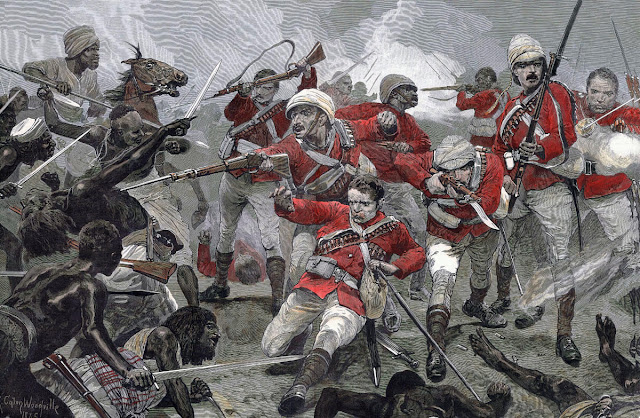 Mahdists breaking into the British square at the Battle of Abu Klea on 17th January 1885.

2. Run as much as you can.  There is nothing for me more frustrating than trying to take out these sword and speared armed warriors with disciplined firing when they are running.  By virture of them running (think Kipling's Fuzzy Wuzzy and they broke a British Square) the shooting penalty is -3; and if you moved more than 3" tack on another -4 to that die rule.  Volley fire can be effective to counter, but you only hit one figure and there are a gazillion more coming at you! 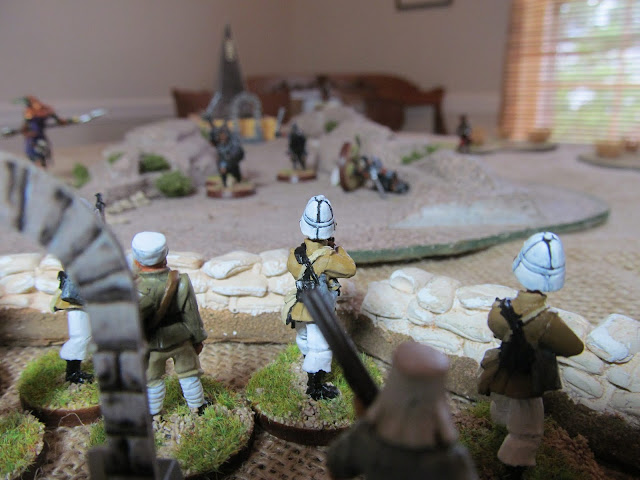 All of the figures were running and only one was killed; the rest made it to the barricade for hand to hand in the Fighting Phase. 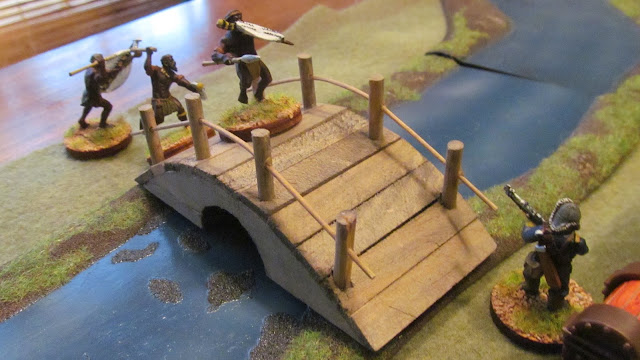 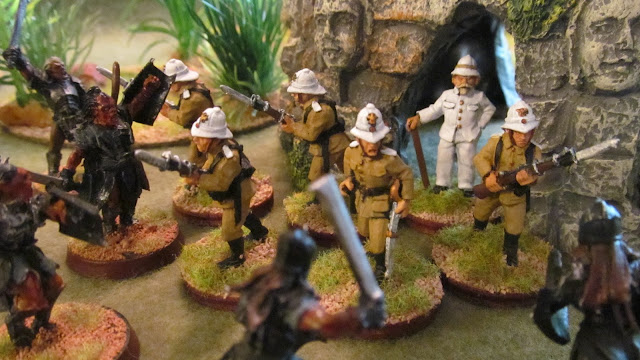 German Imperial Marines are desperately trying to hold on against overwhelming numbers.

4. Talents.  Depending on the amount of points agreed to in your game the following Talents are useful for low tech companies and/or key figures in your company: Beserker, Fanatic (personal favorite), Numb, Skirmisher, Stealthy, Terrifying, Meticulous Planning and Tough.  The leadership of your force should be at least a +2 Leader though I recommend a +3 and give them as a minimum the Inspirational talent. 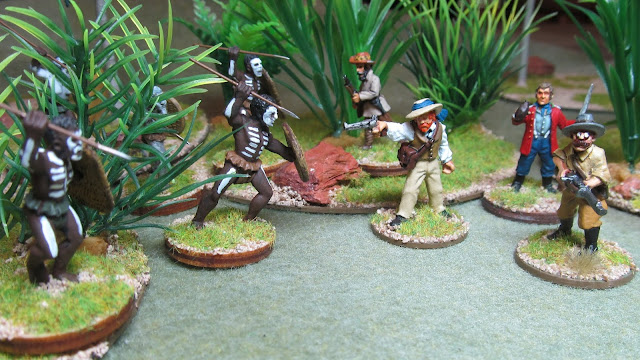 Running Shield armed natives with the Stealthy Talent are attempting to overwhelm the Explorer's Club. 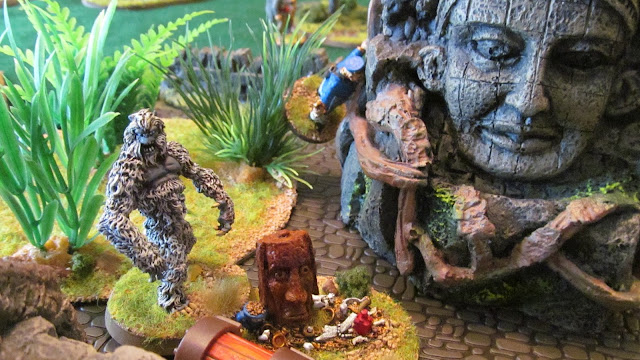 Terrifying and a Beserker.  Check.

5. Mystical Powers.  Whether they be a dread overlord, witch doctor or shaman, Mystical Powers can greatly enhance your low tech company.  The power that has frustrated our "modern" companies the most is Water Bullets which adds +2 to Pluck rolls against bullet hits until one of them is taken out of the game by a bullet.  Other useful Mystical Powers for low tech companies are Dragon Breath, Harden, Mesmerism, , Spitfire, Strengthen and True Grit. 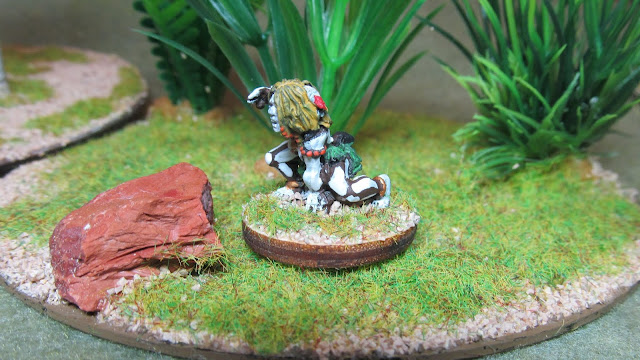 The Witch Doctor uses a Mystical Power against the Explorer's Club. 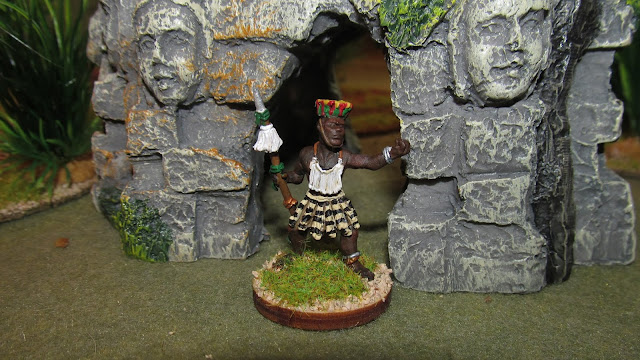 Did someone say they needed Water Bullets? 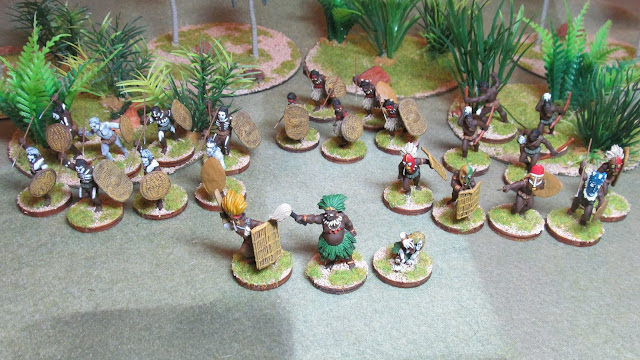 Have no fear!  A low tech Adventuring Company is here - boy are they ever!