I have decided that my second Irish Regiment for the English Civil Wars (also known as the Wars of the Three Kingdoms) will be Colonel Alexander MacDonnell's Regiment of Foot. When the regiment shipped to Scotland, the good Colonel stayed in Ireland as part of the war there and the regiment was led by Major John Laghtman (also spelled Laghtnan).  On the dining room table Alisdair "Big Al" MacColla has joined the regiment and will be personally leading the "Highland" charge in all of its gaelic glory. 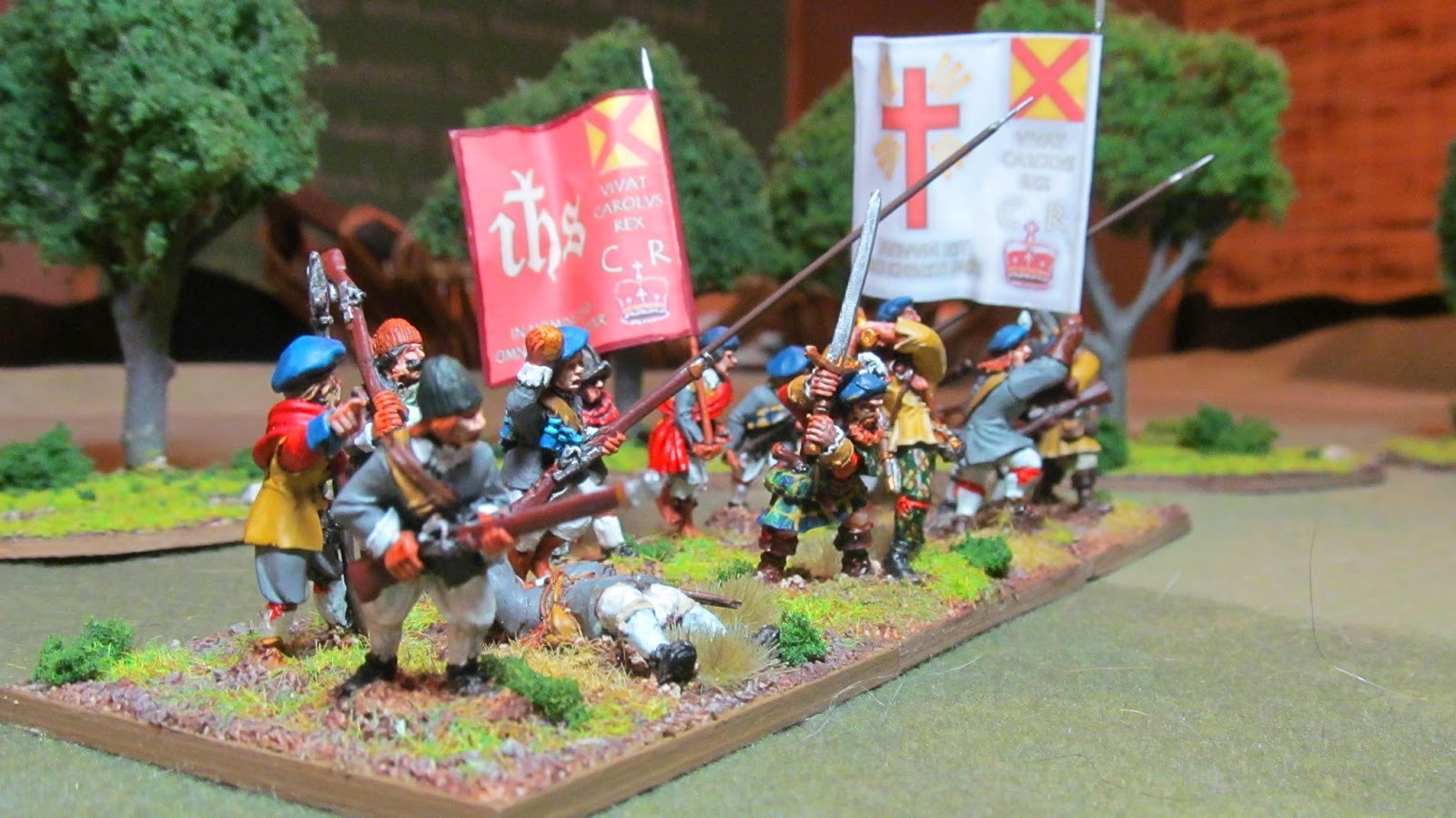 Since I did the first Warlord Games Irish regiment shooting, with the variety of figures that come in the boxed set I decided to do the second regiment charging with a few extra supplements from their English Civil War range. 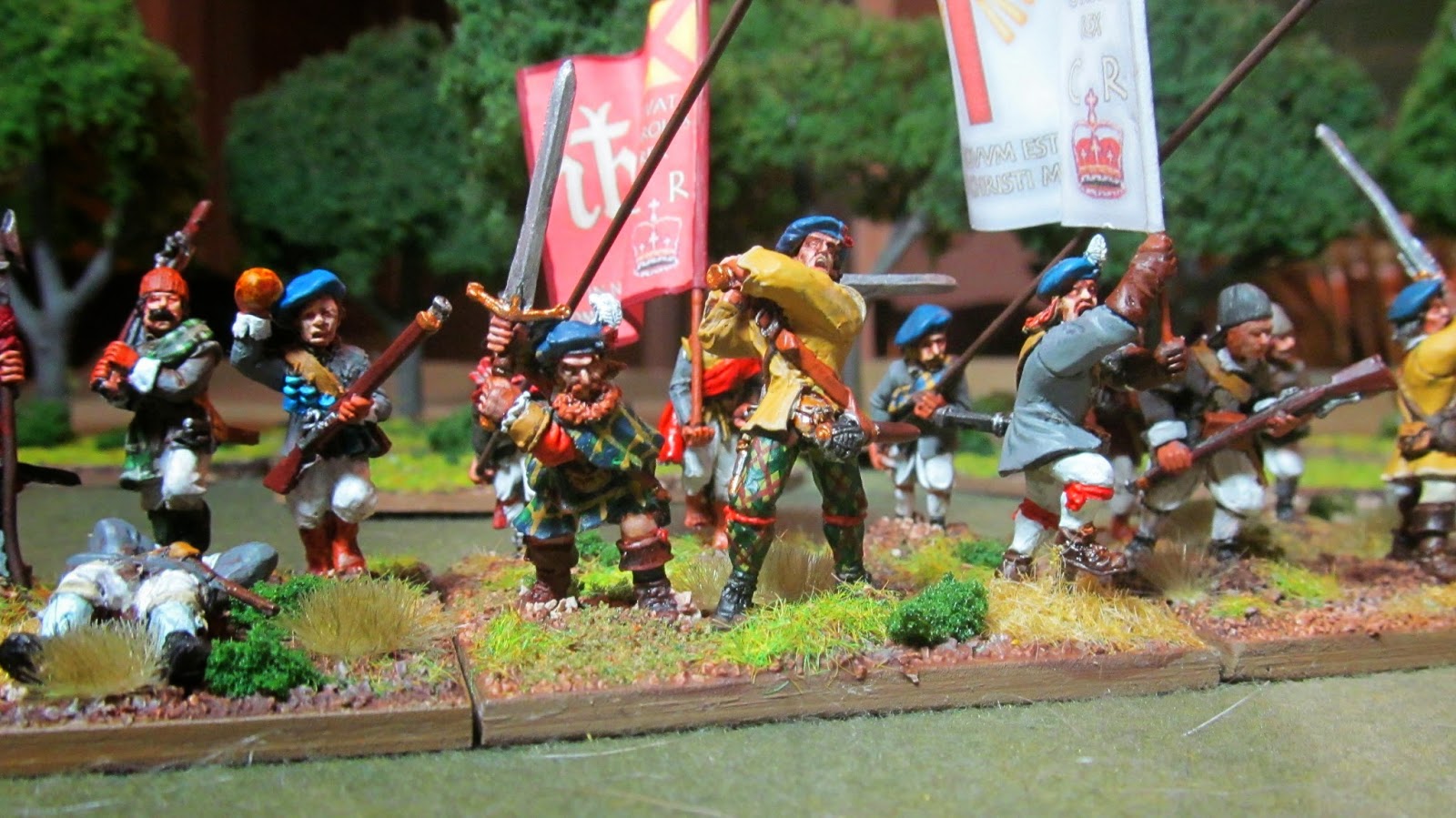 Added to the regiment is the leader of the Irish Brigade Alisdair "Jumbo Tron" MacConnel and two body guards from the wonderful blister pack from Warlord Games.  The body guard in the kilt is Dubhaltach "Dubya" MacPhee. 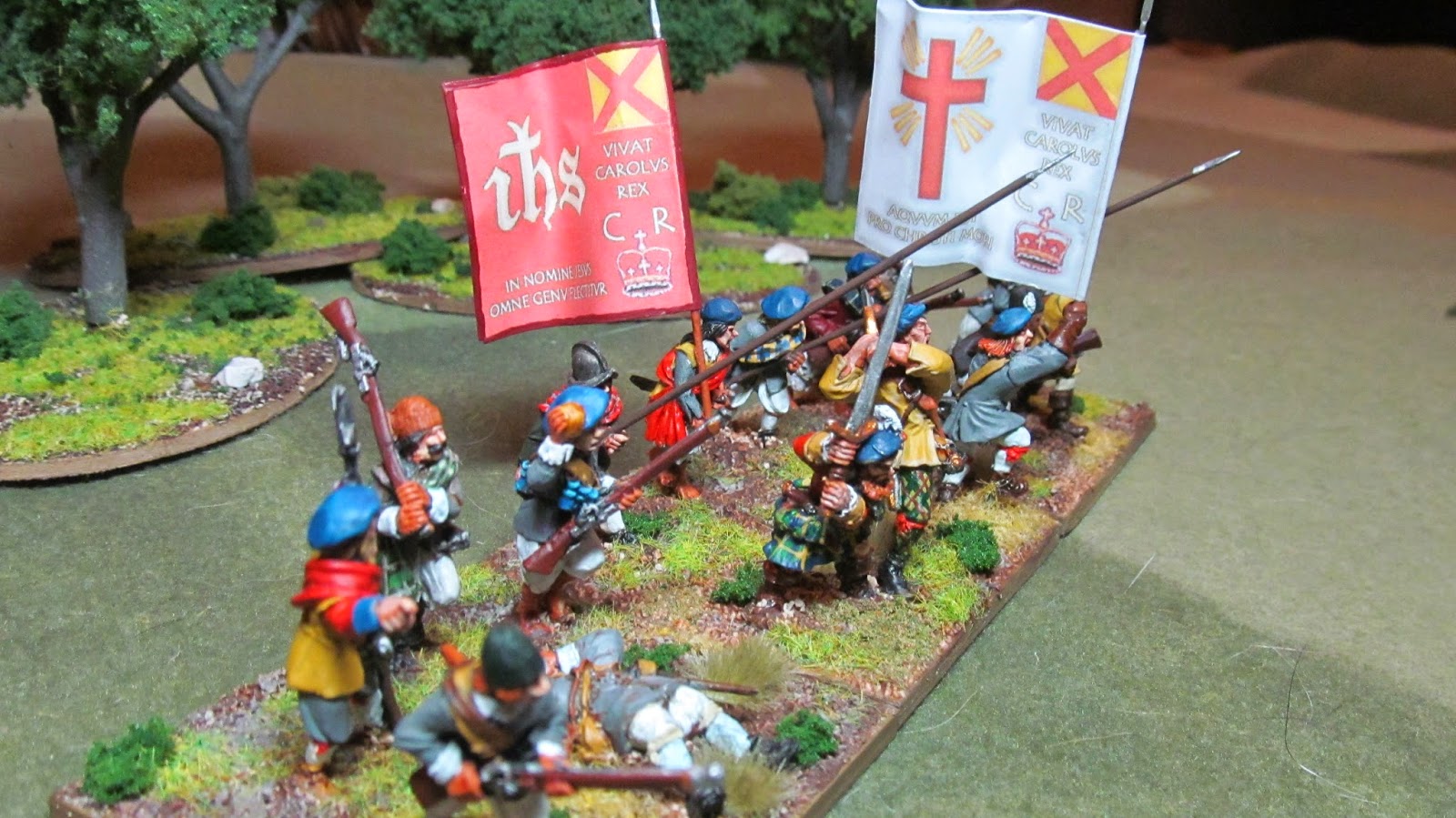 I would be remiss not to mention that the flags are from the fantastic blog Project Auldearn 1645 which are free to copy and use. 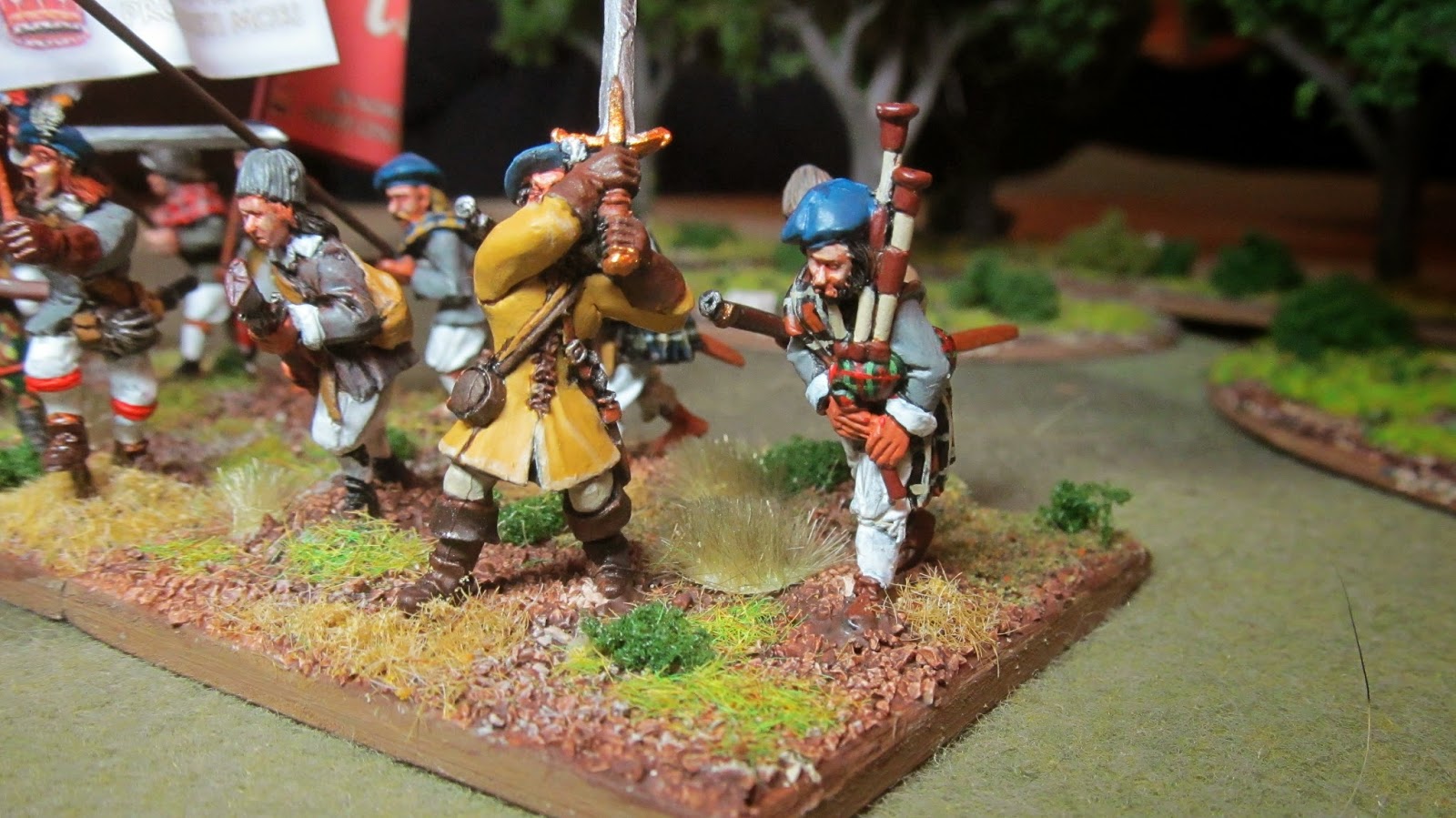 Here is Alisdair's other bodyguard Calum Mor MacInnes. Calum is looking very stylish in his buff leather coat and has no problem swinging that claymore next to the piper. The Irish Brigade piper came with the box set. 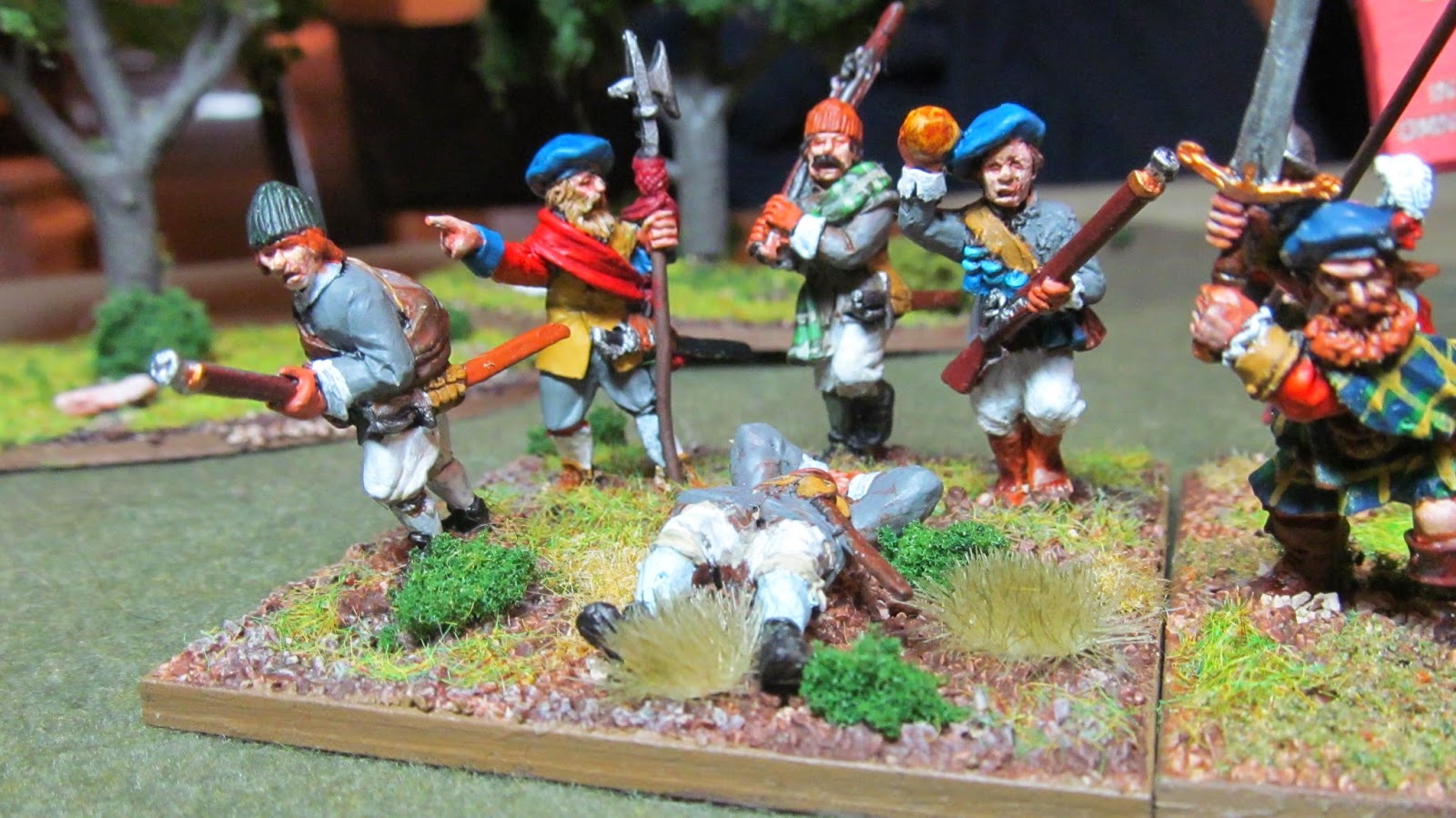 The Irish Brigade sergeant with partisan (the paritisan or pole axe was the symbol of his rank) also came with the boxed set. I should have taken a picture to see his whole face as he also has an eye patch. Casualty is from the Scottish casualty pack from Warlord Games. 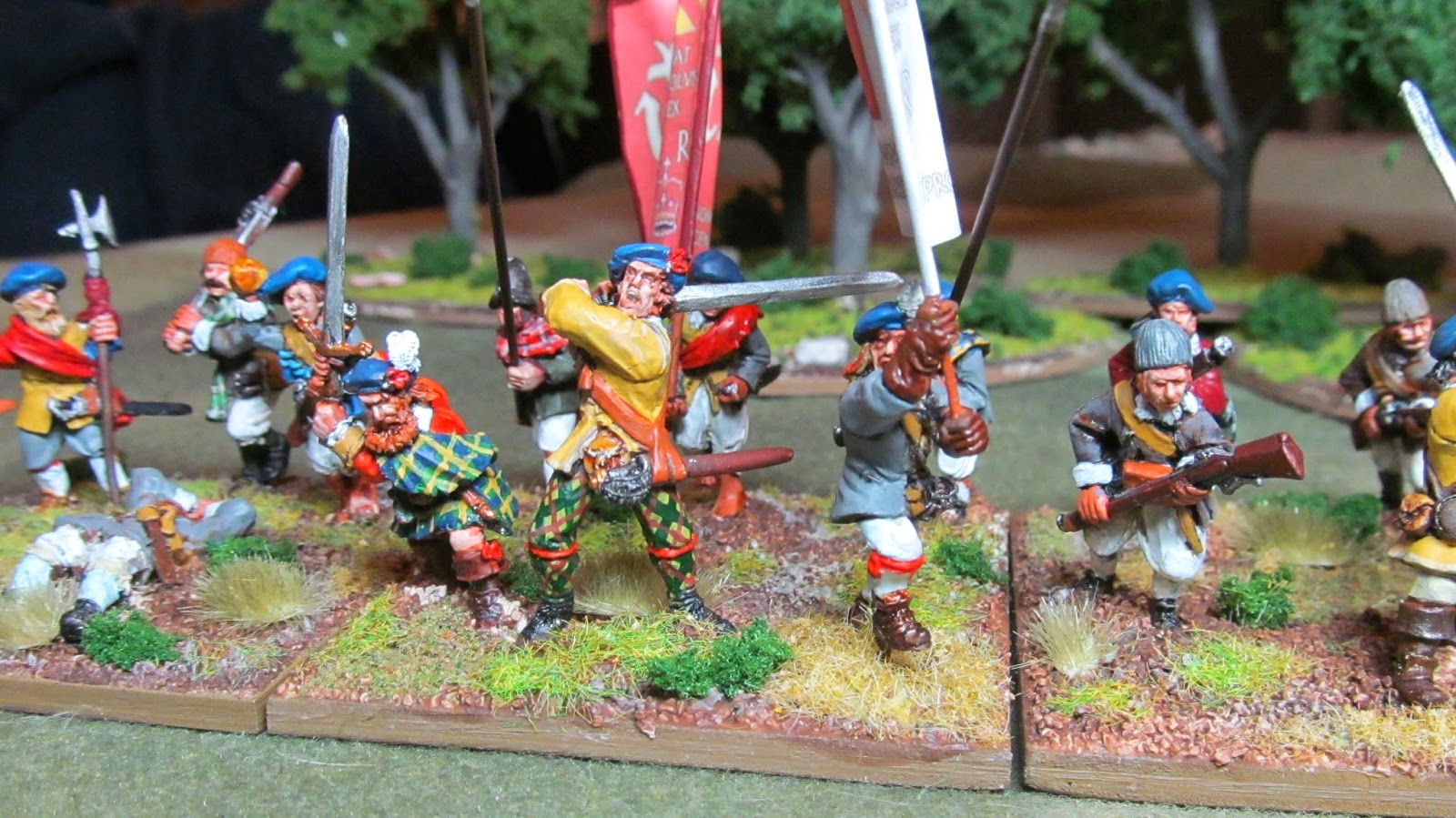 The finish out the unit I added 2 pikeman at port, one pikeman advancing which was converted to an ensign (officer carrying the flag) and the Highlander Ensign. 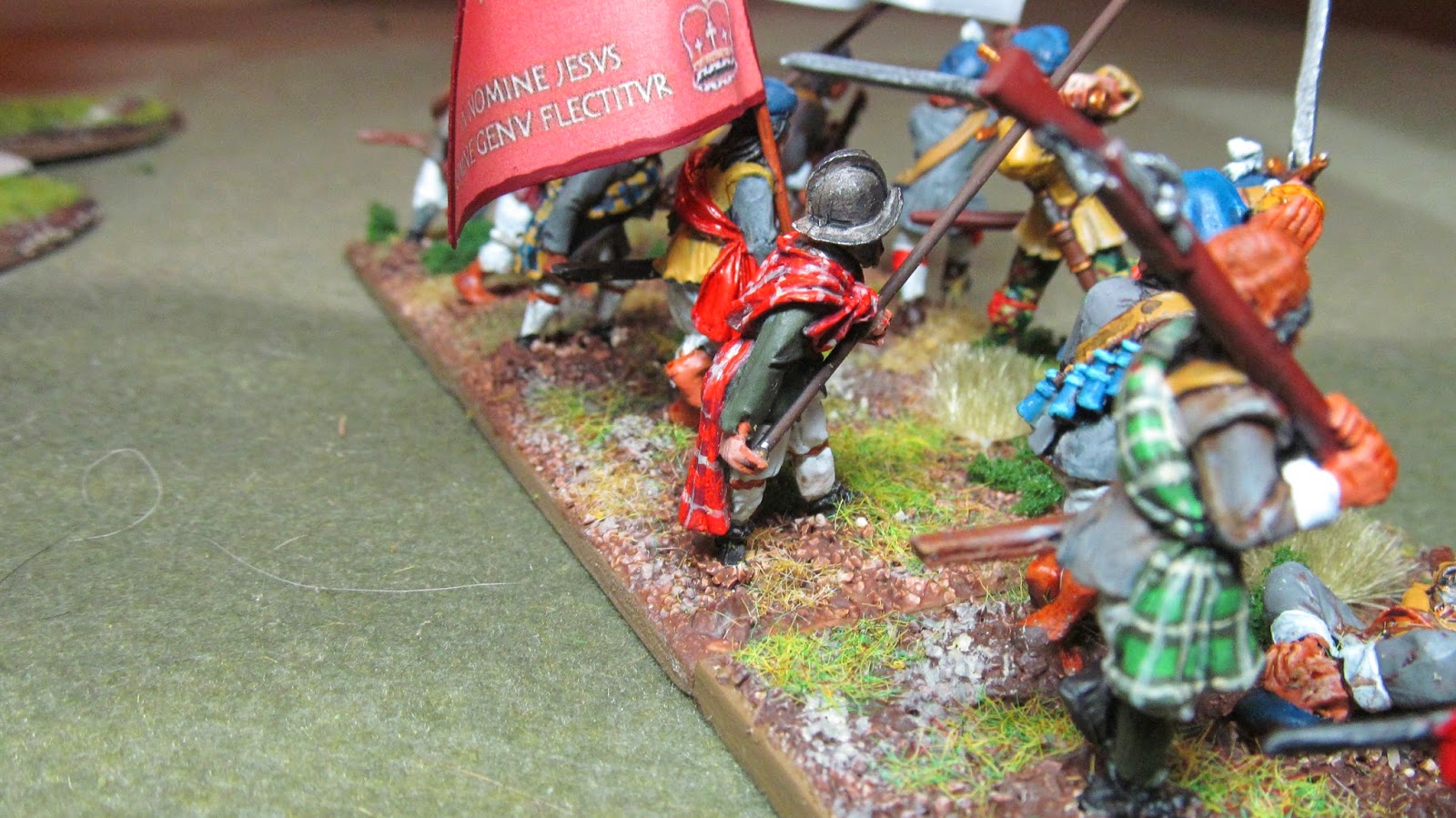 Sideview of the pikeman charging with Morion Helmet and the pikeman advancing with bonnet. I cut down the pikes that came with them and really reduced the pike for the flagstaff of the newly promoted ensign. 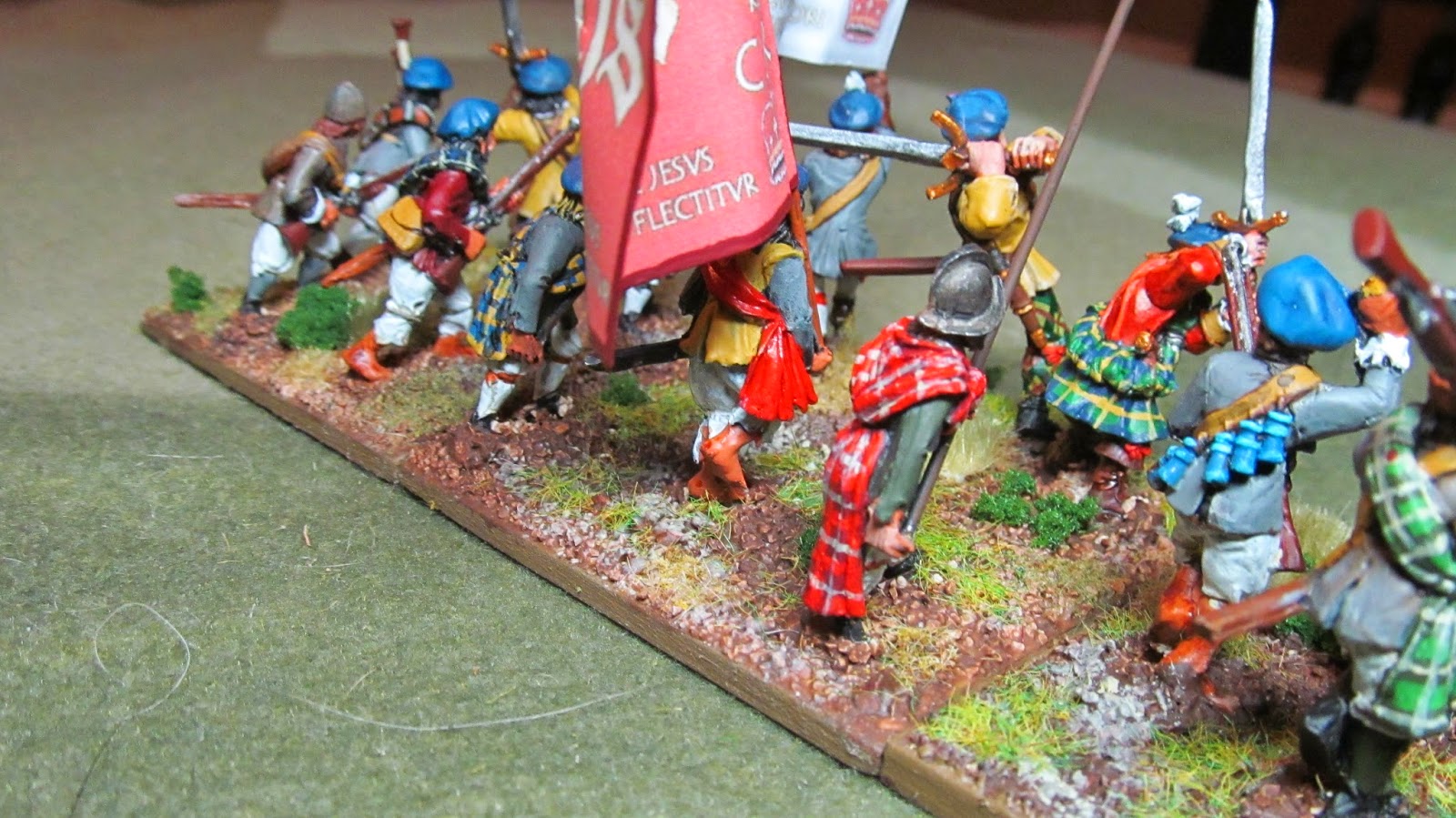 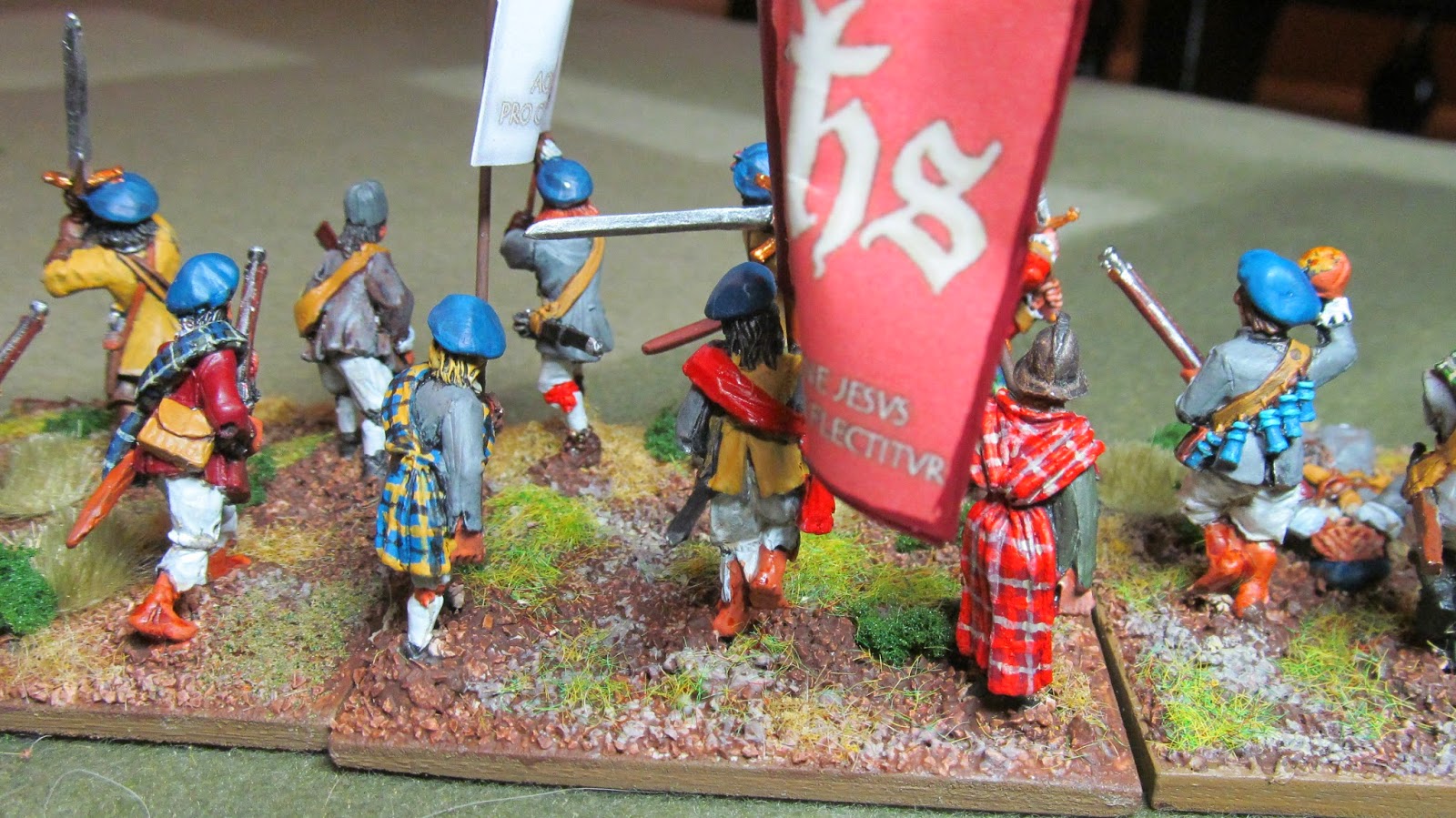 Rear of the three pikemen figures. I particularly like the pikeman at port with the Morion helmet due to the long plaid he is wearing over his shoulders and down his back. 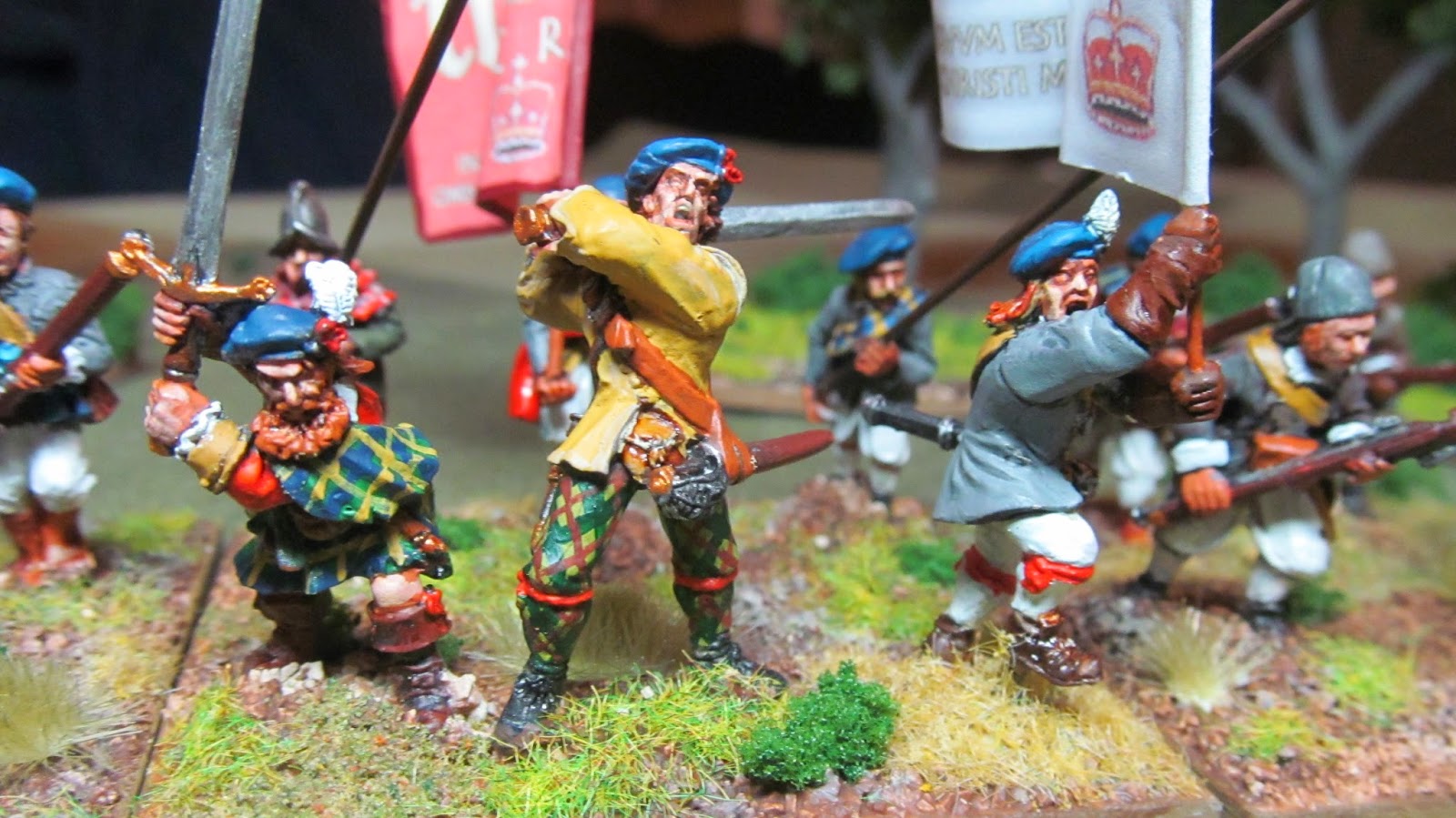 Good view of the expression on the Highlander Ensign's face.  He's coming at ya! 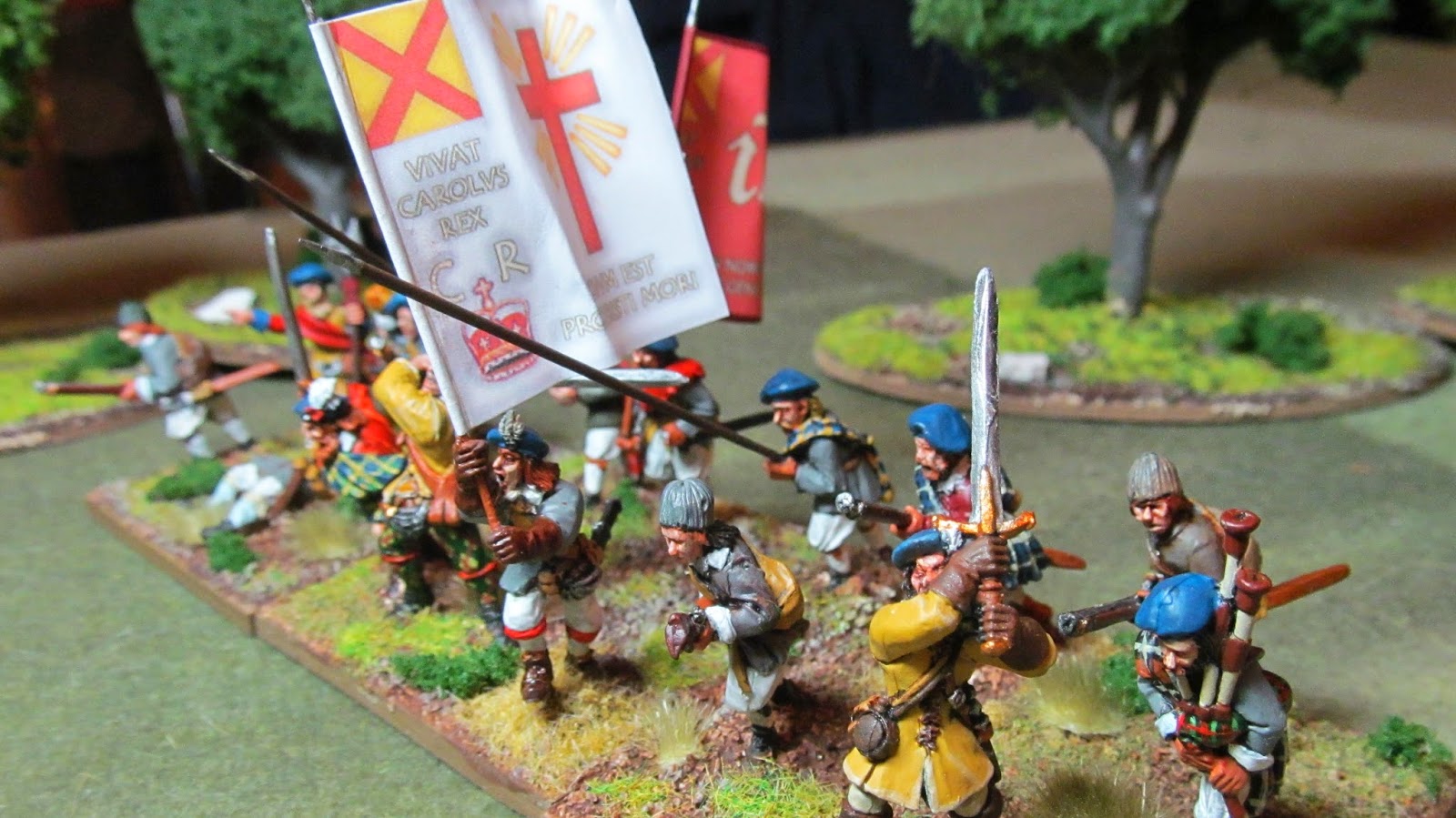 I can't rave enough about the quality and animation of the Warlord Games English Civil War range. Great figures make it easy to paint.
Posted by Neil at March 01, 2015