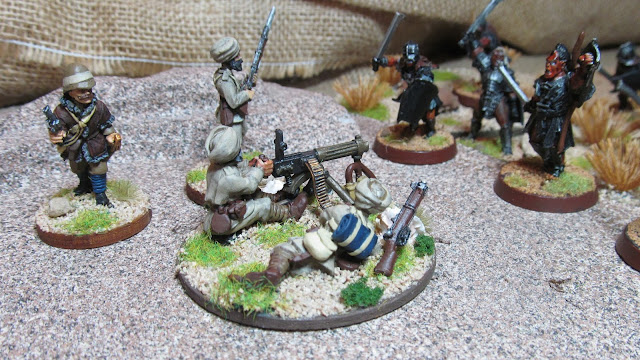 The "Wand of Automatic Missile Fire"; known in the ancient Elvish as the Maxim Machine Gun.

For Father's Day Honorable Son #1 (The Librarian) sent me a blister pack from Copplestone Casting's Back of Beyond range of miniatures: Indian Army HMGs.  The pack came with Sikh and Muslim infantry Maxim machine guns; however, I think I was missing one figure as there was no assistant gunner for the Muslim machine gun.  Oh well.  Beautiful figures.  As I am currently just using Sikh's that was no big deal and I would actually convert the kneeling figure with rifle for another project. 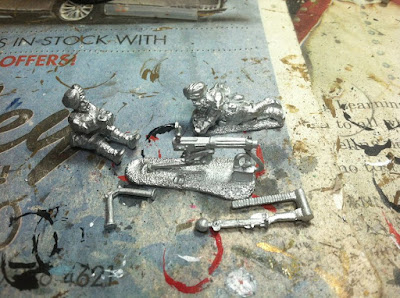 For In Her Majesty's Name I only need 2 figures for the machine gun team and I am not planning on using a machine for now in my armies for The Men Who Would be Kings.  As much as possible for my colonial gaming I want to maximize figures that I can use for both rule sets.  The basic machine gun team is seen above with machine gun, bipod that actually is part of the tripod of the machine gun, gunner, assistant gunner and a belt of ammunition with the assistant gunner's rifle.  All of the components fit easily together with super glue and I did not see any flash or obvious mold lines. 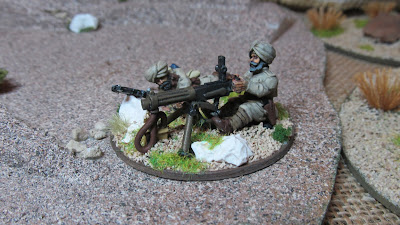 I have been experimenting with mixing colors with metal paints and the barrel and tripod were a mix of GW's Catachan Green and Shiny Gold.  The water hose is just Vallejo Flat Brown and the rest of the gun is Vallejo Gun Metal Grey highlighted with Vallejo Natural Steel.  The gunner and loader were painted per my test figure.  The link for the step by step for is located here: Sikh Infantry Painting Guide. 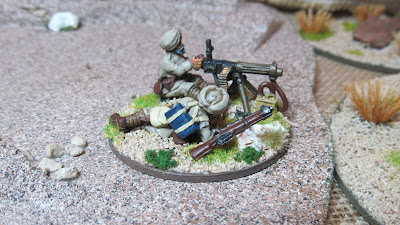 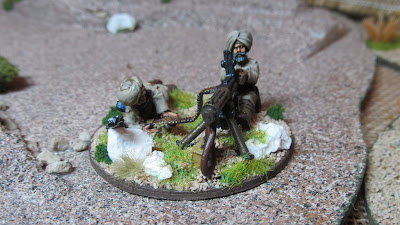 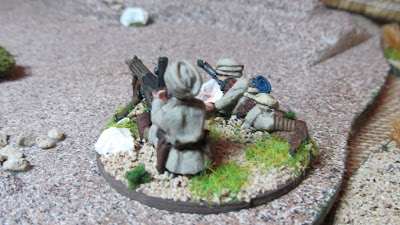 After I put the figures together on the base, with retrospect I should have trimmed the belt of ammunition to make it smaller; after all, what self-respecting assistant gunner would let the belt of ammunition accidentally lay in the ground?  I must highly recommend this blister pack - easy to paint like all great figures and a delight that everything fit together perfectly! 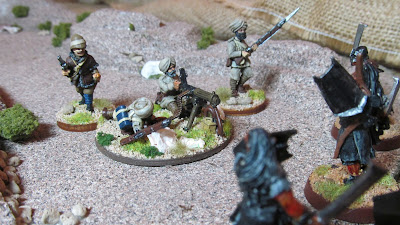 One last view as the minions of the Witch King of Sokur are surprised with intense accurate fire.
Posted by Neil at July 12, 2016

Email ThisBlogThis!Share to TwitterShare to FacebookShare to Pinterest
Labels: Colonial Gaming, Copplestone Castings, In Her Majesty's Name, The Men Who Would be Kings, Vallejo Paints, Victorian Sci Fi