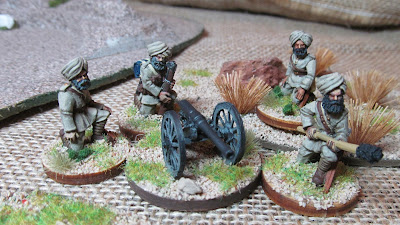 Next up is the Mountain Gun and Crew (Indian) from Artizan Designs.  The blister pack comes with the Ordnance RML 2.5 inch mountain gun which was a British rifled muzzle-loading mountain gun of the late 19th century designed to be broken down into four loads for carrying by man or mule. 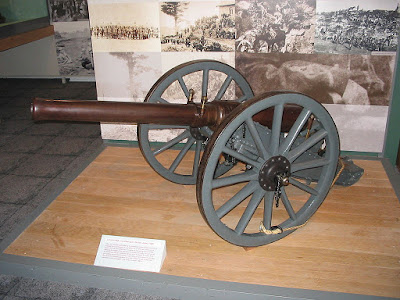 It was primarily used by the Indian Army but also saw service with other units in the British Army and was in service from through the middle of World War I.  The Artizan Designs gun is made of resin and is surprisingly fragile.  I broke it twice trying to put it together; unfortunately there are no instructions on how to put it together and thus it turned into a homework assignment as I researched images of the gun.  Super glue fixed the breakage and I am pretty sure I put it together right! 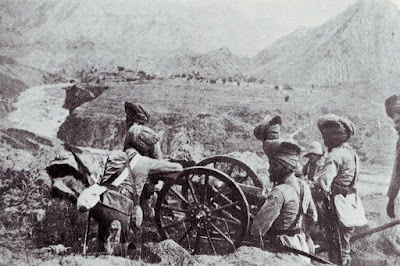 There are 3 nicely sculpted figures that come with the gun; put since I am using it for In Her Majesty's Name and The Men Who Would be Kings, I needed a 4th figure to keep track of hits for the gun for The Men Who Would be Kings.  Fortunately I had a leftover figure from the Copplestone Back of Beyond Indian machine gun and an extra Artizan Designs Sikh Infantry soldier so with an  impressive head swap (for me) I had an extra figure. 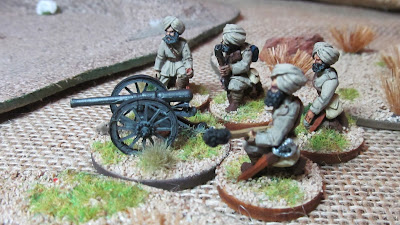 For painting I used my quick and easy painting of Sikh Infantry from a few posts back for the gunners.  For the gun the metal is Vallejo Natural Steel with some GW Adeptus Battle Grey for the wood. 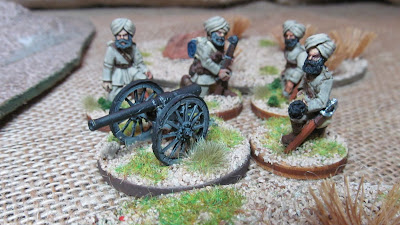 Email ThisBlogThis!Share to TwitterShare to FacebookShare to Pinterest
Labels: Artizan Designs, Colonial Gaming, Copplestone Castings, In Her Majesty's Name, The Men Who Would be Kings, Vallejo Paints, Victorian Sci Fi