Robert Warburton, born in a Ghilzai fort between Jagdallak and Mak on 11 July 1842, was the only son of Robert Warburton a lieutenant-colonel in the Royal Artillery, by his wife, an Afghan lady related to the Afghan Royal family. At the time of his birth his mother was flying from the troopers of Sardar Muhammad Akbar Khan, who pursued her for months after the massacre of English at Kabul on 1 November 1841. She was sheltered by her relatives, and finally rejoined her husband on 20 September 1842. 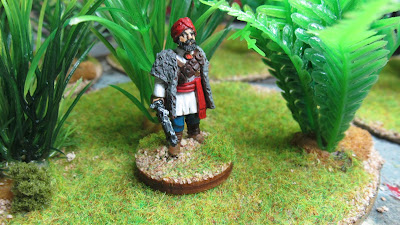 In 1862, Warburton returned to India as a young artillery officer and stationed with the 1st battery of the 24th brigade at Fort Govindghar, the fortress of Amritsar. In 1866, the financila failure of the Agra and Masterman's bank left him with only his pay to support himself and his mother. To increase his resources he exchanged into the 21st Punjab infantry. While serving with the transport train he showed great tact in conciliating native feeling and received the thanks of Sir Robert Napier for his services. On his return to India in April 1869, he was attached as a probationer to the 14th Sikhs, and in July 1870 he was appointed to the Punjab commission as an assistant commissioner to the Peshawar division. 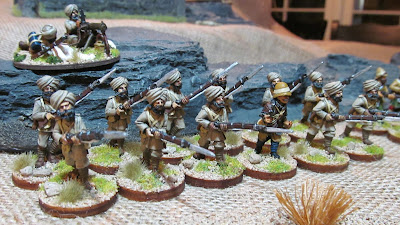 14th Sikhs on the Punjab.
At the end of September 1872, he was removed temporarily to the sub-district of Yusafzai and stationed at Hoti-mardan, and in February 1876 he was permanently appointed. Under Sir Pierre Louis Napoleon Cavagnari, he took part in several enterprises against the hill tribes who persisted in raiding British territory, particularly against the Utman Khel in 1878, and was five times complimented by the government of the Punjab and thrice by the secretary of state for India. In 1879, during the Afghan campaign, Cavagnari made repeated applications for his services, but the Punjab government refused to spare him. In July, however, he was appointed political officer of the Khyber, a post which he held for eighteen years. 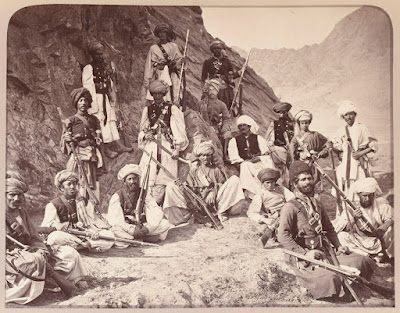 The Khan of Lalpura, the leading Mohmand chief, and, at his right shoulder, seated behind the rock, the British political officer in the Khyber, Captain (later Colonel Sir) Robert Warburton.

In the British Empire, a Political Officer or Political Agent was an officer of the imperial civil administration, as opposed to the military administration, usually operating outside imperial territory. The title was particularly attached to a government official acting as a political adviser to the ruler of one of the princely states in pre-independence South Asia, though it could also designate a kind of special envoy or ambassador (e.g. "Political Officer to Afghanistan"). 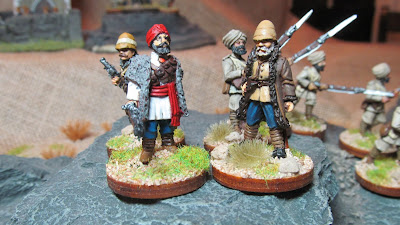 Colonels Warburton and Armstrong discuss the situation on the frontier with rumors of Russian spies in the hills with the tribal nations.
He obtained a remarkable influence over the hill tribes, perhaps in part due to his Afghan blood. He raised the Khyber Rifles from among these tribes, a force which for many years kept the pass tranquil. His camp became the rendezvous of mutually hostile tribesmen, who carefully refrained from hostilities so long as they remained within its precincts. 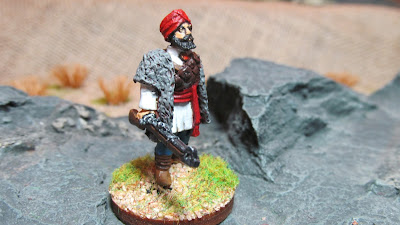 Colonel Warburton speaks softly but he does carry a very big gun. 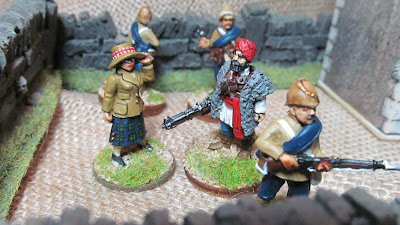 Colonel Warburton is always on the front line and occasionally other "visits" others on behalf of the Viceroy: 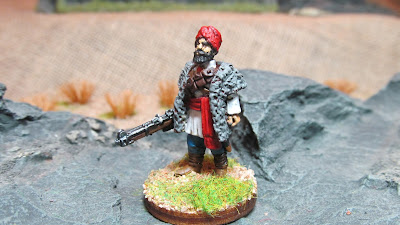 Moving on to the next tribal area.  Figure from the Artizan Designs Afghan Characters.  He will also be used as a Tribal leader in The Men Who Would be Kings.

Special Thanks to Gordon Richards for the inspiration for the Political Officer.  Visit his great blog at I have wrought my simple plan . . .

Email ThisBlogThis!Share to TwitterShare to FacebookShare to Pinterest
Labels: Artizan Designs, Colonial Gaming, In Her Majesty's Name, Neil List of Great Warriors, The Men Who Would be Kings, Victorian Sci Fi