As I mentioned earlier I am getting back to my roots with 1/72 scale plastic soldiers.  I have decided to raise field forces for for both the Imperial Forces and the Zulus for The Men Who Would be Kings. 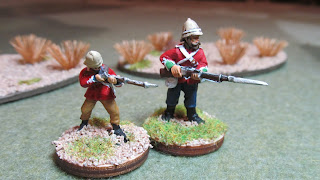 As I already have Imperial units and have started Afghan units in 28 mm I thought building forces of large tribal infantry in 1/72 would be an inexpensive and visually impressive collection.  First up is a unit of British mounted infantry. 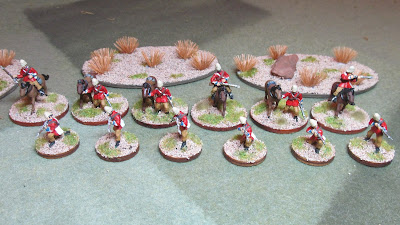 The mounted infantry consisted of two squadrons of 150 men each, a total of 300 enlisted, NCOs and officers. The men of the Imperial mounted Infantry were regular soldiers taken from several regiments within the British Army in South Africa. The men included troops from the 3rd, 13th, 24th, and 80th Regiments of Foot. The soldiers retained their foreign-service helmets and regimental tunics, but were issued with Bedford cord breeches, riding boots and a brown leather ammunition bandolier. They retained their haversacks and Oliver pattern water-bottles but discarded the rest of their valise pattern equipment for mounted service. 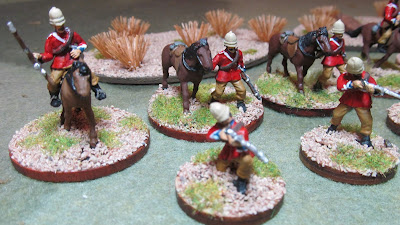 The Mounted Infantry proved a versatile force for scouting and skirmishing. They would screen the main column and provide cover for advancing troops. They were more reliable and versatile than many other Anglo-Allied cavalry units because they had experience being regular British foot soldiers as well as cavalrymen.  During the initial advance into Zulu Land, the first squadron of Mounted Infantry was attached to No. 3 Column that made camp at Isandhlwana. The second Squadron was with No. 1 Column. 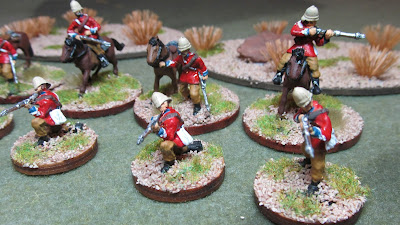 As the name suggests, the mounted infantry invariably dismounted to fight, telling off one man in four as horse-holders. 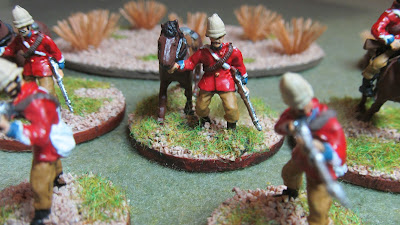 Of course I painted them with blue facings and it looks like none of the mounted infantry have blue facings . . . oh well. 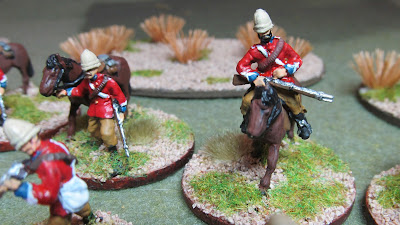 In The Men Who Would be Kings a regular mounted infantry unit is composed of 12 figures and can move 8" making it a fast, hard hitting infantry unit. 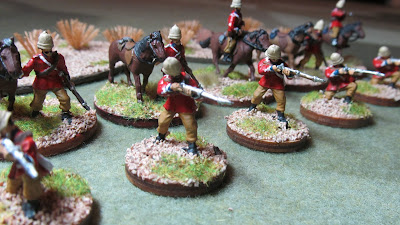