IHMN: The British Allies during The War of the Witches 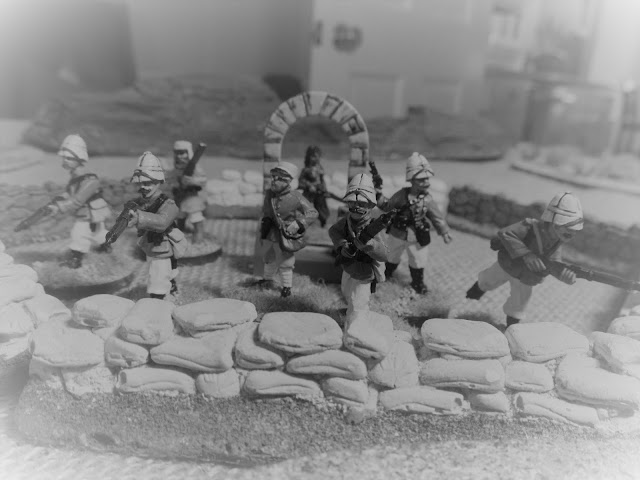 Be as it may, the Tesla portal is in Algeria and I sent an urgent telegram to Lieutenant Colonel Jacques Duchesne to secure the way point and prevent the Witch King from entering." "What was his answer?" "The Legion does not surrender."

From the private diary of Dr. John Watson, MD:

When I look back upon those fateful years of 1894 through 1895, little did I realize how much my personal world, and the world at large would change.  Allies were needed, and my good friend, Mr. Sherlock Holmes was dubious and did not trust many he encountered in these dangerous times.  Fortunately Holmes tracked down and arrested Huret, the Boulevard assassin - an exploit which won for Holmes an autograph letter of thanks from the French President and the Order of the Legion of Honour. More importantly, it put at Holmes disposal a contact in the French Foreign Legion to assist us in the upcoming war of good versus evil . . .

1. The French Foreign Legion.  Legionnaires are highly trained infantry soldiers and the Legion is unique in that it was, and continues to be, open to foreign recruits willing to serve in the French Armed Forces. The Legion is the only part of the French military that does not swear allegiance to France, but to the Foreign Legion itself.  In addition, Professor Moebius and his daughter Amelie are valued members of the Legion, though there status as to whether they are Legionnaires is not actually known outside of the Legion. 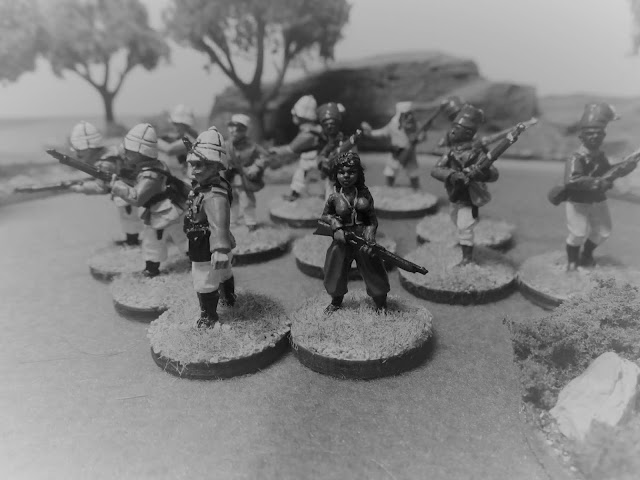 Amelie Moebius looking fashionable in her Zoauve uniform.  Yes, she knows how to use that rifle and her mind; her mesmerizing beauty can make unsuspecting méchants do her will. 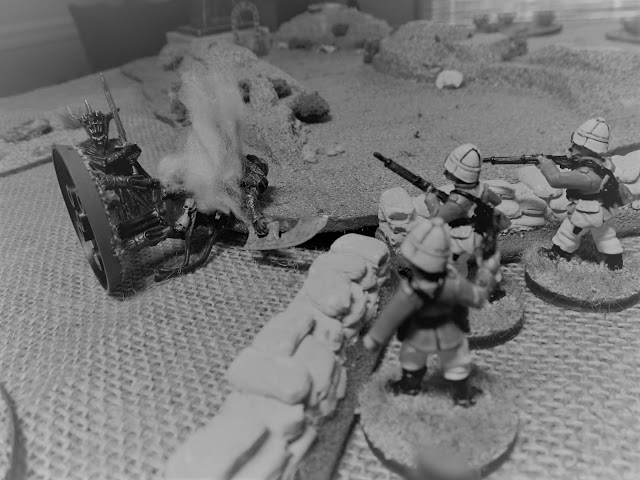 Lieutenant-Colonel Jacques Duchesne places a well aimed shot with his arc pistol killing the Destroyer.  He didn't earn his Expert Pistol Marksmanship badge not to use it. 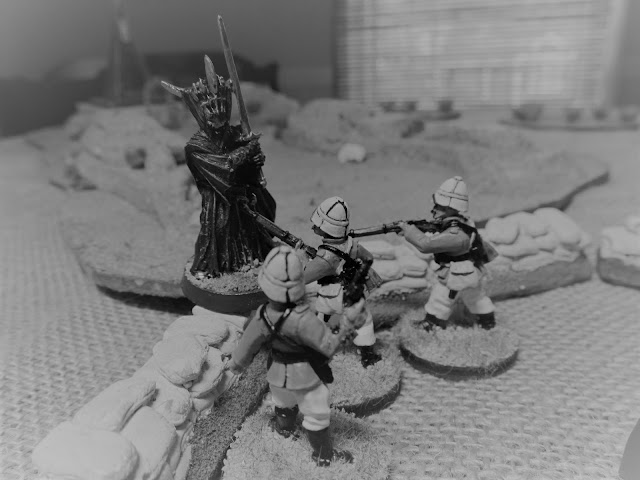 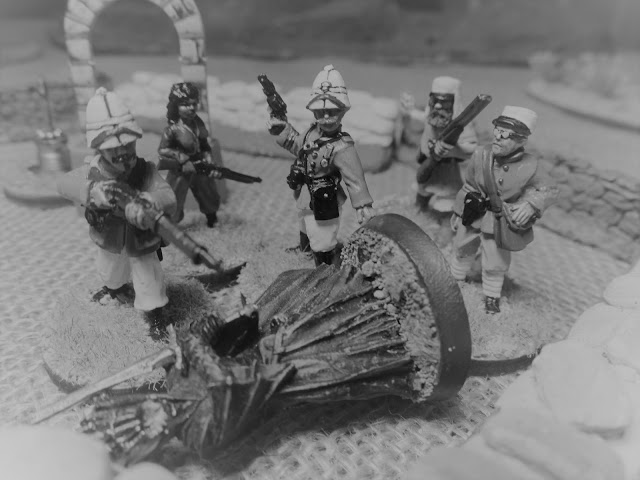 The Witch King was captured by the Legion but later escaped after the Zouaves guarding him mysteriously . . . well . . . melted 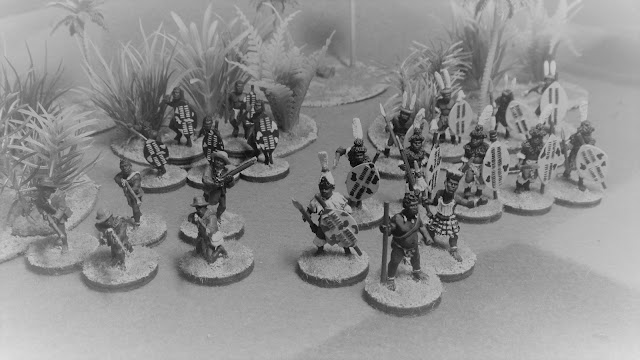 Natagala warband on the move

Though long isolated, they are a vibrant and rich kingdom that is starting to adopt and use modern technology.  The backbone of the kingdom are it's fierce and formidable warriors - and the occasional witch doctor doesn't hurt either. 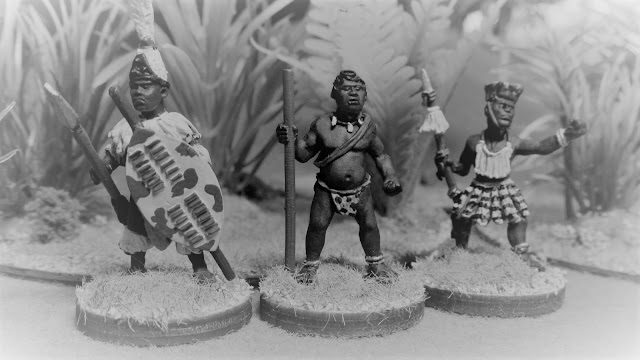 King Mehluli, his royal bodyguard Lindani and Ntando of the High Temple.  Note the Royal Staff of Big Whopping carried by the king.


"Majesty!" panted Lindani as he ran in to the palace. King Mehluli turned his gaze upon him and stated,"What is it Commander of the Royal Watch?"
"She comes. The one Tarzan warned us about. She wants to destroy your kingdom and enslave our people."
"So, this Wicked Witch of the West, a being not of this world, wants to challenge Natagala?" queried Ntando of the High Temple.
"That is so", replied Lindani.
"Evacuate the city, engage all defenses, and bring me The Royal Staff of Big Whopping," replied King Mehluli. 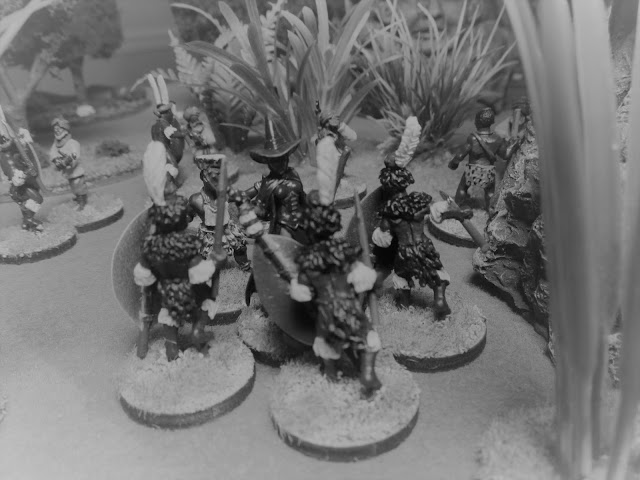 Natagala forever!
3. Astragard.  Since the discovery of the uncharted island name Astragard by the French dirigible Hyperion, the lost Viking civilization that has been cut off from the rest of the world for centuries amd is now making an impact at the end of the 19th Century in the world of In Her Majesty's Name. 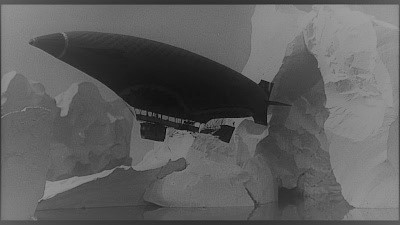 In Norse mythology, Surtr (Old Norse "black"or "the swarthy one") is a jötunn or giant. Surtr is attested in the Poetic Edda, compiled in the 13th century from earlier traditional sources, and the Prose Edda, written in the 13th century by Snorri Sturluson. In both sources, Surtr is foretold as being a major figure during the events of Ragnarök; carrying his bright sword, he will go to battle against the Æsir and their allies, and the flames that he brings forth will engulf the Earth. The people of Astrgard believe that the Witch King of Sokur is Surtr.  And nothing will get in their way from killing him . . . 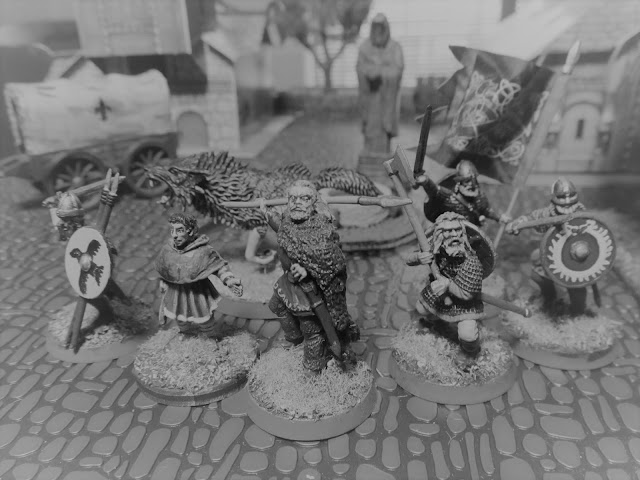 Erik Niallson and the men of Astragard.  His constant companion is his wolf Fenrir who is officially classified as a War Poodle.

4. The German Imperial Marines and Schutztruppe. Schutztruppe (literally "protection force") was the official name of the colonial troops in the African territories of the German colonial empire from the late 19th century.  Similar to other colonial armies, the Schutztruppe consisted of volunteer European commissioned and non-commissioned officers, medical and veterinary officers. Most enlisted ranks were generally recruited locally. Though technically not allies, Herr Doktor Professor Kernal von Sanders has convinced the Imperial Court to "cooperate" with the British. 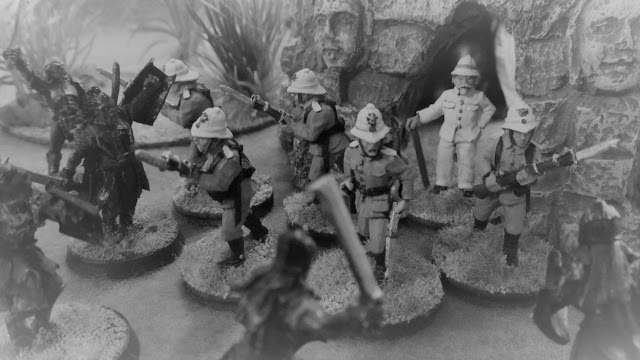 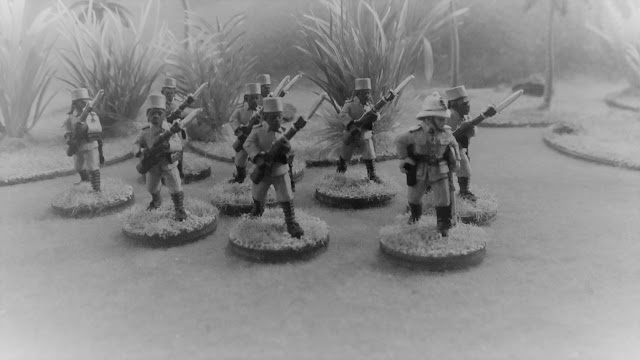 Hauptmann Richter leading a unit of Schutztruppe Askari into battle.

Next Up: Criminal Gangs in "The War of the Witches."
Posted by Neil at 4:32 PM