IHMN: The War of the Witches Season 4.1

The War of the Witches is a series of adventures that take place in the fictional Victorian Universe of the the late 19th Century using the versatile rules In Her Majesty's Name. In Season Four, the worst of Sherlock Holmes' fears come to fruition as open warfare from creatures with inhuman powers start to defeat all that is good. The discovery of the Tesla gates add to the dilemma but hopes are raised as the United States joins the fight . . . and the unexpected discovery of another hidden world. 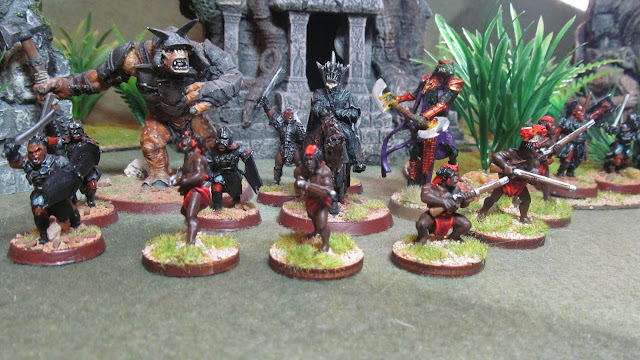 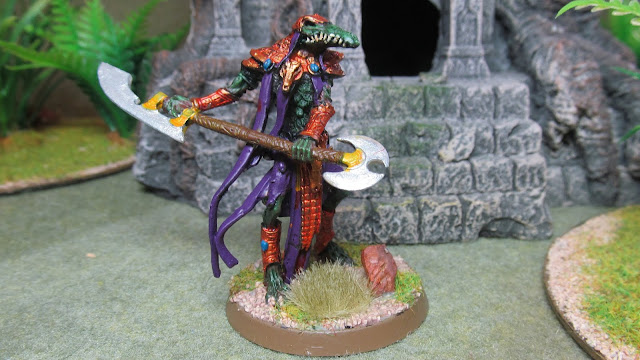 The Destroyer
It was a wild, tempestuous night, towards the close of November. Holmes and I sat together in silence all the evening, he engaged with a powerful lens deciphering the remains of the original Necronomicon, a feat I was regretting might drive him to madness.  It was strange there, in the very depths of the town, with ten miles of man's handiwork on every side of us, to feel the iron grip of Nature, and to be conscious that to the huge elemental forces all London was no more than the molehills that dot the fields. I walked to the window, and looked out on the deserted street. The occasional lamps gleamed on the expanse of muddy road and shining pavement. A single cab was splashing its way from the Oxford Street end when Holmes suddenly shouted," That American, that foolish American!"
"What is it?" I asked.
"Roosevelt.  That foolish Roosevelt.  The Witch King has the Jewel of Chance."
"I have no idea what you are referring to my dear Holmes.  Who is the Witch King?
"Well, Watson, it's as well we have not to turn out tonight.  HE wants us Watson.  HE wants us." 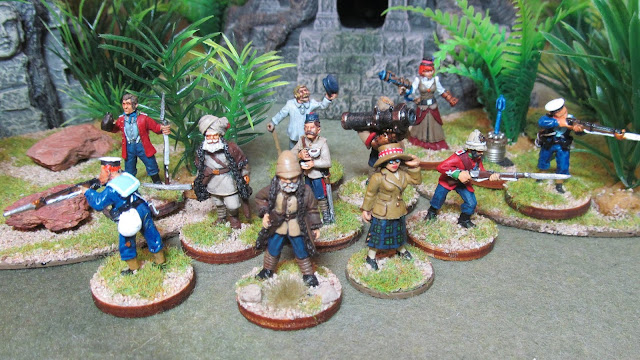 From the Journals of Doctor John Watson, MD:

It was some time before the health of my friend, Mr. Sherlock Holmes recovered from the strain from his studies of that cursed book The Necronomicon.  I was afraid that his failing health, caused by his immense exertions, would be his undoing.
"By the way," said he suddenly, "I think I'll take one of these pistols with me when we go."
"Go?  Go where?" I exclaimed.
"Why to visit my brother Mycroft of course and fight a war."
"Fight a war?  But the government -"
"My dear Watson.  Mycroft is the government.  And it is time to activate Department H against the Witch King."
"What is Department H?"
"Watson, there is no Department H." 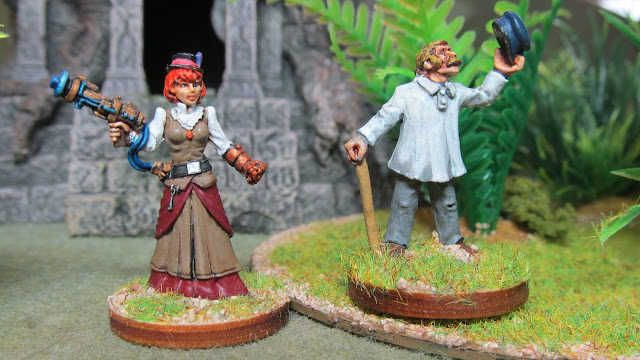 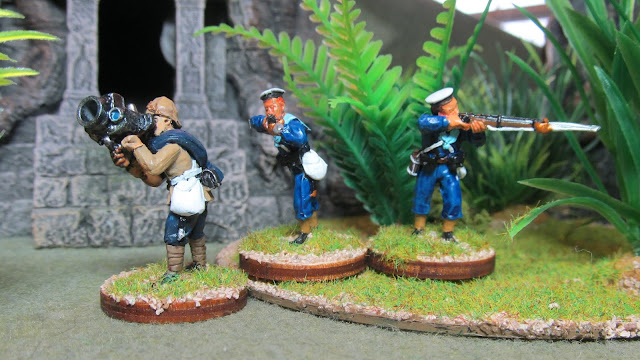 Forces and Official resources from throughout the British Empire. 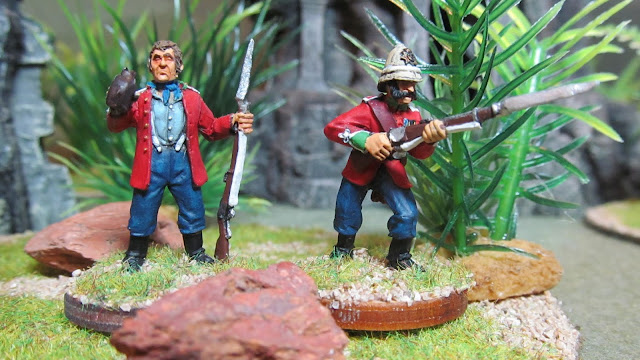 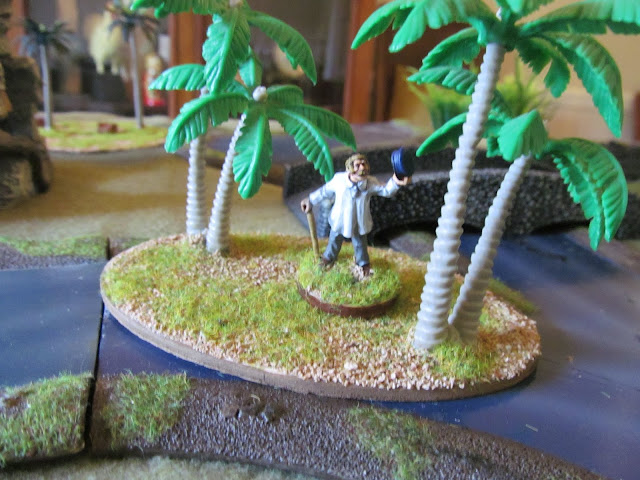 "Ph'nglui mglw'nafh Cthulhu R'lyeh wgah'nagl fhtagn."  Ghycni, Captain of the Ruga-Ruga guard could hear his master chanting as he entered the musty room and waited patiently for his command. 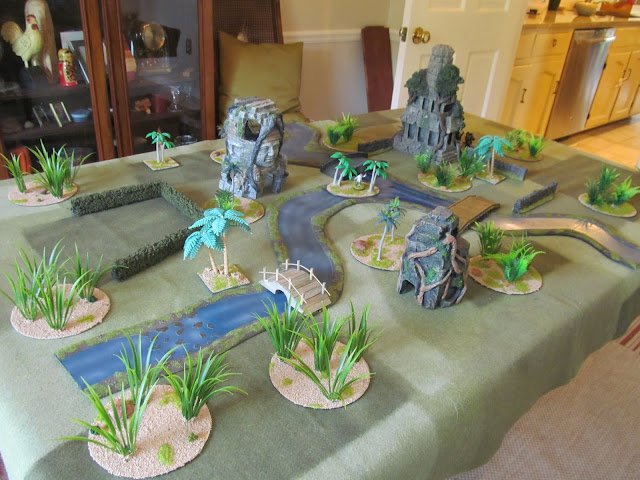 Professor Nightengale is lost somewhere in an ancient city

"The most merciful thing in the world, I think Ghycni", the Witch King started, "is the inability of the human mind to correlate all its contents... some day the piecing together of dissociated knowledge will open up such terrifying vistas of reality, and of our frightful position therein, that they shall either go mad from the revelation or flee from the light into the peace and safety of my new Dark Age. We have a new enemy, one that may foil our plans so we will strike first.  We will kidnap Professor Nightengale." 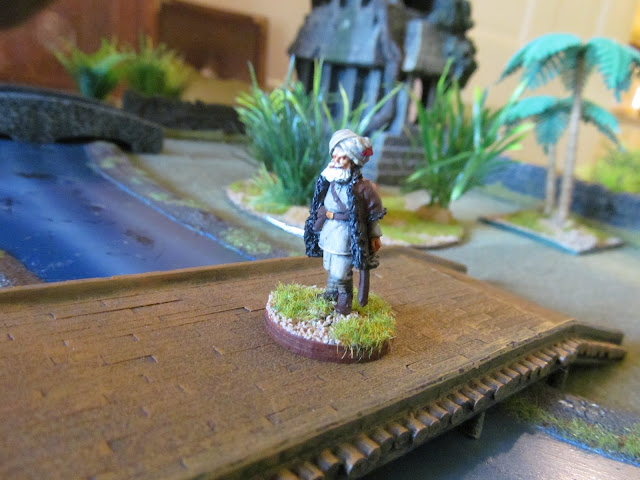 The first mission of Department H (there is no Department H) was an unmitigated disaster as the famous Professor Nightengale was kidnapped by the Witch King. 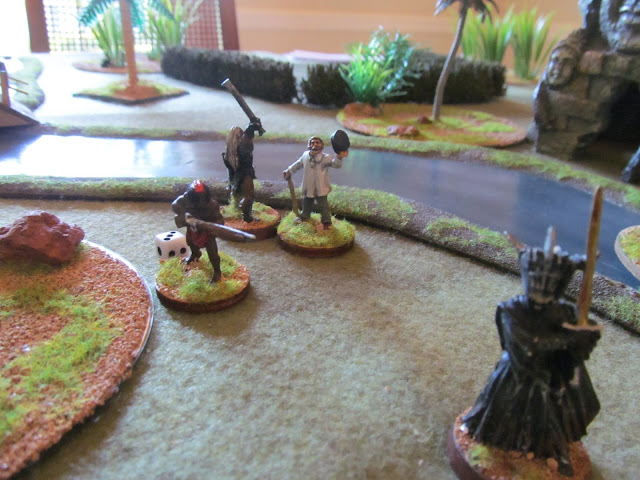 The Witch King muses, "Heck, I didn't even need to be here for this fight."

From the private journal of Dr. John Watson, MD:

I was not surprised. Indeed, my only wonder was that he had not already been mixed up in this extraordinary case, which was the one topic of conversation through the length and breadth of England. For a whole day my companion had rambled about the room with his chin upon his chest and his brows knitted, charging and recharging his pipe with the strongest black tobacco, and absolutely deaf to any of my questions or remarks. Fresh editions of every paper had been sent up by our news agent, only to be glanced over and tossed down into a corner. Yet, silent as he was, I knew perfectly well what it was over which he was brooding. There was but one problem before the public which could challenge his powers of analysis, and that was the singular disappearance of the public's favorite explorer and the failure of his brother to anticipate and gather the company that was needed in time . . . and if tragically if Mycroft could not anticipate the moves of the Witch King, what help could we depend upon in this most secret of wars?

Season 4: Episode 404: To Rescue a Professor 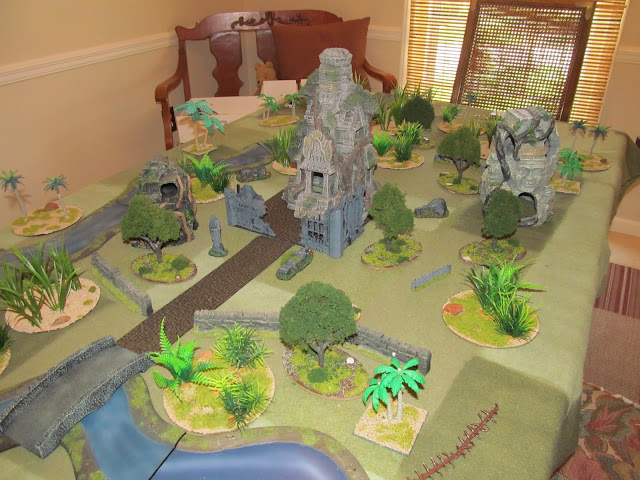 The Fortress of the Witch King

From the private journal of Dr. John Watson MD:
It was the latter days of September, and the equinoctial gales has set in with exceptional violence.  As evening drew in, the storm grew higher and louder, and the wind cried and sobbed like a child stuck in the chimney.  It was all the more surprising when a telegram was delivered in the midst of the storm. Holmes sat moodily at one side of the fireplace as he read the message, and then a spark twinkled in his eyes.
"What is it?" I inquired.
"My dear Watson. It looks like the peerage is getting involved in our little war."
"What do you mean?"
"Lord Greystoke is on the prowl." 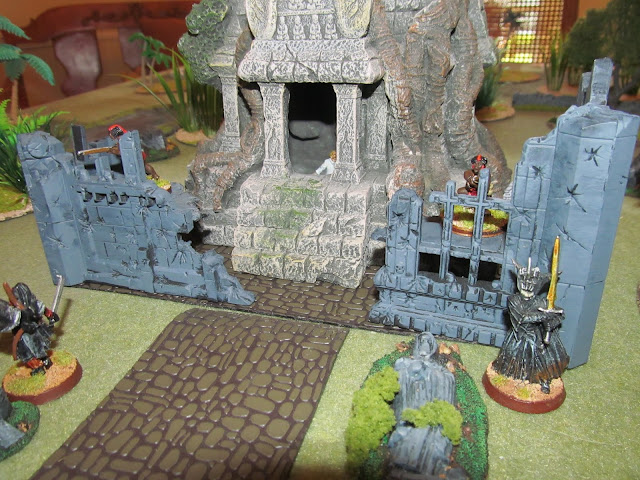 The prison holding the Professor.  The Witch King's company is mostly troglodytes and 2 Ruga-Ruga guardsmen.  Of course the Witch King is virtually a force of nature with heavy armor, mystical powers and a cursed sword. 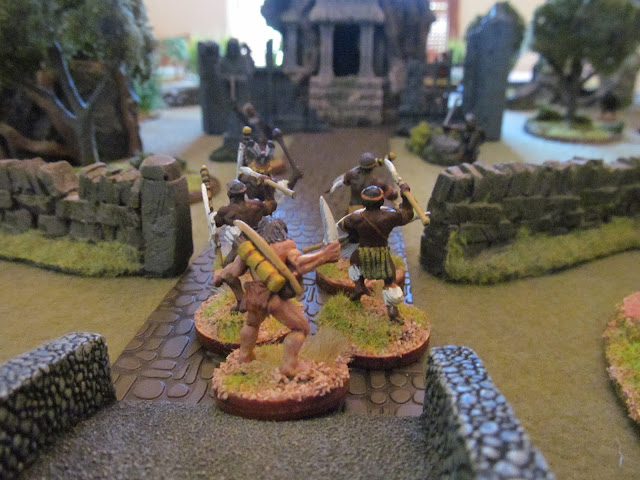 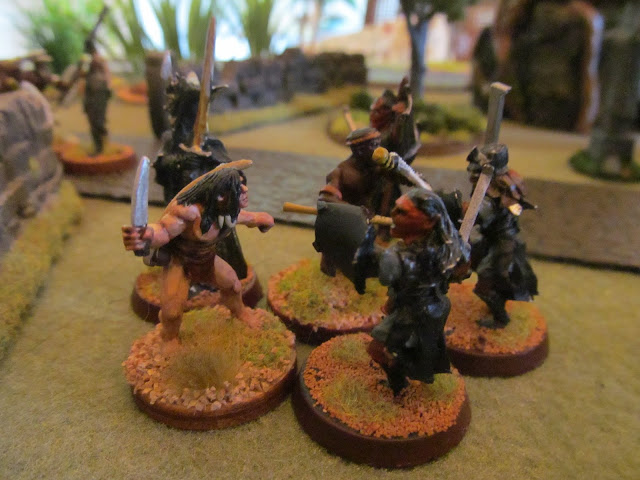 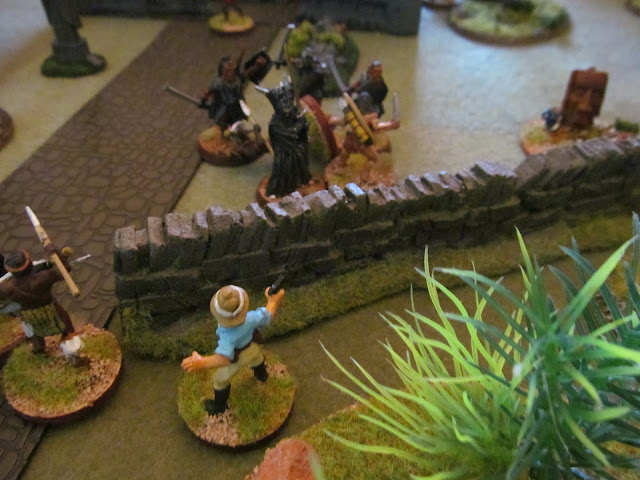 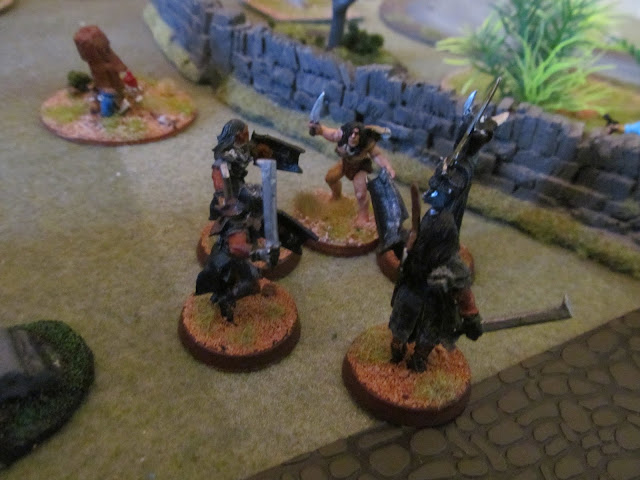 Tarzan dives into the fray distracting the enemy as his Waziri tribesmen storm the fortress. 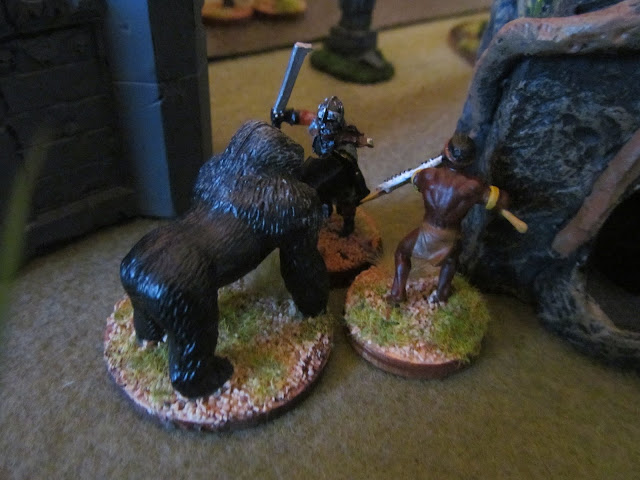 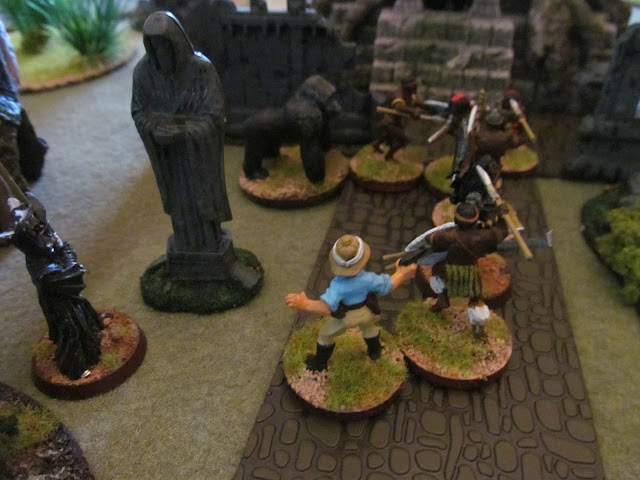 Though Lord Greystoke's company was able to destroy the Witch King's minions and his power base in Africa, they failed to rescue the famous Professor Nightengale as the Witch King seemingly disappeared with his captive.

From the private journal of Dr. John Watson, MD:

It was disturbing to see that great mind in such melancholy as he recovered during that fateful year of 1894.  As I had finished my practice for the day, and my wife was with her family, I decided to drop in on my old apartment and to make sure that Mr. Sherlock Holmes had not further sunk into depression and was once again experimenting with exotic drugs and concoctions of his own devising.  When I arrived, much to my surprise there was a young girl sitting in his room with the most amazing poodle I had ever seen. She was sweet tempered, a round rosy face and big earnest eyes filled with awe.
"Oh Watson, there you are.  May I introduce to you Miss Dorothy Gale of Kansas?"
I bowed politely, and Holmes must have seen the quizzical look on my face as I glanced at him.
"That's right Watson - it's time to get the Americans in the fight." 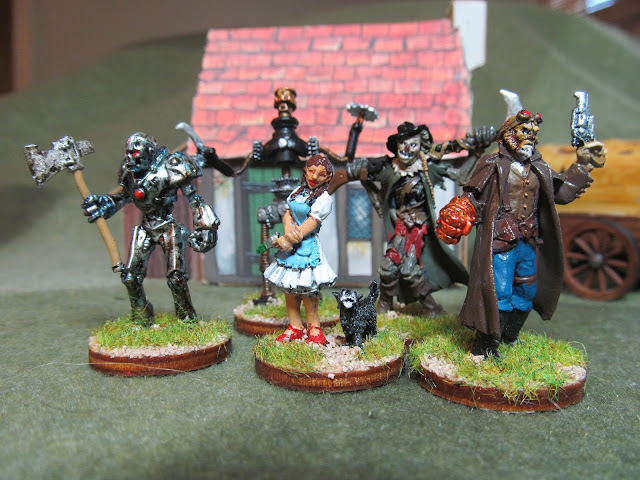 Sherlock Holmes informs Dr. Watson of the existence of the land of Oz and why the Witch King can move so quickly from place to place. It's the Tesla Gates discovered by Nikola Tesla. 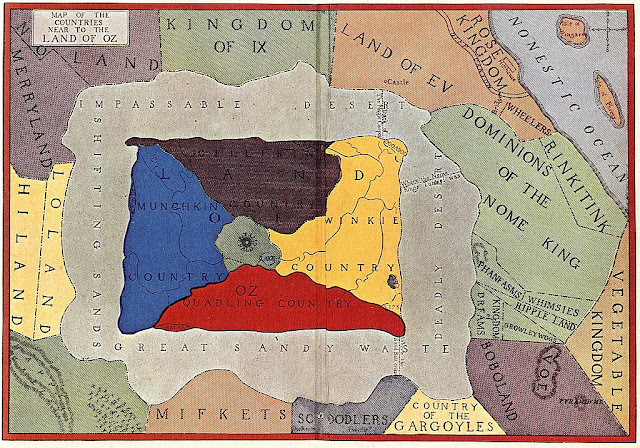 I watched the delightful Miss Gale leave the apartment and after she entered her cab I turned to Holmes.  "Witches?  Burning Deserts?  A magical land named Oz? My dear Holmes, do you really believe all of that?
"Yes I do Watson.  Yes I do."
"What can she possibly do?"
"Why kill a Witch King of course."

Season 4: Episode 405: Oz versus the Witch King of Sokur 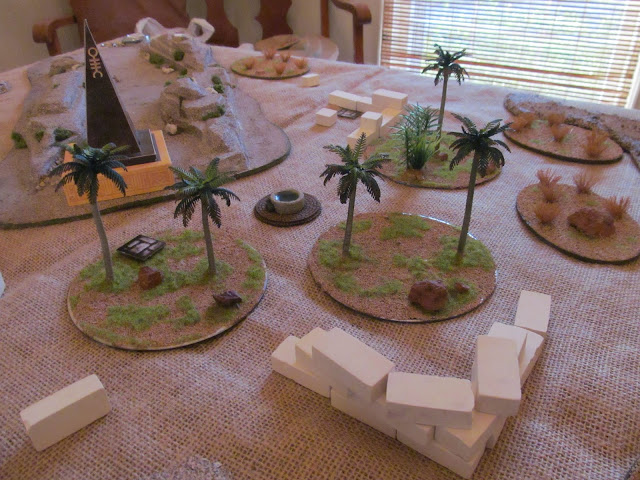 To her Imperial Highness, Princess Ozma of Oz,

I am sadden to inform you that the Witch King of Sokur has discovered a way to cross the Deadly      Desert; I suspect that he has applied his evil ingenuity, with magical assistance, or through unusual natural phenomena to cross and not have his followers turn to sand or die from the noxious fumes.  I apologize for the shortness of this note and warning: I'm afraid that he is searching for the Amulet of Isis that you hid near the Nome King's Tunnel. I am unable to intervene at this time but I am sure that you can summon the 3 Kings and Princess Dorothy to attempt to stop him. 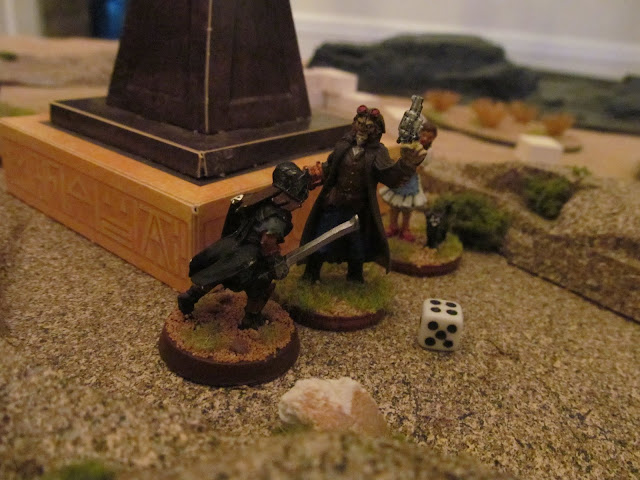 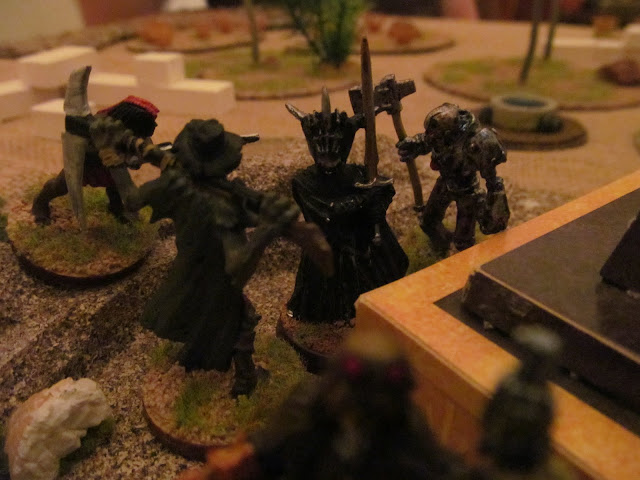 For the first time in his experience, the Witch King is feeling defeat as the three kings put a whopping on his butt.

Dorothy and Her Untouchables stop the Witch King in his tracks and force him to flee through a  Tesla gate which has an unknown destination . . .