In what would be known in history as the "War of Great Grazing Area Succession Dispute" or simply "The Pig War" the country of the Grand Duchy of Bluehofen went to war against the Principality of Redsteinerburg in 1741 over a strip of land bordering their lands.  The Grand Duke Gunter claimed the land through his marriage to Countess Gretchen who traced the claim back to her sister's husband's grandmother. Prince Leopold, on the other hand, claimed the land based on his previous marriage to the now deceased Princess Bromhilda's brother's wive's grandfather.  Regardless of claim, the dispute would be settled on the field of battle in central Germany. 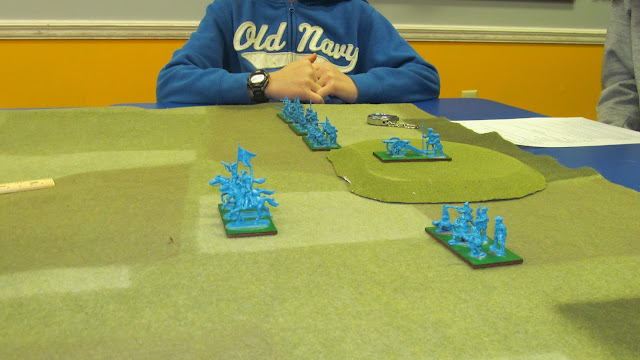 The first battle fought is Scenario 1: Pitched Battle from One Hour Wargames.  The learning objective of the battle was to make sure everyone understood the rules with minimal terrain.  Each side had 4 infantry regiments, 1 cavalry regiment and 1 artillery battery.  Above the forces of Bluehofen advance, The Grand Duke's Horse Regiment boldly moving ahead. 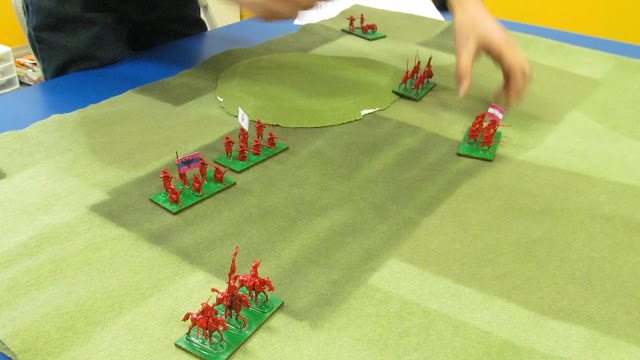 The steady infantry of Restenierburg move forward.  Prince Leopold decided to place his artillery on the extreme left flank and get them into immediate action while the Prince's Horse regiment moves out on the right flank. 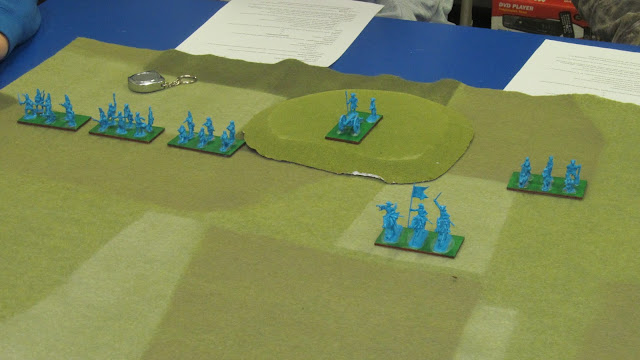 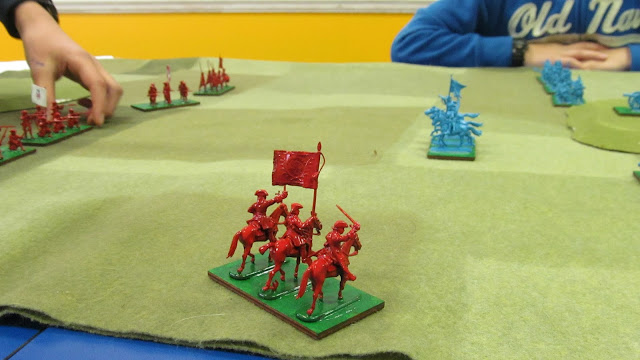 Prince Leopold, personally leading the division of infantry, sets up a steady line of muskets to entice the enemy horse to charge while the Prince's regiment starts to outflank the Bluehofen forces. 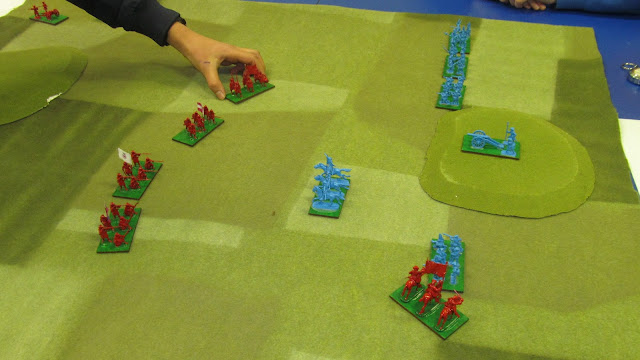 The Munchen Regiment of Foot is almost outflanked but suffers casualties as musket balls tear into the Grand Duke's Regiment of Horse. 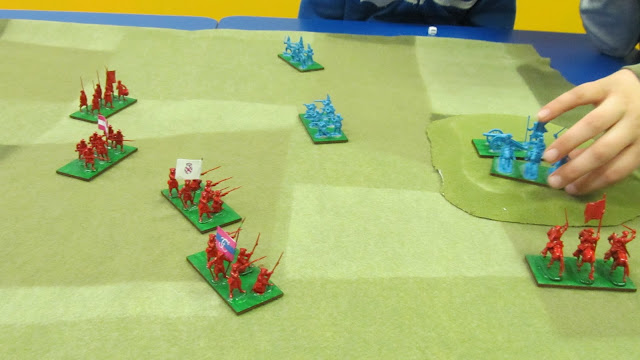 A second charge by the Grand Duke's Horse overwhelms the Munchen Regiment exposing the entire left flank of the Bluehofen army.  The Redsteinerberg foot march with the precision of Prussions after they destroy the Kluckein Regiment of Foot with massed musketry.  The Redsteinerberg artillery harasses the Grenadier Guards on the right flank. 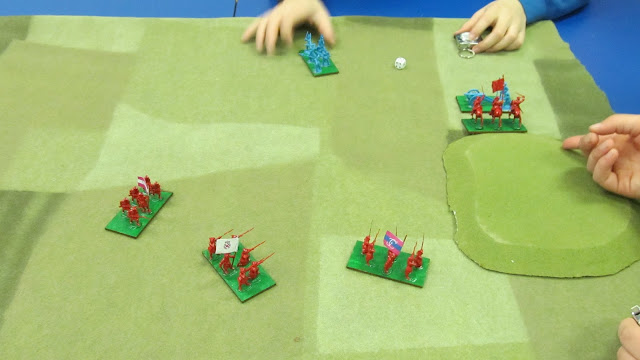 In a cavalry melee that would inspire the great composer Sebastian Buch, the Grand Duke's Horse sweeps away the Prince's Horse forcing the artillery to flee.  The Redsteinerburg 3rd Regiment of Foot leaves the battlefield but the once proud Bluehofen Swartzenburg foot is also destroyed by mass musketry as Bluehofen must constantly re-position its units as the left flank is enveloped. 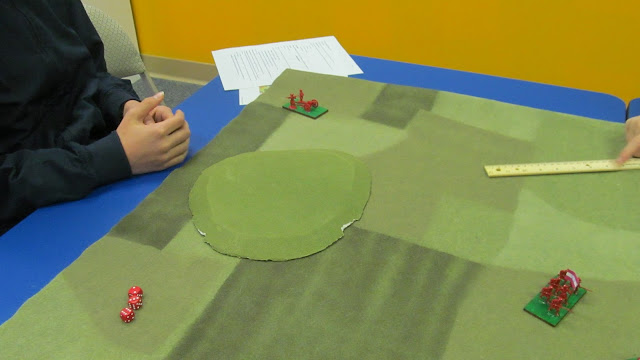 The 2nd Gun Battery of the Army of Redsteinerburg keeps up a steady fire that is slowly wearing down the Grenadier Guards. 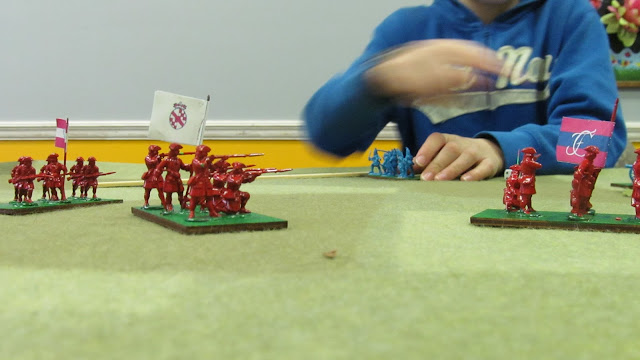 The Grenadier Guards close ranks allowing the Grand Duke to flee and fight another day. 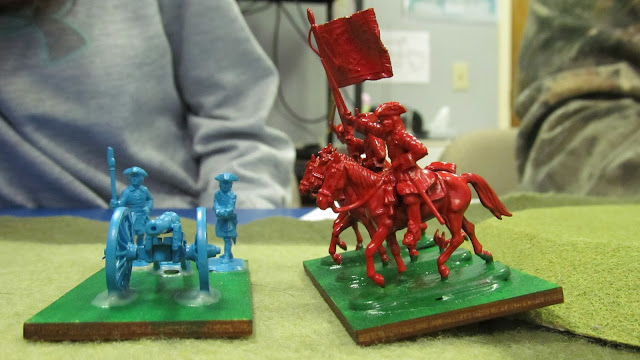 Flank attack by the Prince's Horse almost overruns the 1st Artillery Regiment but they will be destroyed in the very next turn. 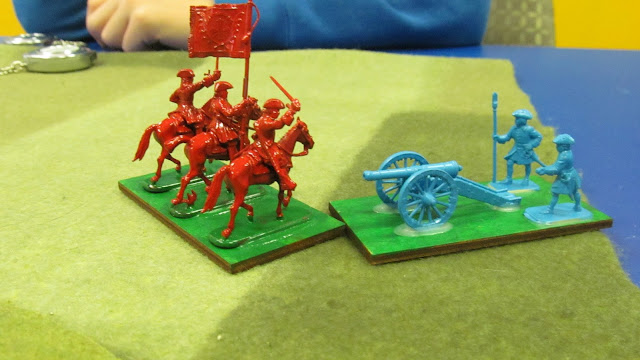 The guns are captured, hauled back to the capitol and presented to the Princess of Redsteinerburg. 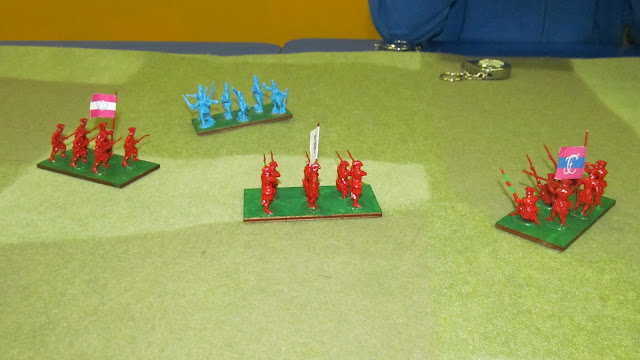 The last stand of the Grenadier Guards.

The first battle of the campaign goes to The Principality of Redsteinerburg.  With the cavalry and infantry of Bluehofen having to react to the losses on the left flank, the envelopment of their rear by the Prince's Horse and the massed musketry of the infantry, they were never in a position where they could establish a good battle line.  With the remnants of the Army of Bluehofen fleeing to the Lahn River, could the war be over?