Happy New Year and may the blessings of the Lord Jesus Christ be with you!

An unexpected Christmas gift was from Honorable Son #1's sister-in-law!  Even though there are only 24 figures to finish the Viking Sea Raider army for Dux Bellorum, they will now take a back seat to some wayward Irishmen in the wilds of Scotland. 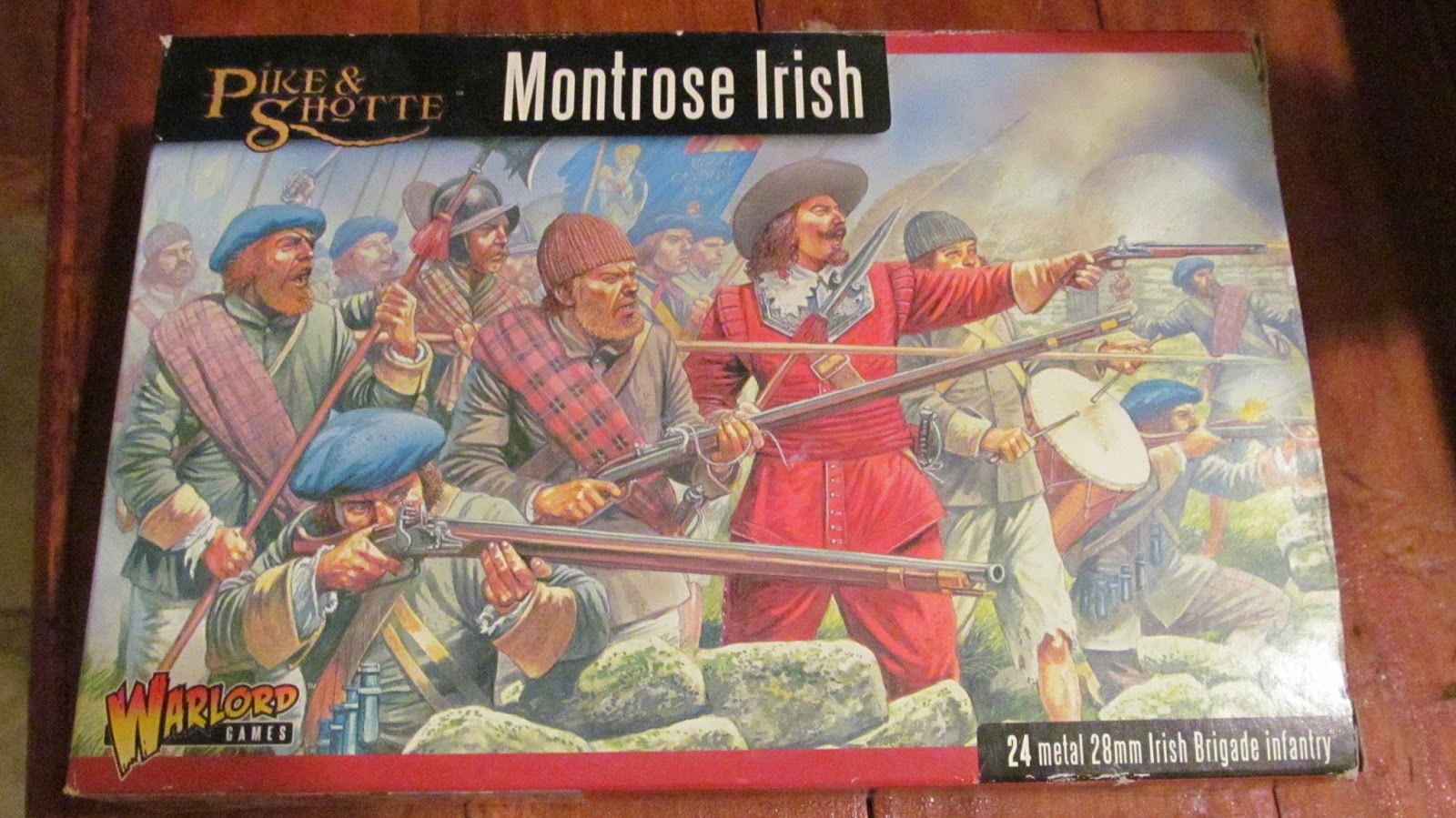 As my English Civil War forces expand, and with a middle name of Campbell, it was inevitable that I include forces from Scotland. In raising my forces I have been following historical orders of battle in picking out units that would be fun or basically look cool on the tabletop battlefield.  With 2 clans of Highlanders complete, what better than to add the Irish Brigade from Montrose's Royal Army in Scotland to provide support.  I know venture forth to build forces that beat the crud out of my ancestors during Montrose's Scottish campaign (more on that later). 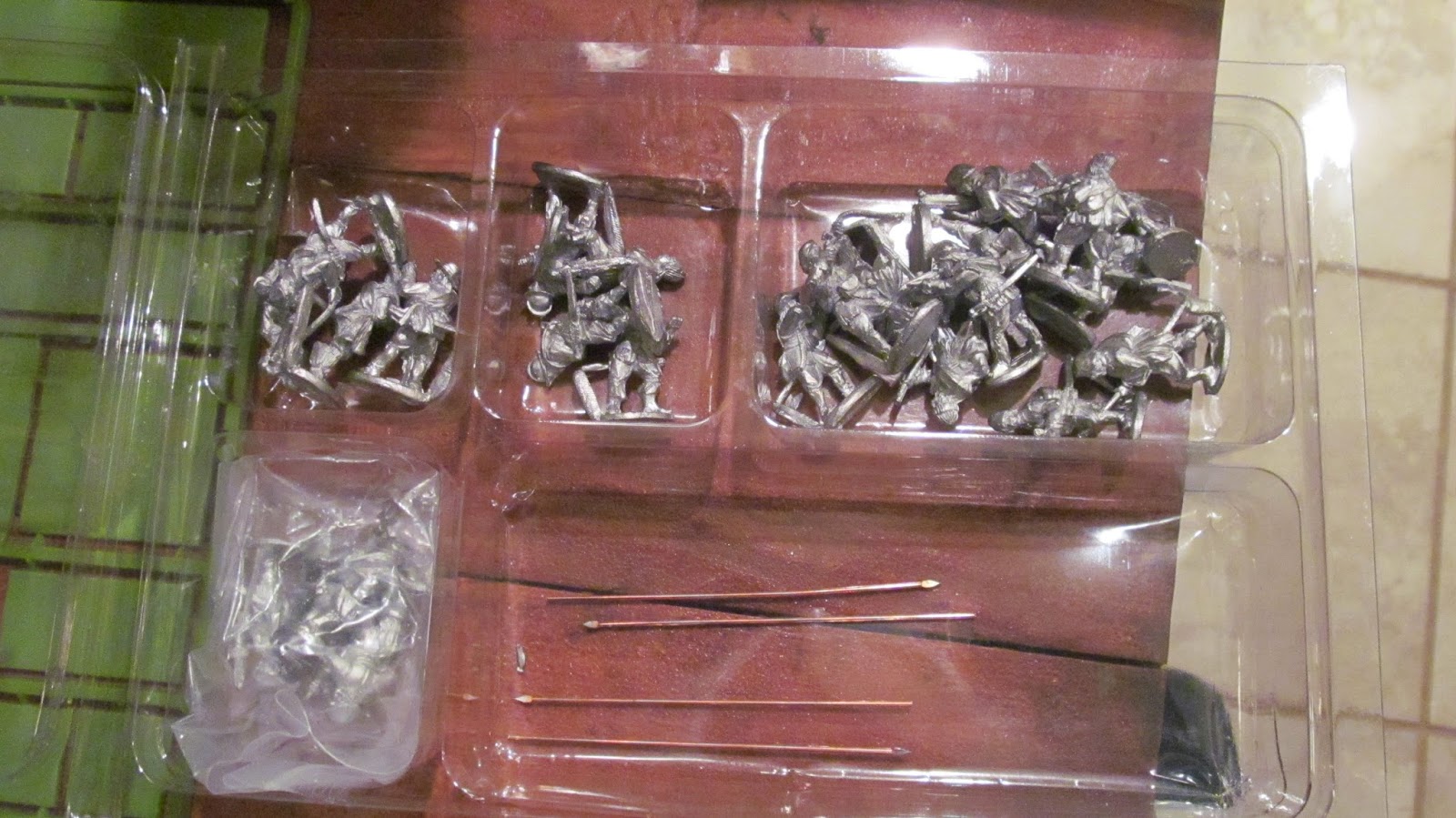 The Montrose Irish boxed set is all metal and comes with 4 command, 4 pike (with pointy sharp metal pikes!), 16 shot and a small pamphlet on the history of the Irish Brigade, painting suggestions, 7 flags and plastic bases. 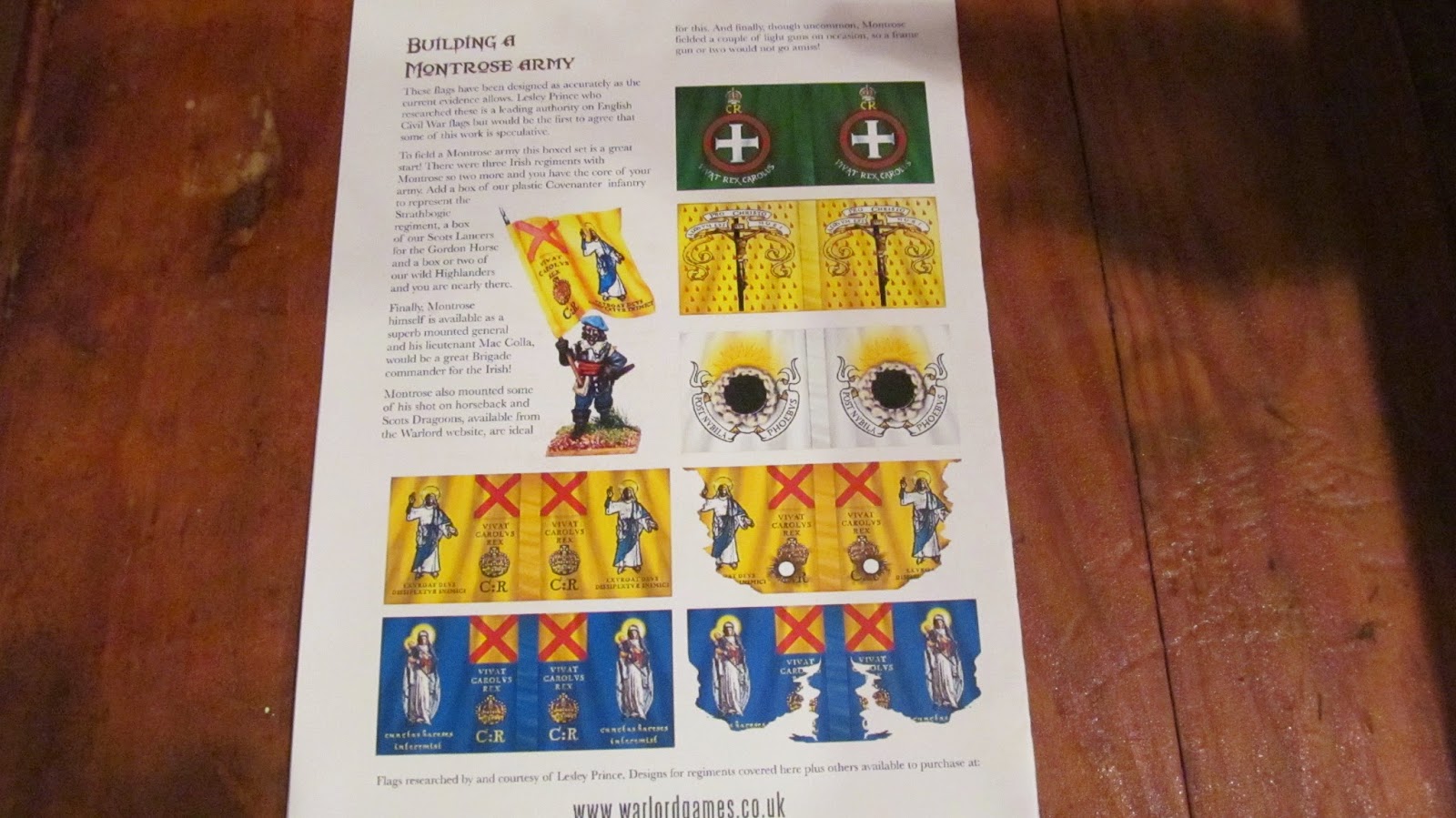 The pike and shot figures are picked randomly from the line and gave me a fine mix for the units I am going to paint. The figures are outstanding, though the Irish Brigade ensign's pole looked like a spaghetti noodle that required careful and patient straightening. Several of the musketeers muskets were also bent but they were easily fixed. Warlord Games did a great job in portraying the unit on campaign; ragged uniforms and bare feet.  The Irish Brigade officer is one of the finest figures I have seen for the English Civil War and the Irish Brigade Sergeant has an eye patch! The musician that came with the box is the Irish Brigade Piper which made me happy as I preferred that to the Irish Brigade Drummer. 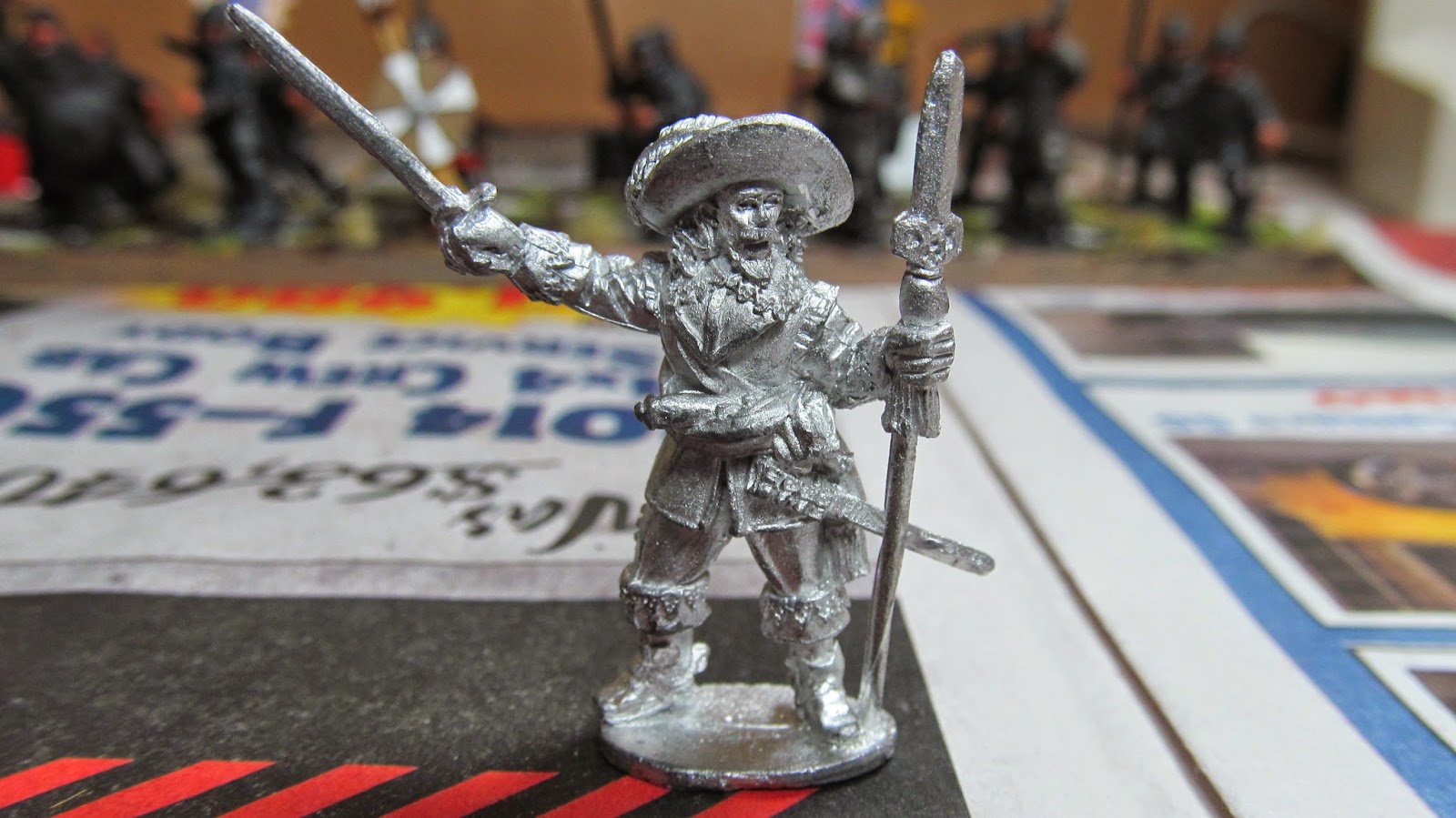 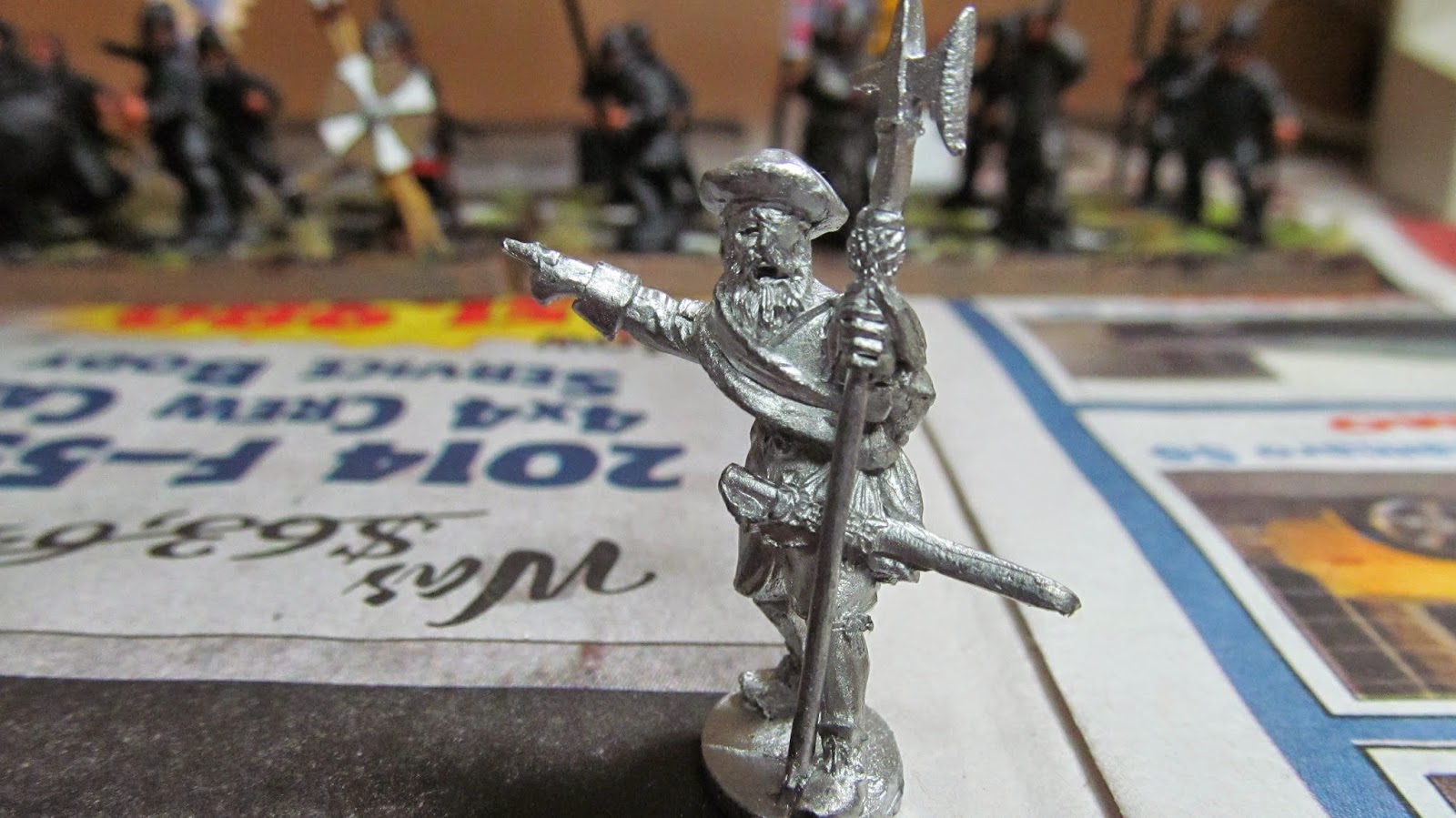 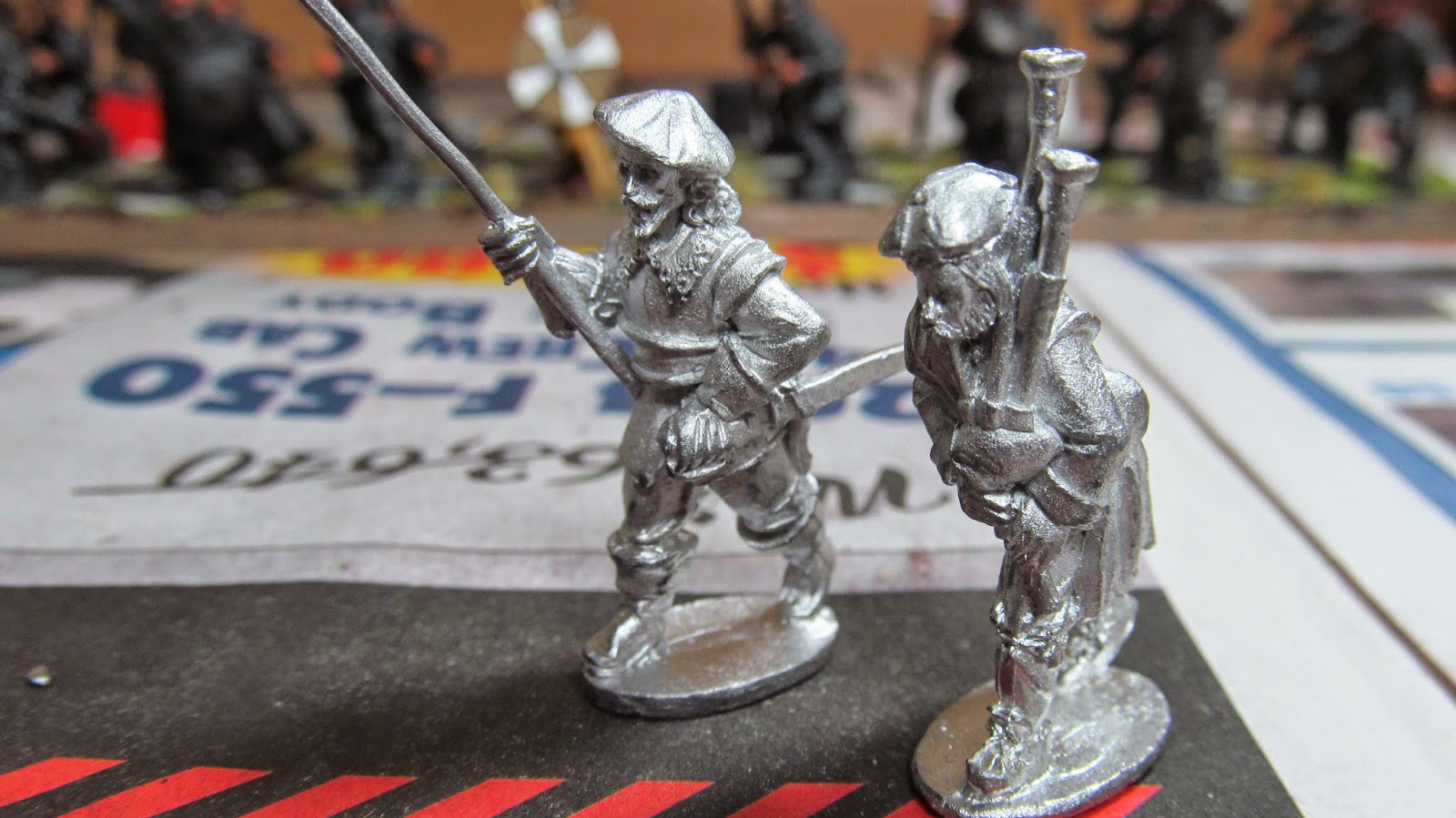 Most of my infantry regiments for Victory Without Quarter have a pike/command stand with 6 figures and 2 stands of shot with 5 figures each. With that breakdown I will have leftover from the box 2 command figures (the sergeant and piper) and 6 shot left.  I am going to use one of the shot that is loading his musket for a reload marker for the unit leaving me 5 shot figures left.  One of the things I love about Warlord Games and Front Rank is the ability to purchase single figures.  To make a second unit I will only need to buy one more ensign (probably the highlander ensign charging for variety), 4 pike and 5 shot.  Not bad!