Rupert, Count Palatine of the Rhine, Duke of Bavaria, 1st Duke of Cumberland, 1st Earl of Holderness is commonly called Prince Rupert of the Rhine.  Born on December 17, 1619 he lived a long and colorful life dieing on November 29, 1682. Throughout his life he was a soldier, admiral, scientist, sportsman, colonial governor and amateur artist during the 17th century. The younger son of the German prince Frederick V, and his wife Elizabeth, the eldest daughter of James I of England. 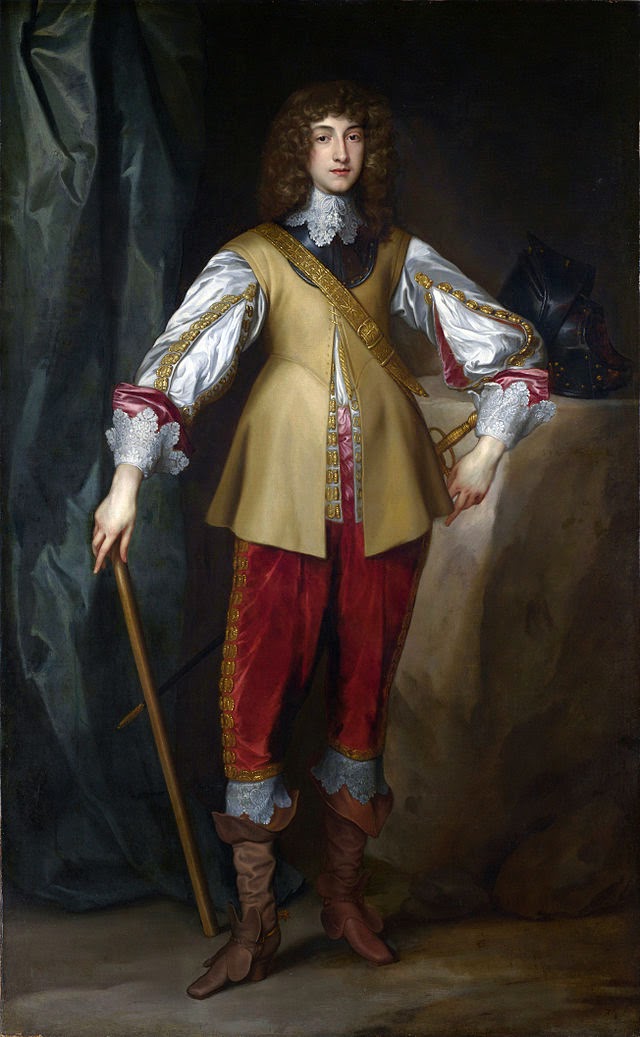 Rupert is the nephew of King Charles I and is a great addition to a Royalist army.  Warlord Games' Prince Rupert also comes with "Boy" or "Boye, his poodle that accompanied him on many a field of battle until becoming a casualty during the Royalist disaster at Marston Moor. 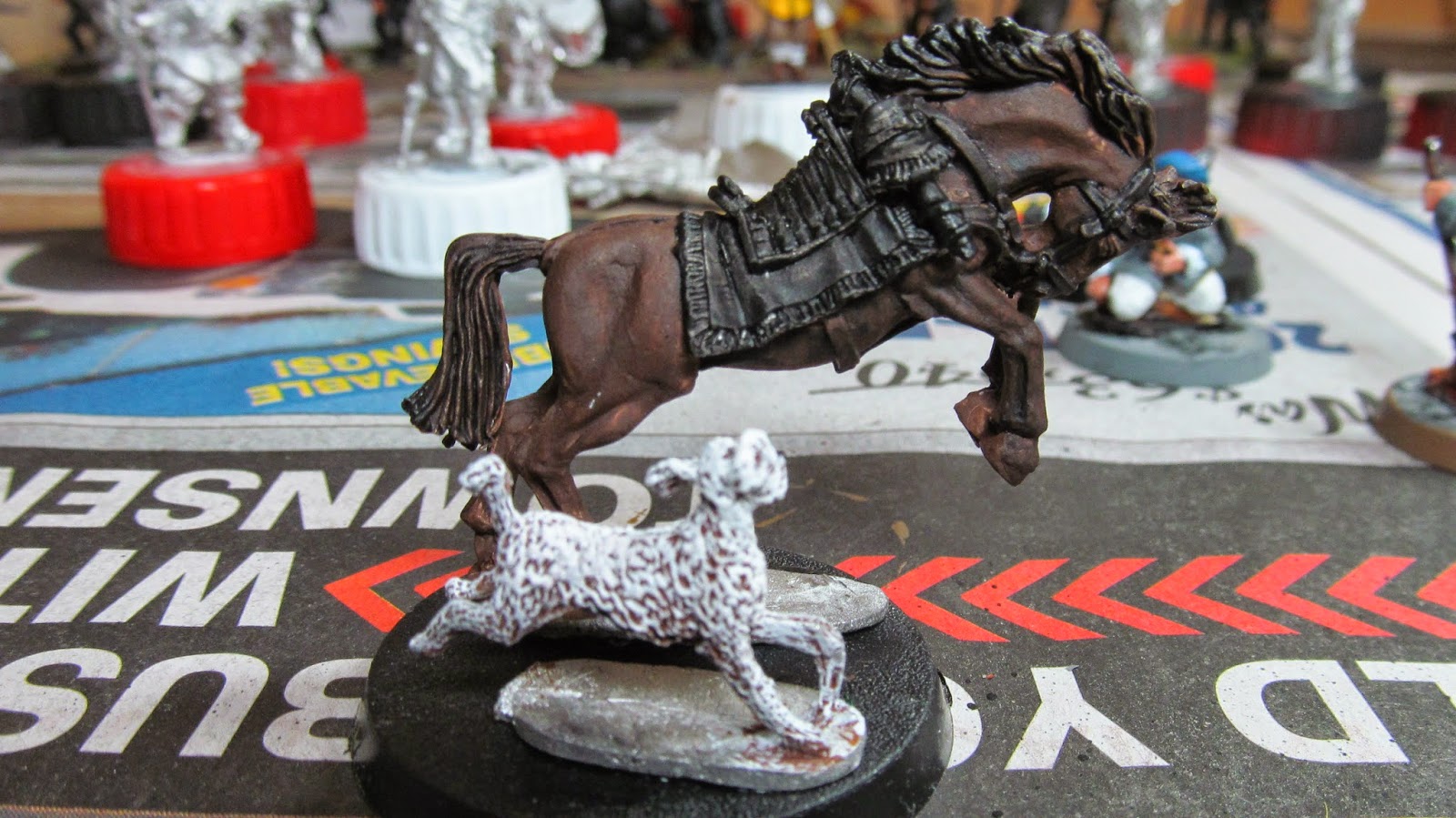 The horse is a wonderful sculpt and the animation is superior in my opinion.  Boye is running next to where Rupert will be and is mounted on a 40 mm round stand representing a brigade commander in Victory Without Quarter. 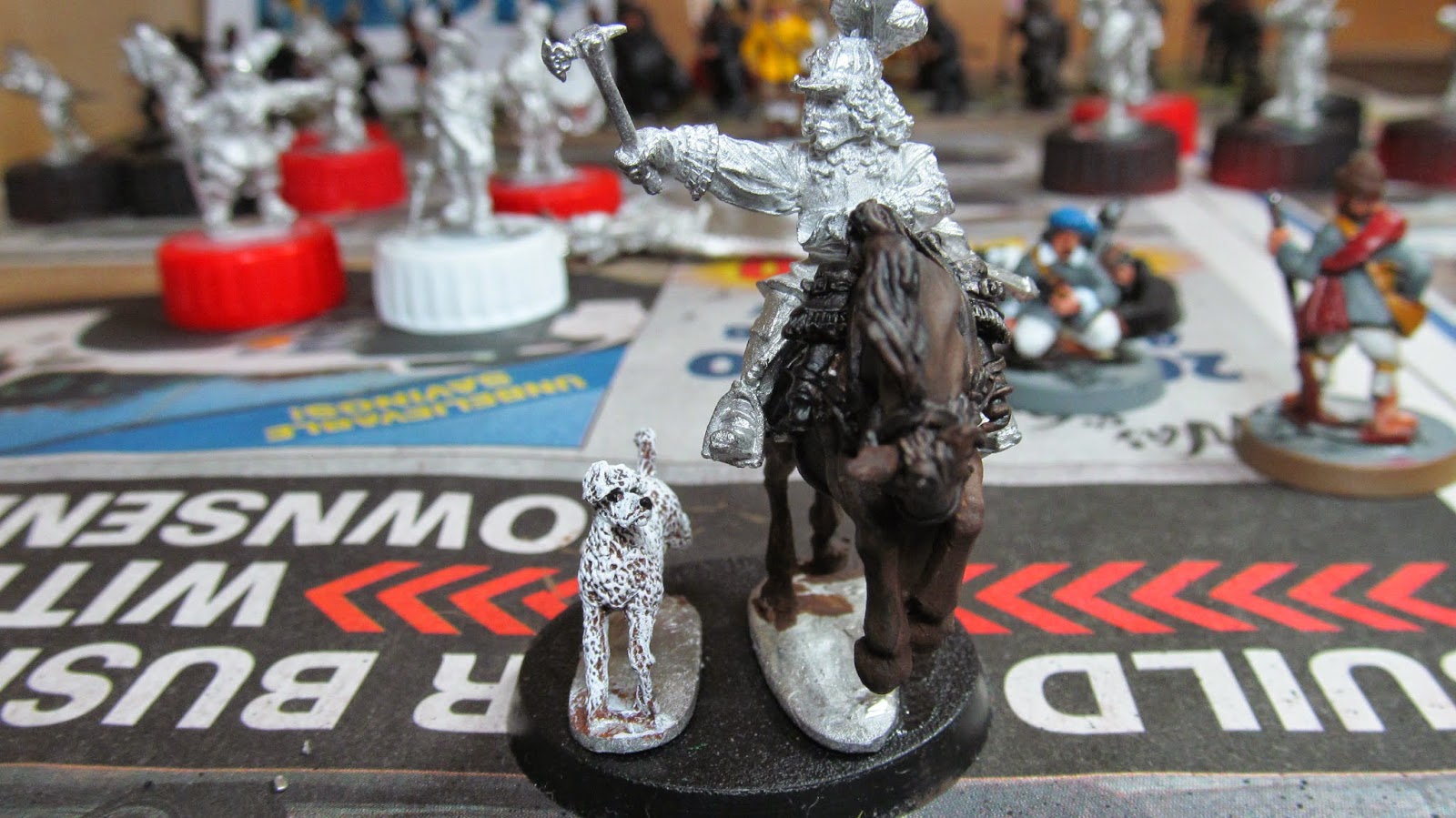 Prince Rupert is not glued yet to his faithful steed yet as I am going to finish painting the horse before adding him. I've been switching to cheaper acrylic paints available at stores like Hobby Lobby. The paints are much cheaper and I'm getting the same results. The horse was primed with black and the base coat is painted with a dark brown called "Burnt Umber." I then applied a black wash over the body and then painted the raised portions of the body with the same dark brown paint. Later I will paint the highlights with a slightly lighter brown. 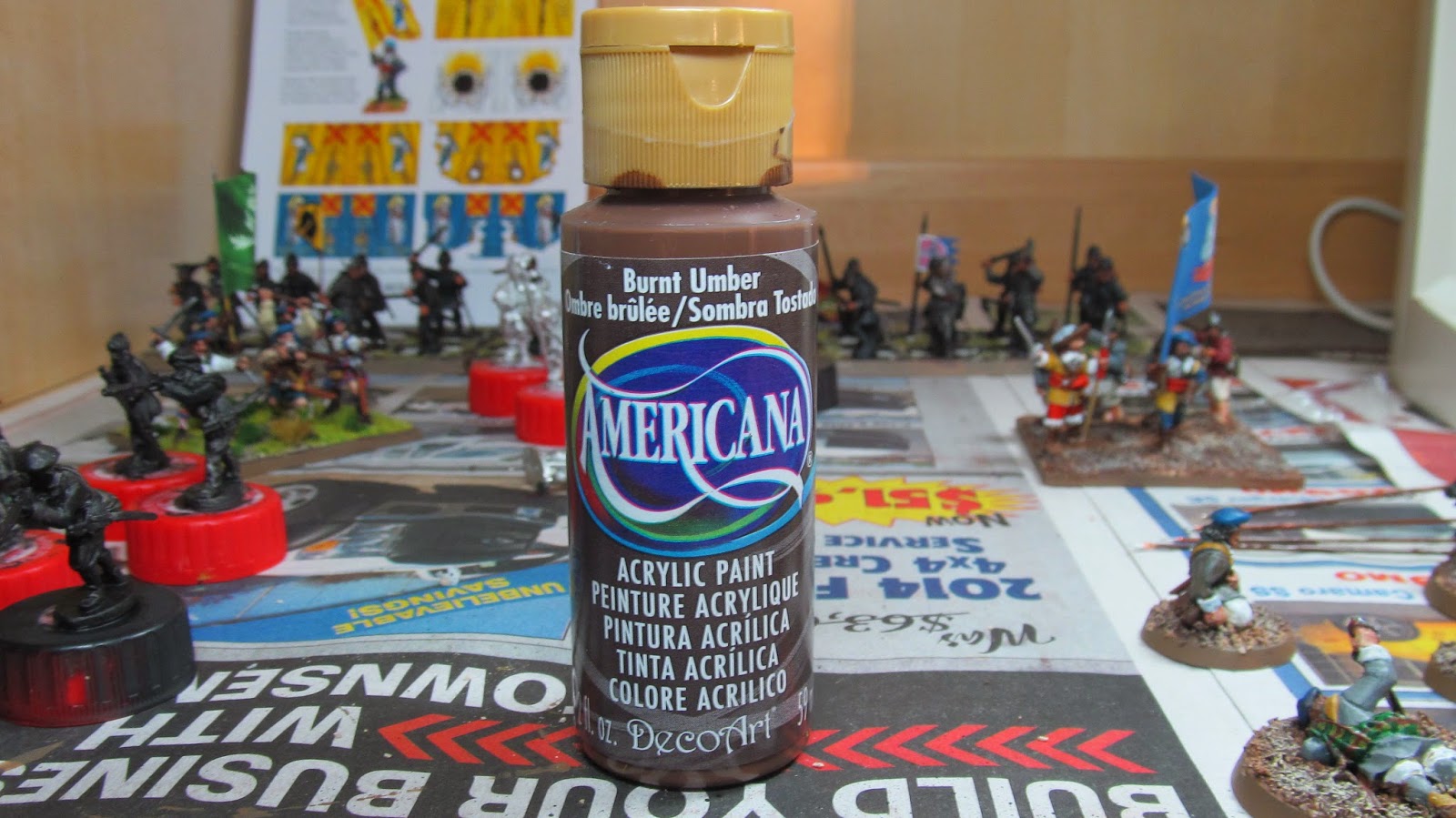 Works just as well for 1/2 the price! 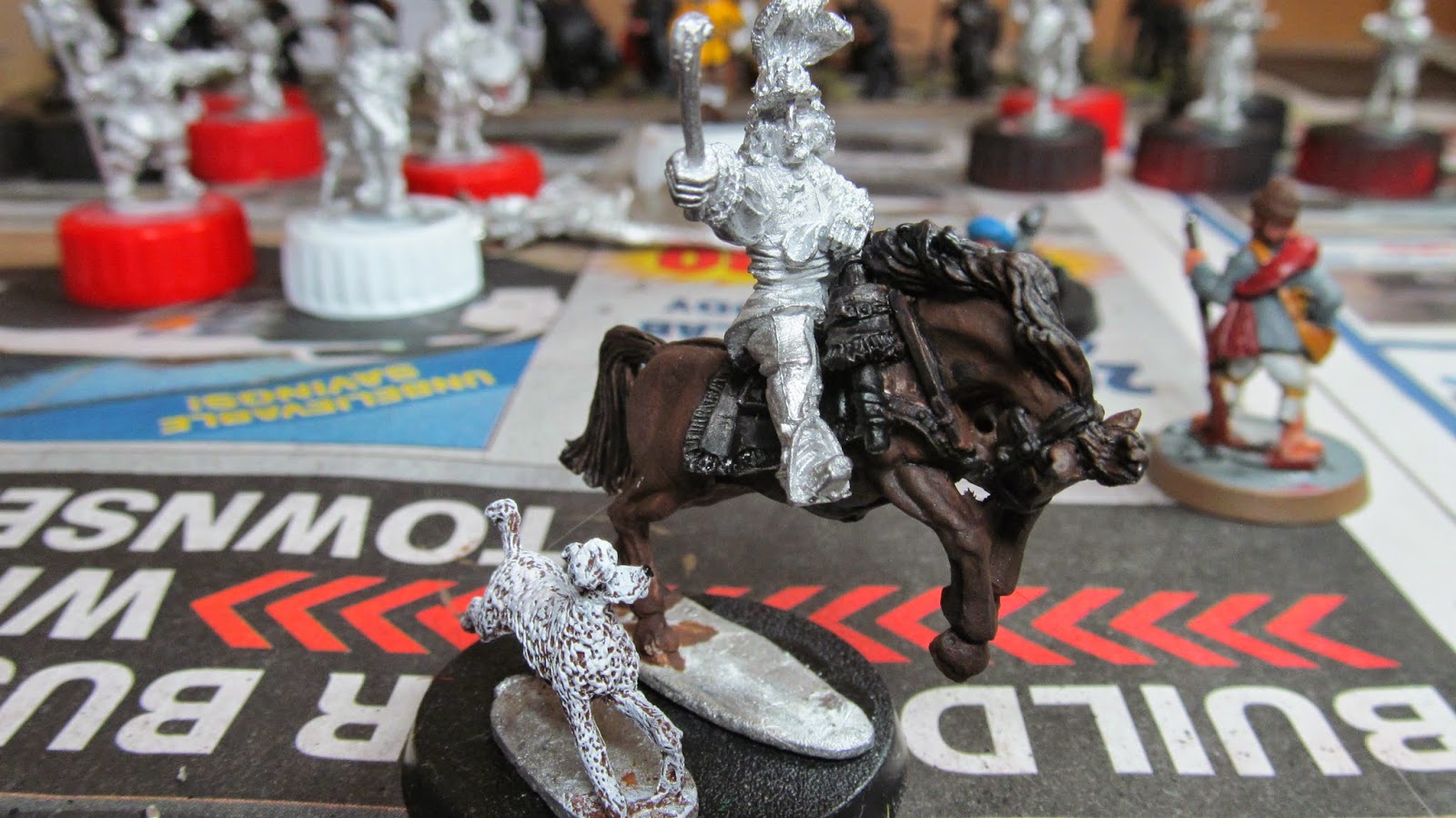 Though not glued yet you can get an idea of what the finished command stand for Prince Rupert will look like. 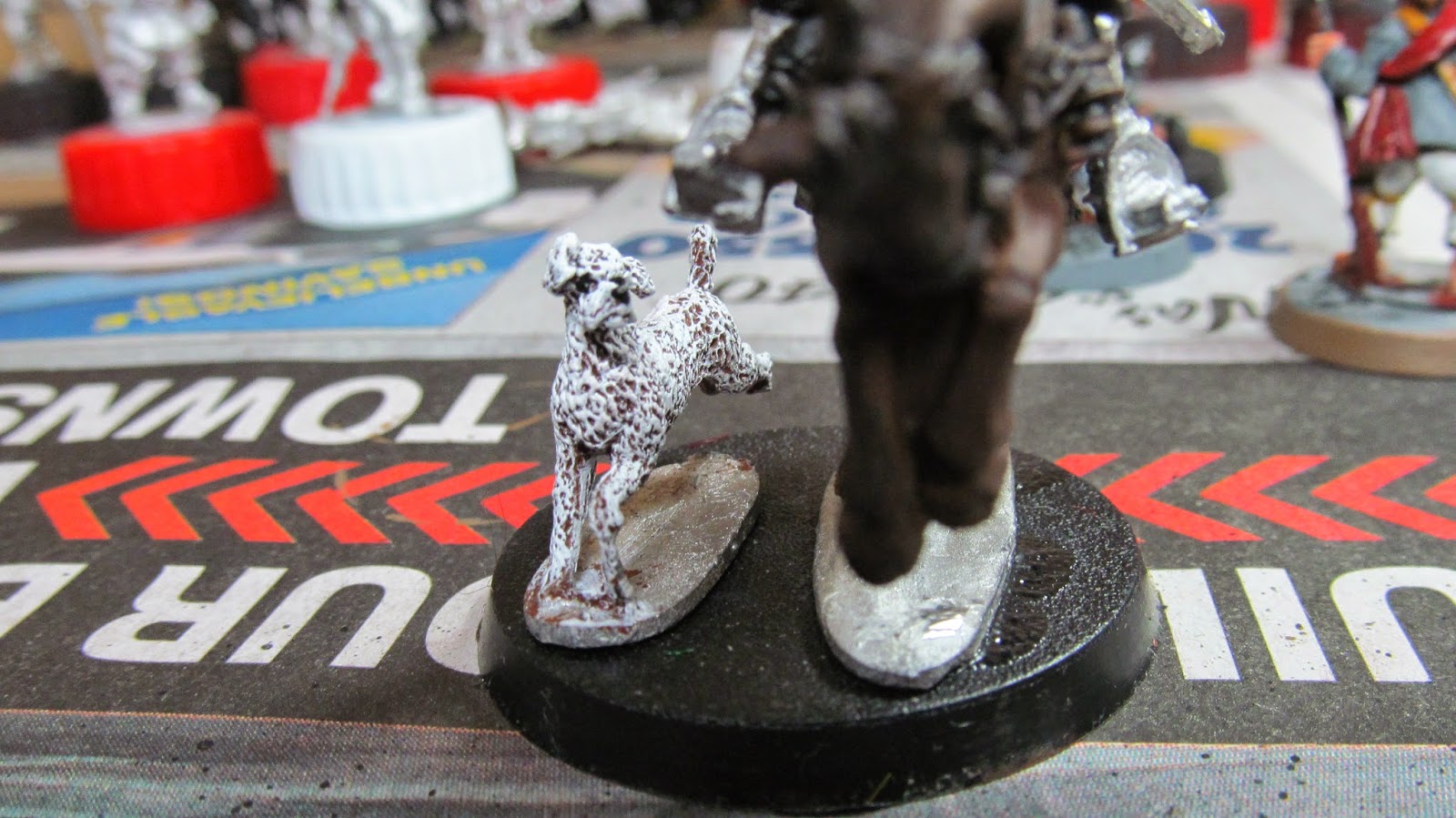 A close up of Boye;  the War Poodle is easy to paint.  Base coat was a medium brown followed by a "thick" wet brushing of Bone White finished with a dry brushing of white.
Posted by Neil at 11:30 PM