For the miniature Napoleonic gamer, what's not to love about the Peninsular Campaign?  On the tabletop you can have French, Poles, Dutch, Swiss, Italians, Spanish, Portuguese, English, Irish, Scots and our Germans vs. their Germans!   The variety of units for gaming both historical and fictional "what ifs" is incredible.  Having said that, time for an update on the opposition to the Empire of France. 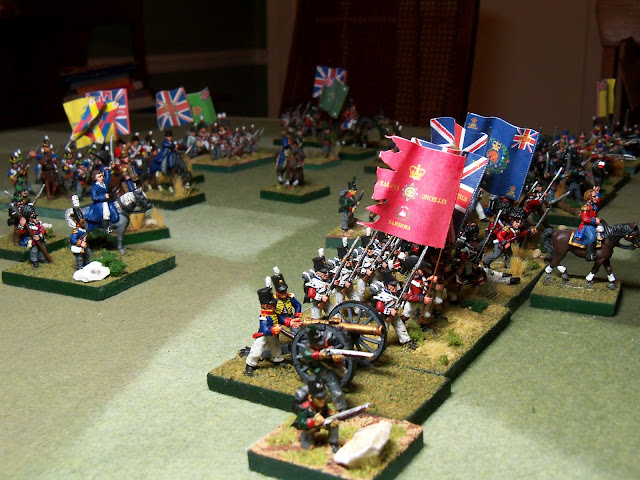 As mentioned previously, I'm doing my forces for the rules Volley and Bayonet.  My first love in gaming was the Napoleonic Wars as I collected Airfix plastic French and British figures in 20mm.  The first game rules we used were Bruce Quarrie's Napoleonic playing rules published by Airfix and later republished in Napoleon's Campaigns in Miniature.

I really like these rules and they were the standard for the longest time that I measured other rules against.  I can remember playing with my brothers and friends on the floor with huge armies all over the place for an entire weekend.  Even though I don't use them for active gaming anymore, they are a wonderful resource for the period and for gaming ideas.

Tried Empire (hated it); playing for 5 hours and only getting 2 turns in was not my idea of fun.  Sometime during my captain years, I toyed with idea of a game systems that would allow large, grand tactical battles to be fought.  I should mention, that during this time I had started to collect Napoleonic armies in 15mm using primarily Essex, Minifigs and Old Glory miniatures.  I tried Napoleon's Battles published by Avalon Hill.  The game was okay, played well but there was something about it that never grabbed me.  So after remounting for Napoleon's battles, I remounted them again for Bruce Quarrie's rules.  Bought Shako, read it and thought . . . mmmm, I don't know.  Then I got on my Late Roman kick, sold the veteran 15mm Napoleonic figures on eBay and financed the Late Roman Empire in the west. 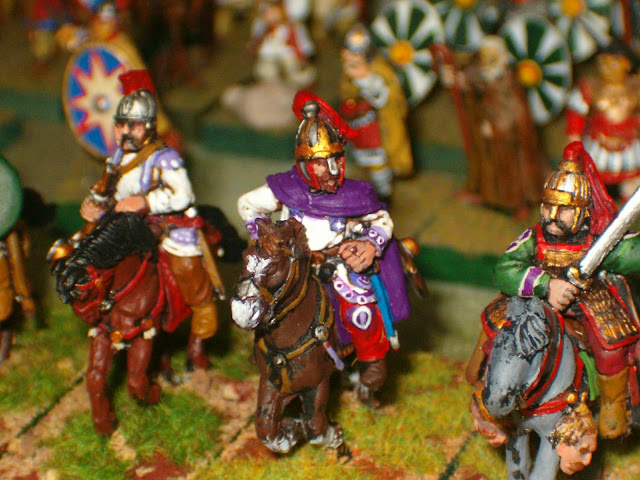 Our period was financed by another period?

But the Napoleonic bug kept coming back, time after time.  I wanted to game the period again, but I wanted to fight big battles that could be done in an evening or afternoon.  Then I discovered Frank Chadwick's Volley and Bayonet.  Wow.  It was everything I was looking for in a big battle, horse and musket game.  Frank's rules were innovative; players didn't worry about tactical formations!  That's the job of battalion and regimental commanders.  We've got an army to run as players!  Units are based on fix stands and depending on the period, are regiments and brigades.  The interaction of "units" fighting is abstract as the focus is on the big battle. I first rebased my War of Spanish Succession troops and played the game.  I loved it! 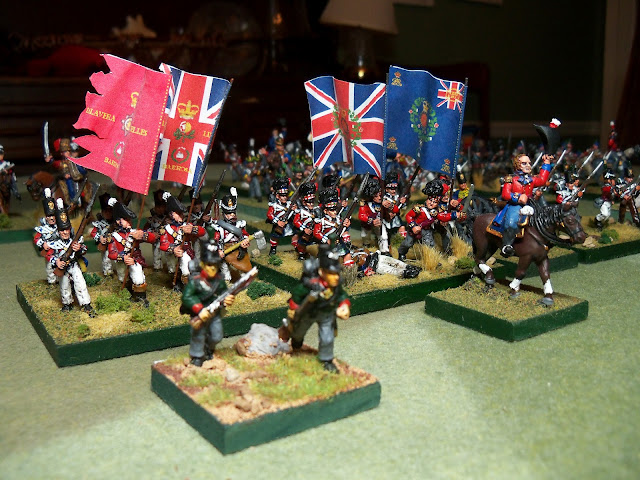 Now for the wars of Napoleon.  Since my experiment with the Late Roman period, I was ready for another challenge in the 25mm to 28mm world.  eBay, along with hard plastic miniatures, has made the project affordable in 28mm.  With the game scale of Volley and Bayonet, the number of figures per unit does not matter, only the size of the base.  With 28mm scale, I can use 8 infantry figures mounted on a 3"x 3" base for an infantry unit as compared to other rules were I would need 12 to 36 figures.  Now I can build some armies and with the variety of units I want. 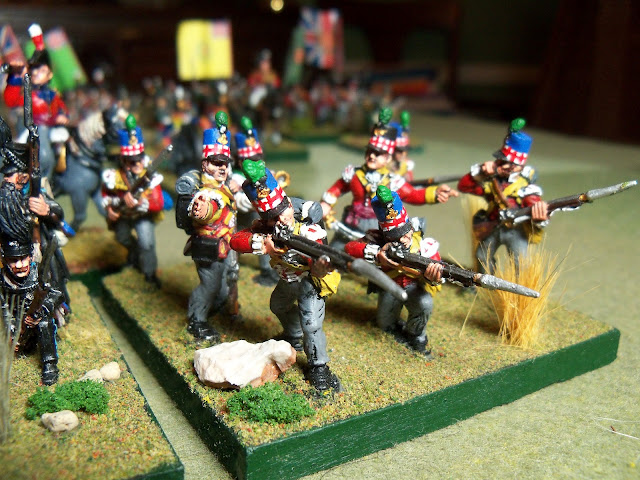 For the British and their allies, I have the following currently painted: 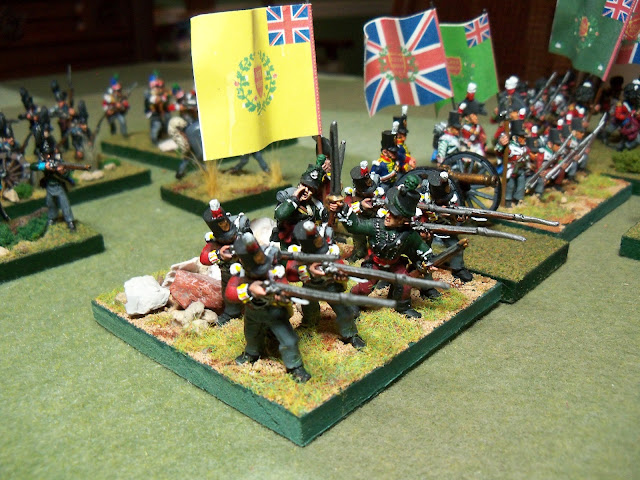 The South Essex.  British Line from Wargames Foundry and the 2 Riflemen from Front Rank.  If you don't know who the South Essex are, shame on you!

When I am finished I should have: 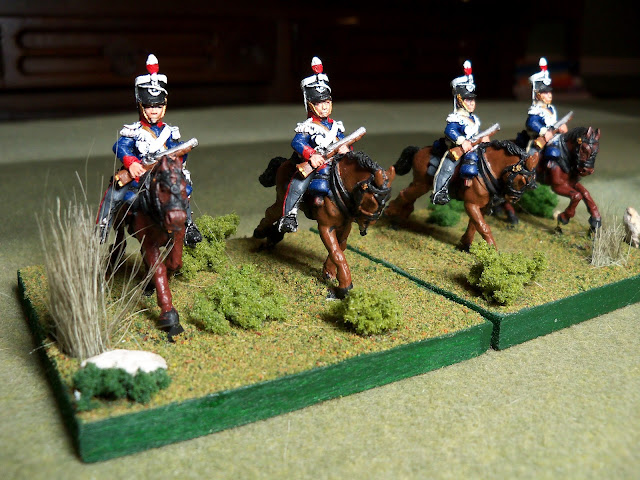 The army is going to be weak in cavalry, so I may add some more later.  Artillery will be the same as the French for now; Brigades will have dedicated guns and the  4 artillery stands will be the "army" artillery to reinforce where needed. 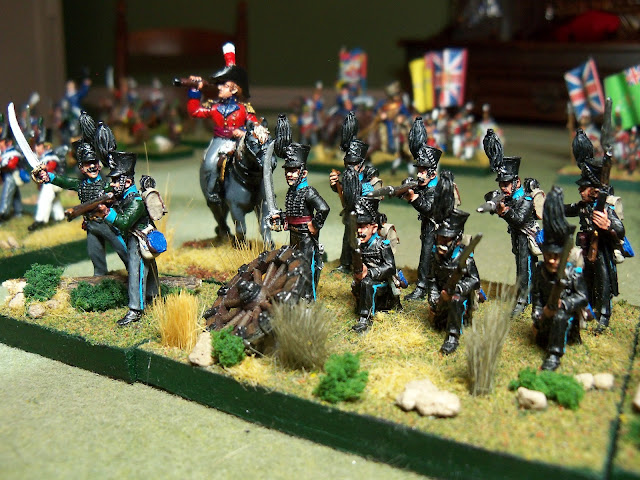 Brunswick Oel Jagers.  Miniatures are from Perry Miniatures and the mounted British officer is from Front Rank Miniatures. 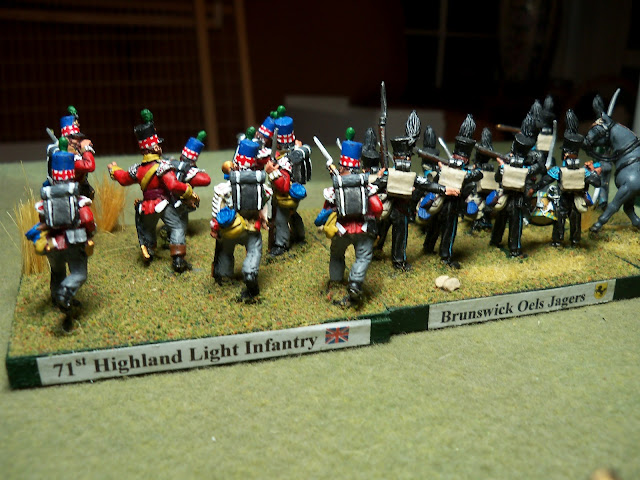 I plan on painting at least 2 more Portuguese Infantry Brigades and possibly a Portuguese Cavalry Brigade. 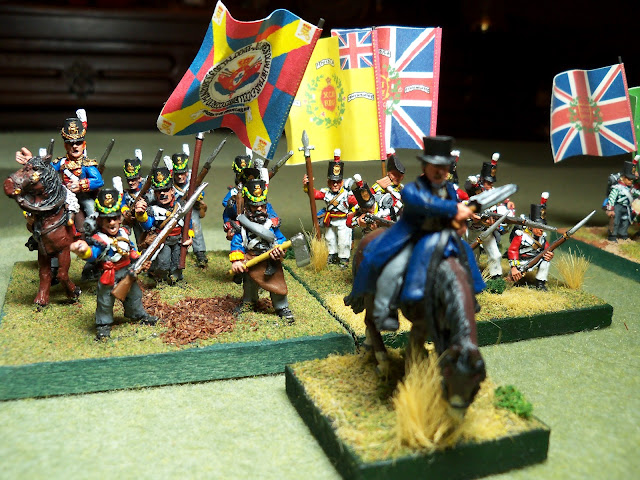 Portuguese in blue on the left.  The figures are actually British Flank Company in Belgic Shako from Wargames Foundry.  I figured they were "close" enough to the Portuguese uniforms in this scale and painted them up!   That's the Connaught Rangers (mainly Irish) representing a British Brigade on the right. 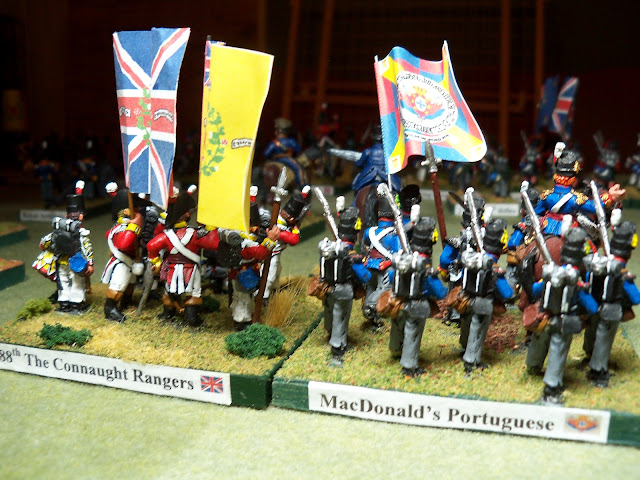 I put labels on the back of the bases for easy identification.

By the way, all flags are from the wonderful site Warflag which are free and downloadable.  I can't think of the last time I bought flags.

I think there is a rule that all British Napoleonic armies have to have more Highlander units than Wellington ever had.  I have painted 3:  The 42nd, the 71st Light and the 79th. 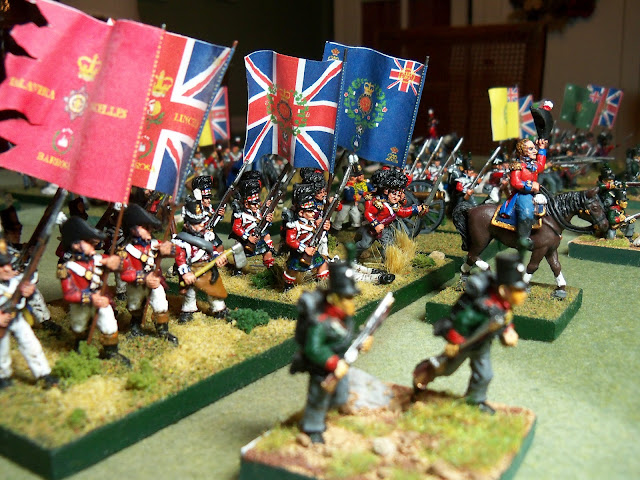 The 42nd Royal Highlanders in the middle.  Guards Brigade to the left and a unit of the 60th Royal Americans (Rifles) in the front. 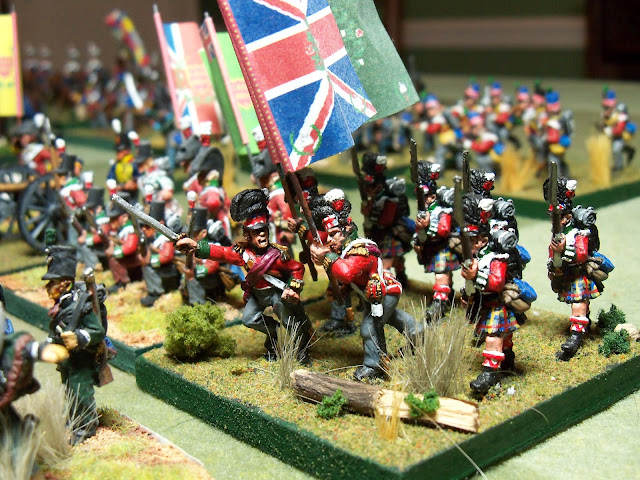 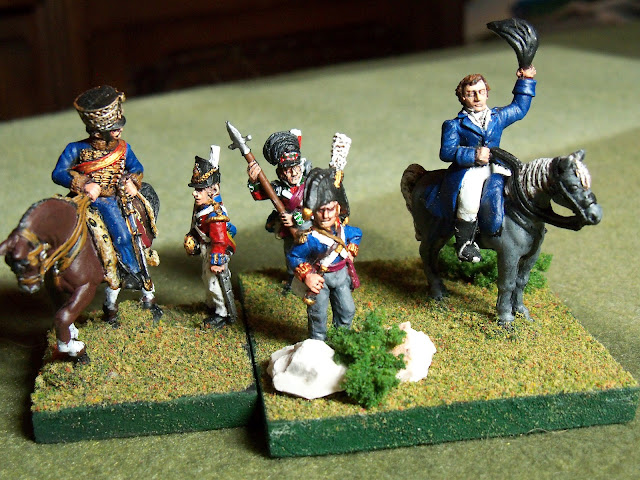 Wellington and Uxbridge figures from Front Rank; the dismounted figures are Wargames Foundry. 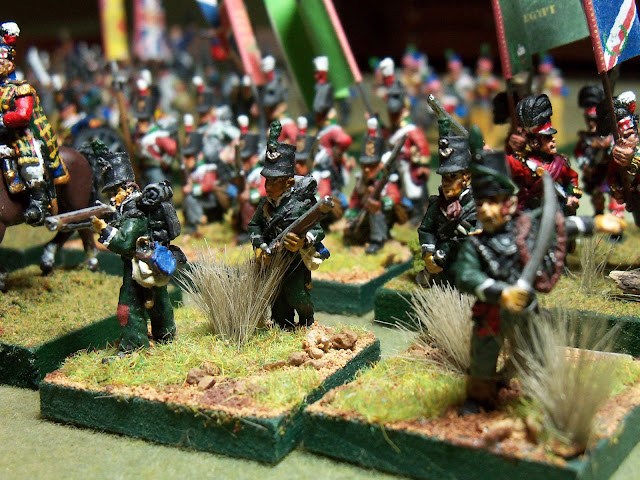 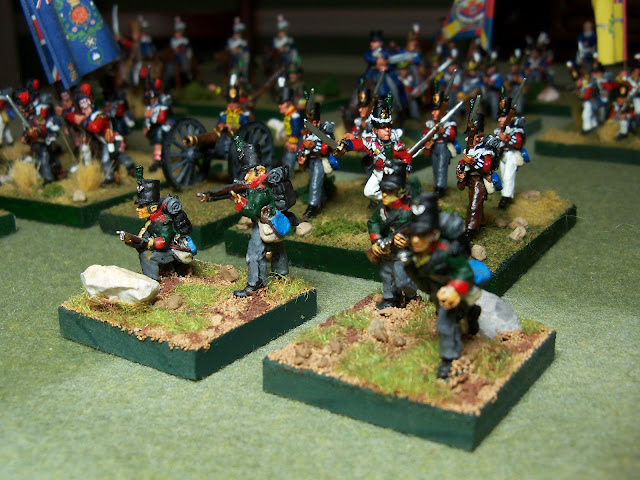 6oth Rifles in front of the King's German Legion.
Posted by Neil at September 01, 2012