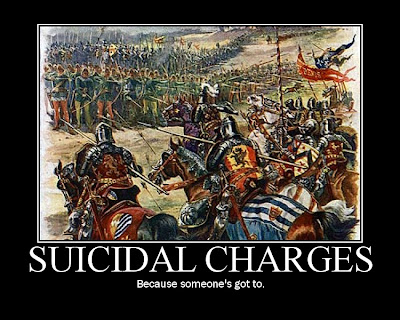 Years ago, I traveled to a convention in Pennsylvania sponsored by HMGS East.  One of the participation games was the Battle of Agincourt and it looked beautiful.  The game was subtitled: Was the long bow that good?  So I approached the game master with two friends to play on the side of the French.

Me: Those are great figures. We'll sign up to play the French and see if we can beat the English this time.

Me: We've got some ideas on the French attack and how they should be organized.

Game master: We are going to use the historical organization.

Me: Not a problem.  Here is a sketch on how we are going to deploy and when we will launch our attacks.

Game master: You have to deploy just like the actual battle and attack with their units when they did.

Game master:  To beat the English.

Me: We can't use some of the alternative plans that were discussed at the council of war the night before?

Me: Can we use some of the other historical tactics of the period?

Me: Do we get points if we capture someone or not die as much?

Me: (Paused as I looked at the cool figures ) So why play the French in this game?

Game master: Well . . . the purpose of the game is to show the superiority of the long bow.

Me:  Didn't the dead French knights in the actual battle prove that?

Game master:  Some historians believed that if the French deployed differently they could have won.

Me:  Exactly!  Here is a sketch on how we are going to deploy and when we will launch our attacks.

Anyway we played the game as designed.  I charged with the flower of chivalry right up the middle and got massacred.  Quickest participation game ever.  I'm going to think about ideas about some ideas on designing historical scenarios to be "games" which gives each player a chance to "win."

I had an extra figure left over from when I had painted the Royal Horse Artillery (RHA) for my British Peninsular army for Volley and Bayonet.  The figure is an officer of the RHA from Front Rank and it is a beauty: one of the best sculpted and animated figures I have seen in a while.  The level of detail is great making it an easy figure to paint.  I remembered in an old Osprey book, Wellington's Generals that there was a color plate with General Craufurd and an officer of the RHA.  I also had an extra Wargames Foundry British officer and with just a little conversion work it is now a general officer which will represent General Craufurd (or any other division commander) for the British army. 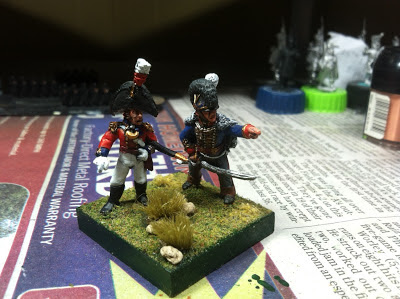 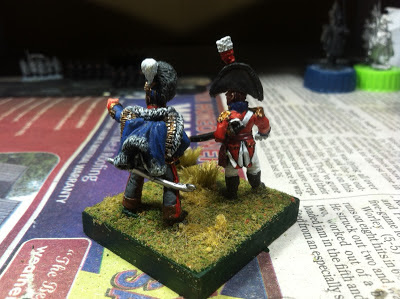 In addition, I have officially declared a Napoleonic burn-out.  Even though I have started the Perry Miniatures below as members of the 9th Legere, I need a break from Napoleonic figures.  Now the question is, what will I paint next until I'm ready to get back to the Peninsular project? 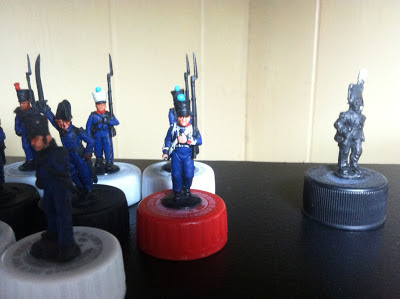