It's amazing how quickly you can paint without stitches in your hand.  I am almost done with Samuel Jones' Regiment of Foot.  All I need to do is finish the bases. 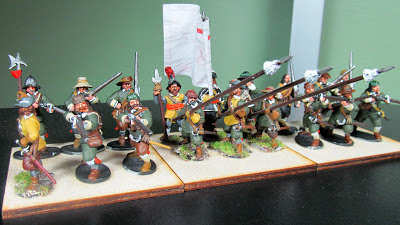 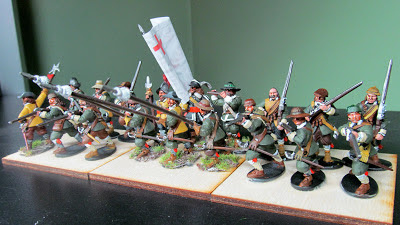 Next up will be the King's Lifeguard of Foot.  Why them you ask?  Mainly because they have cool flags. 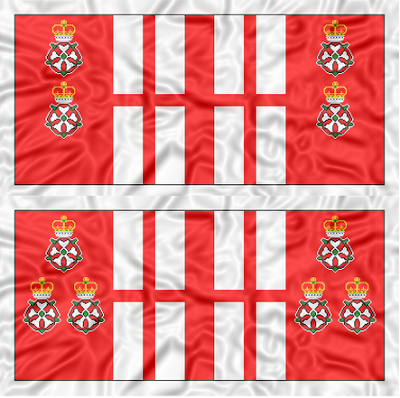 They are going to be more heavily armored for show so I decided to paint a test figure that is almost finished.  Experimenting with a quick paint style of block painting and washes.  I just need to do the highlights and the figure will be finished.  Based on how quickly this figure went, I think it won't be long until the King's Lifeguard will be mustered in Oxford. 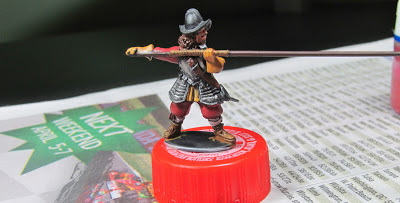 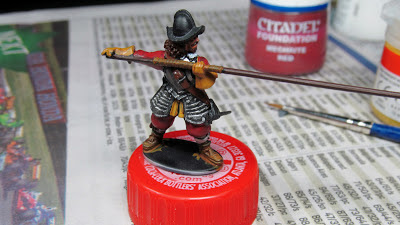 Next up are two officers; the mounted by Perry Miniatures and the dismounted chap from Wargames Foundry (though I believe sculpted by the Perry's).  The mounted officer will be a brigade commander and I'm thinking that the other officer will command the King's Lifeguard. 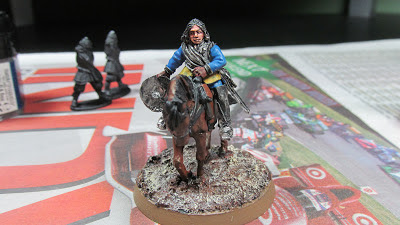 I mounted the horse on the base first and did the terrain using a pumice resin mix.  All it needs is some static grass.  I will be taking more time with this figure but decided also to block paint and use washes.  I first primed the figures with watered down Chaos Black from Games Workshop; it was essentially a thick black wash which really helps bring out the detail for painting. 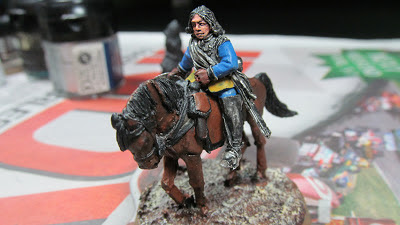 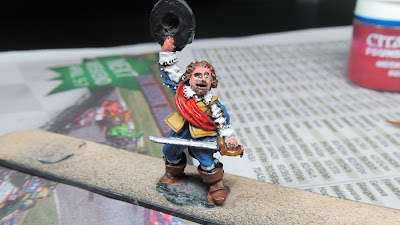 The same technique was used for the dismounted officer and I am really pleased with the results.  I usually take more time to paint the officers and "specialty" figures to make them really stand out.  For the rank and file . . . well, that's the life of the poor enlisted blighters. 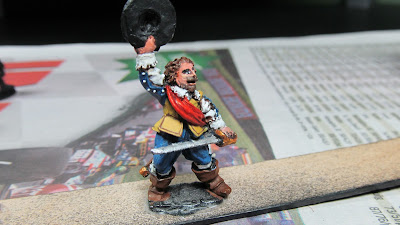 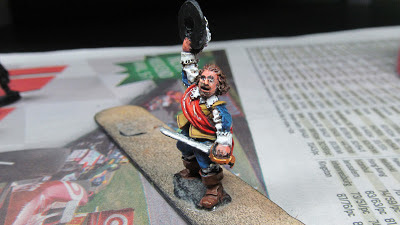 One of the aspects of the hobby I really enjoy is researching and reading about the periods I am gaming.  I enjoy reading about the conflicts, researching flags and uniforms and trying to understand the major themes and personalities.  So it is not surprising that I am brushing up on my knowledge of the English Civil War.  I recently downloaded on my Nook Stuart Reid's All the King's Armies:  A Military History of the English Civil War 1642-1651. 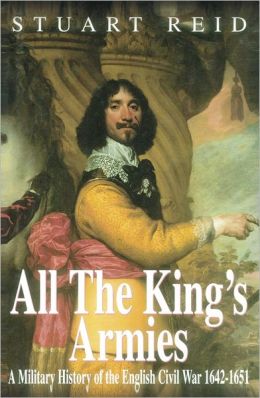 I've been a fan of Stuart Reid's books for years; well researched, concisely written and for gamers his books are great resources for scenarios, uniforms and loads of fun.  All the King's Armies is no exception.  In fact, in reading the superb descriptions of ECW skirmishes and battles it suddenly dawned on me after reading 144 pages of the 321:  I'm going to need a whole bunch more hedges on the tabletop.  In fact, I'm starting to think that the number one piece of influential terrain during many if not most of these battles is the hedge.  Here is a small sample after doing a word search on my Nook for hedges:

. . . while the Royalist front line was in the distant hedgerow.  p. 8

. . . battle began as a firefight along the line of hedge and ditch separating the Marquis of Newcastle's Royalists . . . p. 24

The hedges lining the lane were consequently stuffed full of Royalist dragoons . . . p. 35

Washington and Grey were to be employed in clearing the hedges to their immediate front . . . p. 38

And on and on and on.  The above is only a small sample and I have checked some other references.  I'm going to need some more hedges. 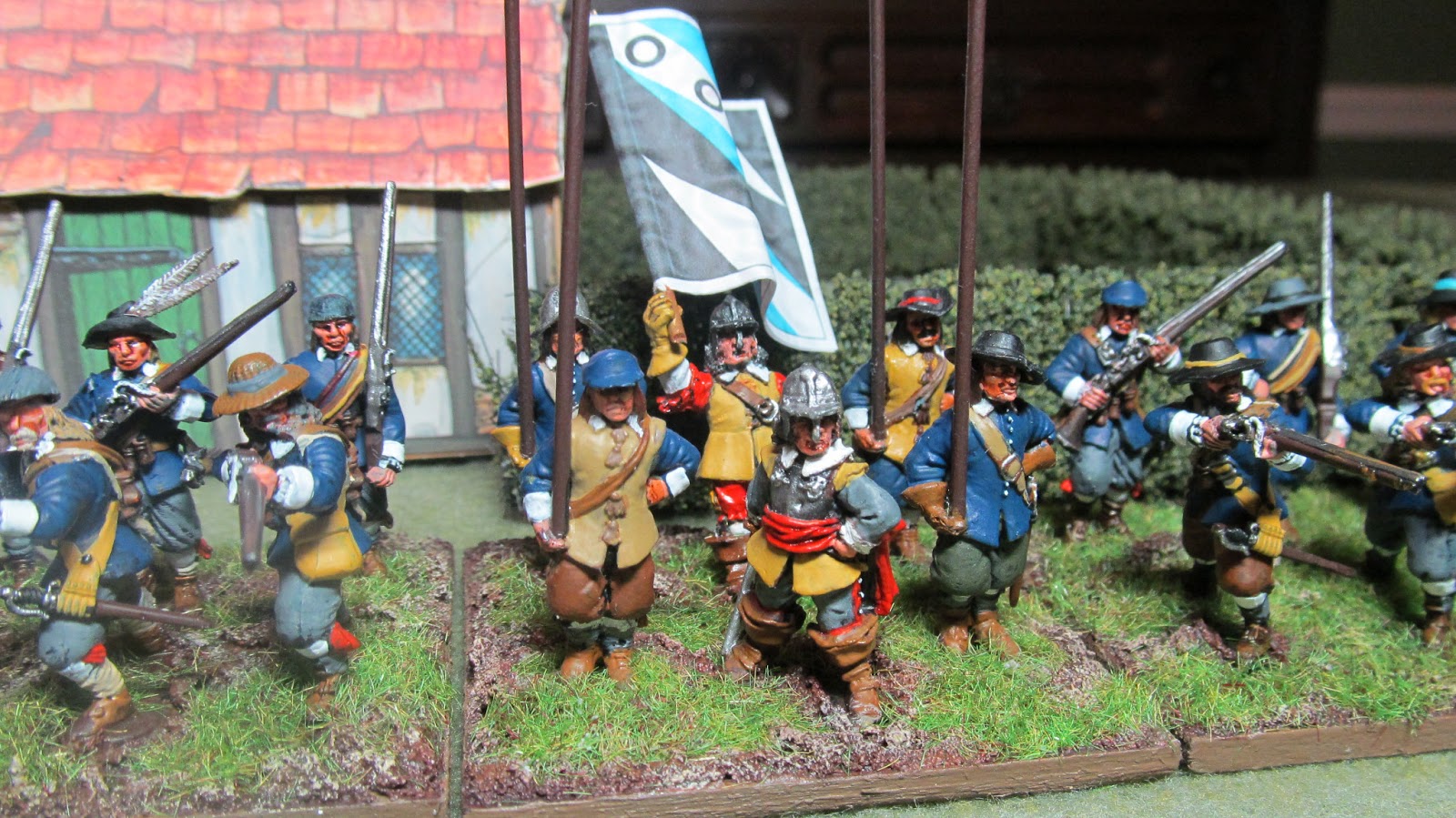 In the background are the 3 hedges I own from Games Workshop
A couple days after I came to this revelation, I was surfing the blogs I follow and came upon a post from Lonely Gamers:  A Wednesday Night - English Civil War.  This is what it should look like - look at those hedges!   And the figures are pretty darn good too!

Time to build or buy hedges before I finish and deploy my troops on the tabletop.