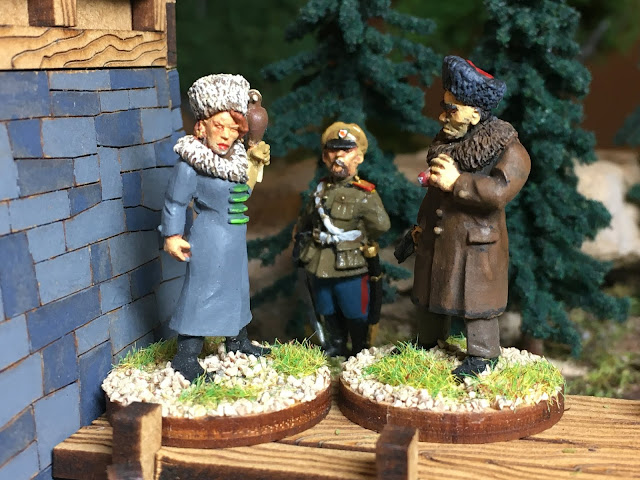 "Your most Supreme Highness, my master, the monk Rasputin, advises that a 'politically reliable' unit be sent to the 2nd Siberian Corps."
The Izmaylovsky Regiment (Изма́йловский лейб-гва́рдии полк) is one of the oldest regiments of the Imperial Russian Army and will add some needed umph for my Russia Field Force for The Men Who Would be Kings. It is part of the 1st Guards Infantry Division of the Imperial Russian Guard. It was formed in Moscow on 22 September 1730 as Empress Anna's personal life guards (leib guard), named after the Romanov ancestral estate of Izmaylovo. 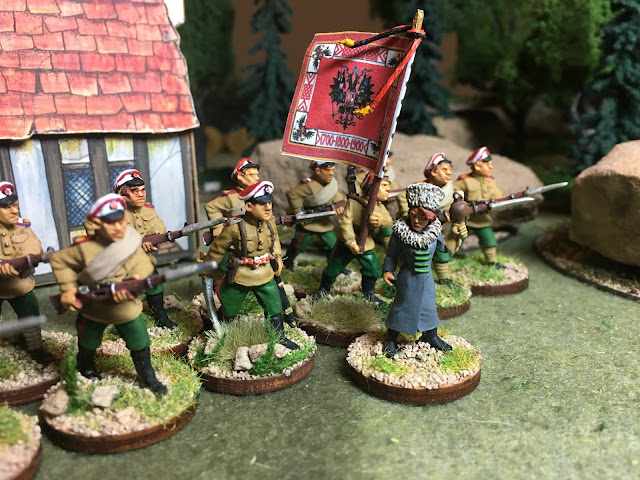 The first colonel of the regiment that was appointed was Adjutant general Count Karl Gustav von Löwenwolde. After him, only members of the imperial family were appointed chiefs of the regiment. 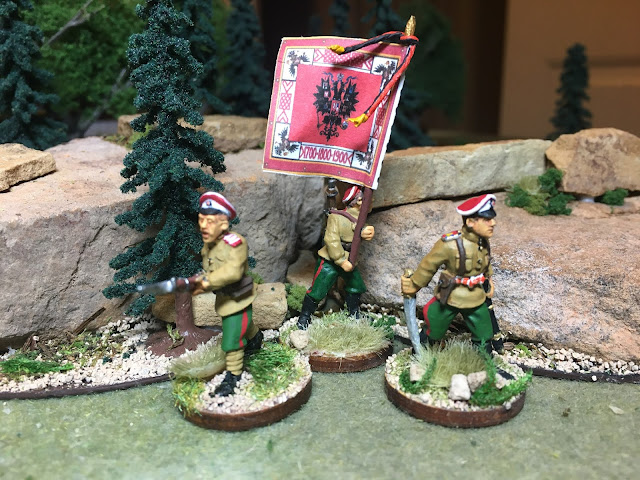 The flag I did for the Izmaylovsky Guard Regiment is speculative on my part based on written descriptions. I was unable to find a picture or surviving example of what the flag looked like.
Throughout its history under the Russian Empire, the regiment wore the standard uniform of the Infantry of the Imperial Guard, which from 1683 to 1914 was predominantly of a dark green (eventually verging on black) colour. The main distinctions of the Izmaylovsky Regiment were the red facings (cap, cuffs and shoulder straps) edged in white piping. Collars were of the same dark green as the tunic; piped in red and worn with distinctive regimental patterns of braid. In addition, the tsar's monogram appeared on the soldiers' shoulder straps and officers' epaulettes. 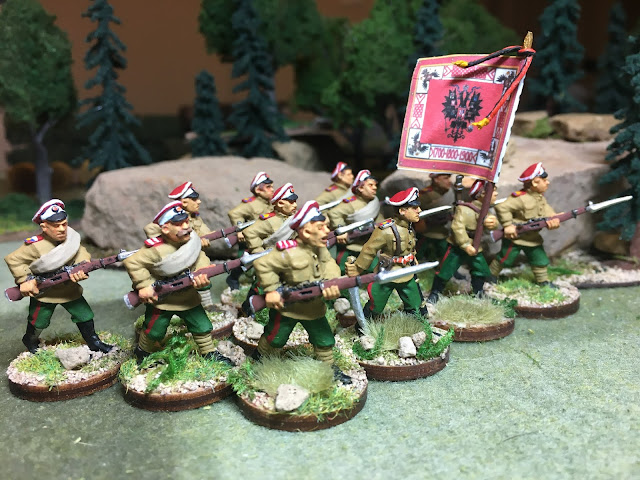 A peculiarity of the Russian Imperial Guard was that recruits for most regiments were required to meet certain criteria of physical appearance, in order to provide a standardized appearance on parade. This tradition was taken so seriously that during the 19th century the tsar himself might make the selection from a line of new recruits, chalking the regimental initial on the coat of each recruit. For the Izmaylovsky Regiment conscripts were selected on the basis of their hair color (brown), and beards (for the first company of each battalion only). 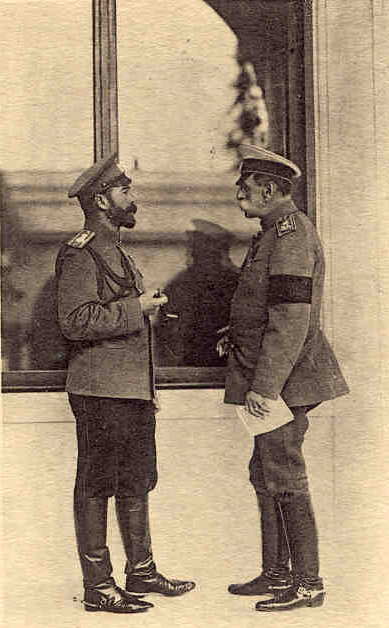 HM Emperor Nicholas II in conversation with Count W. de Freedericksz, Captain-in-Chief of the 4th Squadron of the Horse Guards at Livadia, Crimea. Note the Cap that Count de Freedericksz is wearing - the Izmaylovsky cap is described the same except red with white piping. 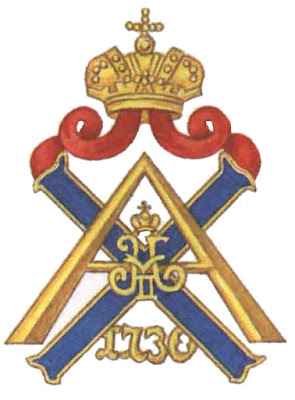 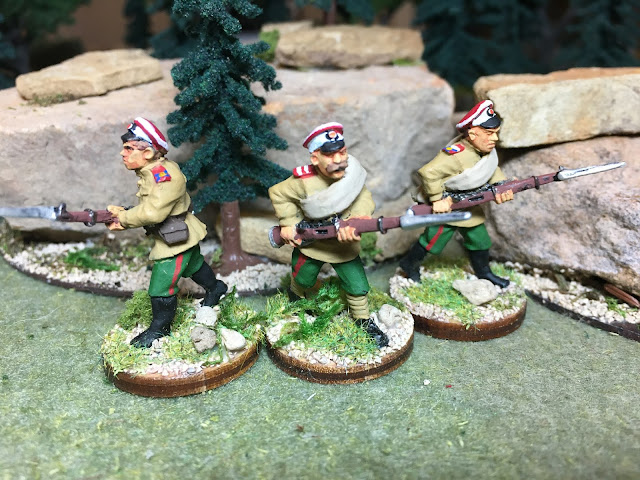 I did just a basic kinda, sorta blob for the Tsar's monogram on the shoulder straps. My corporal and sergeant did not get the monogram as I thought that would look too muddled. That's the corporal in the middle. 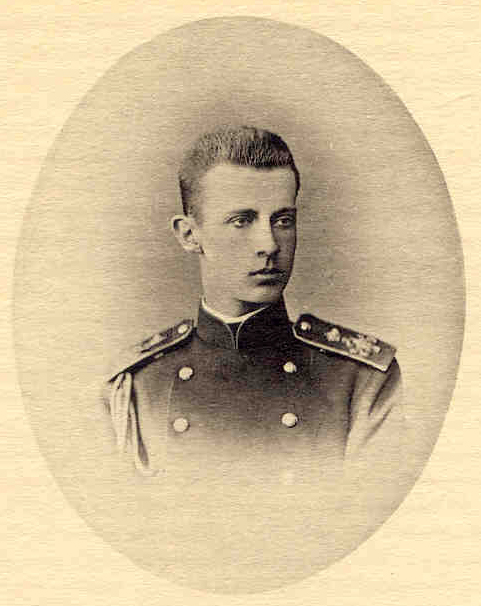 Example of the monogram on HIH Grand Duke Dmitri of Russia, of the Horse Guards. He was murdered by the Bolsheviks in 1918 and this photograph was taken in 1881. My painting of the monogram is a bit more simplistic! 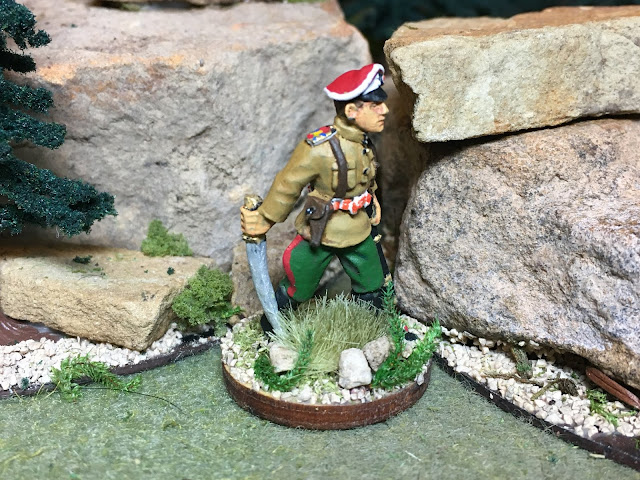 The officer wears the sash-style braid belt in the Romanov colors of silver with orange and black. Instead of silver, I used white which looks better at gaming distance and honestly didn't notice that I forgot to put the black on the belt until I uploaded this picture. It will be an easy fix. The white braid on the red cap shows that the regiment is part of the Tsar's personnel suite. He carries the M1881 officers' sabre.

For the Izmaylovsky Regiment I used White Russian Infantry and a White Russian officer from Copplestone Castings. In addition, I used a Bolshevik standard bearer from the same range which requires a little bit of trimming to turn the star on the cap to an oval to make a complete 12 figure unit for TMWWBK. 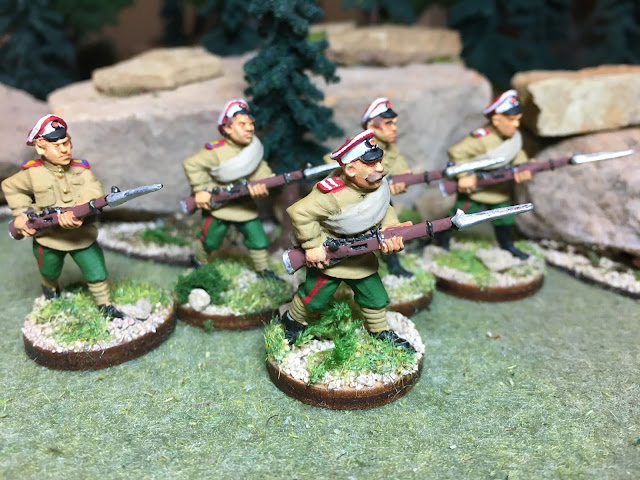 I love the figure I choose to be the corporal; he has the look of a long term NCO. Some of the men have the greatcoat rolled and they carry the M1891 Mosin-Nagant rifle.

A note on the colors I used. For my entire Imperial Russian Army I started with the really dark green for the pants which at gaming distance almost looks black. Historically accurate but Ugggh. I made a conscious decision to lighten the color of the pants to just Vallejo Flat green with a little dark shading. To me it's more aesthetically pleasing and what the heck, I paid for the figures. 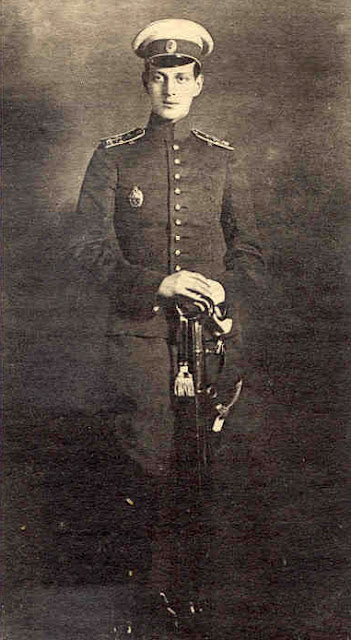 Another photograph of HIH Grand Duke Dmitri of Russia.
Their field uniform is similar to what was worn by the Regular Army. From research, their cap was similar to what the Horse Guards wore but was red with white piping instead. Unfortunately there are no surviving examples nor photographs so this may be speculative. I doubt very seriously it would be worn in combat - but it looks cool on the tabletop! 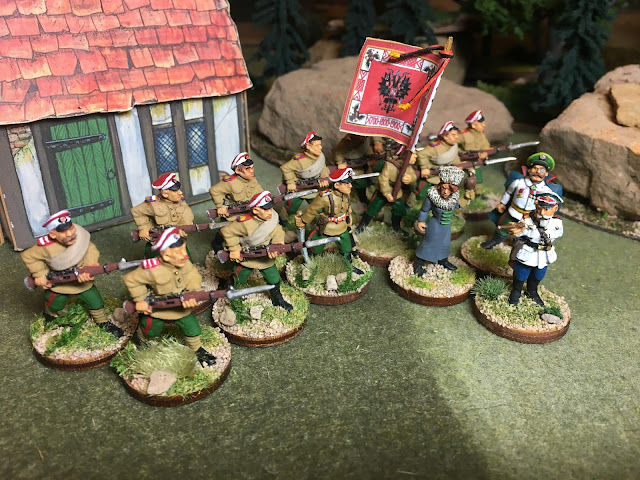 The Imperial Guard during inspection. 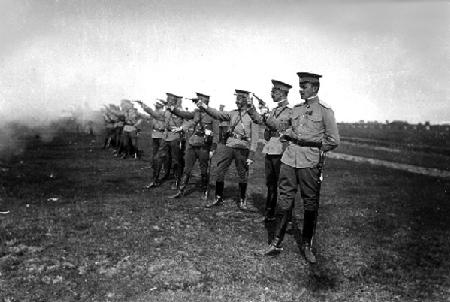 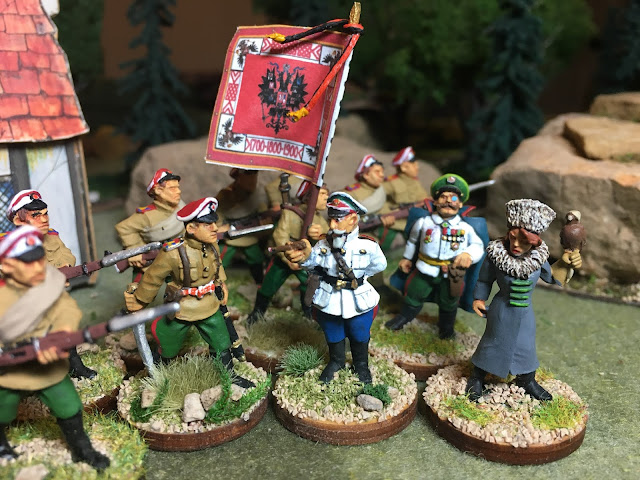 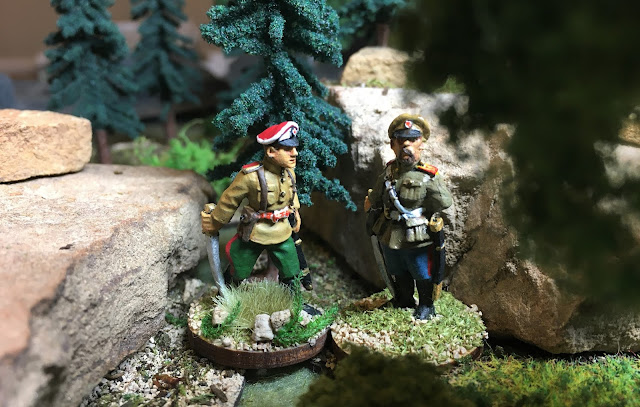 Email ThisBlogThis!Share to TwitterShare to FacebookShare to Pinterest
Labels: Colonial Gaming, Copplestone Castings, Imperial Russian Army Colonial Era, In Her Majesty's Name, Military History, The Men Who Would be Kings, The Russian-Anglo War