The Anglo-Russian War: Seize the Bridge (The Preview) 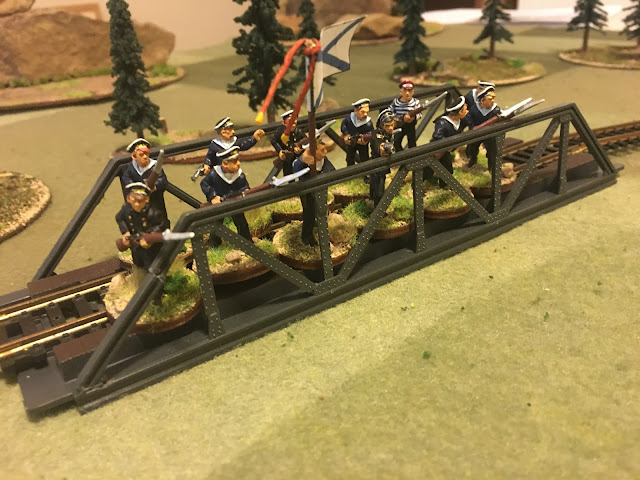 Our second major battle of the Anglo-Russian War using the rules The Men Who Would be Kings will be the Scenario "Seize the High Road". Simply put the defender has an objective to protect and the attacker must seize it. The rail systems in Central Asia and India were critical for both the Imperial Russians and the British Indian Army so we thought seizing a key bridge would make and ideal scenario. The British Indian Army would be the Attackers and the Imperial Russians would be the defenders. 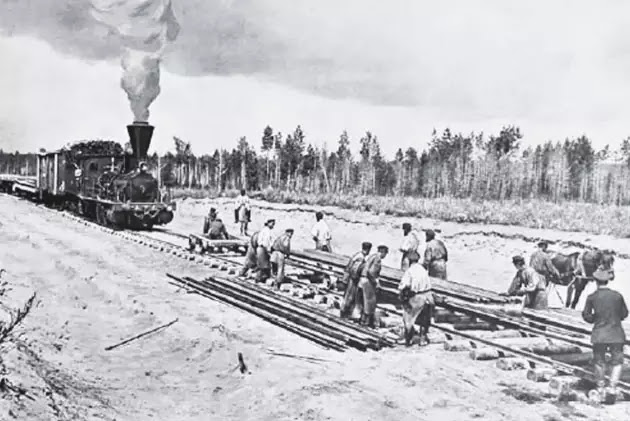 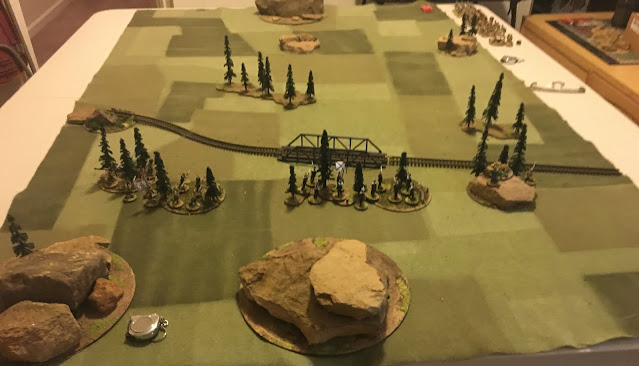 The battle will be fought lengthwise on a 6' x 4' playing service. The Russians as the defenders set up first in their third of the field and can be equal to or behind the objective. The British Indian Army will set-up second with at least one figure from each unit touching the edge of the battle field. Forces were actually deployed after we rolled for Leadership. In addition we added an optional rule: if a leader becomes a casualty, the next in command will take over, roll for a Leadership Value but will have no Leadership Trait. For British Units and Russians it will be an NCO and for the Indian Units it will be the ranking Indian officer.

The British Indian Army has now deployed.
One of the items I love about The Men Who Would be Kings is that you might have the Queen's Grenadier Guards on your side, but you don't know what kind of leader is leading them until after you have organized your field force. For this scenario the British Indian Army (the Attackers) get 24 points and the Imperial Russians get 18 points with some soft cover to make up for having a smaller force. The British Indian Army went with 3 Regular Infantry units (18 points) and 1 Machine Gun with well drilled crew (6 points). The Imperial Russians went with 2 Regular Infantry Units (12 points) and 1 Machine Gun with well drilled crew (6 points). But the Russians had some adjustments; the 21st Frontier Guards, a veteran unit, received the upgrade of Fierce (7 points) to make them better in hand to hand and the Naval Brigade was given Poor Shoots (5 points) to reflect Russian firing doctrine of concentrating on Volley Fire. What I like about the force composition that one of the major missions of the Independent Frontier Guard Companies was to guard rail lines.
Okay, too make things easier I made some unit cards with the stats and quick recognition with Microsoft Powerpoint. When we rolled for the Leadership Value (LV) and Leadership Trait (LT) for each officer we just wrote it down on the unit cards. For the Battle Report I went back and typed in the information. So . . . what kind of officers do we have? The British Indian Army went first. A good start for the British Indian Army: He's the Major General's favorite nephew and gets a free upgrade for free. He chose Sharpshooter. The LV is above average. 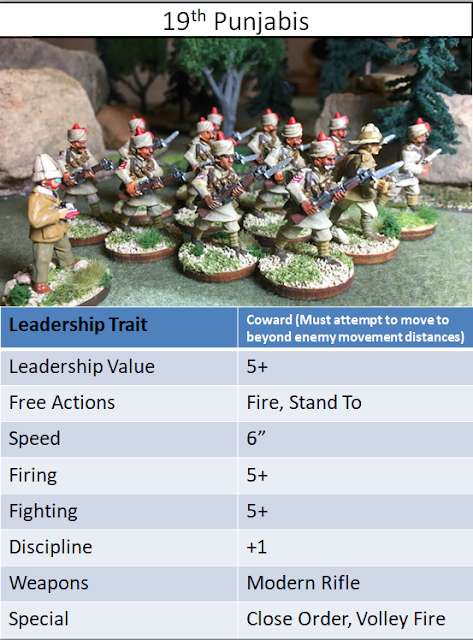 Yikes! Obviously no stiff upper lip; at least he has a great LV. I'm getting the feeling that this unit will be in a fire support role - it will definitely not be seizing the bridge. 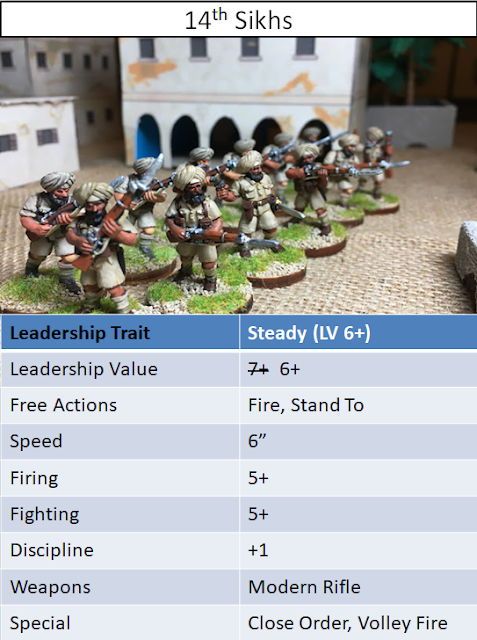 A good steady officer which made his LV a better 6+ instead of a 7+. 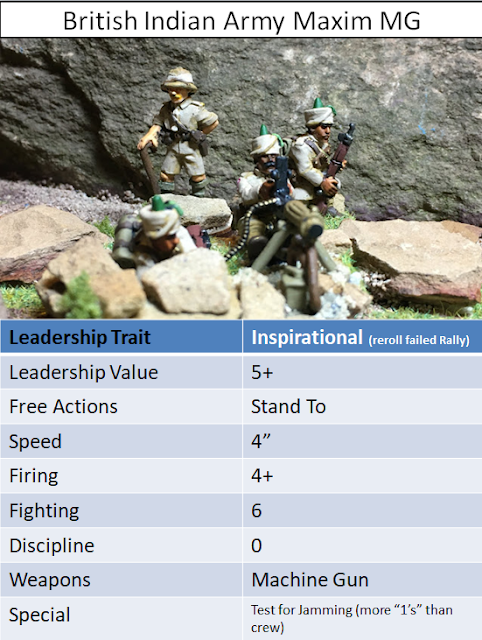 Not bad for the British Indian Army with the exemption of the "Coward" leading the 19th Punjabis. Now for the Russians. 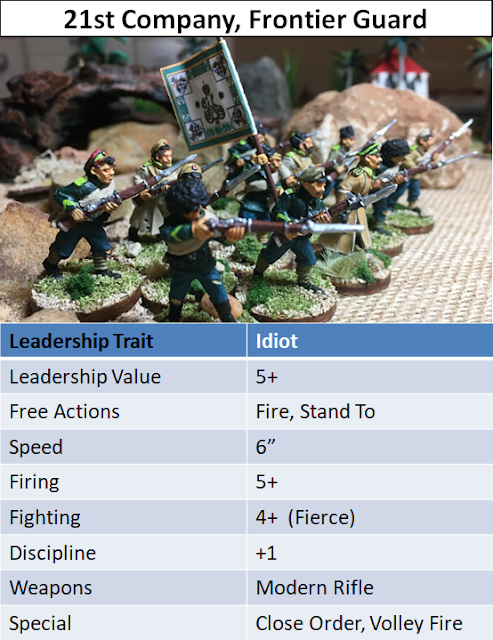 You have got to be kidding me! (Want to guess who is commanding the Russians?) With the Leadership Trait of "Idiot" every time the 21st gets ready to activate an order, roll one die and if it is a "1" your opponent chooses what order they will receive if they activate. They cannot shoot at or attack their own side. Well, a 1 in 6 chance with a good LV. We'll see. Thank goodness firing is a free action. 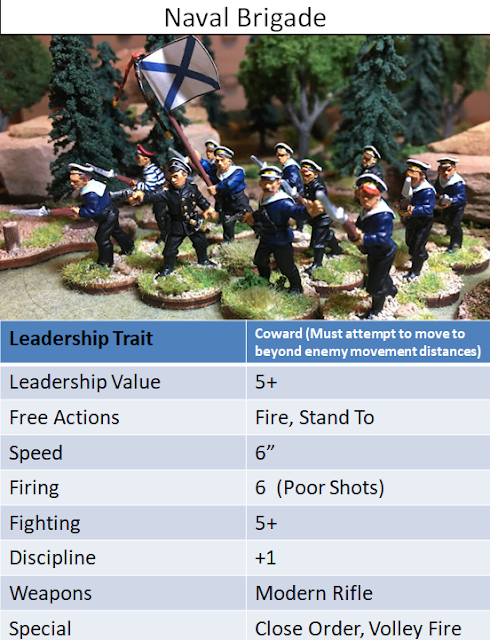 Oh this just gets better and better. Good LV - they better do some great shooting. 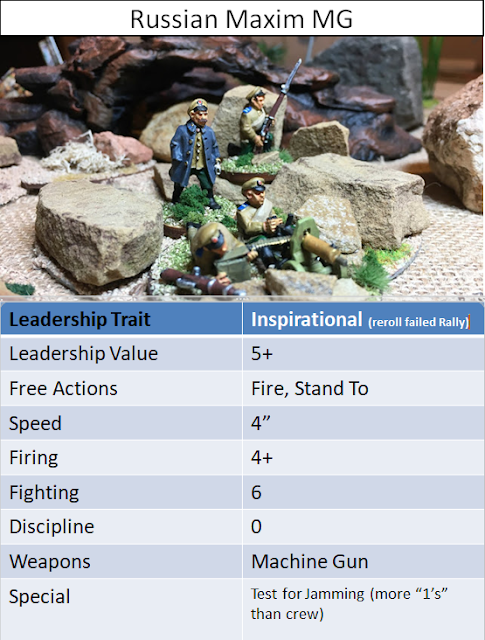