“Hither came Conan, the Cimmerian, . . . and he needed a bigger base." 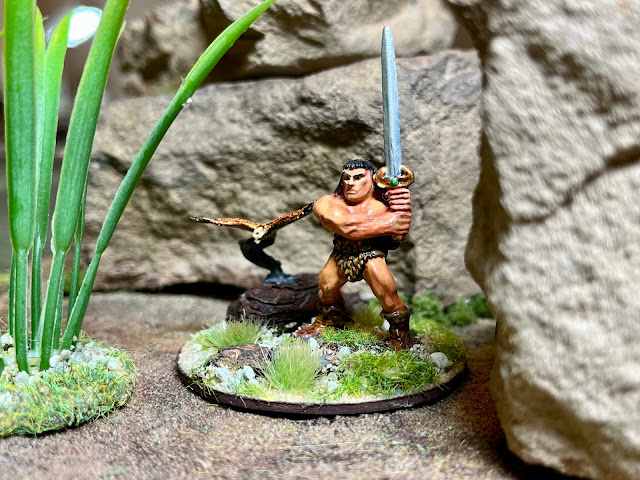 “Hither came Conan, the Cimmerian, black-haired, sullen-eyed, sword in hand, a thief, a reaver, a slayer, with gigantic melancholies and gigantic mirth, to tread the jeweled thrones of the Earth under his sandaled feet.”
Come on . . . admit it! You read Conan as a kid and loved it. Sure, Robert E. Howard was a product of his times - but it's Conan!
A while back, a long time back, a friend gave me a copy of the old Milton Bradley/Games Workshop board game Hero Quest.  I dusted it off recently to paint the figures with a mind toward doing some dungeon crawling . . . and then I purchased Dragon Rampant.  How could I not have everyone's favorite barbarian join the fun?
The Barbarian hard plastic figure is relatively easy to paint. For the skin I gave it a base of Vallejo Dark Flesh followed by a wash of GW's Dwarf Flesh and then some lighter highlights.  Everything else were various browns and of course the hair is black!  I initially painted the base for the dungeon environment of Hero Quest. 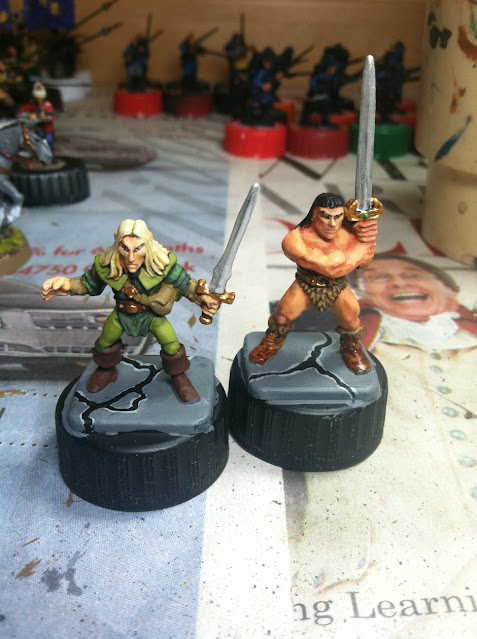 Barbarian and Elf Hero.
Once I decided that he would definitely have to be in Dragon Rampant, I mounted Conan on a 40 mm round plastic base so he would have a slightly larger footprint on the battle field. A few weeks ago I was looking at the figure and said, "Nah nah, that stand needs to be bigger. Here is how I did the original stand: 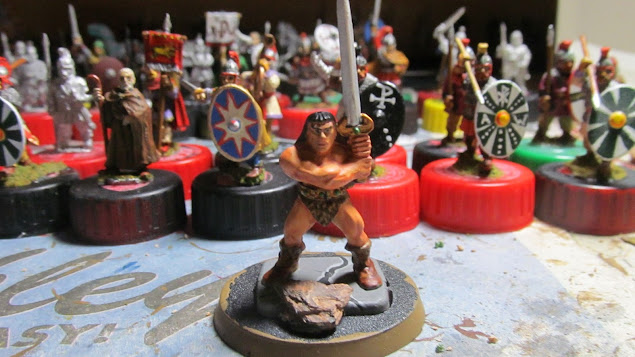 The rock is from my gravel rock path in the backyard. 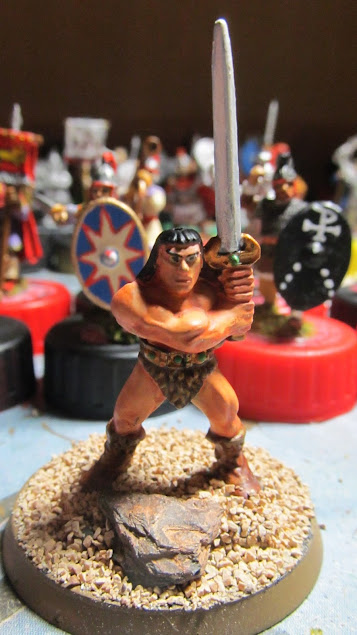 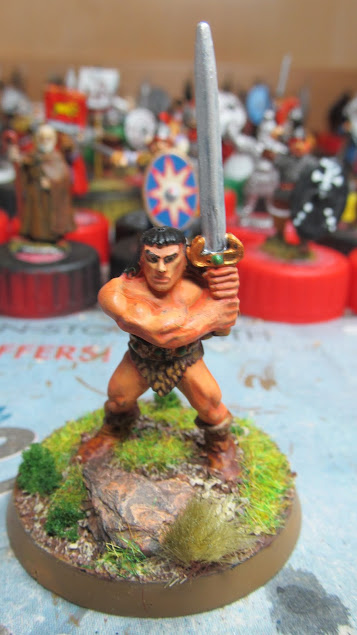 . . . then paint the sand dark brown and dry brush with flat brown then buff. 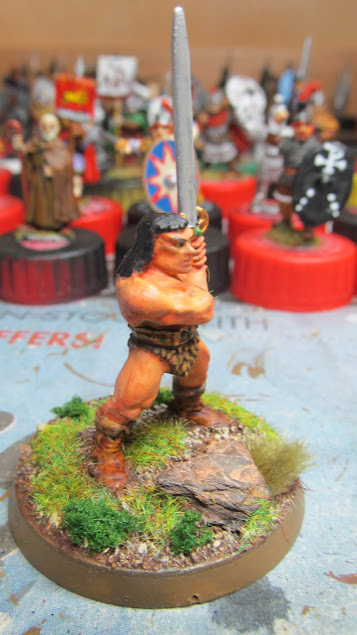 Add some static grass, a bush and some lichen and we are done. 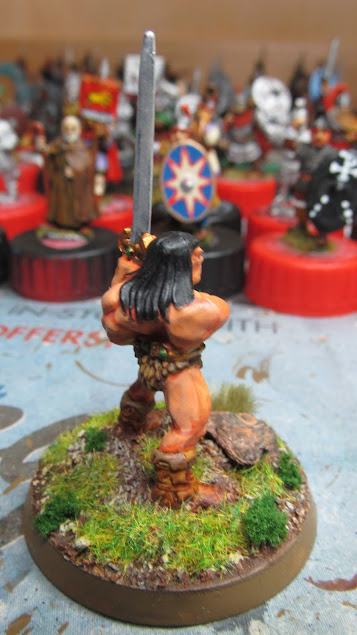 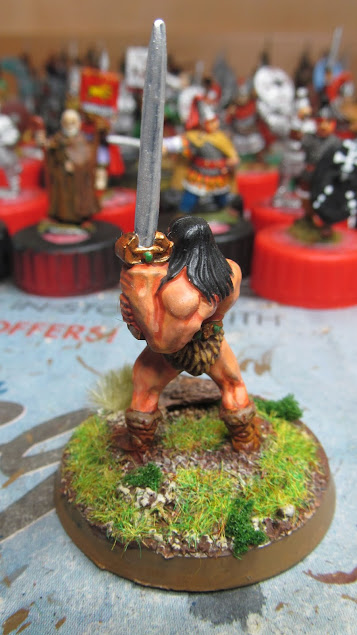 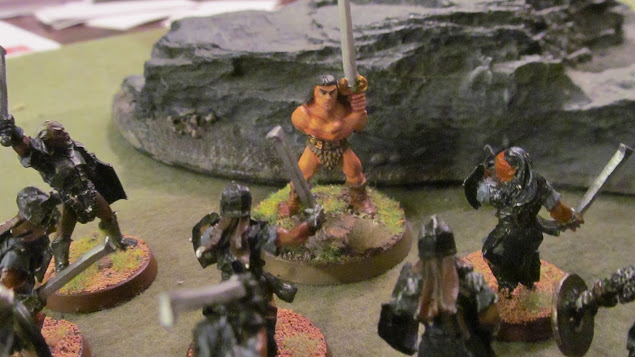 Conan in Middle Earth fighting some GW Uruk-hai from their LotR range.
Now that he is on a 60mm base, I think he looks even more impressive.  For Dragon Rampant Conan is definitely going to be Elite Foot with the Special Ranger rule and fielded as a single unit model unit or adding a few others and as a reduced model unit.  In addition I'm going to give him the Fantastical Rule of "Fear" for 2 points for a total cost of 8. Let's face it, do you really want to face him? The bird of prey is from the Reaper Bones range; I think it was in the pack Animal familiars - I think it adds a nice touch and fills up the base. 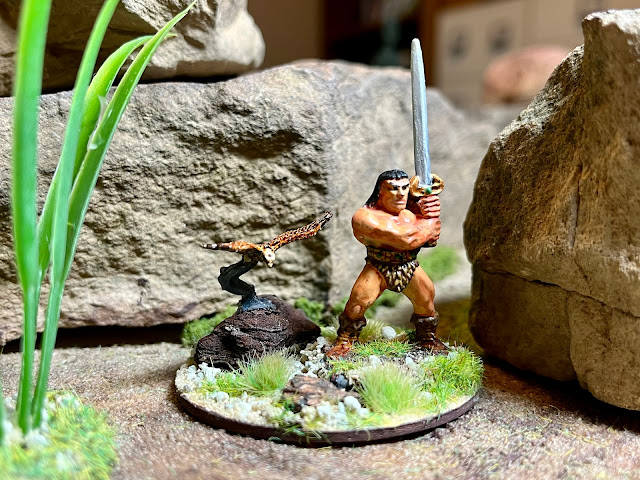 "Selim, are you sure it was not a murderous, mummified rabbit?" asks Kevin O'Connell, ace reporter for The Daily Yell. From an... 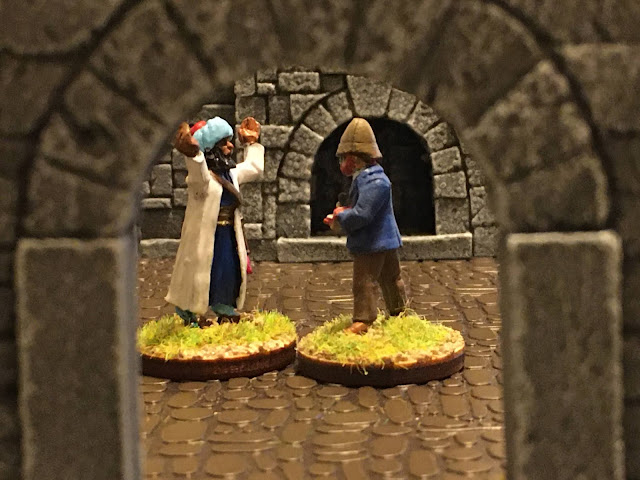