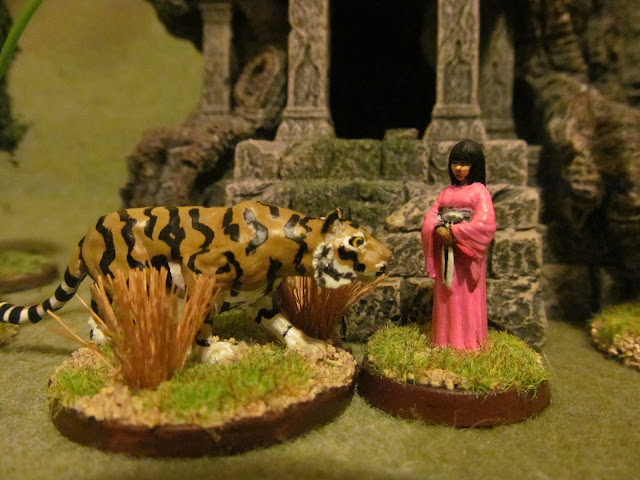 Another nice figure set from Pulp Alley is Yingyin and Shadow, which like all Pulp Alley miniatures, come with character cards for the Pulp Alley game. In the Pulp Alley canon, I believe Yingyin is the daughter of the notorious Dr. Fang, who looks remarkably like my own miniature Evil Genius who wants to take over the world, Dr. Fu Manchu. So until I start playing Pulp Alley, for In Her Majesty's Name, she is going to be Fah Lo Suee, the evil daughter of Fu Manchu. 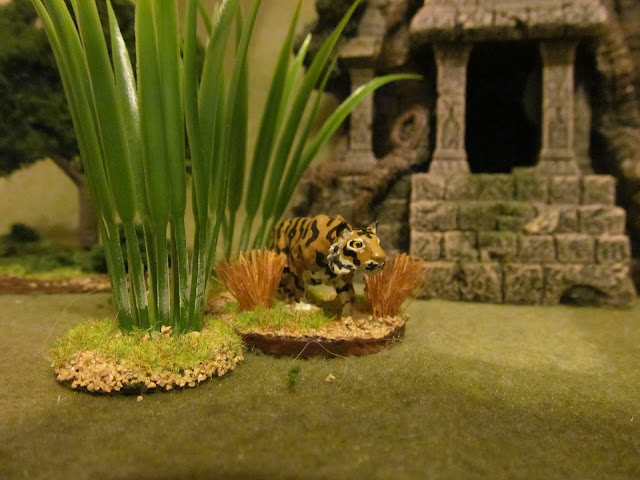 Never painted a tiger before. The paint job is not great, but it will do for my purposes.

Fah Lo Suee, is a devious mastermind in her own right, frequently plotting to usurp her father's position in the Si-Fan and aiding his enemies both within and outside of the organization. Her real name is unknown; Fah Lo Suee was a childhood term of endearment. She was known for a time as Koreani after being brainwashed by her father (such a loving parent), but her memory was later restored. She is infamous for taking on false identities, like her father, among them Madame Ingomar, Queen Mamaloi and Mrs. van Roorden. 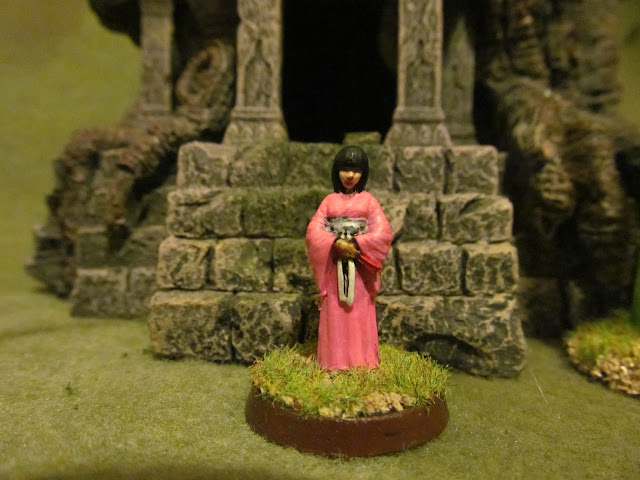 Fah Lo Suee is hypnotically seductive, and possesses powers of hynopsis enhanced by the ruby eyes of the Golden Beetle and mimosa gas, as well as longevity, due to the Elixer Vitae. Her voice and movements command attention, and her eyes can entrance a man in moments.

Fah Lo Suee Special Rule: Treacherous! Any company that Fah Lo Suee is a member of can be betrayed. If the Leader is removed from the game, she will immediately switch sides (that was her plan all along!) taking her tiger with her if the tiger is in the game. If she is with Fu Manchu and he is removed from the game her leadership increases to +2 and she takes over her father's company. If any leader in a company fails a pluck roll, Fah Lo Suee must also roll pluck; if she fails she switches sides along with her tiger if the tiger is in the game.

Game statistics for tigers can be found in Heroes, Villains and Fiends. 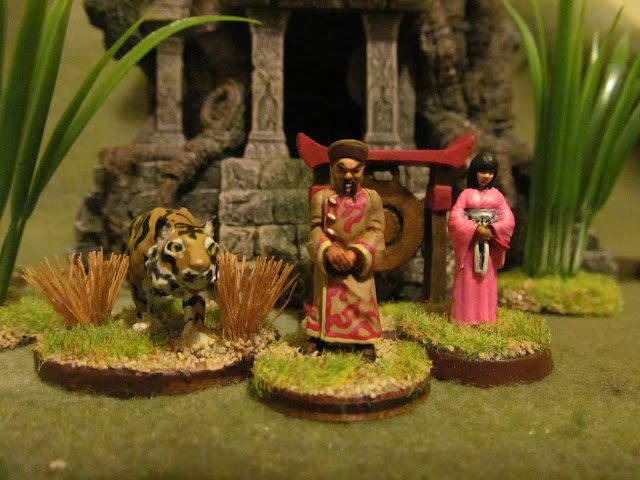 Email ThisBlogThis!Share to TwitterShare to FacebookShare to Pinterest
Labels: Evil Geniuses who want to Conquer the World, In Her Majesty's Name, Pulp, Pulp Alley, Pulp Figures