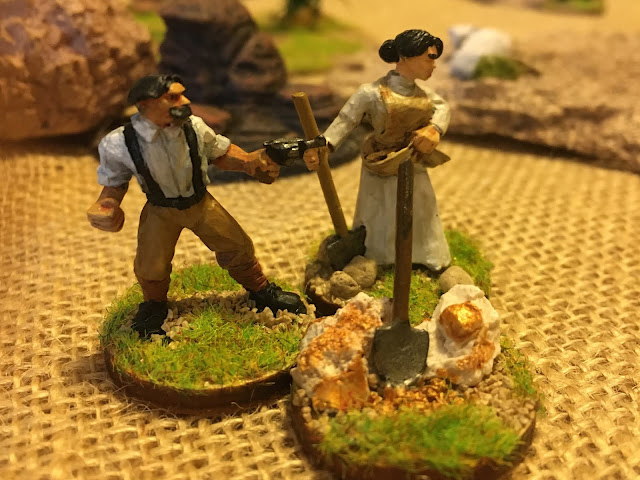 Egypt overrun with babbling idiot tourists. Women are the worst. Why the devil don't they stay home? This one had the audacity to shout at me after I stopped her handling the artifacts. Walter made me come away. Walter made me go to dinner. Bloody place. Said I owed the lady an apology. Nonsense. She is as swarthy as a gypsy and as opinionated as a man, black hair, eyes like daggers. Admirable figure though. I cannot imagine why I am wasting paper and ink on the woman. Tomorrow we leave for Amarna. I'll never set eyes on her again - Excerpt from the Unpublished Journal of Professor Radcliffe Emerson, January-February 1885

Our "Egyptian Adventure" is centered on the adventures of the unconventional female Egyptologist Amelia Peabody Emerson, and an ever-increasing number of family, friends, allies, and characters both fictional and based on historical figures.

Amelia Peabody is a confirmed spinster, suffragist, and scholar, living in England in 1884. She inherits a fortune from her father and leaves England to see the world, with the side benefit of escaping various suitors and family members who were neither aware that she would be the sole beneficiary of her father's estate nor that he had amassed a small fortune over the course of his lifetime. 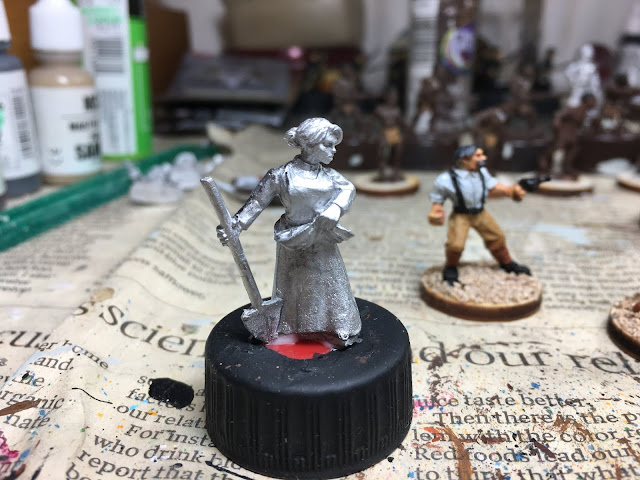 The figure I choose from Wargames Foundry to be Amelia Peabody.

In Rome, Amelia meets Evelyn Barton-Forbes, a young Englishwoman of social standing who has run off with (and subsequently been abandoned by) her Italian lover, and the two make their way to Egypt. There they meet the Emerson brothers, Egyptologist Radcliffe and his philologist brother Walter. The couples pair up: Amelia marries Radcliffe (always referred to his by his last name "Emerson"), and Evelyn marries Walter. The pair refer to each other by their respective surnames: Emerson refers to Amelia as "Peabody," using her first name only when he is annoyed with her. In turn, Peabody refers to Radcliffe Emerson almost exclusively by his surname, "Emerson", although some other family members call him Radcliffe. It is eventually revealed that he dislikes his first name as it was his estranged mother's maiden name. 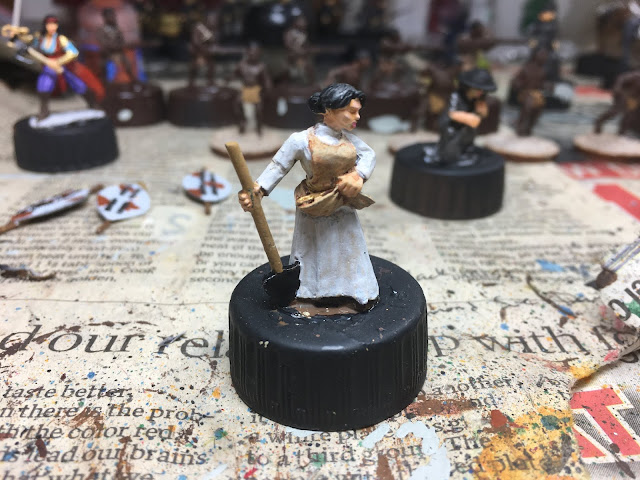 The colors white and black are always a challenge if you want it to look realistic at gaming distance. For Peabody's dress I started with Vallejo Buff, then Grey Green and then I highlighted the dress with Flat White. 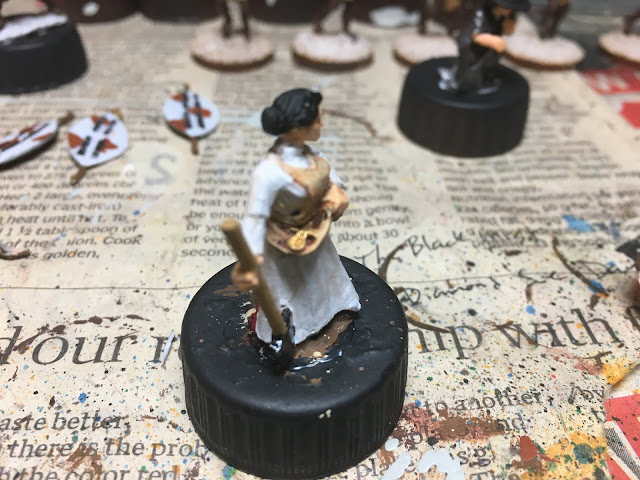 Her apron was quite simple: I used Buff and then carefully applied watered down Flat Earth as a wash to bring out the texture. I then highlighted using Buff again. The treasure she has found after meticulous hard work is just painted Gold. 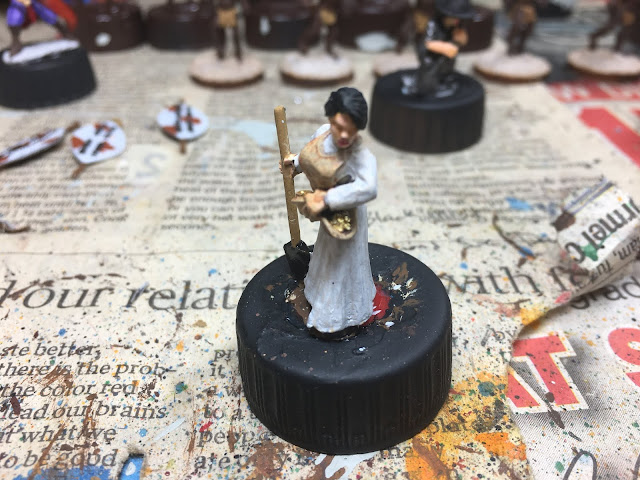 Amelia Peabody a head-strong, confident woman who capably ran her father's household and bullied local merchants in the course of bargaining. She has no patience with "helpless" women who play on their femininity to manipulate others into doing their will; i.e., "swooning, weak-minded females", according to Emerson. Peabody's first (and only) bilogical child, Walter, was born in 1887. Walter quickly became known as "Ramses" (definitely more on that later!), after Emerson remarked that he was "swarthy as an Egyptian and arrogant as a pharaoh."

Her name among the Egyptians is "Sitt Hakim", or Lady Doctor. This was given her when, soon after her initial arrival in Egypt, she showed such care for the Egyptians she encountered, particularly in treating a number of eye diseases—such as ophthalmia—that were common at the time. Her love for Egypt and its people is as deep and often reveals itself in her distaste for Europeans that view Egyptians with either condescension or disgust. 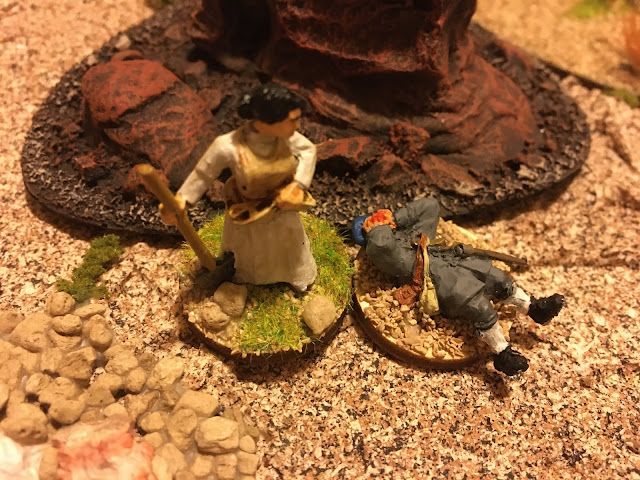 A horrifying discovery: (not that he is a 17th Century Scotsman) A dead body!

Because her family is frequently involved in stopping criminal activity, and she has successfully deduced facts of numerous cases, she views herself as an expert in such matters, to the point of denigrating truly competent law enforcement officers. And because some of the plots they have uncovered were in fact complex, she tends to make all solutions, even those not involving crime, complex and even outlandish while missing the obvious. Joined with her stubbornness, this tendency to over-analyze a problem frequently leads to her holding an incorrect belief far longer than is safe for her or her family. 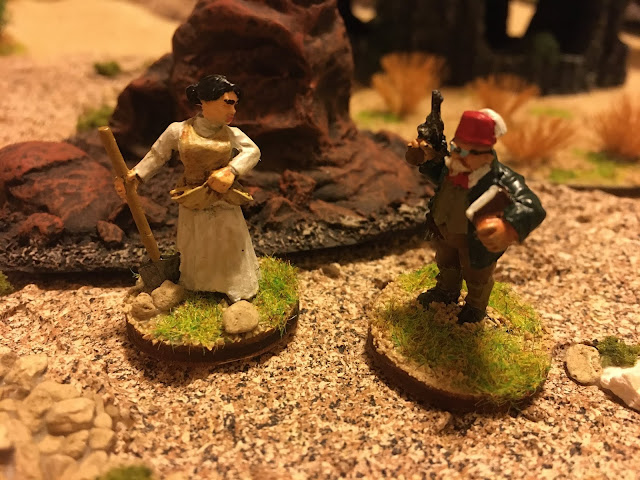 "The body was right here Inspector!"

Here are some stats for Amelia Peabody using the 1st Edition of In Her Majesty's Name which can be easily converted to other Pulp or Colonial skirmish games:


Move: 6"
Pluck: 3+
Leadership: +1 (only to native Egyptians, Household staff, Emerson if he has been knocked down, close friends, and anyone she can intimidate into helping)
Speed: 0
Fighting Value: +1
Shooting Value: +0 (Though she carries a small pistol, she is a terrible shot and rarely makes an effort to improve her skill, laughing off Emerson's suggestions that she could do more harm than good. Unfortunately, on more than one occasion she has come close to harming a member of the family while wielding the pistol, rarely blaming herself for the near miss. Amelia gets an additional -1 if she shoots into a group.)
Talents: Erudite Wit, Medic, Intuitive, Meticulous Planning
Basic Equipment: Pistol, Knife, Magneto Static Waistcoat, Magneto-Static Rapier Umbrella, Carbide Lamp.
Armor: 11
Cost: 54 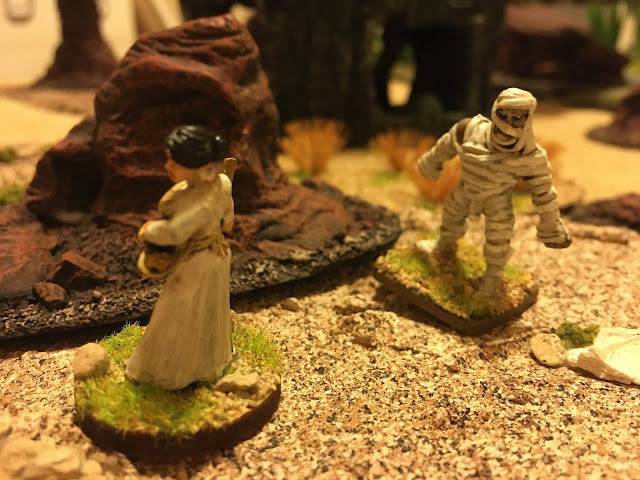 "Now where did that body go?"